A great model that has a long-lasting design.

The self-sharpening aspect works really well even after extended periods of use. Powerful enough to limit kickback. Easy to adjust tension on the chain. Surprisingly quiet for a tool of its size.

The chain can sometimes get slack in it when in use.

A high-quality option for a budget price that will cut down small trees, logs, and bushes.

It features an 8-amp electric motor running a 14-inch low kickback bar that will handle most small trees and logs. At less than 8 pounds, it won’t break your back during a long day’s work.

The 4-ounce oil tank that lubricates the chain has issues with leaking.

A top-notch choice that is perfect for clearing brush, trimming trees, or stockpiling firewood.

Blade sometimes runs off the track. Ideal for light and moderate jobs only. 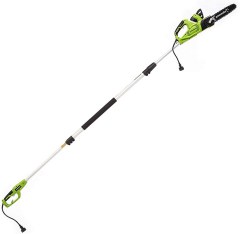 A superb option that is designed to start quickly and can serve you well for years to come.

Features a 6-amp motor that is proven to perform. Comes with a detachable extension handle for added convenience. Versatile model offers a wonderful choice for big and small projects alike. Easy to use time and time again.

Heavier than many comparable options. Does not come with instructions.

A lightweight yet durable model that is powerful enough for most jobs.

The plastic casing allows this model to be lightweight, which makes it great for extended sawing. Includes an auto-oiling system so that the chain stays well-lubricated.

Can start to overheat after long periods of use.

For the DIY enthusiast, a corded electric chainsaw is one of the best tools you can have in your workshop. For one thing, electric chainsaws aren’t nearly as loud as gas-powered chainsaws. For another, they weigh far less, allowing you to use them for longer periods without becoming tired.

Corded chainsaws offer several advantages over gas-powered and battery-powered models, but they can vary in their power and other features. They also vary in their safety features, like chain brakes and low-kickback designs. It’s important to understand what you’re investing in when you get a corded chainsaw, as these are powerful instruments that don’t come cheap. 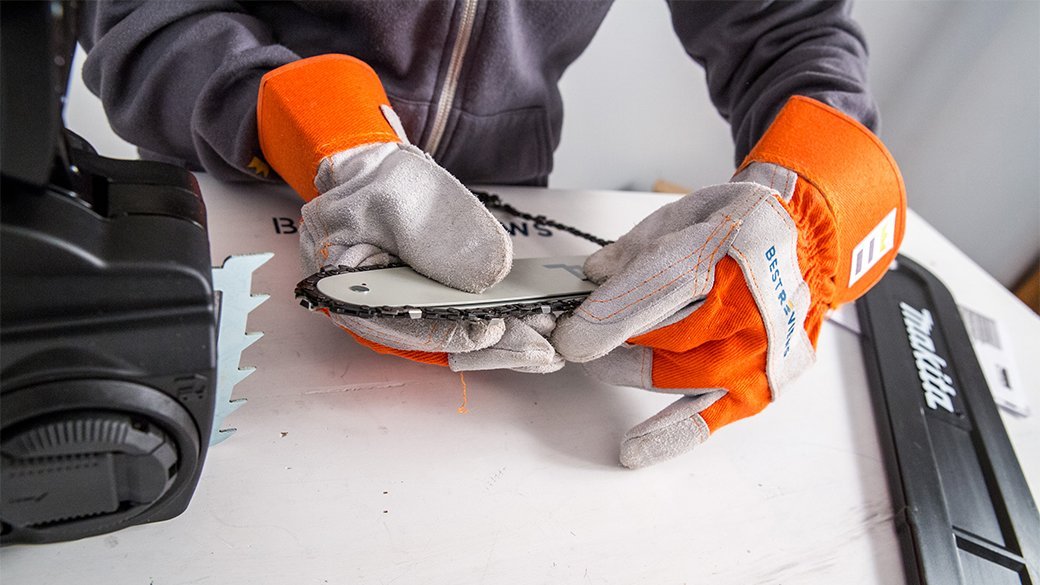 A 100-foot or longer extension cord is the best size to use with a corded chainsaw. It lets you reach the edge of your yard without having to string together three or four shorter cords. Bear in mind that you will need a lower-gauge cord than your shorter extension cords to power your chainsaw.

What are you cutting?

When people think of chainsaws, they often picture a Paul Bunyan kind of guy with a big, loud chainsaw cutting down giant trees in the mountains of Alaska. While that may be true in some cases, most of us are a little less ambitious. We’re just trying to trim a few branches off the trees in our backyard or take down some saplings before they get too big.

If that’s you, a corded chainsaw is exactly what you need. Electric chainsaws are lighter and less powerful than gas chainsaws. They’re also less dangerous and have a lower chance of kickback.

Where are you cutting?

Are you cutting limbs and small trees in your backyard or out in the woods? The latter requires a gas chainsaw. If you’re cutting within a reasonable distance around your house, an easy-to-start electric chainsaw is generally a better option than a gas chainsaw.

How often do you need a chainsaw?

Gas chainsaws don’t do well if they sit unused for long periods. If you will only be using a chainsaw on an occasional basis, a corded one is the best choice. You can pull it out when you need, start it up, then store it again when you’re done without worrying about anything besides the oil level.

Battery-operated chainsaws have become more efficient and popular than ever. They have some wonderful features, not the least of which is that you can take them almost anywhere. You are only limited by the battery.

Corded chainsaws are restricted by the length of your extension cord, but they can run for hours without stopping, and they will have consistent power output. If the annual cleanup in your yard is an all-day job where batteries just won’t last, a corded chainsaw is your best option.

Even electrical chainsaws vibrate when they’re cutting through wood. The tougher the wood, such as oak or maple, the greater the vibration will be. After a while, it can become very painful on your hands. Rubberized grips on the handles give you extra padding to help with it. If you plan to work for long stretches, this may be an essential feature.

Chainsaws drink oil the way we breathe air. They are constantly using it while the chainsaw is running. If the oil runs out, the chain could stick in the wood or overheat. A window into the oil tank gives you a way to visually check on the oil level while you’re working without a significant interruption.

Kickback occurs when the moving chain on the tip of the bar strikes something and the end of the bar suddenly jumps up in the air. It can also happen if the wood you’re cutting pinches the bar. In either case, you lose control of the chainsaw while the chain is running. This is when most life-threatening injuries occur.

A chainsaw with a low kickback means it has been designed to run at slower speeds with less power. It also means it uses a chain that is designed with different teeth so it doesn’t catch as often are regular chains. The flip side is that it doesn’t cut as well. Kickback is dangerous and happens to everyone sooner or later. If you’re comfortable with using chainsaws, you can get one that isn’t a low kickback design. If this is your first time with one, stick with a low kickback chainsaw.

A chain brake is a way to stop the movement of the chain without stopping the motor. Normally it is a handle that you squeeze along with the regular handle. The moment you let go of it, it stops the chain. Most corded chainsaws have them, but you should double-check the manufacturer’s specifications to be sure.

As you use a chainsaw, the chain will gradually loosen and begin to sag. You have to tighten it with the tensioner. Some tensioners require you to use a screwdriver or a special tool. Others, described as tool-less, allow you to re-tension the chain without the use of any tools.

Chainsaws are dangerous pieces of equipment. You can injure yourself in a split second if you’re not careful, so don’t take any chances. We urge you to invest in some safety gear.

Safety glasses: 3M Virtua CCS Protective Eyewear
Flying pieces of wood and sawdust can hit you in the eye, causing permanent damage to your eyesight. Safety glasses are a necessity when operating a chainsaw. This popular pair is designed to help keep earplugs in place.

Steel toe boots: Timberland PRO Men’s Pit Boss Steel Toe Boot
If you drop a chainsaw it is going to be headed straight for your feet. Lumberjacks always wear steel toe boots when they’re working, and you should too. This rugged boot from Timberland is likely to last you through several seasons.

Chainsaw chaps: Forester Chainsaw Apron Chaps with Pocket
These have layers and layers of tough parachute cord inside them. If a running chainsaw blade drops onto your leg, the cords will grab the blade and stop it before it cuts your leg off or even breaks the skin. On average, five people are killed every year by chainsaws cutting into a major artery in their leg. This apron-style pair from Forester is comfortable and has saved the lives of several customers.

Chainsaw oil: Oregon Chainsaw Bar and Chain Oil
Chainsaws drink oil like nobody’s business. They have to keep the chain oiled so it won’t stick in the wood or overheat. Stock up when you get your chainsaw and you can probably get the shipping thrown in for free. This oil from Oregon works well on most chainsaws and shines in sub-zero temperatures.

The low price range is between $40 and $50 for corded chainsaws. These are your basic no-frills models with short bars for very light cutting.

For around $50 to $90 are the majority of corded chainsaws. These generally have longer bars, more powerful motors, and extra features such as tool-less tensioners.

High-end corded chainsaws start at $90 and reach as high as $300. This is Paul Bunyan territory — these are heavy-duty chains with long bars and extra power for cutting through big trees. 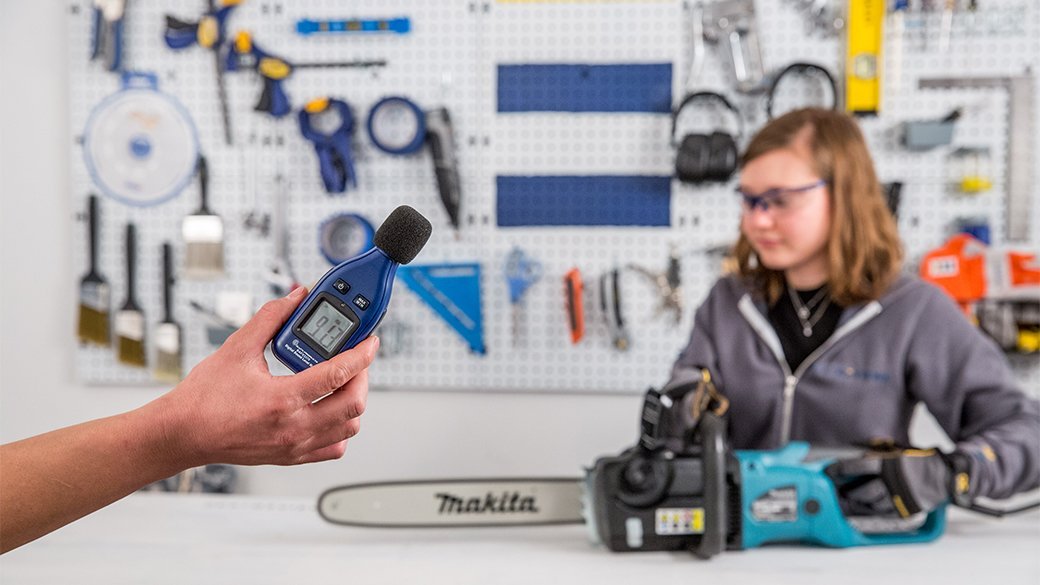 Always do your cutting with the chainsaw held at waist level. Bending over to cut puts you off-balance, which can be dangerous.

Q. How long can I use a corded chainsaw?
A. While corded chainsaws don’t get quite as hot as gas-powered models, they can still overheat. In most cases, this isn’t due to overuse but is instead because of a factor like low oil or a blunt chain.

Q. Can I use a corded chainsaw in the rain?
A. No. Using an electric anything in the rain is an invitation to trouble. 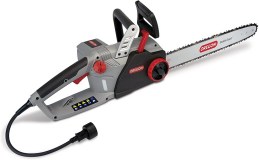 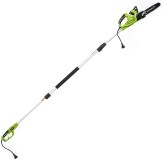