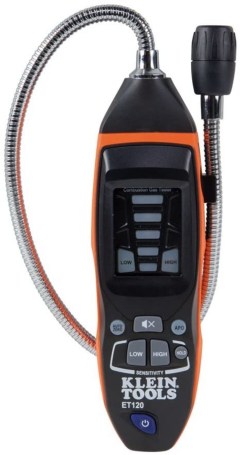 Will effectively let you know where a leak may be and how at risk you are.

Has a high and low setting for a more sensitive detection radius. The auto calibration feature makes it easy to set up and use. The device itself is easy to hold for an extended period of time. Includes battery and storage case.

The instructions make it hard to understand how far away you can be to detect gases. 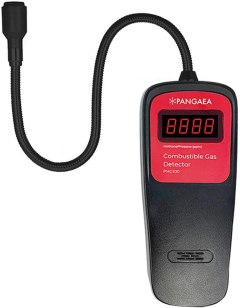 A great choice for those looking for something that is affordable and easy to use.

The compact size makes it easy to take with you and store. The digital screen gives an easy-to-understand reading. Can detect a wide variety of natural gases. The probe reaches up to 14" so it can detect from farther away.

The lack of a calibration feature makes it hard to understand if there is a problem with the device. 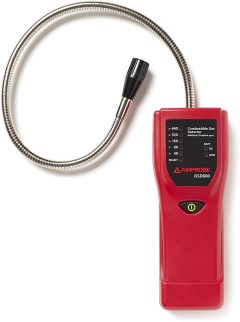 An excellent choice that works well at both detecting leaks and telling you how severe they are.

Beep alarms and an LED indicator alert you to a leak and show you how severe it is. Comes with AA batteries. Flexible, 17.5-inch stainless steel probe. Very sensitive detection of methane and propane. Comes with a hard carrying case.

Arrives with very little in the way of instructions or technical information. Sensor cap can break easily. Has a 10-minute shutoff, at which point you have to recalibrate it. 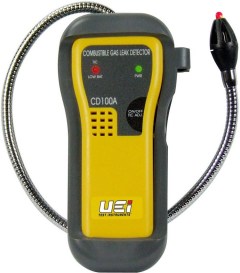 Can detect a number of gases and offers unique features such as the probe tip light.

The 18-inch probe has a light at the end of it to illuminate the area you're checking. Takes a 9-volt battery. Sturdy and well-made. A clicking noise and flashing red light indicate the presence and level of gases. Simple operation. Detects a wide variety of gases.

Some reports of the probe and control dial not being very durable. Light at the end of the probe would be more effective if it was white instead of red.

A professional-quality option that gives you the choice of visual, audible, or vibration alert modes.

Choose between 3 alert modes: visual, audible, or vibration. The 16-inch probe detects methane, hydrogen, hexane, and a variety of other gases. High-quality design. Simple to operate and understand. Uses 4 AA batteries. Comes with a zipper case.

Some buyers report problems with it either not detecting leaks or triggering way too easily. Initial calibration can be a little slow.

Gas leaks can be difficult to detect, and even minor ones can be dangerous if the gas is allowed to pool and collect or the leak is allowed to grow. This is particularly true for flammable or combustible gases like propane or methane. A combustible gas detector is an important tool for homeowners and building professionals to help detect even the smallest amount of gas leaking from pipes.

These detectors are usually battery-operated, handheld devices that are used to sniff out a wide range of gas types that collect in basements, crawl spaces, and areas such as behind your kitchen’s gas range. Plug-in types are used for continuous gas monitoring. 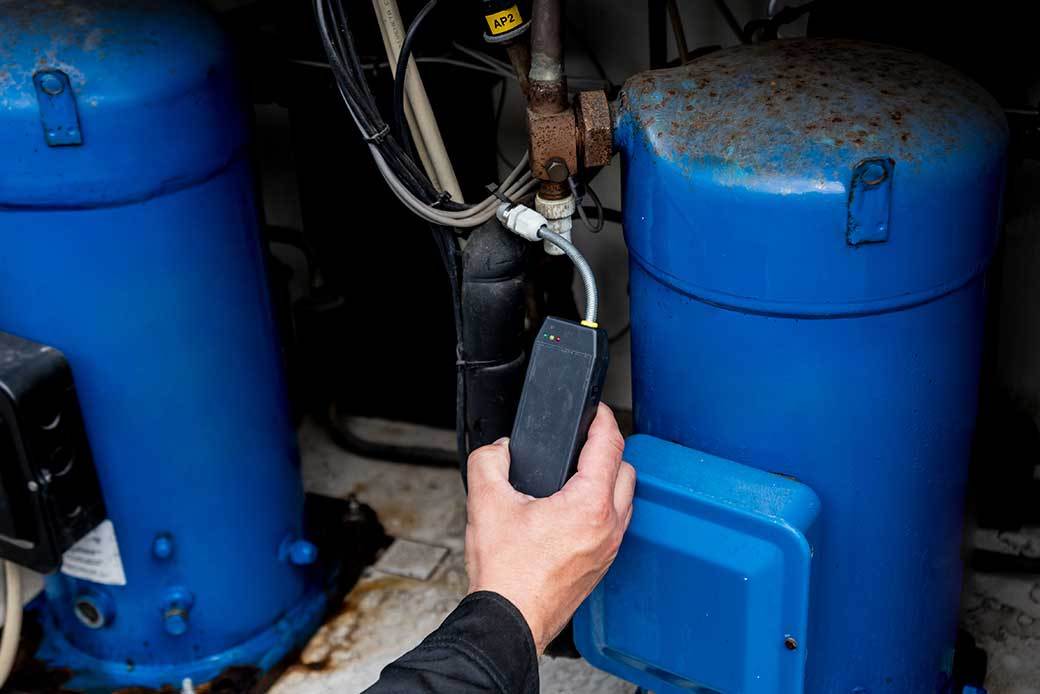 While most older detectors were designed to detect one type of gas, newer detectors can detect a variable range of combustible gases.

While detectors can use different methods to detect combustible gases — two of the most common are catalytic sensors and infrared sensors — they all essentially perform the same task. A detector samples the air for specific flammable gases. If the device detects the presence of a gas, it compares the gas concentration to a set level that is programmed into the detector. If the gas concentration surpasses that set level, the detector alerts the user

Probe detectors: These usually handheld, battery-operated devices are used to spot-check for gas leaks and gas buildup. Homeowners and professionals such as building inspectors generally use these to check for suspected leaks.

Plug-in detectors: These detectors are more like smoke detectors or carbon monoxide detectors (and some incorporate a CO detector). You plug these into an outlet and the detector monitors the air 24/7 for the presence of gas.

All elements of a combustible gas detector should be durable, particularly if it’s going to be carried around and used often. The housing should be rugged and ergonomically designed. The probe (if the detector is so equipped) should be constructed from a tough metal, such as stainless steel. Any dials, buttons, or knobs should also be sturdy enough to hold up over the life of the detector.

In general, the more gases the detector can sense the better. The type of gas varies from model to model, but some common ones that you will find listed include the following:

Controls: The controls are generally pretty limited on combustible gas detectors. In addition to an on/off button or knob, some also have sensitivity tuners or controls to toggle alerts.

Concentration indicator: While not all combustible gas detectors have the capability to tell you the concentration of the gas, most have some system — usually LED lights — to notify you of this, which can provide you with a quick idea of how severe the problem is.

Alerts: Alerts are the primary way a combustible gas detector informs you of the presence of gas. The available alerts vary from detector to detector. Determine which alerts particularly interest you and how much control you want to have over them (for example, turning them on/off, volume control) before choosing a detector. There are three different types of alerts for these devices: sound, light, and vibration.

Auto-shutoff: Some combustible gas detectors turn off automatically after a set period of inactivity (such as 10 minutes). This can help conserve battery life.

As a whole, these detectors are generally pretty simple to use, but some are easier to use than others. The best combustible gas detectors automatically recalibrate every time you turn them on (warm-up times vary from a few seconds to a minute or more). Others require you to recalibrate the machine by hand, usually by sampling fresh air and adjusting the sensitivity of the device.

The probe is generally flexible and can vary in length from 12 to 18 inches. The longer the probe, the more areas you’ll be able to reach to sample the air. Some probes include a built-in light so you can illuminate the testing area. Some detectors include a cap to protect the probe tip when not in use.

A carrying case or bag is handy to have for a combustible gas detector, both for portability and storage. The best type is a hard case with a strong method for securing it.

Combustible gas detectors start at around $30 and can reach up to $200 and more. There are two primary price ranges.

Inexpensive: In the lower range, from $20 to $40, you’ll find nearly all plug-in detectors in addition to simple handheld models.

Expensive: In the higher range, $100 to $150, you can expect to find detectors with a better build quality, increased sensitivity, and advanced methods and accuracy for reporting gas concentrations. 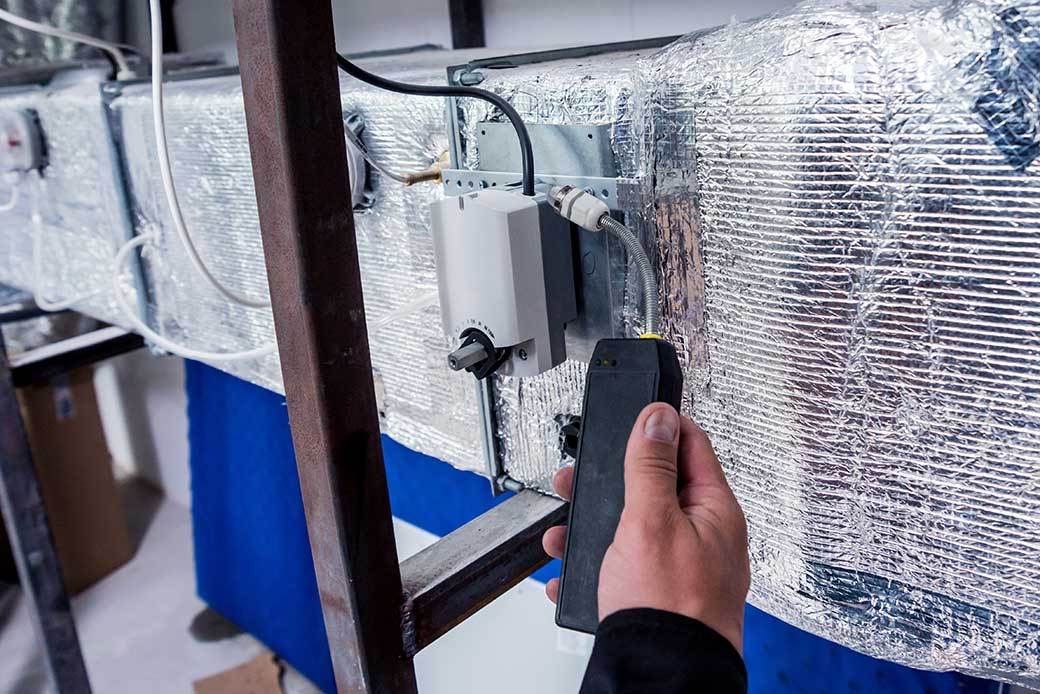 Combustible gas detectors generally only detect a gas and its severity but don’t tell you what type of gas it is.

Q. What’s the difference between a catalytic and an infrared sensor?
A. Combustible gas detectors typically use one of two technologies to detect gas: catalytic sensors or infrared (IR) sensors. Catalytic sensors are the primary way of detecting combustible gases in these devices. They feature a wire coil that oxides gas and passively reads the resulting resistance in the coil. IR sensors are the more active method. These transmit and receive light several times per second. When the light shines through a gas, the detector can determine this and note its concentration.

Q. Can these detectors sniff out sewer gas?
A. Yes, if the detector can sense methane. Sewer gas is a mixture of several different gases, including methane.

Q. Can these detectors be used continuously?
A. Probe-type detectors generally can’t be used in this way. These detectors are battery powered, and the batteries usually only last 8 to 14 hours. Some automatically shut off, which can preserve battery life but would be a real hindrance to continuous use. For continuous combustible gas detection, search for a plug-in model. 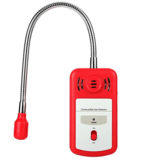