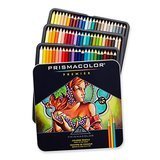 Tin case of 72 soft-core pencils for blending, shading, and layering. Softer and waxier than regular pencils. A top brand in colored pencils.

Some leads uneven or not numbered clearly. Quality-control issues with some sets.

Made from poplar wood, this 120-pencil set arrives in a 3-layered package. Good for adult coloring book use, as well as sketching.

Pencils sharpen easily, blend easily, and erase without smearing. Strong wax-based lead tips; easy on the fingers when using them. Pencils get into small spaces nicely when coloring or sketching.

Leads don't always match color on paper. Some colors too similar. May have odd, oily odor at first. 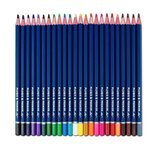 Carton of 24 professional-quality pencils. Good for adult coloring book users, as well as students. Nontoxic and safe for all uses.

Set comes in a box that's helpful for storing and organizing pencils. Nice array of colors that have a thick, soft, durable core to produce even work without grainy or wax-like finished appearance.

No color names on pencils. Some colors don't match leads. Hard to sharpen for some users. 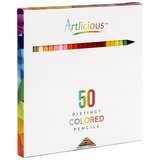 Set of 50 distinct colored pencils with the name of color on each pencil for quick identification. Pencils come pre-sharpened.

Pencils are made from non-rain forest wood. Thick, soft leads won't fall apart or break when using. Vibrant colors transfer well onto any kind of paper. Set includes a sharpener.

Not enough color selection for advanced users. Sharpener may not be adequate for some users.

Choose this set if you are looking for pencils with hard cores – then advance to a set that offers waxier, softer textures as you learn some artistic basics.

A pack of 60 with a design geared to novice and young artists, as the hardened cores are easy to control. Nicely pigmented colors. Earns praise for being easy to blend and shade. Trusted brand.

Although firmer than some competitors, the tips tend to crumble and break when sharpened.

From coloring within the lines to creating your own artistic masterpieces, the only thing that limits what you can create with a colored pencil set is your imagination. But not all colored pencils are created equal, and not all sets enable you to do every kind of coloring. Basic colored pencils are only really suited for coloring books or simple drawings, for instance, rather than blending and shading.

Unless you're already a colored pencil expert, it can be tricky to figure out which ones are right for you. Will your chosen colored pencil set meet your individual requirements, or will it end up gathering dust in the back of a cupboard?

We at BestReviews have compiled this in-depth shopping guide for colored pencil sets to make your purchasing decisions easier. Read on, and prepare to put some color back in your life. 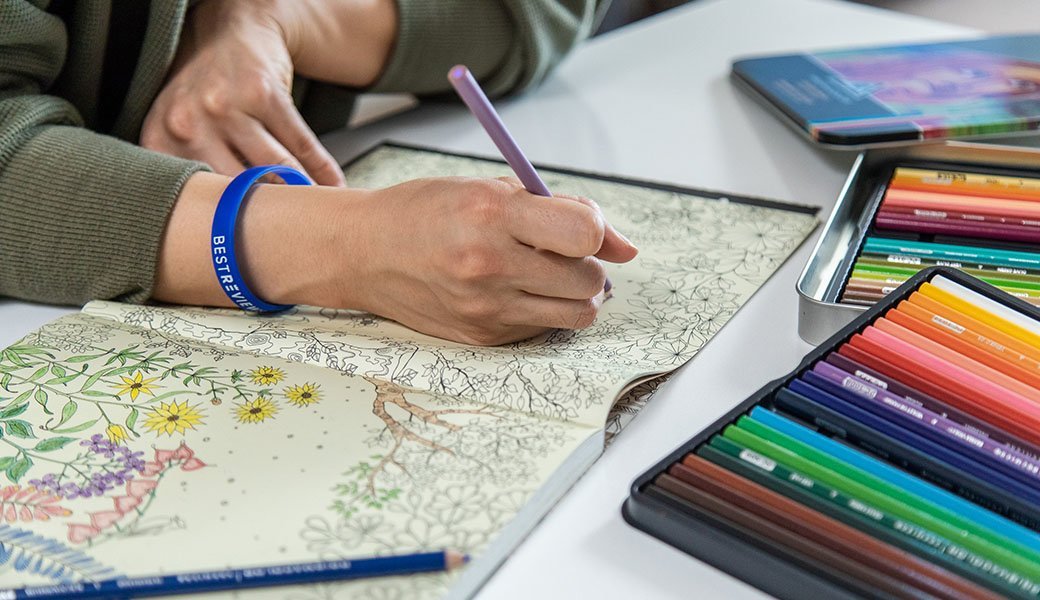 Some colored pencil sets contain duplicate colors, so a set of 150 pencils might only contain 100 different colors. Always check the number of colors you're getting before you buy.

The three varieties of colored pencils are differentiated by the binder used to hold the pigment together: wax, oil, and water.

The most common type of colored pencil, these use a wax to hold the pigment together inside the pencil. If you've ever bought colored pencils from a grocery store, they were probably wax-based, but that doesn't mean that only basic colored pencils are wax-based.

As well as the standard hard wax-based coloring pencils that you'll find in any elementary school classroom, you can also buy softer wax-based varieties for blending and layering. While these are popular and versatile, the wax can separate from the pigment and form a "wax bloom" on your work. This is more common with cheaper pencils.

Also known as "watercolor" or "water-soluble" colored pencils, water-based varieties can be used either wet or dry. When used wet, the gum arabic that binds the pigment dissolves, giving you an effect than looks much like watercolor paints. 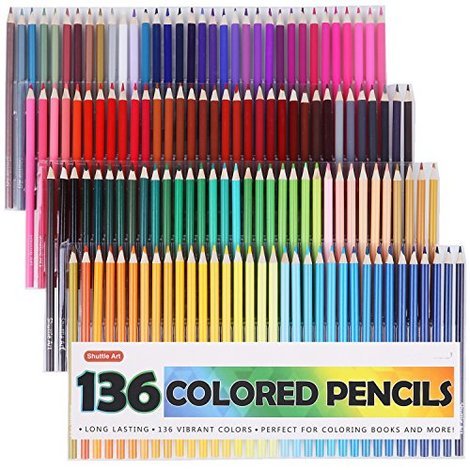 With 136 pencils, you get a huge range of colors – including metallics – with this Shuttle Art colored pencil set. While not professional grade, these pencils go on smoothly and are great for kids and coloring books. When you’re done, the pencils store neatly away in the included trays.

One of the first factors to consider is the range of colors included. Some sets have well over 100 colors, while others only have 20 or 30. If you only want colored pencils to use in coloring books or to create simple art, you might not need a huge range of colors. On the other hand, creating detailed or realistic artwork requires more colors. Since you can't mix colored pencils like you can paint, you might need more colors than you think. Of course, the more colors you require, the larger your set will need to be, which means you'll need to spend more.

The term “opacity” refers to how opaque or transparent the color is on the page. The greater the opacity, the fewer layers you'll need for good, even coverage. High opacity is also a huge benefit when using colored pencils on darker colored paper.

Colored cores in your pencils come in varying degrees of hardness. Harder pencils are good for fine detail but not so good for laying down large areas of color, layering, or blending. If you want to blend and layer colors, a softer pencil is your best bet. But soft pencils can be messier to use and require more regular sharpening.

Match the colored pencil set to the activity

When drawing with colored pencils, always apply the lighter colors first. It's easier to draw over a light color with a darker color, if necessary, than the other way around.

Try water-soluble colored pencils to get a watercolor effect.

It can be tough to compare prices of colored pencil sets because the sets vary in size. But you can compare sets by comparing the price per pencil. You can expect to pay between $0.10 and $3 per pencil.

Inexpensive: Basic colored pencils cost about $0.10 to $0.25 apiece. These are usually fairly hard wax-based crayons that are fine for kids or for simple drawing or coloring but may be lacking for artistic use.

Mid-range: Colored pencils in the middle of the price range cost from $0.25 to $1 apiece. You can find some very good options that blend and layer well enough for amateur and student artists for $0.50 per pencil.

Expensive: High-end colored pencils cost roughly $1 to $3 apiece. These are the colored pencils that professional artists use. The average buyer won't need to spend quite this much. 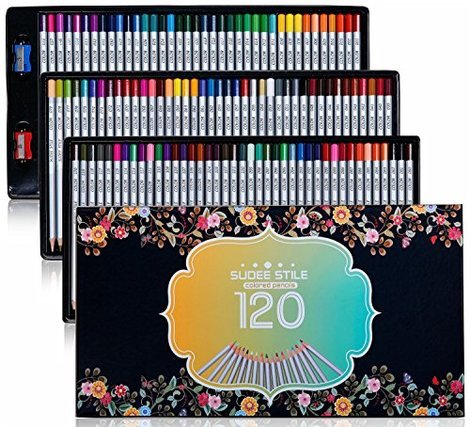 This Sudee Stile colored pencil set features a wide range of different colors. The sturdy cores lay pigment on smoothly, and the 120 vibrant unique colors blend easily – and all at an affordable price. 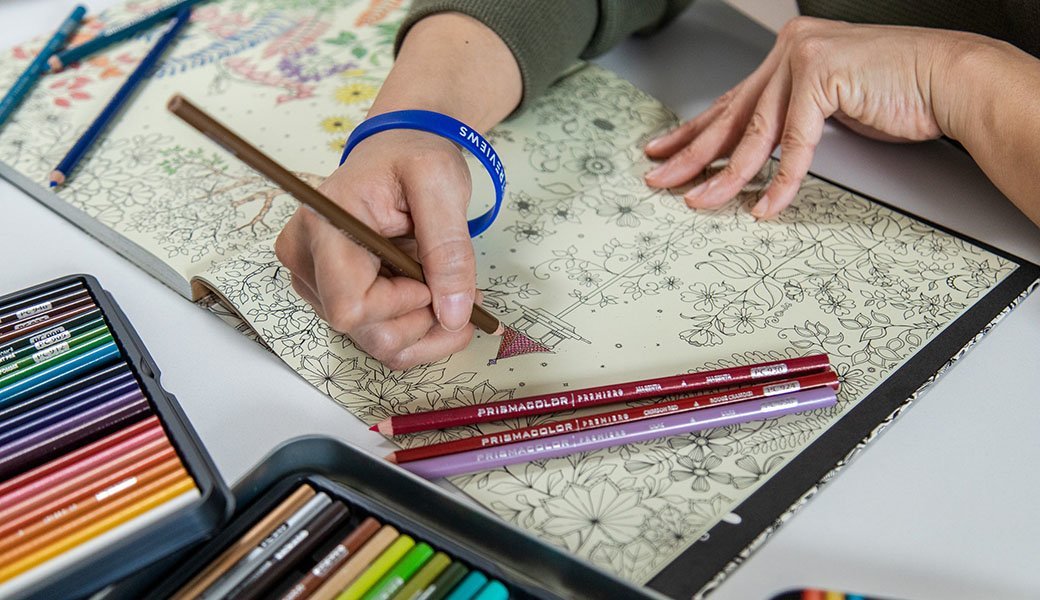 A quality set of colored pencils can be pricey, but remember that they're meant to last. They don't dry out the way paint and markers do, so a good set could last you for years.

Q. What kind of colored pencils are best for kids?

A. Young kids who are using colored pencils for simple drawings, scribbling, and mark making only need basic, inexpensive types. At this age, children often break or lose the pencils, so spending a lot on a high-end set would be a waste of money. However, if you have older kids who are showing an interest in art, we'd recommend buying a quality colored pencil set with fairly soft cores. These are much better for coloring and drawing and will give your child an opportunity to learn how to layer and blend.

Q. Where can I learn new techniques for drawing with colored pencils?

A. If you're a budding artist but don't know much about drawing with colored pencils, you'll be able to find plenty of resources online. You can find a wide range of drawing tutorials on YouTube, as well as websites with step-by-step guidelines and advice. 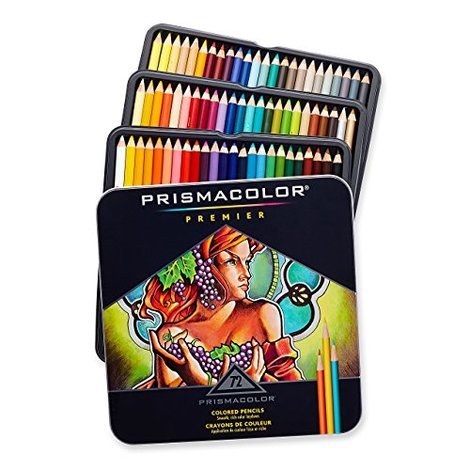 Tin case of 72 soft-core pencils for blending, shading, and layering. Softer and waxier than regular pencils. A top brand in colored pencils. 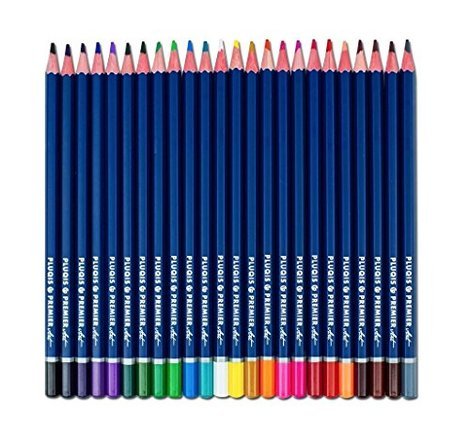 Carton of 24 professional-quality pencils. Good for adult coloring book users, as well as students. Nontoxic and safe for all uses. 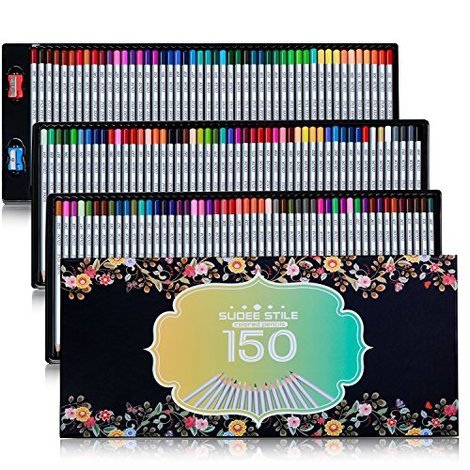 Made from poplar wood, this 120-pencil set arrives in a 3-layered package. Good for adult coloring book use, as well as sketching. 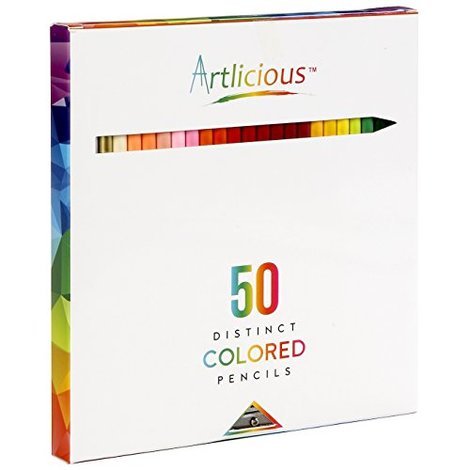 Set of 50 distinct colored pencils with the name of color on each pencil for quick identification. Pencils come pre-sharpened. 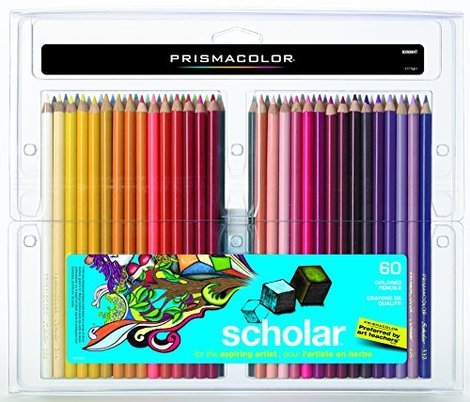 Choose this set if you are looking for pencils with hard cores – then advance to a set that offers waxier, softer textures as you learn some artistic basics.