A cleverly-designed, well-constructed, and powerful automatic pot stirrer that will save you time and energy in the kitchen.

It is cleverly designed to automatically adjust to just about any size pot. The device is sturdy and well-made, with good, consistent stirring action when fully charged (the rechargeable battery charge lasts about 4 hours) and a quiet motor.

The stirring speed is not adjustable and it doesn't work well with very thick mixtures.

A battery-powered stirrer with 3 speed settings that moves the device's silicone feet around the pot, preventing burning and scorching.

This device is small and simple to use, with 3 speed settings. Since it is placed directly in the pot, rather than secured to the sides, it can be used in any size pot. The stirring "feet" are made of food-safe silicone.

It requires 4 AAA batteries, which are not included with purchase. It sometimes gets stuck in one part of the pot. 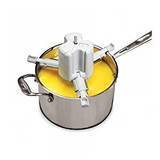 A battery-powered, hands-free pot stirrer with enough power to stir most sauces while you attend to other things.

This device folds up for convenient storage. It comes with 3 paddles in different sizes to accommodate different sized pots. It has two settings – one for constant stirring and one for intermittent stirring.

The stirring speed is not adjustable. It can be difficult to put on, remove, or adjust when the pot (and sauce) is hot. 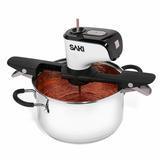 Rechargeable and highly adjustable, this auto-stirrer can handle everything from thin sauces to chunky chili.

Stirs at two different speeds. Two BPA-free stirring arms help keep your pan balanced. Adjusts to fit saucepans measuring 6" to 10.2" in diameter and between 4" and 8" high. Automatic stirrer is cordless and rechargeable - takes 4 hours to charge. Works with all kinds of pots.

Works well with a variety of meals, but some report that it may leave some cream-based dishes scorched.

Are you a multitasker in the kitchen? Does your arm get tired while stirring? Or do you simply want to cut down on monotonous tasks in the kitchen? If so, an automatic pot stirrer belongs on your short list.

These handy devices take the grunt work out of sauces, soups, grits, and stews. You may not be familiar with how they work or even what types are available but don’t worry, you’ve come to the right place. Our shopping guide dives into the considerations and features you’ll typically run into along with our top five picks. Stop stirring, sit back, and take a look at how you can cut down on your workload in the kitchen. 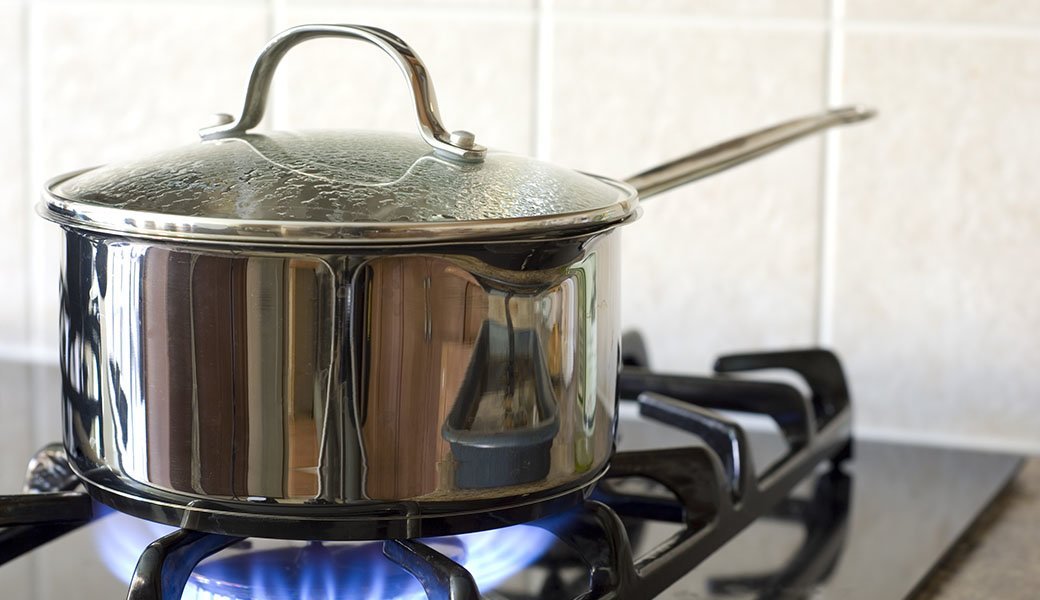 Some manufacturers offer a three or four-year warranty extension for only three or four extra dollars. If you're going to put the automatic pot stirrers to good use, it might be worth investing a few extra dollars to save on your investment.

Clean up
Models with dishwasher safe paddles are far easier to clean than those that must be hand washed. However, the motor, no matter the paddle type, should never be placed in the dishwasher. Instead, wipe it clean with a damp cloth.

Storage ease
Automatic pot stirrers can be awkward to store. Models with foldable or removable arms are more compact and easier to store.

Durability
Flimsy arms have no place on an automatic pot stirrer. Thick plastic, stainless steel, and rubber-coated paddles offer the best durability. When shopping, understand that some models are only intended for soups and thin sauces. If used for thick sauces or stews, the motor and arms may break down.

Pot width and depth
Automatic pot stirrers can be adjusted to different sized pots. You should still take a good look at the pots you own to make sure you buy a pot stirrer that will work for your cookware. Automatic pot stirrers can fit pots with diameters between six and fourteen inches, though not all models cover this range. Sometimes manufacturers list the pot stirrers size capabilities by quarts rather than diameter. In this case, the pot stirrer should fit a pot that holds an equal number of quarts. Depth is also an important consideration as come pots of equal capacity have different depths. Some automatic pot stirrers have greater depth adjustability than others. Keep in mind that if you want to use the automatic stirrer for a variety of uses and in different pots, you'll need one with several paddle sizes too.

Run time
Take a good look at the kind of cooking you want to do before buying. Automatic pot stirrers that can run three, four, or more hours can take the work out of foods that need to simmer for most of the day. Some smaller models have a battery that only lasts for 60 minutes or less, making them far less useful for serious day-long cooking.

Models with rechargeable batteries may include their own charging station. It can take up to four hours for the battery to complete the recharge. You may want to recharge after each use so that you're not left without your stirrer halfway through a recipe.

Design
There are two basic designs available – exterior clamp-on and interior mobile models. Exterior clamp-on models feature a motor placed in the center of arms that clamp onto the rim of the pot. There may be to one to three arms, and the clamp-on mechanism varies by model. Some clamps are better at hanging onto the rim than others due to their design. Models that hook under the lip of the pot tend to work best. In general, clamp-on models are more powerful, though they are also more expensive.

Models with an interior stirring mechanism feature a motor with three arms the extent from the bottom. These models stir and move throughout the pot, which is why they don't clamp onto the rim. Some of these models also vibrate to help move the pot’s contents.

Stirring speeds
You can expect one to three stirring speeds but the more speeds the better. Models with only one speed are limited in their use as you can't turn up the speed for thick foods or those that burn easily.

Fit
Getting a good fit on the rim of the pot can make all the difference to the effectiveness of the paddles. Some models do a better job than others. Clamps that fit around the bottom of the rim usually stay in place better. Models with two or three clamps also tend to be more stable than those with only one.

Stability
Wide, thick paddles offer the best stability as they can handle thicker liquids. Narrow paddles may miss certain parts of the pan, leaving your food vulnerable to burning or scalding.

Stirring action
Not all automatic pot stirrers use the same stirring action. Some feature a motor placed in the center with paddles that extend to either side. The motor them spins the paddles to stir the liquid. Others feature a single, centered paddle that looks and moves like a spoon. These models come with different sized paddles and the "spoon" handle can be lengthened or shortened according to the depth of the pot. The last type is the interior automatic stirrers. They have a paddle on one leg that stirs and helps move the stirrer through the pot. Some also have a vibration to keep the contents moving.

The stirring action of clamp-on models tends to work better than the paddle and vibration method of interior automatic pot stirrers.

Paddle sizes
You definitely want an automatic pot stirrer that comes with several paddles sizes. That gives you some flexibility of use based on pot size and the thickness of the food you want to be stirred

Some manufacturers throw in a cookbook as a bonus. Of course, you may have your family favorites, but who doesn't want to expand their palette every now and then.

Interior automatic pot stirrers that do not clamp on to the pot's rim start at less than $20. These models are often advertised for stirring sauces and soups, but that's about it. They may include a vibration action. There's a big jump in price to the clamp-on models that start around $50 and go up to around $80. These models may have a paddle or center spoon stir design. They typically include more than one paddle size, though some may only have one stirring speed. They may also have one to three adjustable clamp-on arms.

If you're looking for other automatic stirring products, there are crockpots that automatically stir their contents. In our book, any device that takes manual labor out of cooking is worth considering.

Automatic pot stirrers are a specialty kitchen item. We're selective in this kind of category to make sure that we find the best of the best. However, there were a couple of models that didn't make our list that still might work for your specific needs. The Uutensil Stirr is a self-rotating interior model. Three speeds and long legs make it a decent option if you mainly want to stir soups and sauces. We love that the legs are dishwasher safe. The Ardente Gourmet Stirrer fits pots that hold 9 to 16 quarts. The blades self-adjust and self-center to reach the optimal amount of space with every turn. We also love that it comes with continuous and intermittent speed settings for greater versatility. 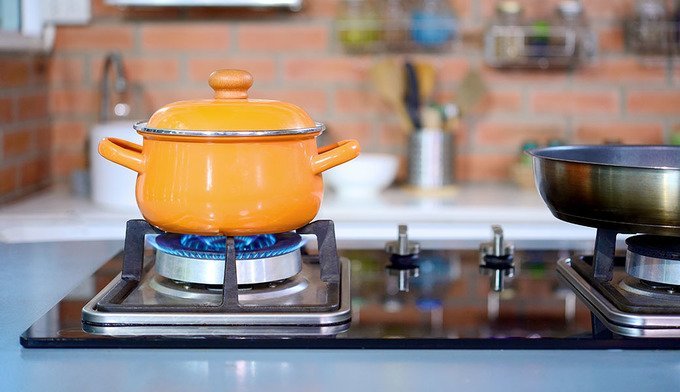 If you're really serious about your cooking and you frequently make vats of food, you may want to consider an industrial automatic stirrer. These models are electric and have a base for added stability. They start around $300 with some models at well above $500.

Q: How well do automatic stirrers fit on the pot?
A: Fit greatly depends on the clamp-on method. Models with a single clamp may not be as stable when stirring during thick liquids. Clamps that fit below the rim of the pot tend to be more stable, and, usually, the more clamps the better.

Q: Are automatic pot stirrers BPA free?
A: Some pot stirrers are BPA-free, but you’ll need to check the description to be sure. Considering that these stirrers are used in hot liquids, it’s important to make sure they’re made of the highest quality and safest materials. 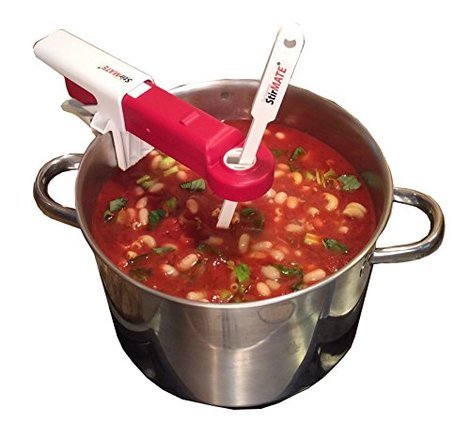 A cleverly-designed, well-constructed, and powerful automatic pot stirrer that will save you time and energy in the kitchen. 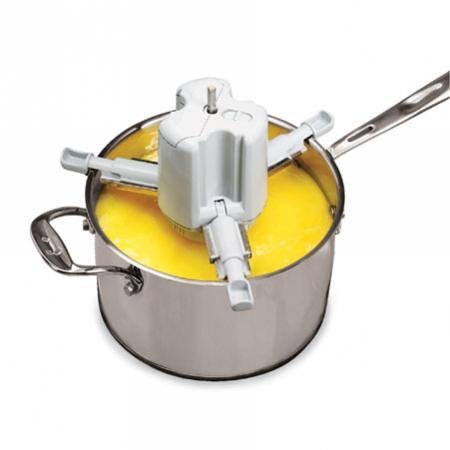 A battery-powered, hands-free pot stirrer with enough power to stir most sauces while you attend to other things. 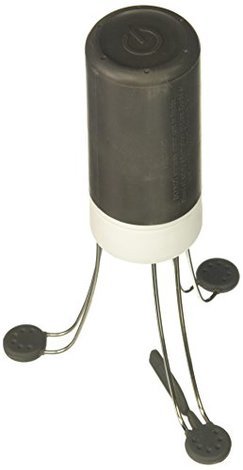 A battery-powered stirrer with 3 speed settings that moves the device's silicone feet around the pot, preventing burning and scorching. 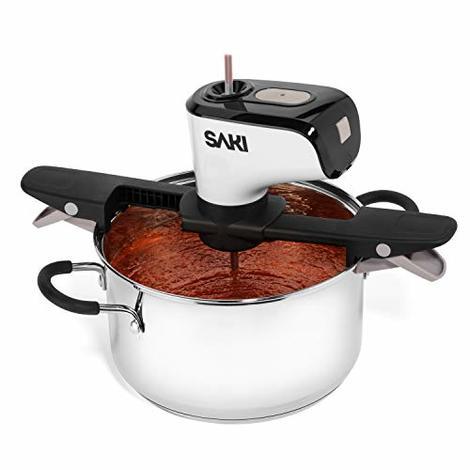 Rechargeable and highly adjustable, this auto-stirrer can handle everything from thin sauces to chunky chili.