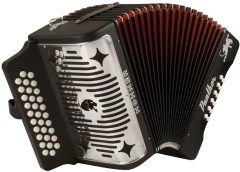 This popular model is a great choice for players of all experience levels. 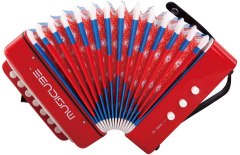 This kid-friendly accordion is compact and creates a rich sound.

Some noted product is smaller than desired. 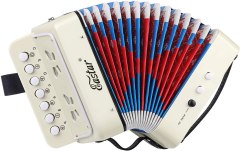 This model is designed to enhance your child's creativity, hand-eye coordination, and love for music.

Has 10 keys including bass key, chord key, and air valve. Made with non-toxic materials. Environmentally-friendly. Easy to use and easy to carry. Comes with a learning guide.

Securing straps may be hard to clip in. 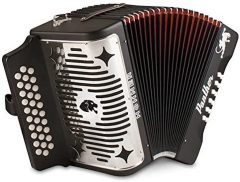 This product is easy to use and produces a great sound.

Has 31 treble keys, 12 bass/chord keys, and 2 sets of treble reeds. Compact and lightweight. Comes with a hard case and Austin Bazaar polishing cloth.

The product is more pricey than others. 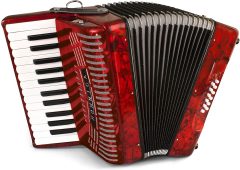 This accordion is ideal for beginners and students to learn.

May not be ideal for experienced players. 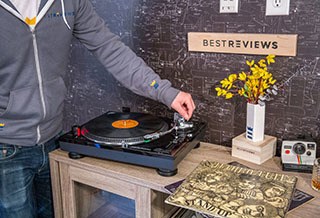 Accordions are versatile instruments that have a place in a range of musical genres, from folk to jazz to rock. They might be fairly uncommon instruments to learn, but they're interesting and fulfilling to play, especially if you're a fan of bands that tend to feature accordions.

If you're a first-time accordion buyer, you might be wondering what you’ve gotten yourself into. As with any musical instrument, you'll come across a range of terminology that's likely to leave you baffled. 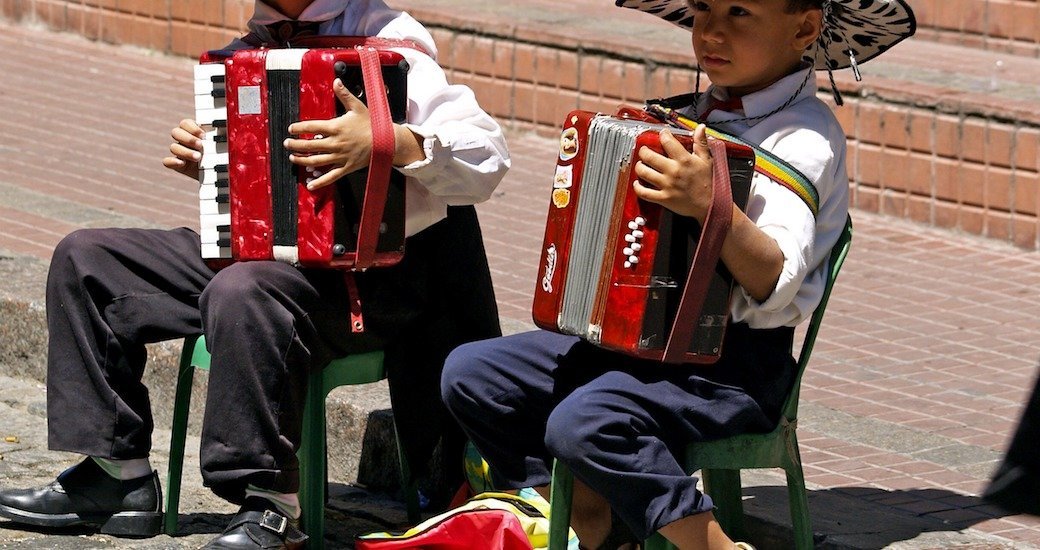 Children's accordions are inexpensive, compact, and lightweight, but they have significantly fewer keys compared to adult models, so you're limited as to what you can play.

Piano accordions are a newer invention than button accordions but have overtaken the traditional kind in popularity. Instead of having buttons, they're played using piano-style keyboards.

Did you know?
Due to the way the notes are arranged, you generally need to make larger leaps and stretches between far apart notes on a piano accordion than you would between the same notes on a button accordion.
STAFF
BestReviews

Diatonic accordions are a variety of button accordion which use a diatonic scale. Each button produces a different pitch, depending on whether the bellows are being pushed in or pulled out.

Chromatic accordions are button accordions, like diatonic models, but they use a chromatic scale. All the keys are a semitone apart, so all notes are covered, including flats and sharps.

Did you know?
Chromatic accordions are unisonic, meaning they play the same note whether you're pushing the bellows in or pulling them out.
STAFF
BestReviews

Considerations for selecting an accordion

Typically, the left hand of an accordion plays bass notes and the right hand plays treble. On the bass side, many accordions use the stradella system, which allows you to play full chords by pressing a single button.

Free bass accordions, however, have single bass notes, so you can create chords yourself by pressing a number of notes at the same time. The benefit of the free bass system is that you can play any inversion of any chord, rather than just standard chords. The downside is that it's harder to play.

The more keys or buttons you have on an accordion, the wider amount of notes you can play, and the more versatile your accordion is.

An accordion can have anywhere between 22 and 45 treble keys, and 8 and 185 bass keys. The most common amount of keys for a "full" accordion is 41 treble keys and 120 bass keys, but most players will do just fine with fewer than that.

Some accordions are fairly ornate, whereas others have a more plain design. Everyone has different things that they're looking for in an accordion, so the design might be quite important to some buyers and not much of a concern to others.

Basic accordions usually aren't heavily adorned, but they may have some metal detailing or a design on the bellows, plus you can find them in a range of colors.

High-end accordions are often handcrafted and have intricate inlays and metalwork.

A tone chamber is built-in to some accordions to mellow the sound of the reeds, giving a smoother, richer tone.

Accordions that feature tone chambers tend to cost more than those without, so most first-time buyers would go for a standard, non-chambered accordion. 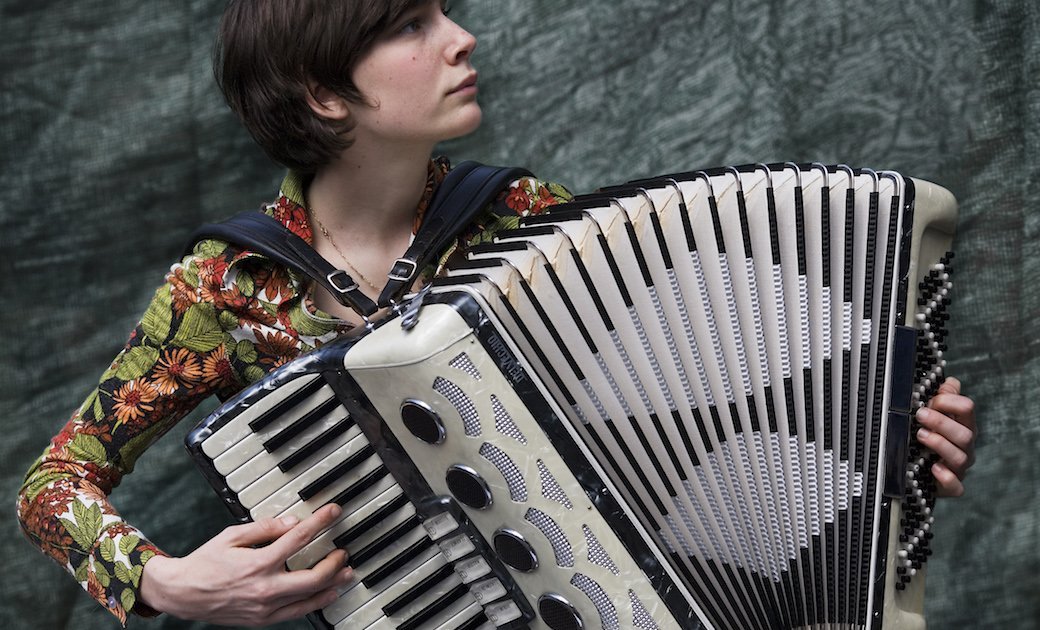 Q. What's the difference between wet and dry tuning on an accordion?

A. Most children won't have the strength or reach to play a full-size accordion. But the good news is, you can find a wide range of smaller accordions designed with younger players in mind. If you're on a budget, you might even consider a kid’s model for an adult player, just to get a taste for the instrument before saving for a better one.

Q. How should I store my accordion when not in use?

A. An accordion is a fairly costly item, especially if you opt for a high-end model, so you should learn how to properly store yours to avoid damage. Store your accordion upright on the bass side to avoid warping of the reeds. Always keep it in a dry place and at a medium temperature — too warm (for instance next to a radiator or in direct sunlight) and it could warp or the wax on the reeds could melt, too cold and it could crack. 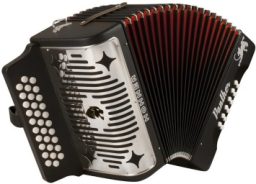 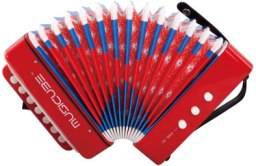 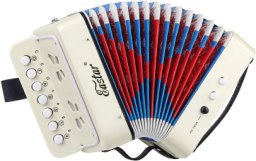 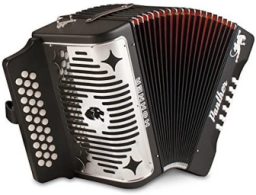 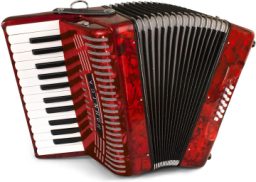 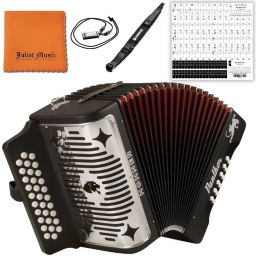 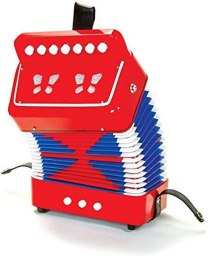 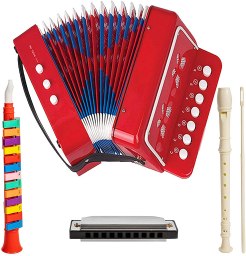