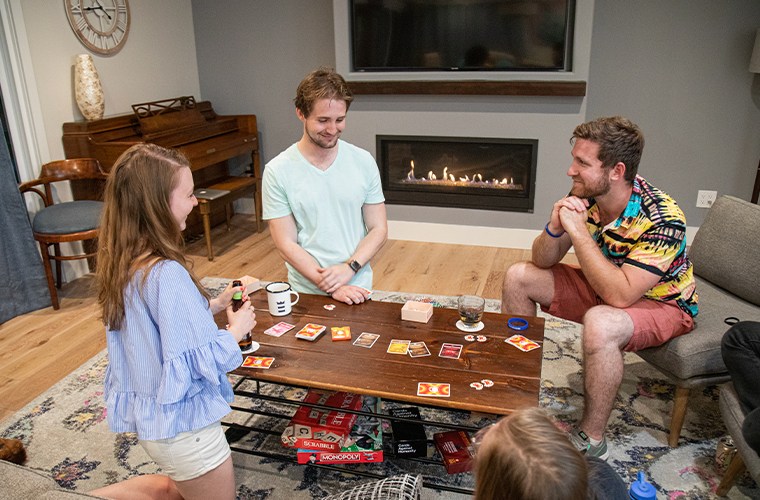 Christmas is traditionally a time to spend with family and friends around a log fire. But between all the gifts, eating and being jolly, it's also an excellent time for playing family-friendly games.

There are plenty of variations on popular games, but there are also new titles that will keep things fresh. As fun as the old games might be, there is nothing better than cracking the plastic wrapping on a brand-new game that everybody can enjoy.

How to have a successful family game night

Some people have a competitive streak, but that doesn't need to be the case with family games. Sure, there are games where scorekeeping is important, but the real prize is spending time with loved ones and not seeing who is the fastest or the best.

Ideal games for family nights are the ones where you play in teams instead of individual members. This ensures that everybody gets a chance to compete with others, which in turn increases the excitement.

Another trick to having a successful Christmas game night is to avoid titles that cause frustration or diminish enjoyment. For example, Monopoly and Uno are two games that are notorious for causing arguments or creating situations where players get picked on. It's best to leave those games for other times or play them with adult friends instead.

Remember, the key is to spend quality time with the family and celebrate the magic of Christmas. It's not thrilling for anybody if you're going to boast about your winning streak or how much better you are than everybody else.

This scavenger hunt game will surely get everybody in the festive spirit. It includes two decks for hunting outdoors or indoors and can be played in teams or alone. Each team or person draws 10 cards from the deck and must find the everyday items as quickly as possible. It includes 220 cards and a set of easy-to-understand instructions, and it is suitable for people ages 6 and older.

With this holiday-themed version of the hugely popular real estate trading game, players can move around the board with a candy cane, train, teddy bear or reindeer game piece. It works in much the same way as the original game, but it has unique Christmas properties, currency and two playing methods.

This board game is the perfect way to teach children about Christmas and the joy of giving gifts through songs, presents and silly challenges. Players get to be Santa, and after choosing a sleigh, they move around the board by spreading Christmas cheer. Along the way, several challenges will make for fun winter nights.

Using only one deck of cards, you can play three Christmas-themed games, such as Go Fish and Slap Jack. The set contains 45 festive cards and useful instructions for how to play the family-fun titles. The cards are large enough for kids to hold them in one hand easily, and the games are suitable for two to six players.

This easy-to-learn game takes inspiration from the hilarious "National Lampoon" franchise and tasks Clark Griswold with setting up 25,000 twinkle lights. But things don't go according to plan, as tangled wires and a pesky squirrel are out to spoil the holidays. This card-based game is suitable for two to four players, and each game takes about 20 minutes.

Played in teams or with individual competitors, this trivia game questions whether the festive facts are true or false. After the fact is read out, players use a paddle to submit their answers. It's great fun for three or more players and suitable for anybody older than 8 years old.

This is the classic Operation game with a Christmas twist. Featuring Bumble the Abominable Snow Monster as the patient, players must use custom tweezers for the various (and hilarious) procedures. However, the game doesn't have traditional body parts to remove. Instead, you can expect to find the Jingle Tingle, Mistletoe, Sweet Tooth and the Belly Full of Jelly.

This Christmas-themed truth-telling trivia game is about telling hilarious stories about friends and family. The roast master draws a card and reads it out loud. Everybody else must then write down the funniest answer, and after reading them out, the roast master picks the favorite. It is suitable for three to 20 players ages 12 years and older.

Nobody should be bored when this games box is opened. It contains 12 easy-to-learn games, including Reindeer Antler Ring Toss, Panto or Picture and Clutch the Kazoos. All the games have been carefully designed to appeal to players of all ages and to ensure maximum laughs. It is a mixture of solo and team-based titles spanning card games, brain games and board games.

Featuring illustrations from Dr. Seuss' beloved Christmas classic, this game sees players using cards and special moves to grow the titular character's heart and get into the spirit of Christmas. Each player assumes the role of the Grinch to increase his score while competing against the Whos for gifts.