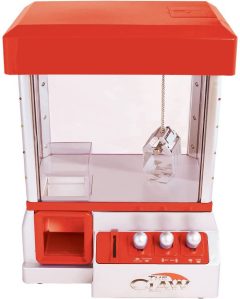 This game is designed to create a carnival-like experience from your own home.

No volume control for music. 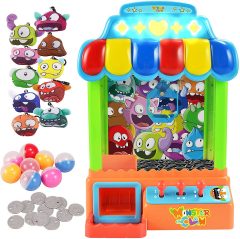 This affordable toy is designed to build your children’s fine motor skills while boosting their creativity and promoting a sense of accomplishment.

May need to be kept plugged into power source to maintain charge. 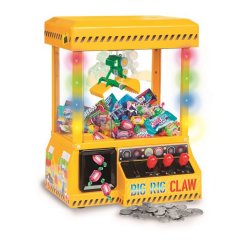 This product makes a great gift for any occasion and fosters your children’s eye-hand coordination and calculation skills.

Requires three D batteries that are not included. 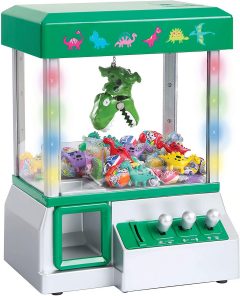 This adorable game makes a great gift for children of all ages and creates a realistic carnival experience in your own home.

Made with dinosaur grabber and 3 joystick controls. Includes flashing lights and carnival music. Easy to use. Comes with 30 tokens, 4 plush animals, and 8 small dinosaurs.

A little on the loud side. 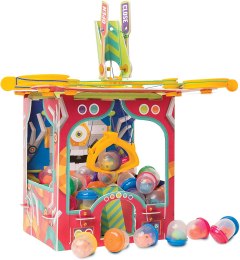 Creative and engineering-minded kids will enjoy the time it takes to construct their own fully-functional claw machine.

Best for ages 8 and older.

With a mini claw machine, you can bring the excitement of the arcade into your own home and allow your children to not only develop better hand-eye coordination but be rewarded for it.

The best mini claw machines are durable and accommodate a variety of prizes from toys to candy. You may also want a fun design with flashing lights and sound for a stimulating and immersive experience. Additionally, a mini claw machine that accepts tokens or real coins is often the most fun for kids because it most closely mimics an arcade claw machine.

For all you need to know before you purchase a mini claw machine, our guide has you covered – including tips on how to actually win that prize you have your eye on. 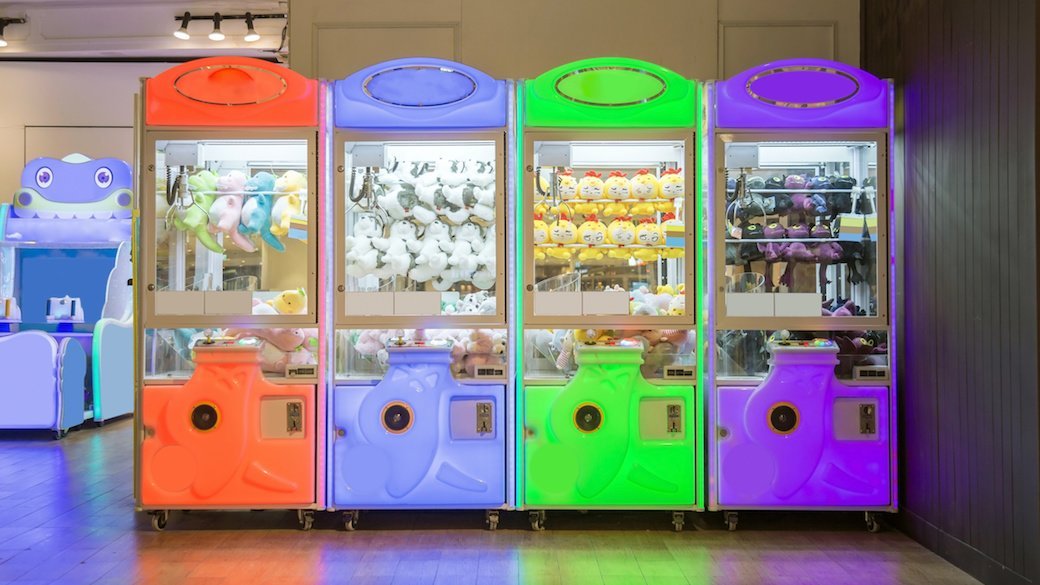 Claw machines can be traced back to the 1890s when consumers paid a penny to operate a hand-cranked machine to get candy.

Mini claw machines can be a hit with the kids (and the adults), but only if you pay attention to what you are buying and get a model that includes all the features that make this game so much fun.

Mini claw machines are designed for children. However, many come with small parts. Be sure to check the recommended age range before purchasing if you intend to let a young child play with the machine.

The best mini claw machines are about 13 inches tall and have a base that’s roughly eight inches by 10 inches. This is a good sturdy size that doesn’t take up too much room in the toy closet. However, some of the lower-end models might be considerably smaller. Always check the dimensions before purchasing because it can be impossible to judge a mini claw machine’s actual size from a photograph.

Mini claw machines are the most fun to play with when they are battery-powered. Powered models are just like the big claw machines in stores and arcades. That’s not to say children won’t be momentarily amused by a manually powered mini claw machine, but chances are their interest will fade more quickly.

There are two types of controls generally found on battery-powered mini claw machines. The first is a single joystick, which moves the claw to the right, left, front, or back. This type of machine also features a button that drops the claw into the prizes. Other mini claw machines have three joysticks. One joystick moves the claw right or left, a second moves it forward or backward, and the third moves it up or down.

If you want convenience, purchase a mini claw machine that comes with a set of prizes. That said, it’s often wiser to purchase the machine and the prizes separately so the quality of each can be better assured.

Mini claw machines that allow you to deposit tokens or coins add a little more excitement to the gameplay. If the machine takes both, it’s usually best to use real coins because plastic tokens can sometimes get stuck.

To add even more excitement, look for a mini claw machine with flashing lights.

The most engaging mini claw machines feature music that plays during gameplay. The best machines also feature sound effects. If you want a crowd of people to cheer whenever you successfully snatch up a prize, look for a model that can do exactly that.

Did you know?
For a fun spin on the game, instead of prizes you can fill the container of a mini claw machine with fortunes, affirmations, quotes, math problems, word puzzles, or other creative items.
STAFF
BestReviews

Mini claw machines are easily divided into three main price categories. If you want to spend less than $20, you’ll get a plastic mechanical toy that may not be very durable and can only pick up very small or specific items.

In the $25 to $40 range, you will find smaller battery-powered novelty units that might also function as clocks. These mini claw machines might accept plastic tokens or real coins to simulate arcade-style playing.

As you move into the $45 and up range, you’ll find more durable play and more bells and whistles, such as lights and music, and a wider variety of prizes that the claw is capable of picking up.

"Since mini claw machines have a consistent claw strength and do not frequently drop prizes, they are much more fun and rewarding to play than arcade versions of the game."
STAFF
BestReviews

After practicing on your home mini claw, your kids might be ready to take their game to the arcade. Here are some prize-winning tips for arcade play: 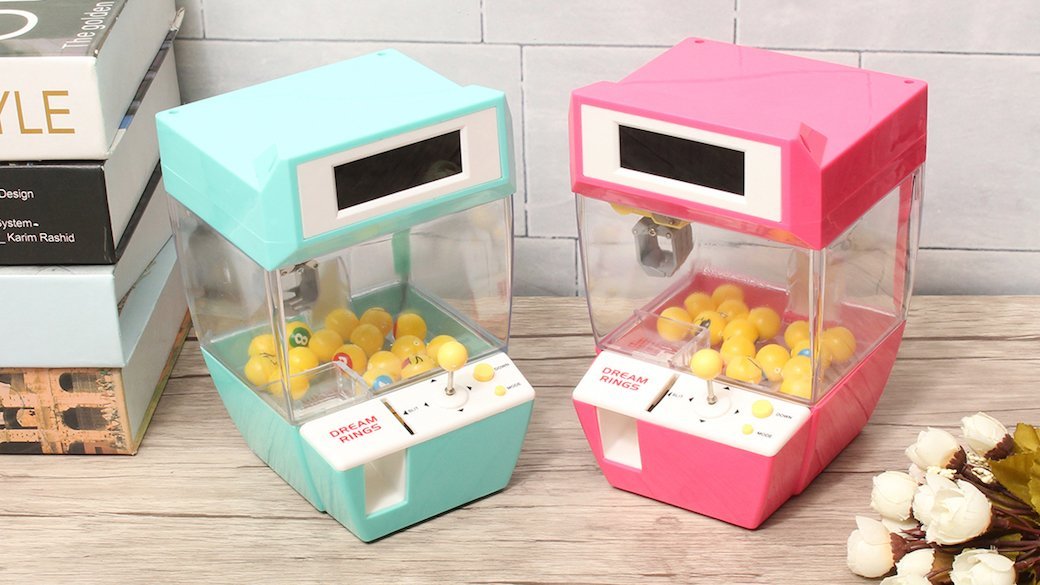 Mini claw machines are often designed for specific prizes. A machine that dispenses candy might not function well with small stuffed toys.

A. The lower-end models are manual machines. Mini claw machines that feature push buttons or joystick operation use batteries. Because of the power needed to operate the claw and lift toys, most often a unit will use three D batteries. Machines that run on AA batteries may not be as enjoyable.

Q. What can I put in my mini claw machine as prizes?

A. Mini claw machines are extremely versatile. They are safe for wrapped candy and small toys. Be careful of using toys that can get caught or tangled with other toys or any of the machinery, however, as this might cause a jam that breaks the machine.

Q. Are there any concerns for younger children using mini claw machines?

A. The primary concern with a mini claw machine is choking. Many of the models only accommodate tiny toys that are one to three inches in size, so care must be taken to only allow children who are above the recommended age to play with the mini claw machine. 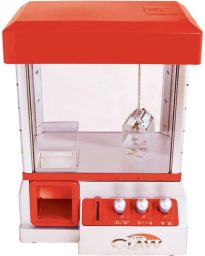 Best of the Best
Constructive Playthings
Carnival Crane Claw Game
Bottom Line
This game is designed to create a carnival-like experience from your own home.
Shop Now 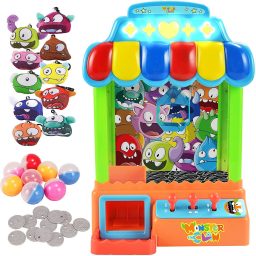 Best Bang for the Buck
JOYIN
Extra-Large Claw Machine
Bottom Line
This affordable toy is designed to build your children’s fine motor skills while boosting their creativity and promoting a sense of accomplishment.
Shop Now 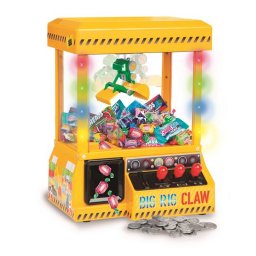 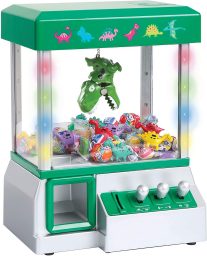 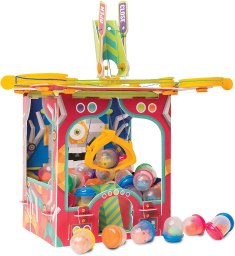