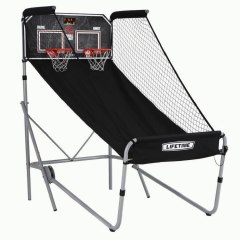 Folds down fully for storage. A little smaller than some other options, making it good for tight spaces. Both front and rear areas can be adjusted to allow children of different heights to play. Dual baskets for competition. Reasonably durable materials.

Pricier than some other options. Scoreboard doesn't count accurately. 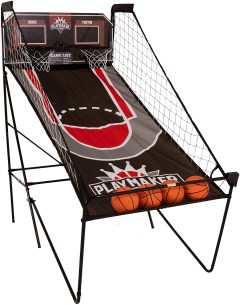 Wonderful arcade game that is packed with everything to set up and start playing.

The material is not as durable as it could be. 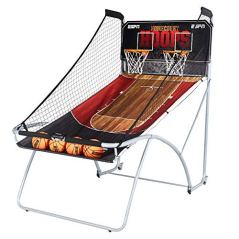 ESPN-branded arcade set helps users feel like they are playing on the worldwide leader. Included audio and sound effects are most akin to standard arcade basketball games. All-metal frame is far sturdier than several other options on the marker. Standard-sized design doesn't skimp on authenticity.

Extremely tough to assemble. Very difficult to fold up for storage. 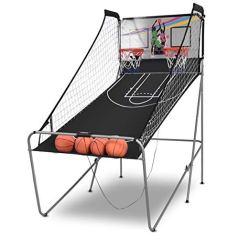 You'll receive better than expected quality with this unit versus others in the price range.

Standard-size arcade game, which isn't always the case in this low price point. Includes 2 baskets. Steel frame. Folds up to save space when not in use. Works better for younger children; older kids may be too rough with it.

Only ships with 4 basketballs. Not quite as durable as some others.

Growing up, going to the arcade wasn’t just a fun way to burn through quarters; it was a bona fide rite of passage. First-person shooters, racing sims, beat ‘em ups, and pinball were great ways to kill time with friends, but the most competitive games were significantly more hands-on, specifically, basketball arcade games.

Though they date back to the 1980s, basketball games remain a staple in arcades to this day. That’s because they rely on coordination, endurance, and mechanical skill more than other games, and there’s no better way to get your blood pumping than with a friend-versus-friend challenge.

Today, basketball arcade games for home use are more available than ever. They’re a great fit for casual gamers, party-throwers, or serious competitors looking to improve their coordination during off days. Which games are the best on the market? Step up to the line and find out. And when you’re ready to buy, check out our top recommended basketball arcade games, too. 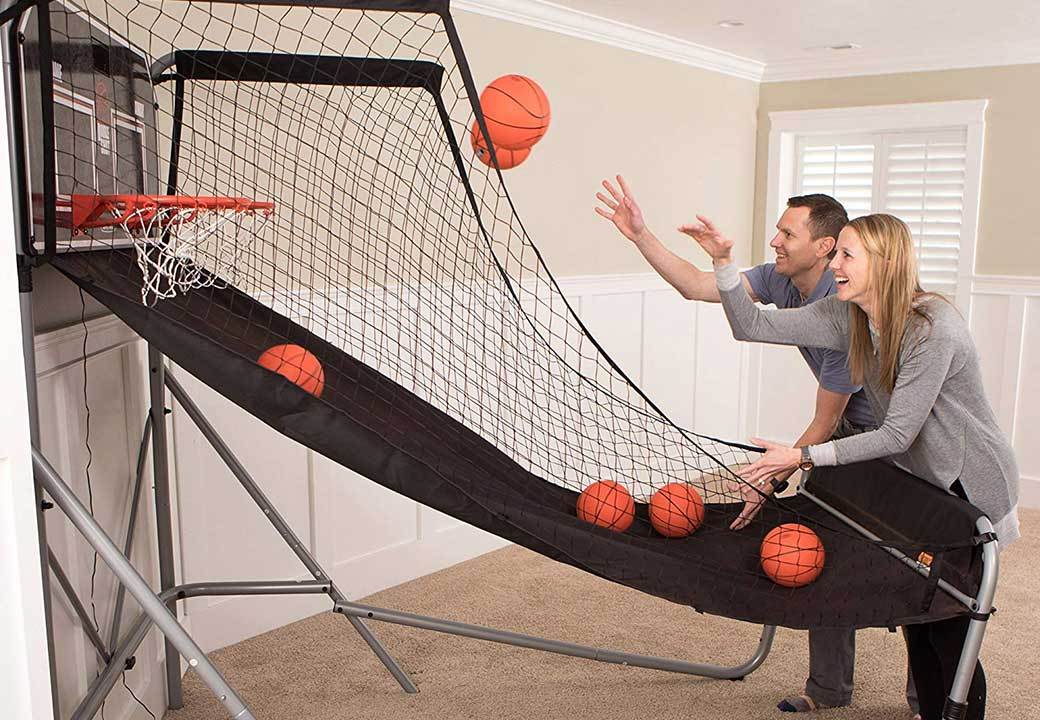 The first basketball arcade game was called the Pop-A-Shot, a nonelectronic, downsized basketball game from the 1980s. A basketball coach invented it while recovering from heart surgery.

Basketball arcade games experience more wear and tear than their gaming siblings, even more than those side-scrolling button-mashers. That means if you want your product to last, spend a bit more up front for high-quality materials like 18-gauge powder-coated steel and a thick backboard. It can be tempting to opt for quick-connect plastic units for the shorter assembly times, but if you plan on putting your game through its paces, splurge for the heavier materials.

Basketball players and gamers come in all shapes and sizes, so adjustability is paramount here. Quality games allow you to adjust the height of both the front shooting area and the backboard; however, some allow you to choose from several preset dimensions. A common size is 81 inches long, 48 inches wide, and 81 inches high.

In addition to the adjustability of the play area, many basketball arcade games also fold down for more efficient storage.

Most basketball arcade games equip two baskets, but some have one, some have three, and some even have four. Single-basket games are nice for practice, but in our opinion, the fun increases exponentially with more baskets. This of course depends on how you’ll use the machine and how many players you expect to use it, but intense competition is part of the enjoyment.

The number of basketballs included with your game greatly affects how much you’ll enjoy it. Having more basketballs facilitates multiplayer games and makes it easier for rapid-fire quick-shooting game modes. That said, some units only include two or four. This can be frustrating if one goes flat, particularly if you don’t have a pump to fix it. Look for games with six included basketballs for greater peace of mind.

There are countless ways to play the game of basketball, and with a modern arcade, switching modes is as simple as hitting a few buttons. Eight game modes is a good benchmark for a basketball arcade game, but the choices will vary by manufacturer. Here are some common modes for solo, cooperative, or competitive play:

Single player: Score as many baskets as you can in a limited time.

Multiplayer: Score more baskets than an opponent playing at the same time.

Sharpshooter: A solo player waits for the announcer to say “left” or “right,” then has three seconds to make a basket in the correct hoop.

Double or nothing: With thirty seconds on the clock, two players shoot. The first basket counts as two points, with each successful shot counting as double. If no shots are made in three seconds, the points reset to two.

Checkpoint: Players attempt to score more points than their opponent in a limited time, while being granted time extensions for passing certain point benchmarks.

Tug of war: Two players start at zero points. If one player scores, they get two points, while the other gets minus two. The game continues until someone reaches ten points.

Real basketball games are loud, raucous, and interactive, which can make solo arcade play tepid by comparison. Modern arcades sprinkle more of that live flavor into the mix with a variety of feedback sounds, including crowd noise, music, announcer chatter, and point notifications. These are generally projected from the LED score display alongside various lights and animations.

When the first basketball arcades started popping up in the 1980s, the idea that you could effectively play with someone across the globe using your phone was unheard of. Companion apps have made that possible, though, connecting player profiles together for lighthearted remote competition. You can either challenge someone who is online at the same time as you or challenge an offline player’s score and wait for their response.

Did you know?
Basketball arcades fluidly combine video gaming and sports, offering a nice halfway point for those interested in both. If you or your children love gaming but aren’t active enough, consider one of these as an alternative.
STAFF
BestReviews

Most basketball arcade games are priced between $100 and $300. While you’ll see enhanced feature sets as the price increases, the main difference between an inexpensive unit and a top-end unit is build quality. Considering the hands-on nature of these machines, durability should be one of your highest priorities.

Mid-range: Moving up to the $200 range, the scoreboards get more intricate, with an increased number of game modes and interaction with players.

●     Warm up before you play. Arcade games aren’t as strenuous as real basketball, but you should still stretch and lightly warm up to prevent injury. Better safe than sorry!

●     Use proper form. To prevent developing bad habits, utilize proper form even when playing arcade basketball. Stand with your feet shoulder width apart, use full arm extension when shooting, and keep your eyes on the hoop.

●     Set a personal score goal every week. This allows you to gradually get more comfortable with the game and improve over time at your own pace. You’ll be an arcade champion before you know it.

Basketball arcade games have been around for nearly 40 years, so the ubiquity of these products should come as no surprise. One that didn’t make our list but we’d like to highlight is the Sportcraft Cyber Basketball Arcade. It boasts a companion app and is even endorsed by Shaquille O’Neal. It comes with four balls and a pump. We were also impressed by the folding Nova Microdermabrasion Indoor Basketball Arcade. It’s made of powder-coated steel that’s easy to set up, and it comes with eight game options and four basketballs. 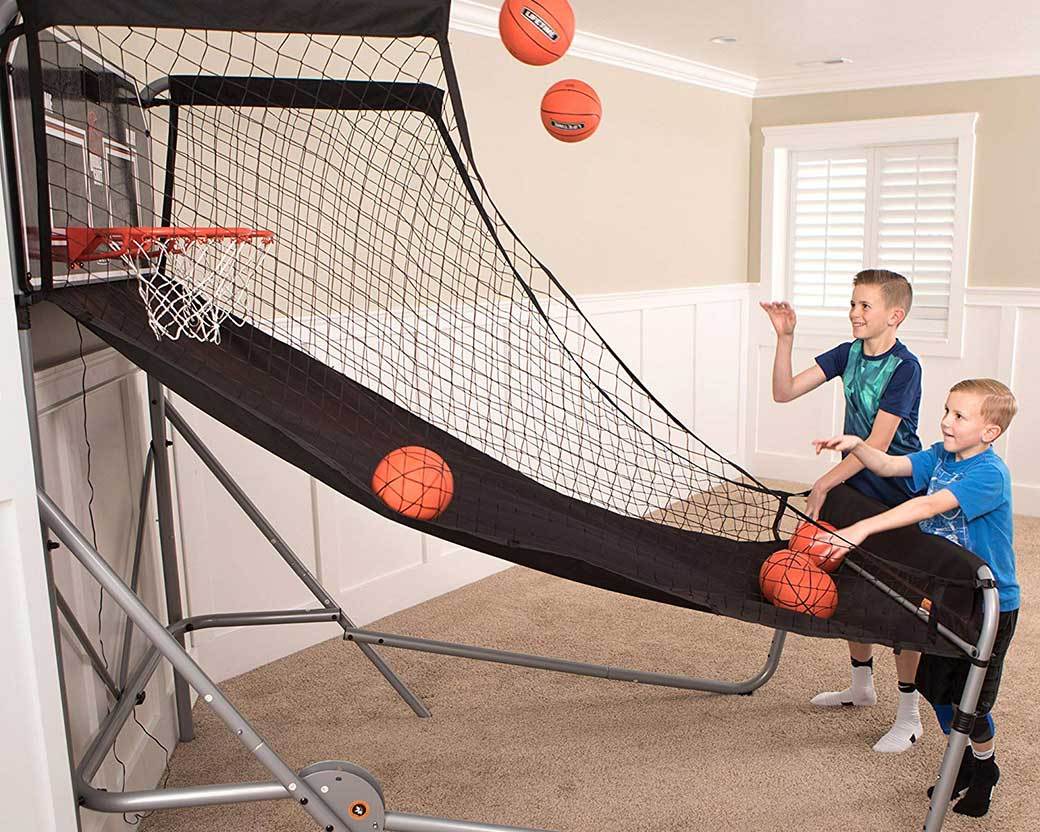 Basketballs lose pressure over time, which is why some games come with an air pump. Not every version does, though. If yours doesn’t, purchase one from a sporting goods store to keep the action going.

Q. Are basketball arcade games hard to assemble?
A. Assembly differs from product to product, but generally speaking, the task is quite involved. They typically ship in one or two long boxes weighing between 50 and 80 pounds and include tools. The process is significantly easier with two people because one can hold larger pieces in place while the other connects them. You can expect to spend an hour or more assembling your game, although some foldable options can be set up in minutes.

Q. Do I need an outlet to play a basketball arcade game?
A. While most arcade games plug into a household outlet, certain models can run off battery power, usually four AA batteries. This allows you to move the game to different parts of your home or even outside for events or parties. Keep in mind that you can still shoot hoops without power – you’ll just have to keep score yourself. 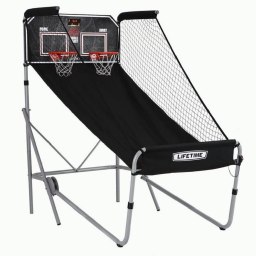 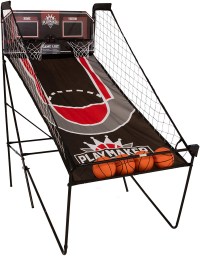 Best Bang for the Buck
Triumph
PlayMaker Double Shootout
Bottom Line
Wonderful arcade game that is packed with everything to set up and start playing.
Shop Now 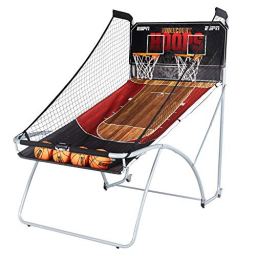 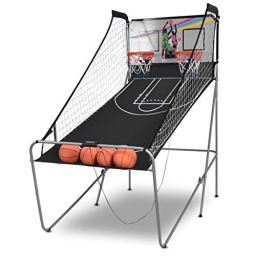 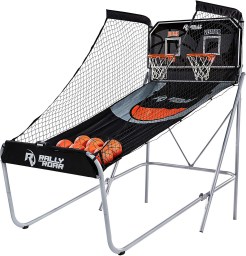 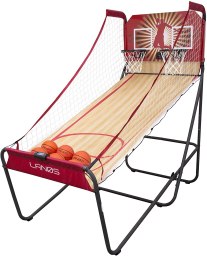 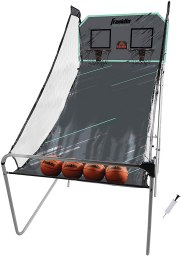