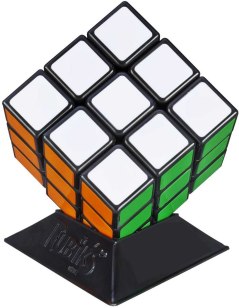 Suitable for everyone from novices to masters, this Rubik's Cube is affordable and fun.

The classic version of the iconic Rubik's Cube at an affordable price. Has brightly colored squares. Includes a display stand for storage or decoration. A puzzle solution guide breaks down how to solve the cube step-by-step.

Some consumers claim to have received cubes with stickers instead of tiles. 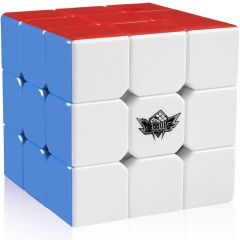 This stickerless speed cube design is great for anyone who enjoys puzzles.

A 3x3 cube that is smooth even when using lightning speed. Eco-friendly and non-toxic. It is tension-adjustable and competition-ready. Design is light, too. Extremely affordable and good quality, especially for competition use.

Some quality concerns. It can be a bit noisy. 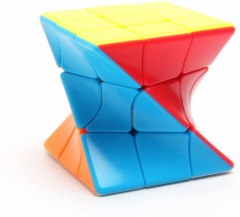 A fun novelty item that's a good addition to a Rubik's Cube collection.

This Rubik's cube has a unique, twisted shape that makes it a harder challenge to solve. The cubes are completely colored; there are no stickers. Pieces move easily and quickly.

The plates in the cube may pop out easily, so handle with care. 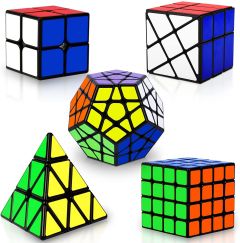 Set features 5 Rubik's cubes with shapes like triangle, square, and more. It ranges from beginner level to more advanced. Eco-friendly material. Great to give as a present. Brightly colored. Affordable price for the value.

Product might break easily. Stickers may peel off easily. 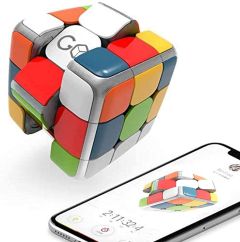 The innovative Rubik's cube that is electronic and has its own app.

This educational STEM puzzle features an interactive system that allows you to compete with others online. The app helps you see your progress. Magnetic. Glows in the dark. Cool and colorful design. Award-winning product.

This product is quite expensive. Some bugs and problems with the app.

Since its debut in 1980, the Rubik’s Cube has been a popular puzzle toy that has perplexed and fascinated people from around the world. Rubik’s Cubes come in a variety of sizes, colors, and shapes.

If you’re just starting out, a smaller puzzle like the 2x2 poses a less intimidating challenge. Those who want the classic puzzle should consider a 3x3 cube. If you’re a “speedcuber” and plan to test your cube-solving abilities, you should look for a cube designed to twist easily. For a bigger puzzle that takes a bit more skill to master, the 4x4 or 5x5 cube may meet your needs. There are also a variety of Rubik’s Cubes in unconventional shapes and colors. Whether you’re aiming for a new speed record or just want to solve the classic puzzle for the first time, there are many puzzles to choose from.

Rubik’s Cubes range from small to large, easy to difficult. 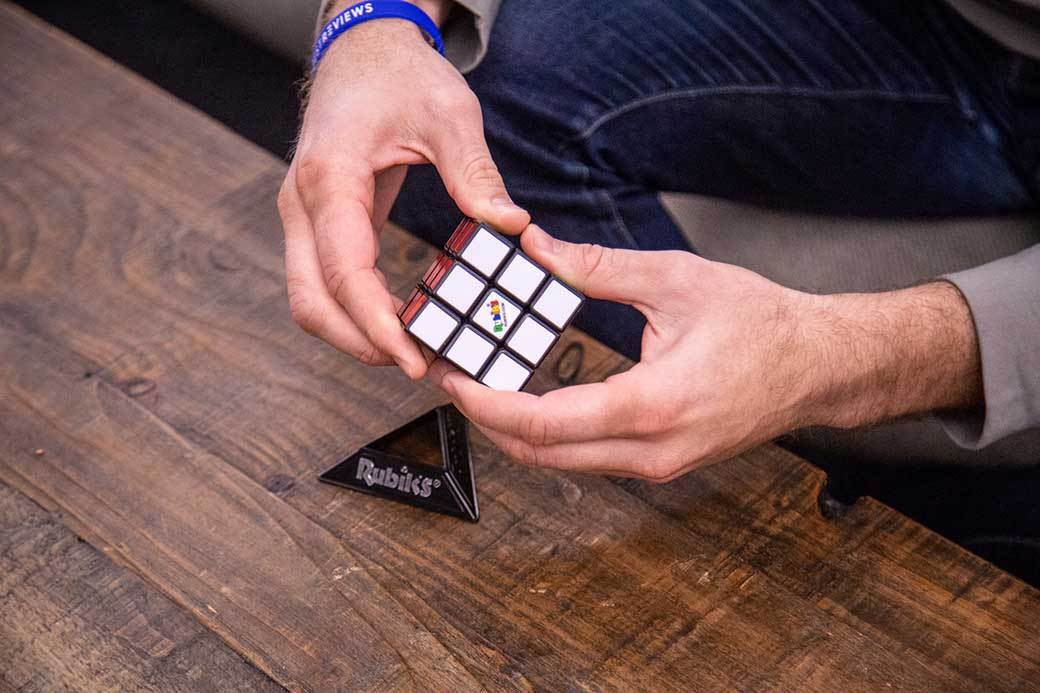 No matter how much you scramble it, a Rubik’s Cube is always solvable.

History of the Rubik’s Cube

In 1977, Hungarian professor Ernő Rubik released his “Magic Cube” toy, but it wasn’t until 1980 that the toy received a worldwide release, this time under the name “Rubik’s Cube.”

The toy took off quickly, and to this day it remains one of the best-selling puzzles. The classic 3x3 Rubik’s Cube features six colors and can be twisted in any direction to solve (or scramble) the puzzle. The six center cubes always stay in the same place, while the edges and corners can be shifted around the cube.

While solving a Rubik’s Cube is difficult, there are several step-by-step methods to do it. Many Rubik’s Cubes include a solving guide, and there are lots of online tutorials available.

Did you know?
Solving a Rubik’s Cube isn’t the only thing you can do with it. You can also learn different patterns, which can be created by starting from a solved state.
STAFF
BestReviews

Do you want to solve the iconic puzzle for the first time, or do you plan on competing and using advanced tricks to solve it with lightning speed? How big of a puzzle do you want? There are several different Rubik’s cubes to choose from, designed for puzzlers of all ages and skill levels.

2x2: This puzzle has 8 cubes and 24 panels in the classic six colors. While some people argue that the 2x2 is harder than the 3x3 since it’s easier to undo your work, it actually requires fewer steps and much less time to solve. If you’re set on learning the puzzle, or if you’re buying a cube for a younger puzzle-solver, this is a great starting point. More experienced cubers may enjoy this little puzzle as well.

3x3: This is the classic cube. It has 27 cubes with 54 panels and takes most speedcubers a minute or less to solve.

4x4: This cube is similar to the 2x2 in that it lacks central pieces. With 64 cubes and 96 panels, there’s almost twice as much to solve as the 3x3 cube. You can use a 4x4 cube like a 2x2 by not twisting the outermost layers.

5x5: This is the biggest challenge of them all, boasting 125 cubes and 150 panels. This puzzle takes significantly longer to solve than smaller cubes, but solving it is also that much more rewarding.

The classic Rubik’s Cube colors are white, blue, green, yellow, red, and orange. White is opposite yellow, green is opposite blue, and red is opposite orange.

Some Rubik’s Cubes have unusual colors like silver or gray. Some cubes even have textured tiles. These alternate cubes can make for a fun challenge for experienced cubers. 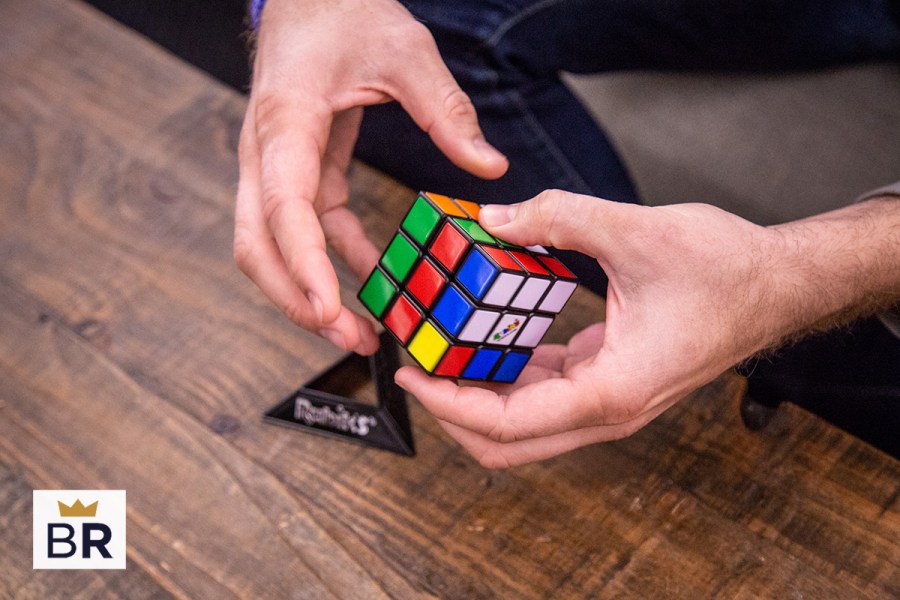 Rubik’s cubes can come in various sizes ranging from 2”x2” to 4”x4”. The traditional size is 3”x3” but we are always on the lookout for easier or harder cubes for beginners and experts alike. 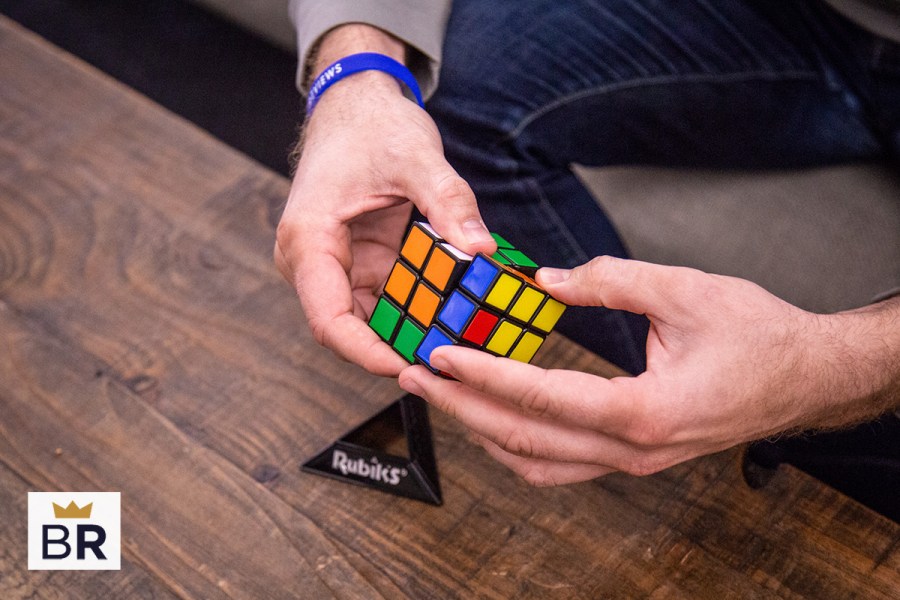 Most standard Rubik’s cubes come with stickers to represent each color. We assess how well these stickers hold to the cube itself. 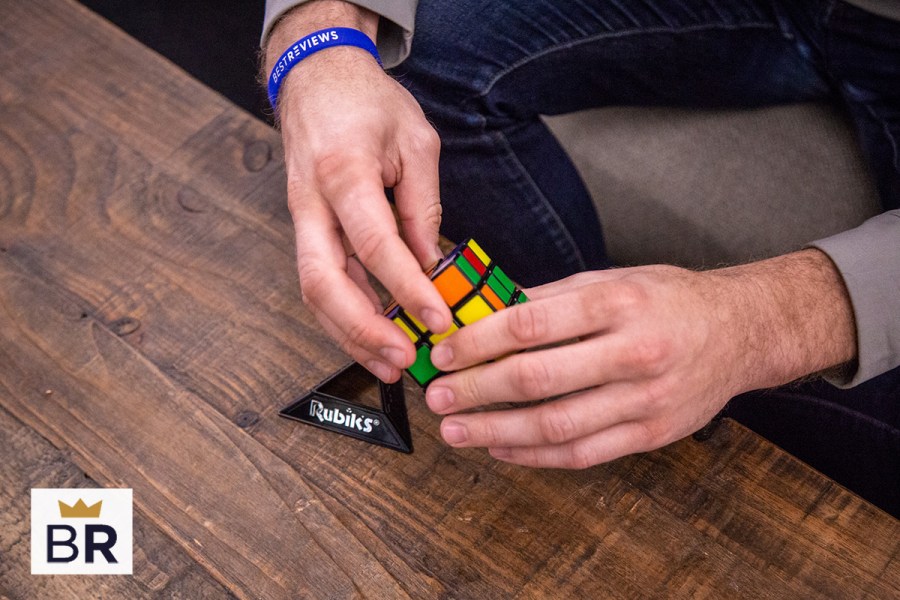 Each Rubik’s cube has a certain algorithm for solving it. We do a deep dive to see how easy or hard each algorithm is to learn for the size of the cube. 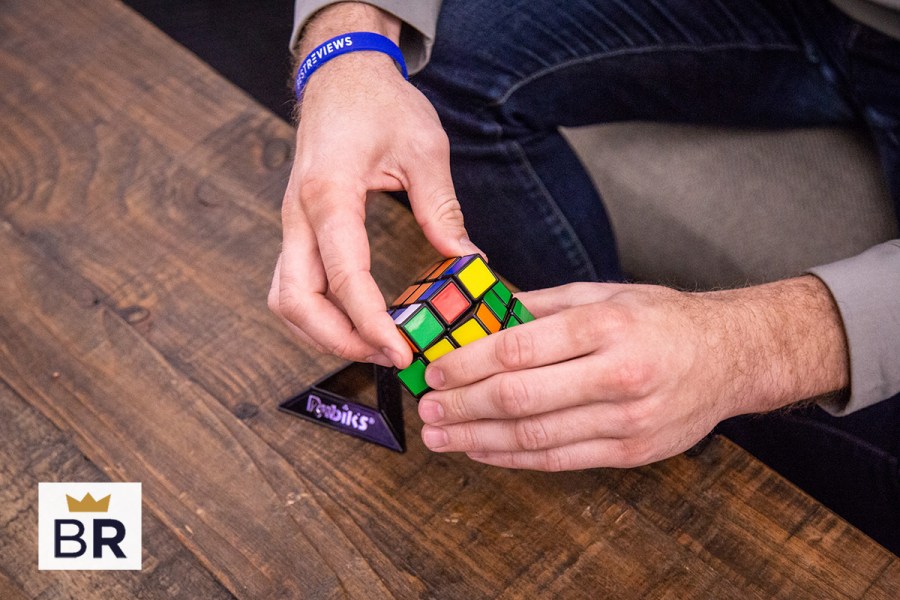 While most Rubik’s cubes come with the traditional colors of white, blue, red, green, orange, and yellow, there are some options that provide unique coloration, which we consider. 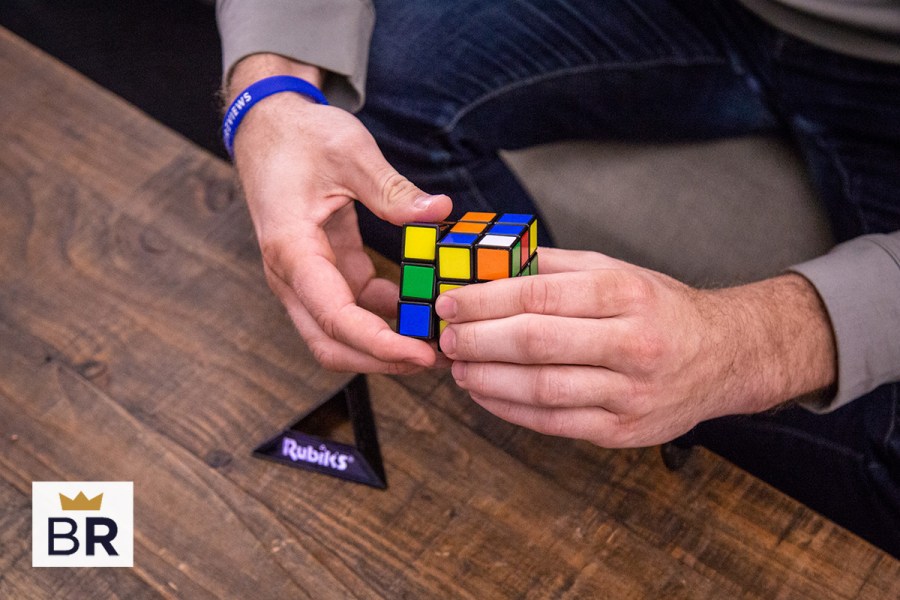 Certain Rubik’s cubes are designed with the colors painted or printed on. We research how long the paint is supposed to last under normal wear and tear. 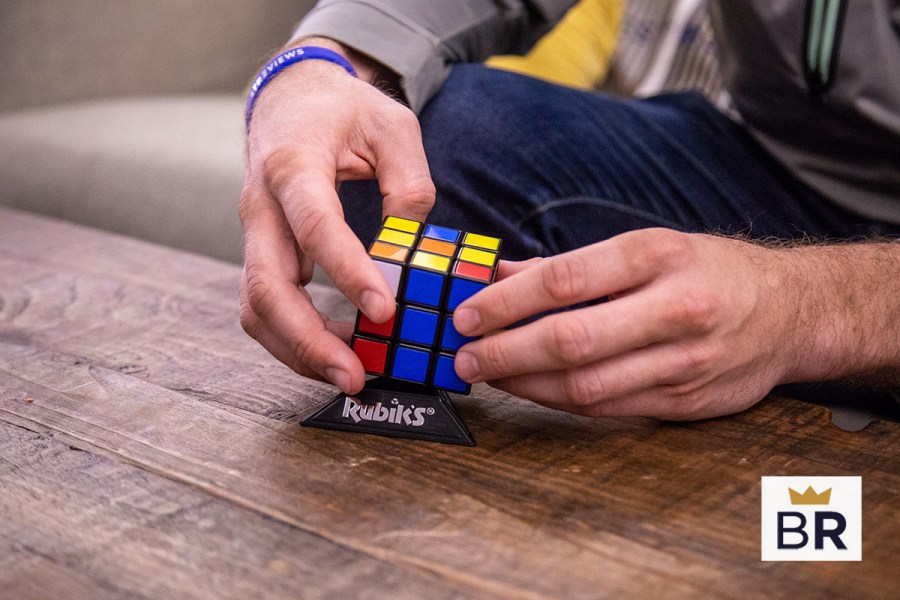 A standard Rubik’s cube is made from heavy-duty plastic, but some are made from metal or wood as well. We weigh the pros and cons of each material and how it feels in your hand. 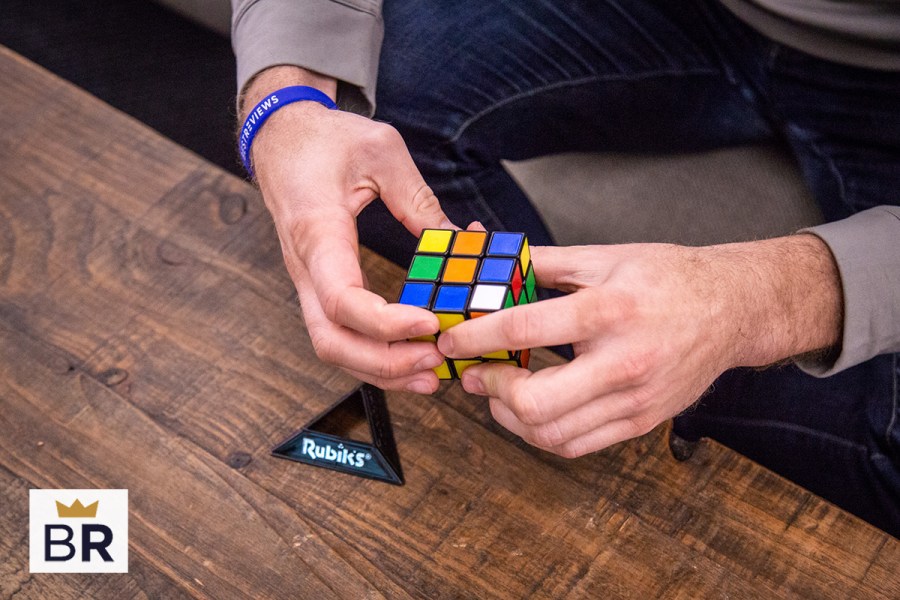 Rubik’s cube experts often get so good that they try to see how fast they can solve each puzzle. We research if these speed cubes slide quickly and smoothly. 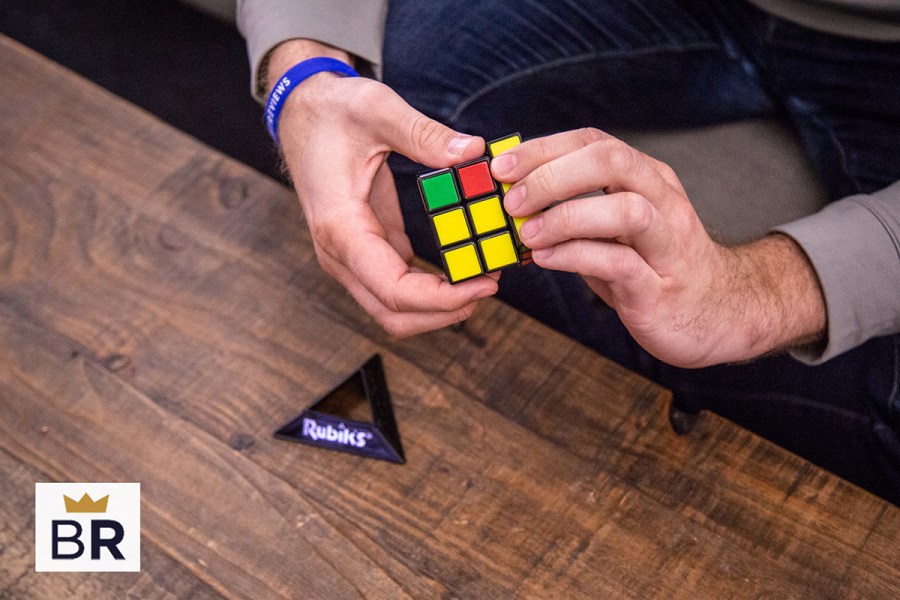 Some Rubik’s cubes will come in a package with a stand or maintenance tools. We investigate these extras and if they add to the value of the product itself. 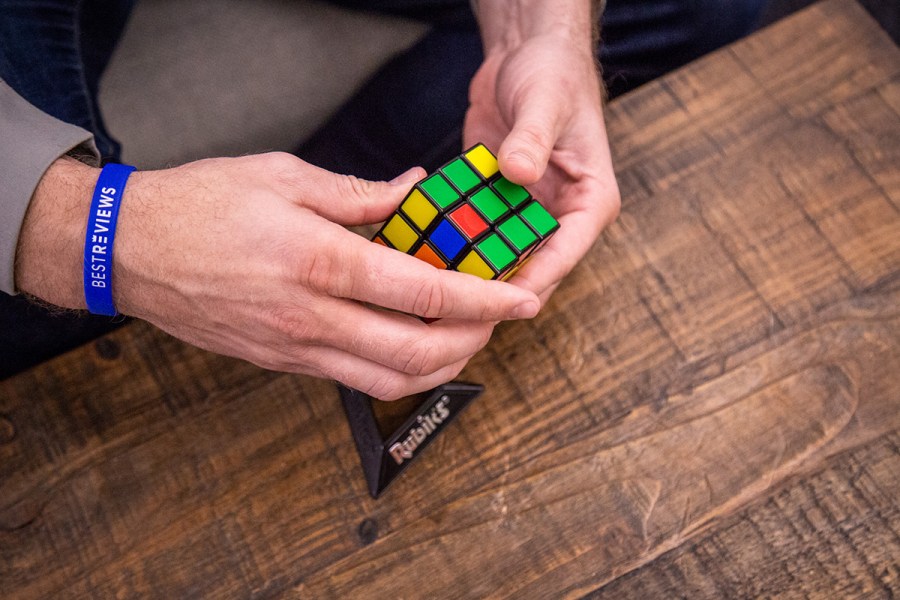 While the standard Rubik’s cube is a 3”x3” grid with color blocking, there are also unique shapes that may prove to be a harder challenge. We assess if these designs are worth paying for. 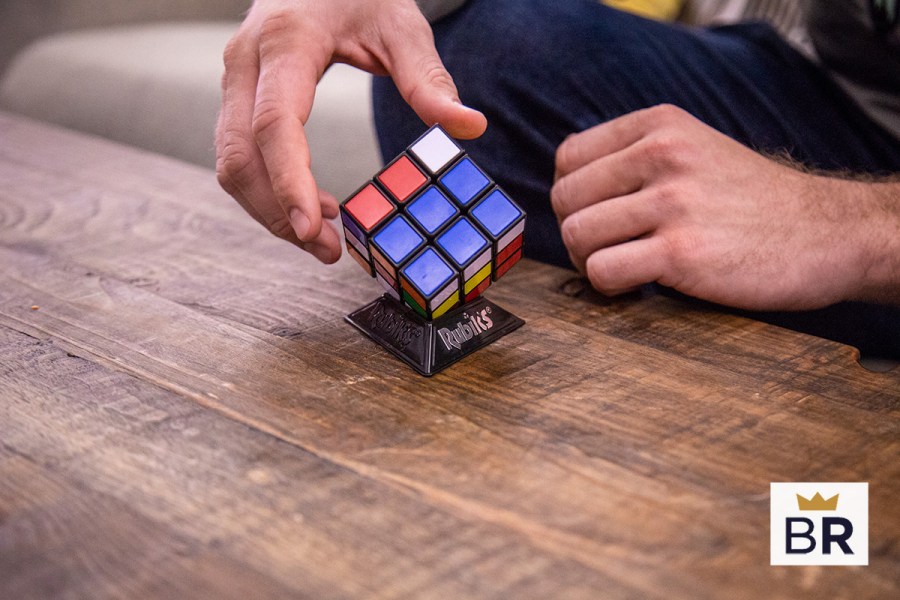 Certain Rubik’s cubes are designed to be taken apart if cleaning is needed. We research how easy these options are to take apart, clean, and put back together.

Once you know what size cube you want, consider additional factors like whether a speed cube is right for you or if you prefer stickers to tiles. Some Rubik’s Cubes also include accessories.

Stickers: This is the classic choice and standard on most Rubik’s Cubes. However, the stickers can lose color over time and may wear off, especially if you’re a speedcuber. If you opt for a cube with stickers, you might also want a protective bag or case to protect your cube and the stickers.

Tiles: These cubes are far more robust and won’t lose color over time. This is the popular choice among speedcubers, but beginners may enjoy the look and feel of the tiles as well.

The idea of speedcubing may seem unfathomable to newcomers, but just a few months of practice could have you racing to beat your record time.

Speed cubes are designed for extremely fast turns. The edges are slightly more rounded than those on a regular cube, which helps to prevent the cube from locking up. The springs in the turning mechanism are looser, allowing for quick, precise turns.

Many speed cubes include a tuning tool so you can adjust the springs to your desired tightness. Tuning your cube can also help you make sure that the tightness on all the sides is equal.

Some Rubik’s Cubes can twist into bizarre shapes, and some of them aren’t cubes at all.

Some Rubik’s Cubes come with extra accessories like a display stand, protective bag, or tuning tool. If you plan to make cubing a hobby, consider a cube that comes with a few extras.

Did you know?
Even after you’ve mastered the Rubik’s Cube, it will still feel like a different puzzle every time because each scramble is different.
STAFF
BestReviews

Inexpensive: Rubik’s Cubes that cost $5 to $10 include basic 3x3 and 2x2 cubes and Rubik’s Junior Cubes. These products are a great starting point for anyone looking to get into cubing. However, they’re limited when it comes to speedcubing.

Mid-range: For $10 to $20 are speed cubes and unconventional shapes and colors. Larger cubes like the 4x4 may fall into this range.

Expensive: Rubik’s cubes in the $20 to $30 range are usually 5x5 cubes or cubes with unconventional shapes. You should only look in this range if you’re hoping for a more challenging puzzle.

"The specific moves that help you correctly orient and swap pieces are called algorithms. There is an algorithm for just about any maneuver on a Rubik’s Cube. "

While a common beginner method is solving the cube one layer at a time, there are countless ways to approach this classic puzzle. 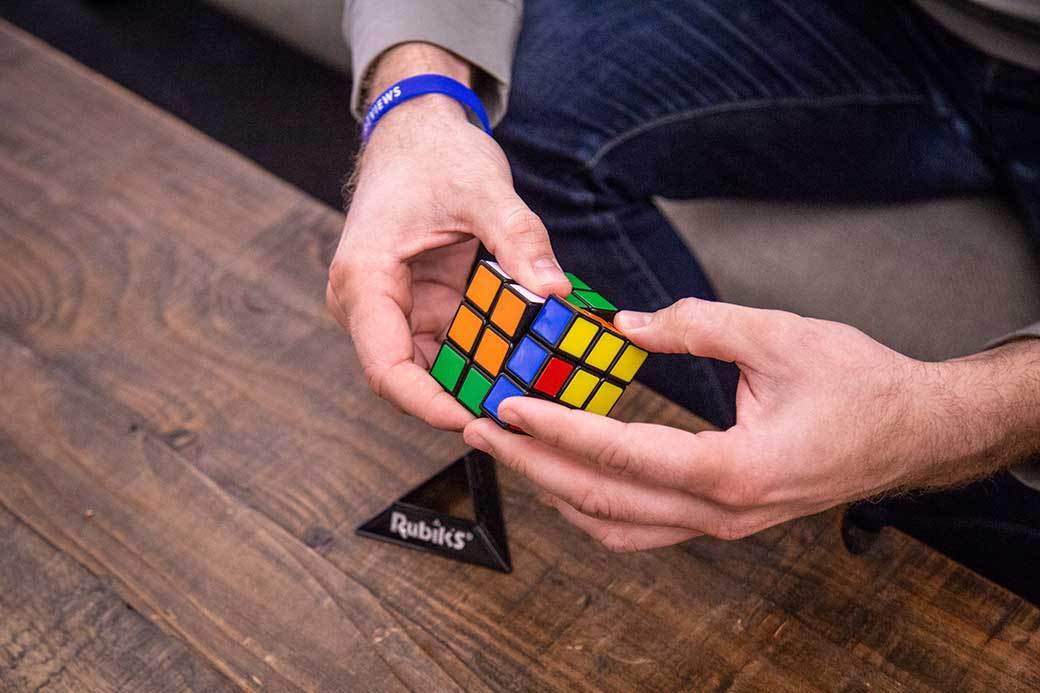 There are over 43 quintillion ways to scramble a Rubik’s Cube. That means that when you mix up your cube, there’s a good chance no one has ever seen that particular pattern before.

Q. Are Rubik’s Cubes safe for young children?
A.
Due to the possibility of pieces popping out, Rubik’s Cubes are recommended for children ages eight and older. Though the puzzle is too difficult for most young children to solve, they may enjoy twisting and turning the cube.

Q. Can a Rubik’s Cube be disassembled?
A.
Yes, and many speedcubers regularly take their cubes apart to lubricate and tune them. To take a cube apart, turn the top layer 45?. Then pop out an edge cube from the top layer. It should come free if you pry it with your thumb. From there, the rest of the pieces should come apart easily.

Q. Are there other puzzle cubes not made by the “Rubik’s” brand?
A.
Yes. Since the patent for the original Rubik’s Cube has expired, numerous other companies now produce similar cubes. In most cases, these are specifically designed for speedcubing. 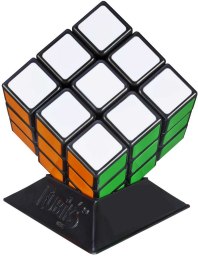 Best of the Best
Hasbro Gaming
Rubik's 3X3 Cube
Bottom Line
Suitable for everyone from novices to masters, this Rubik's Cube is affordable and fun.
Shop Now 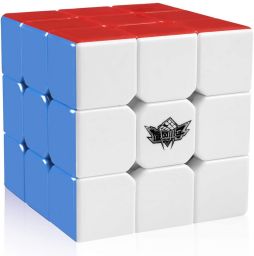 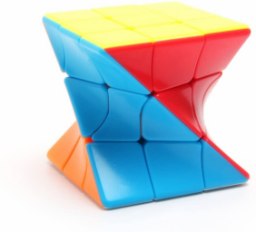 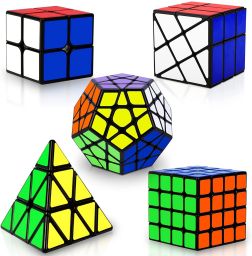 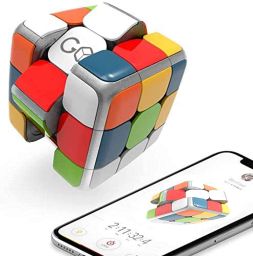 Top Pick
GoCube
Connected Electronic Bluetooth Cube
Bottom Line
The innovative Rubik's cube that is electronic and has its own app.
Shop Now 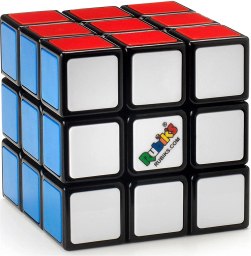 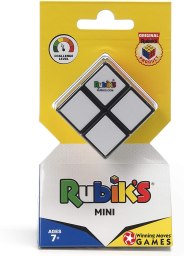 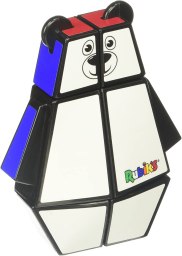