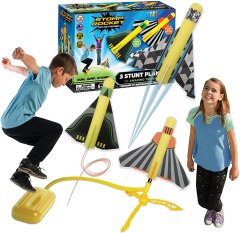 These stomp-powered stunt planes are ideal for older kids who need something a little more entertaining.

Angle of the launch can be adjusted. More fun than the original. Adults and kids will enjoy it. Kids tend to play with this for a long time. Fun to do. No batteries required. Planes go a long way.

Does not shoot directly vertical. You will need a large open area for this toy. 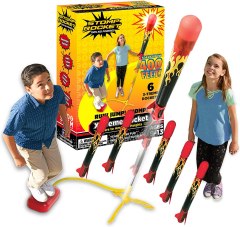 These high-flying rockets can launch an impressive 400 feet with the right stomp.

Easy to use. Older kids will get a thrill without a high cost or the need for a power cord. No batteries. Comes with 6 rockets. Adults will also really enjoy these rockets. A good gift for a middle schooler or teen.

Because of their range, you may lose these rockets in this set more easily. 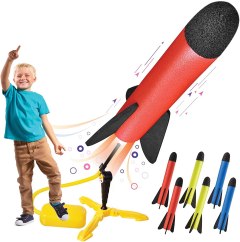 This set's heavy-duty foot pump helps it stand up to serious stomping.

Rockets shoot up to 100 feet. Includes 8 rockets in a variety of colors. Several users report that the foot pump is sturdier than others they've tried. Older children can assemble the launch assembly by themselves.

Several report the fins fall off the rockets rather easily. 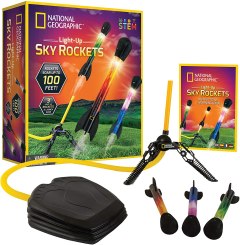 Light-up rockets make this set fun for play after dark as well as during the day.

Comes with 3 rockets outfitted with LED lights. Includes insert with experiments and physics facts. Launch base can be adjusted to change angles and range. Replacement rockets are available for purchase.

A number of users questioned this set's range, as well as its durability. 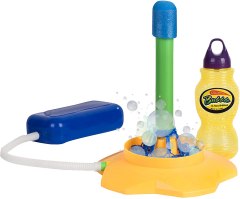 Creative set that delights children by shooting a trail of bubbles during each launch.

Releasing a trail of bubbles as it launches. Shoots about 28 feet into the air. Includes a starter bottle of bubble fluid. Size, smaller range and bubble component make this set best suited for younger children.

Stomp Rockets are simple and easy to use, allowing kids of all ages to send foam-tipped rockets flying through the air. Their advertised distance of up to 400 feet is no joke — you really can send these things flying. From hand-launched rockets to rockets with wings that can perform tricks, there are plenty of models to choose from.

While most Stomp Rocket sets work well for kids of all ages, they vary in distance and design. Some rockets glow in the dark or light up with LEDs, while others have streamlined designs to reach maximum distances. The number of rockets included in a set ranges from three to ten, but you can always purchase a refill pack if rockets go missing or you want to expand your fleet.

Stomp Rockets are fun for everyone and can be very safe if used properly. Most sets are fairly inexpensive, but it’s still important to find the right set for you and your kids. Learn more about the types of Stomp Rocket sets available. 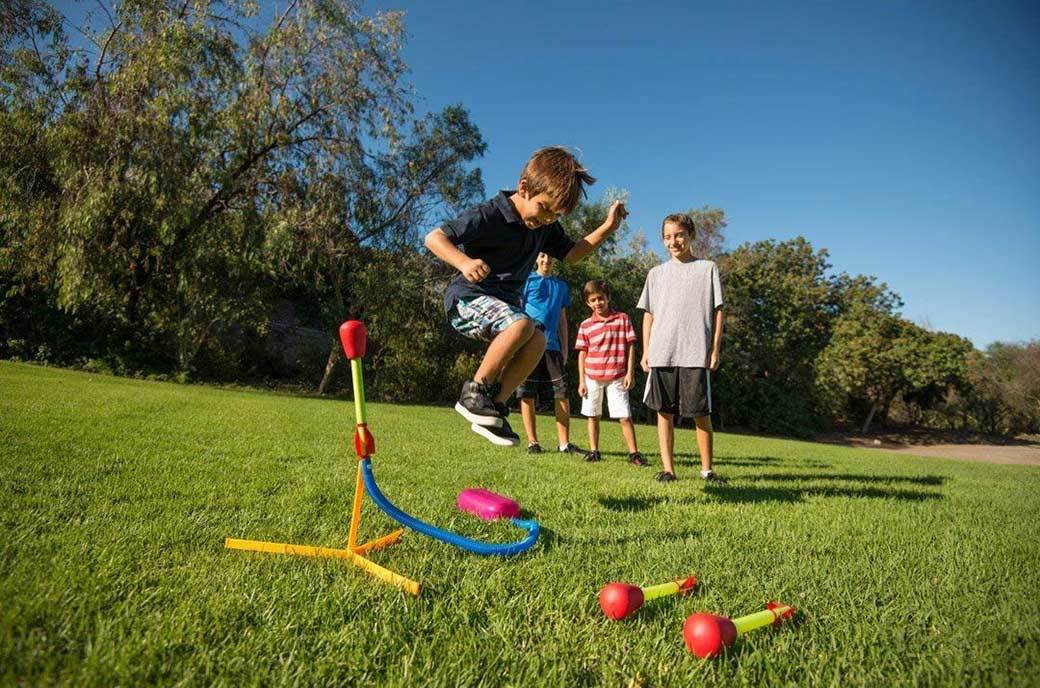 Stomp Rockets are rugged in design and can withstand countless afternoons of sky-high launches.

What are Stomp Rockets?

The concept behind Stomp Rockets is simple: send a toy rocket flying with a blast of compressed air. There’s no fuse and no flame, nor are there any electronic or mechanical components (with the exception of the LED models).

A Stomp Rocket launcher consists of a launch stand, hose, and launch pad. When stomped on, the rubber launch pad forces air through the hose to the rocket, sending the rocket flying at high speed and making a satisfying pop. With most sets, the stand can be adjusted to change the angle of the rocket.

The height a rocket travels depends on the weight of the user and how quickly they extend their legs as they stomp on the pad. As a result, younger children aren’t able to send a rocket flying nearly as high as a teenager or adult can. This is one reason why these simple toys are so much fun for the whole family.

Expert Tip
If you’re going for distance, put your launch stand at a 45° angle. This law of physics applies to launching any projectiles, including Stomp Rockets.
STAFF
BestReviews

Stomp Rocket sets vary in design, which impacts how a rocket flies and how far it can go. Some sets are designed for style, while others are made for maximizing height and distance.

These sets are made to be enjoyed by users of any age. The rockets don’t do anything fancy, but they can still go high and far.

Some rockets have wings that make them fly in unconventional paths. These sets generally include rockets with differently shaped wings for loops, twirls, and long glides.

If maximum height and distance are what you’re after, consider a Stomp Rocket set designed to reach heights of up to 400 feet. Younger children may struggle to launch these rockets that high, but older children and adults can have a lot of fun seeing who can send a rocket the farthest.

For keeping the fun going when the stars come out, there are glow-in-the-dark Stomp Rockets and models with built-in LED lights. Glow-in-the-dark sets need to be left under a light for a short time to be visible in the dark, while LED models have batteries that can be depleted over time and aren’t replaceable.

Expert Tip
If you lose a few rockets, refills are available for most sets and are fairly inexpensive.
STAFF
BestReviews

Stomp Rocket sets vary in the number of rockets they include, the design of the stand, and the materials that make up the rockets.

If you want to spend less time picking up rockets to relaunch, consider a set that includes six or more rockets. This is also a good idea if your kids have a tendency to lose track of their toys. The plastic rockets can break if stepped on, so having a few spares can be handy.

Most Stomp Rocket stands can be angled, allowing you to send your rockets flying vertically or horizontally for height or distance. Some stands are made to launch two rockets at once. These can’t be angled (they only launch rockets vertically), but the ability to launch two rockets at once is fun. In addition, some stands are sturdier than others and easier to keep upright on uneven surfaces.

Most rockets have a plastic body and foam tip to prevent injury, but some models are made entirely of foam. In general, plastic rockets tend to soar higher and hold up better in the wind, but the smaller foam rockets are the safer option.

Most Stomp Rocket sets that cost $5 to $10 are handheld squeeze launchers. While these don’t come close to the distance of regular launchers, they’re a good option for young children, and they can be used indoors.

For $10 to $20, you’ll find a variety of sets that range from basic to glowing rockets and dual launchers. If you’re looking for a basic set that can reach heights of 150 to 200 feet, you’re likely to find one in this range that meets your needs.

Stomp Rocket sets that cost $20 to $30 may include trick rockets or maximum-distance rockets. These are a great choice for older children who really want to see their rockets soar.

Expert Tip
Unlike model rockets, no fire or electricity is involved in the high-velocity flight of a Stomp Rocket.
STAFF
BestReviews 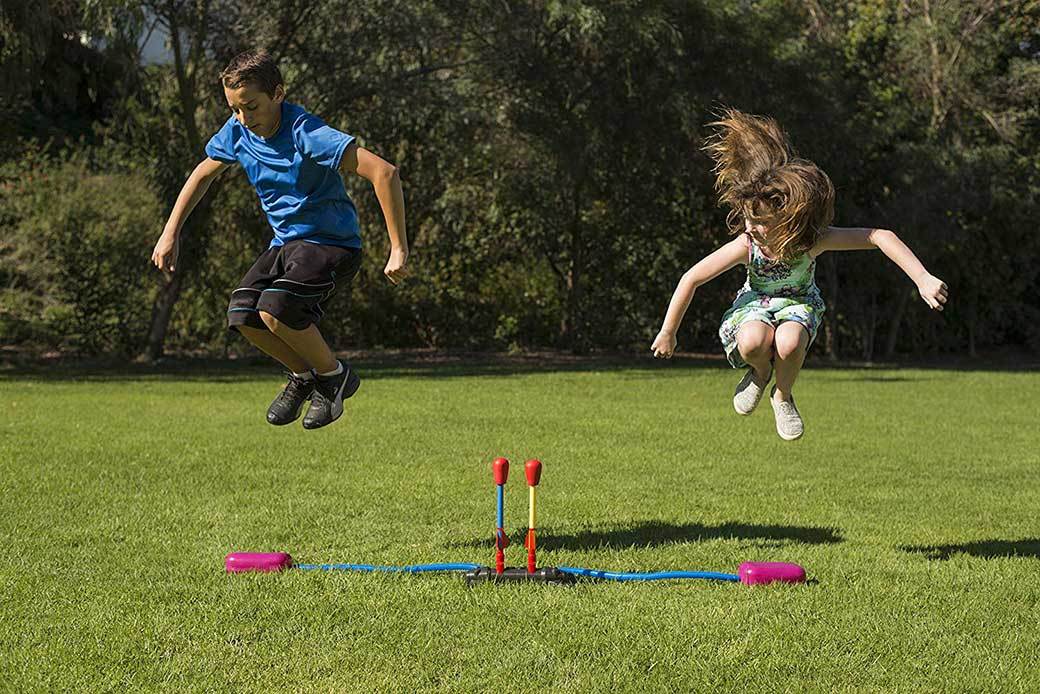 While Stomp Rockets can take off very quickly, they come down softly and are unlikely to hurt anyone on their descent.

Q. Are Stomp Rockets from one set compatible with other launchers?

A. Not necessarily. The diameter of the launcher tube can vary from one set to the next. Your best option for mixing sets is to buy two of the same set or refills designed specifically for your set.

Q. How safe are Stomp Rockets?

A. As with any toy that launches projectiles, there is a risk of eye injury with Stomp Rockets. However, the foam tips are unlikely to cause injuries to other parts of the body. If you’re concerned about your children’s safety, don’t let them play with Stomp Rockets unsupervised and be sure to teach them not to aim the launcher at anyone’s face.

A. The launch pads are designed to be jumped on again and again. The rockets, however, may have plastic bodies that can crack if stepped on, resulting in a loss of power. 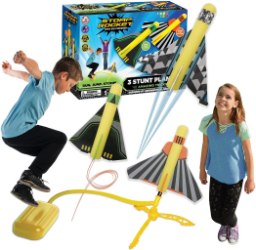 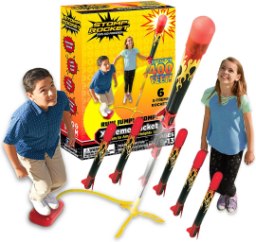 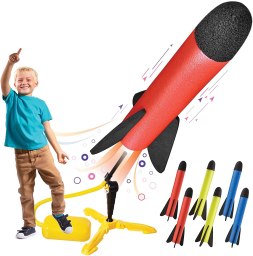 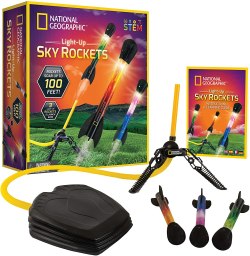 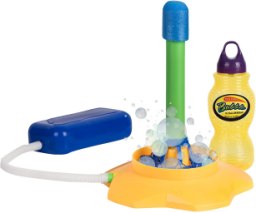