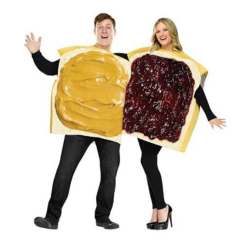 This easy-to-wear costume is great for tight-knit couples that go together like peanut butter and jelly.

Some found the collar to be itchy. 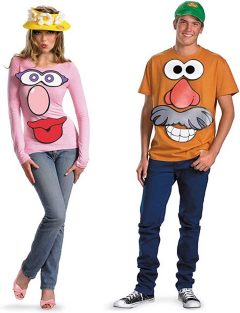 An easy and inexpensive last-minute costume, but you'll need to supply your own shirt (that you don't mind not wearing again).

Made from 100% polyester. Consist of felt parts and hats for both Mr. and Mrs. Potato Head. Good last-minute costume that is easy to set up. Affordable price.

Shirts are not included, just the felt parts. The tape on the felt can leave some residue on shirts, ruining them. 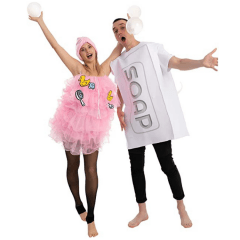 A fun costume set that will fit most body types and works well for friends as well as couples.

Customers noted that the loofa is not very fluffy and the balloons did not stick very well. 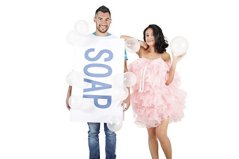 A fun costume set that will fit most body types and works well for friends as well as couples.

Costume set includes a bar of soap costume, a loofah costume, and 10 clear balloons with Velcro. Both are One Size Fits Most and comfortable. Good quality. 100% polyester. A real hit at parties.

Velcro balloon attachments don't stick very well to the costumes. The loofah costume tends to ride up a bit, so dress accordingly.

Halloween is loved by adults and kids alike. Many love the opportunity to be someone else for the night, or to have an excuse to binge on candy to their heart’s content. Solo costumes are fun, but many romantic couples (or friends, for that matter) opt for Halloween costumes for couples. Though each outfit can look good as a standalone, couples costumes are meant to complement one another.

Before you add a few costumes to your shopping cart, there are some factors you’ll want to consider. Your personal style and interests matter, since it increases the chance that you’ll wear or repurpose the costume year after year. You should also think about the material the costumes are made of, skin coverage, available sizing, and price. 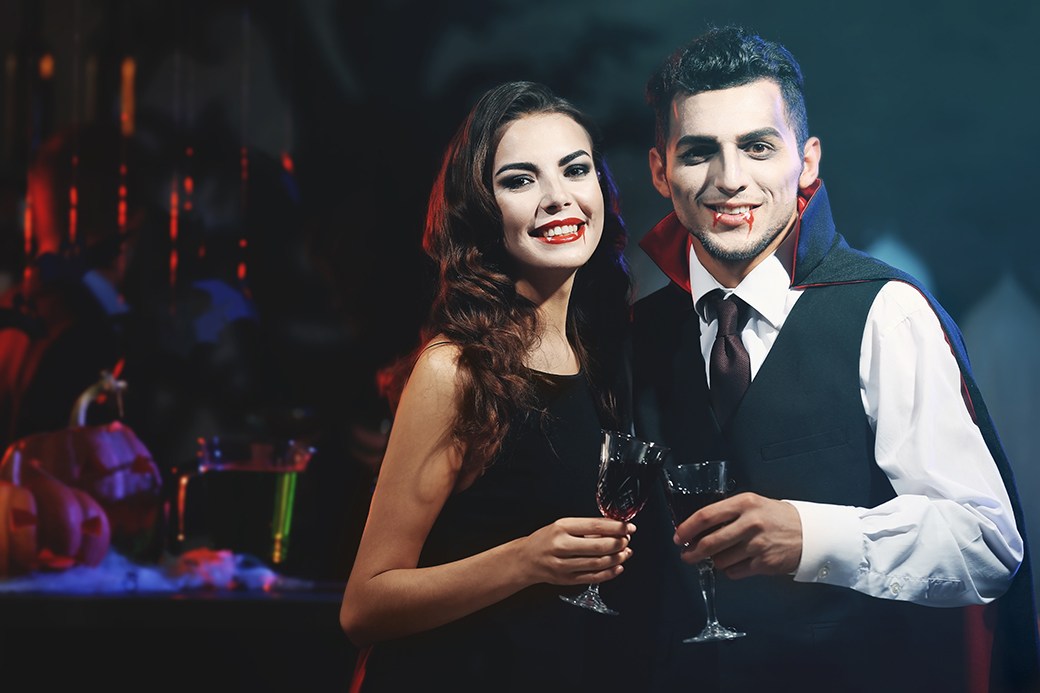 If you’re not much of a movie or TV watcher, opt for a literature-inspired Halloween costume for couples. Many popular books have had film adaptations anyway, so you’ll be recognizable.

How to buy the best Halloween costumes for couples

Halloween has ancient roots, tracing all the way back to the Celtic festival of Samhain. Samhain marked the end of summer and the start of winter, or the “darker half” of the year. According to Celts, Samhain was also a day when the boundaries between the living and dead worlds would blur. Halloween evolved from this holiday and remained widely celebrated in medieval England and Ireland. Around the fifteenth century, people started wearing scary costumes that represented spirits and demons. They’d also sing songs and enact folk plays.

Halloween wasn’t very popular in colonial New England, as it clashed with some puritanical beliefs. The wave of Irish immigrants that began in the eighteenth century brought the holiday to a wider American audience. It was quickly embraced, particularly by rural Americans who leaned into the spooky aspect of getting dressed up. People would wear intentionally scary costumes that would completely obscure the original wearer. Items such as ghoulish masks, sheets, heavy makeup, and head-to-toe disguises were quite common.

By picking a Halloween costume for couples that suits your personal style (and that of your costume partner’s), chances are better that you’ll wear the costume again. If you and your costume mate have a fun or whimsical style, you might consider looking into costumes based on movie characters. Period costumes from the 1960s, ‘70s or ‘80s may be particularly appealing. If you both prefer something more understated, consider a more classic costume, like a pair of pumpkins, or turn up the style a notch and dress as Addams Family members.

T-shirt Halloween costumes for couples are a great choice for a low-commitment, low-cost option. As the name suggests, these costumes consist of a graphic tee as a main component.

Pop culture couples and duos are a fun choice and a great conversation starter at a party. Consider you and your costume mate’s favorite TV shows and movies, scary or otherwise. Some popular pop culture Halloween costumes for couples include characters from Game of Thrones, Scooby Doo, Beauty & the Beast, the Jim Henson Universe (like Kermit and Miss Piggy), Harry Potter, and characters from the respective DC and Marvel universes.

Halloween costumes are largely made from polyester blends, latex, and less commonly, cotton. Cotton is the least common fabric for Halloween costumes for couples. Quality cotton is more expensive to manufacture. The cotton costumes you’ll come across are likely blended with polyester or other fabrics.

Polyester is a popular choice because it’s cost-effective to produce, durable, breathable, and dries quickly. Unlike cotton, polyester is also wrinkle-resistant. Some polyester Halloween costumes for couples are machine-wash friendly but double-check the label to be certain.

You’ll find latex in quite a few Halloween costumes for couples, especially those with a skintight fit. Latex makes Halloween costumes a little more forgiving when it comes to fit, but it can also degrade pretty quickly. For costumes with high latex content, it’s recommended to gently hand wash or machine wash on delicate.

Pajama sets can actually provide great inspiration for Halloween costumes for women, especially those that are animal or character-based one-piece sets.

What features do Halloween costumes for couples have?

Some Halloween costumes for couples are listed as “one size,” though few articles of clothing are truly one size fits all. If sizing is a concern, look for costumes without a form-fitting component. These include a piece that hangs off the shoulders to cover the chest and back, and the sides and the bottom of the piece are open. 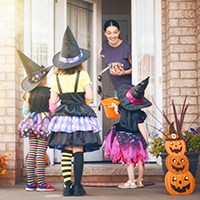 Did You Know?
The tradition of trick-or-treating comes from the medieval practice of mumming, in which actors in costume would perform outside and in people’s homes for entertainment.
Staff
BestReviews

How much do Halloween costumes for couples cost?

As is the case with most clothes, you get what you pay for when it comes to Halloween costumes for couples. That being said, there are plenty of budget-friendly options available. At the $35 and under range, you’ll find a lot of T-shirt costumes. Other costumes are primarily made from polyester and/or latex. These are lower in quality but a good choice if you don’t want to spend too much.

In the $35 to $60 range, you can find a wider variety of Halloween costumes for couples that reference pop culture figures. More of these costumes contain a blend of polyester and cotton fabric. Some costumes may be more ornate in design, requiring gentle hand washing or dry cleaning.

If you want to invest in a quality Halloween costume for couples, $60 and more offers higher-quality fabrics such as cotton, velvet, or even leather. These costumes may include extra accessories and makeup to go along with them.

If you’re DIY-minded, you can alter the look of your costume by staining it with tea, flour, coffee grinds, or dirt to make it look aged. Do some research first, as you don’t want to ruin the costume permanently. 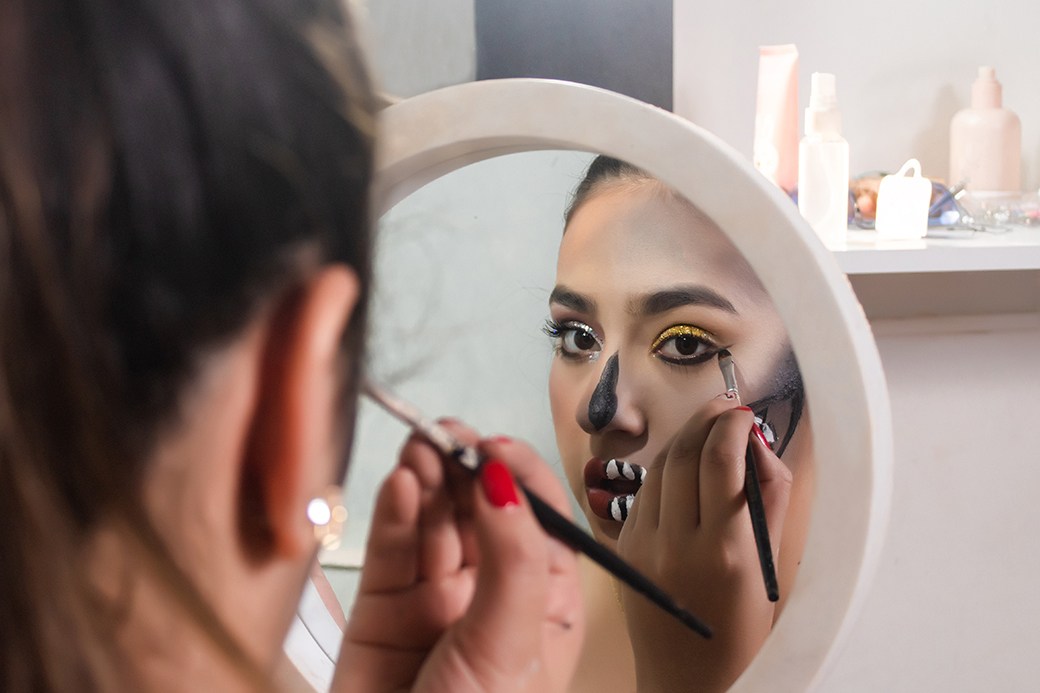 If you already have a solid makeup selection, there’s no need to purchase costume makeup — you can make your own face paint or even fake blood using household materials like baby powder, corn starch, corn syrup, and/or food dye.

Q. What are some of the most common Halloween costumes for couples?

A. Some of the most common costumes for couples are ketchup and mustard, Baby and Johnny from Dirty Dancing, Aladdin and Jasmine, bacon and eggs, Princess Peach and Mario, and Barbie and Ken.

A. They don’t have to be. Some people may frown upon matching outfits in general (especially for couples), but if you choose a costume that’s true to the personality and interests of the costume wearers, it won’t come off as corny.

Q. Can Halloween costumes for couples be scary?

A. Yes. If you need some ideas, think of famous scary or creepy movie duos. Some face paint and makeup can take your costume from mildly unsettling to downright scary. 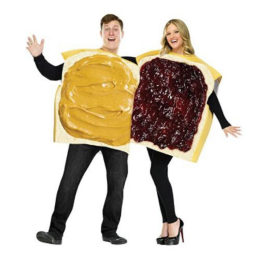 Best of the Best
Fun World
Adult Peanut Butter and Jelly Costume
Bottom Line
This easy-to-wear costume is great for tight-knit couples that go together like peanut butter and jelly.
Shop Now 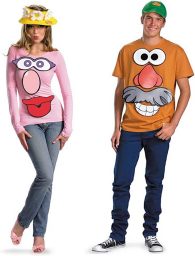 Best Bang for the Buck
Disguise
Mr. and Mrs. Potato Head Costume Kit
Bottom Line
An easy and inexpensive last-minute costume, but you'll need to supply your own shirt (that you don't mind not wearing again).
Shop Now 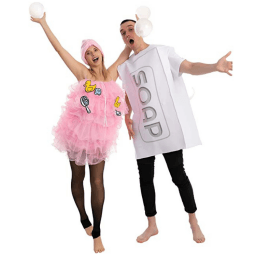 Top Pick
Spooktacular Creations
Loofah and Soap Costume for Adult Group or Couples
Bottom Line
A fun costume set that will fit most body types and works well for friends as well as couples.
Shop Now 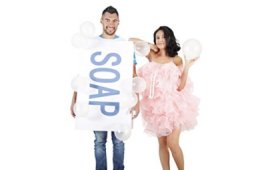 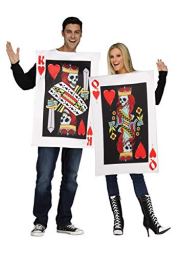 Top Pick
Fun World
King and Queen of Hearts Costume
Bottom Line
These costumes are durable, comfortable, and easy to accessorize with crowns or scepters to take them to the next level.
Shop Now 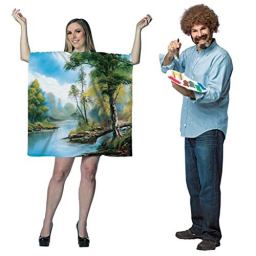 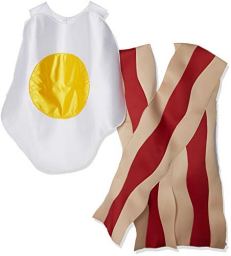 Top Pick
Rasta Imposta
Bacon Eggs Couples Costume
Bottom Line
A fun and comfortable costume that you can build off, but prepare to add a cape or something else to it to cover up the back.
Shop Now 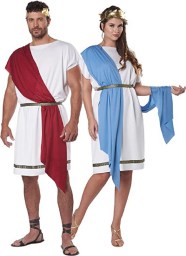