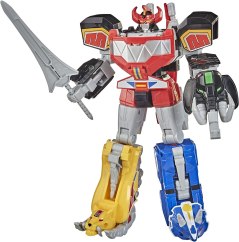 An awesome toy that breaks down into individual figures for maximum fun.

Contains every Dinozord you need to transform into the powerful Megazord. When fully combined, the figure is articulated well when it is in mega form. Easy to put together and take apart on the fly. Durable pieces.

Some of the individual zords aren't as articulated as the full figure. 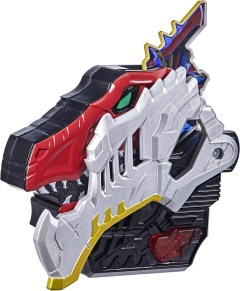 This wrist-mounted toy is both durable and fun to play with to make you feel like a part of the show.

Inspired by the piece that the rangers wear in the "Dino Fury" season of Power Rangers. Works with various keys from different figures to unlock unique sounds. Comfortable to wear for extended periods of time.

Won't be able to fit on larger adult-sized wrists. 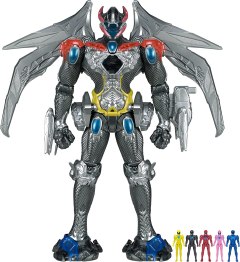 A durable figure that has multiple interactive features for a fair price point.

Very large and durable, with 5 Ranger figures included that fit into specific compartments. Well balanced, it stands on its own. Exciting features like expanding wings, lights and sounds.

Figure’s cockpits for the 5 included mini-characters are hard to open. 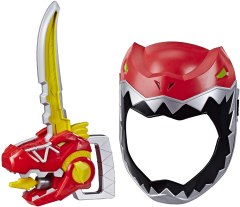 A great way to jump into Power Rangers without spending too much upfront.

Tops the want list for many preschoolers. Encourages active and imaginative play. Pairs well with Power Rangers costume. A fun and inexpensive gift.

Only 1 projectile is included, which may frustrate young kids. 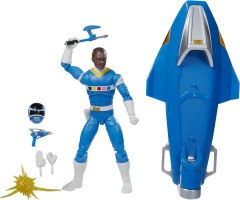 With an inspired look from "Power Rangers in Space" this is a great toy for nostalgia-driven collections.

Multiple points of articulation. Comes with a variety of hands, accessories, weapons, and a galaxy glider. Has a durable and high-quality feel to the plastic itself. Easy to maneuver into different positions.

The included pieces are rather small making them easy to misplace.

Among some of the most entertaining and unforgettable kid-oriented shows since the 1990s is Power Rangers. This long-running series tells the story of high-school students who became protectors of Earth using a combination of special powers, giant robots, and martial arts to battle alien invaders. The cartoonish action and absurd creatures captured the imagination of many youngsters, and toys and merchandise became a big part of the appeal.

Kids embraced the heroic action figures, grotesque monsters, and interconnecting machines. In the more than a quarter century since Power Rangers made it big in North America, there have been numerous iterations of the show, each with its own unique look and style. Since 1993, Bandai and then Hasbro has been making Power Rangers toys, which means there are a lot of different toys available for both adults who loved the series in years past and new audiences looking to take part in the fun.

If you’re looking for Power Rangers toys for yourself or a young fan, our buying guide has all the information you need. We’ve included some recommendations to get your shopping started too. 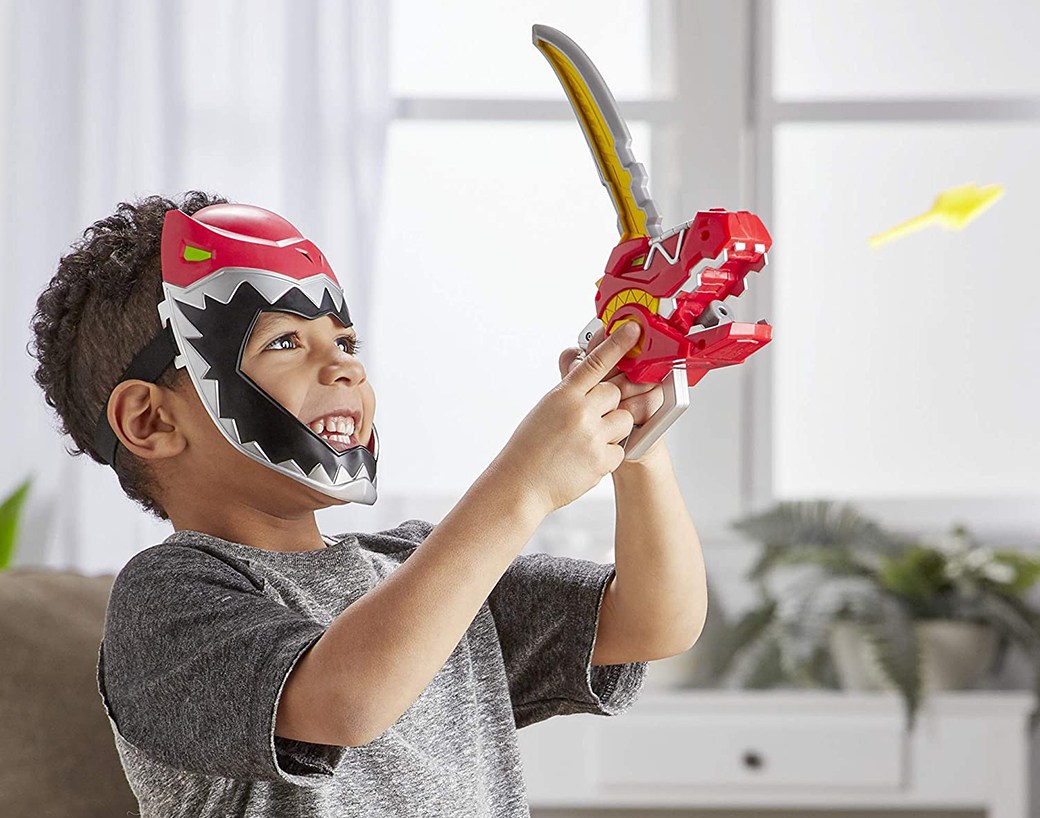 Power Rangers was based on Super Sentai, a long-running Japanese show that first aired in 1975 and continues to this day. Power Rangers even uses footage from Super Sentai for many action sequences.

“Mighty Morphin Power Rangers” debuted in 1993 and instantly gained a dedicated fan base. The series has changed slightly every season or two, with new actors taking on slightly different versions of the characters, though the premise remains more or less the same. Notably, as the series changes, so do the costumes, which means there are always new toys to purchase.

There have been 21 different iterations of the TV show, as well as three films with their own unique styles, and there are toys modeled after every single one. However, most of the toys are not produced for long and some can be difficult to track down.

There are a few active series of toys in production.

Action figures: Most Power Rangers toys are fairly straightforward action figures. They have articulated body parts that move and allow for interactive play. Most action figures include accessories that can be worn or held by the character. Action figures range in size from around 4 inches to 12 inches tall depending on the series.

Wearables: There are also role-playing toys that are designed for kids to wear and act as their favorite Power Rangers. These typically take the form of Morphers, which are meant to be held and shown off. Other role-playing toys include gloves, as well as larger accessories like swords or staves.

Plush toys: While not as popular, there are also Power Rangers plush toys available for younger kids or those seeking something soft and cuddly for playtime or nap time.

One recognizable Power Rangers feature is color coordination. Each young hero has a monochromatic suit (in the original, they are red, blue, black, pink, and yellow; a green Ranger joined later and eventually turned into the white Ranger). While red and blue Rangers appear in every series, the other colors change frequently. Some series also include metallic or tinted suits that may appeal to some kids. 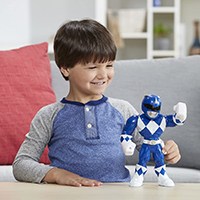 Did You Know?
The Power Rangers series has had a lot of different homes on TV and was even canceled in 2008. The first half of the inaugural 1993 season was rebroadcast in 2010 before a new series was released the following year.
Staff
BestReviews

While most Power Rangers toys are geared toward kids ages 8 and up, in 2019, Playskool began selling toys geared toward younger children. These large and bulky action figures are easy for those ages 3 and up to manipulate and play with. They also lack small accessories or easily breakable parts to avoid any choking or other hazards. Some of these toys also include minor interactive elements like buttons that can be pushed to slightly alter the toy.

One iconic aspect of all Power Rangers is the heroes’ ability to summon their own animal-like robotic vehicle (often a prehistoric creature) to do battle with large foes. These Zords (essentially giant battle machines) combine to form a larger build called a Megazord. These are among the most popular Power Rangers toys available, particularly the classic Megazord. Akin to a Transformer, the pieces can be played with individually or combined into a larger articulated toy.

This toy series was released between 2016 and 2019 and features action figures that stand 6.5 inches tall and include increased detail and improved overall quality over earlier toys. These toys were inspired by the original series and the 2017 film reboot. In addition, the toys derive from a few of the more popular series, including Dino Thunder, Zeo, and Power Rangers in Space.

As of 2019, the Lightning Collection is the current series of toys and includes over 90 action figures and role-playing toys. The action figures are 6 inches tall and have more points of articulation — for more poses — than other Power Rangers toys. These come with more accessories too, including interchangeable hands and weapons the toys can hold. Additionally, these toys have interchangeable heads with a civilian option as well as the costumed look.

This popular maker of vinyl collectible figurines offers a range of Power Rangers, including heroes, villains, and the classic Megazord. Rangers come in versions with or without a helmet and are mostly styled after the original series, the latest film, and a few of the more popular series. Some of the more memorable villains, such as Goldar and Pumpkin Wrapper, are also available. Note that Funko figurines are meant to be displayed and are not ideal as toys for younger kids to play with.

In addition to toys, there are plenty of other ways young Power Rangers fans can embrace the show. There are comic books, video games, costumes and apparel, and bedding and blankets.

For $20 or less, you can find Playskool toy options and some single action figures and Funko figurines.

Most Power Rangers toys cost between $20 and $50. In this range is a wide assortment of action figures of various sizes and some Megazords.

Some Megazords, as well as rare, coveted action figures cost $50 and up. Role-playing accessories are also available in this range. 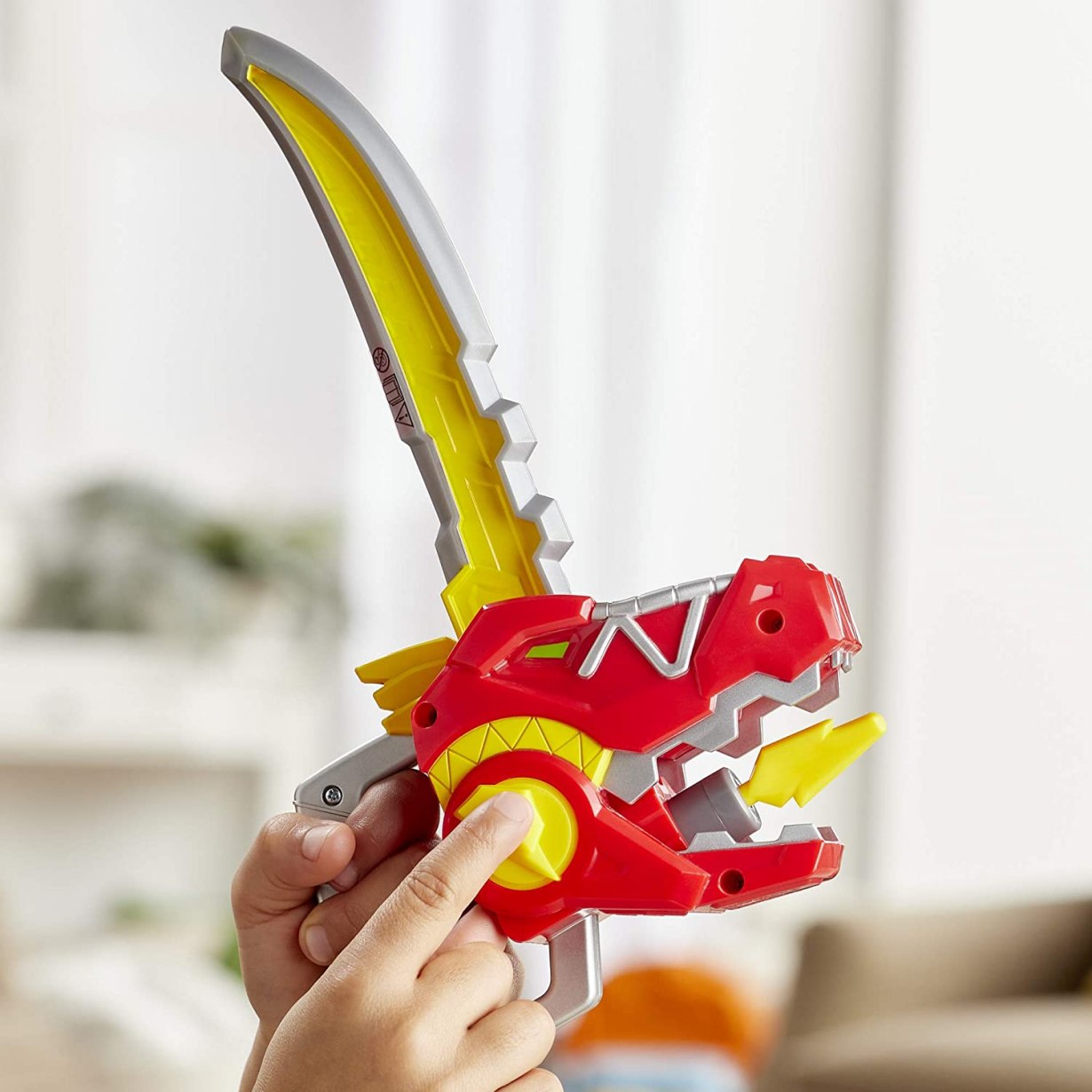 Did You Know?
The original Megazord was and still is one of the most popular Power Rangers toys. It features a red T. rex, blue triceratops, pink pterodactyl, black mastodon, and yellow sabre-toothed tiger.
Staff
BestReviews 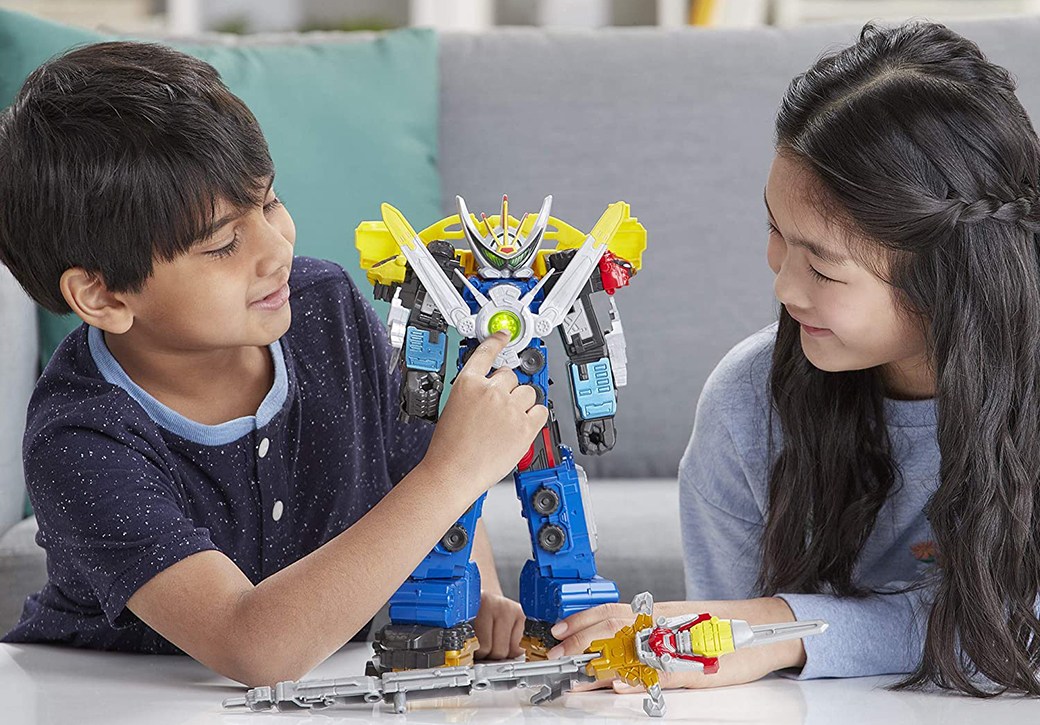 Power Morphicon is a Power Rangers fan event that takes place every two years in California. It enables stars from the series to meet with fans and serves as a launch point for new toy series.

Q. Where do I start if I’m buying the first Power Rangers toy for my child?

A. With 21 different series and counting, from Dino Thunder to Dino Charge, Wild Force to Mystic Force, it can be confusing to keep track of the Power Rangers versions and decide which one to buy first. It’s best to find out which series your child most enjoys. If they’re watching more recent episodes, there are matching toys readily available. Most kids enjoy the original version of the characters, which generally serves as the basis for the newer films. A few Rangers and a couple of villains make for a good start, and a Megazord provides plenty of interactivity and variety as well.

Q. Are older Power Rangers toys worth anything?

A. Anyone who has been amassing Power Rangers toys over the years might be wondering if some discontinued and rare toys are worth more now. While you might have rare, coveted toys collecting dust in the basement, unless they’re in mint condition they likely aren't worth much more than sentimental value. However, there are some products, particularly Megazords, that may have some value. There are many rare toys still in their packaging posted for hundreds of dollars on secondary market websites, but they may not actually sell for those prices.

Q. Are there Power Rangers toys for adults?

A. There are plenty of adults who were kids in the 1990s and enjoyed the series, and while it might not be something they watch today, the toys can bring back lots of memories.

The film attracted a wide age range of audience interest, catering to younger fans as well as older Millennials, and a new film is likely to do the same. That means that while adults may not want to play with the Power Rangers toys the same way kids do, they might want to have one, such as a Funko vinyl figure, displayed as a decoration or memento. 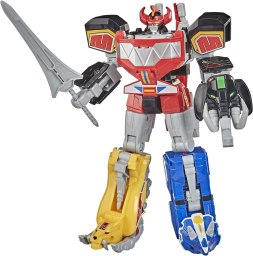 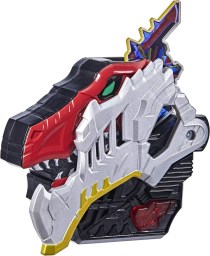 Best Bang for the Buck
Power Rangers
Dino Fury Morpher
Bottom Line
This wrist-mounted toy is both durable and fun to play with to make you feel like a part of the show.
Shop Now 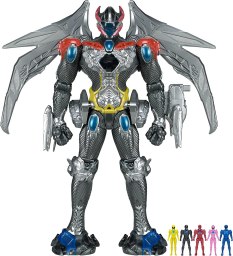 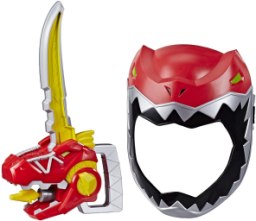 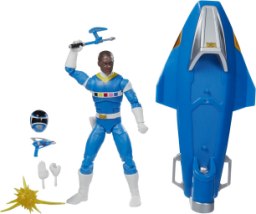 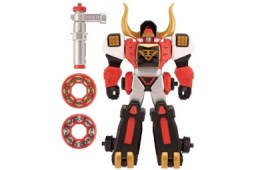 Top Pick
Power Rangers
Megazord Bull
Bottom Line
Like other Power Rangers, its stickers tend to peel off, but this Bull Megazord is a favorite of kids regardless.
Shop Now 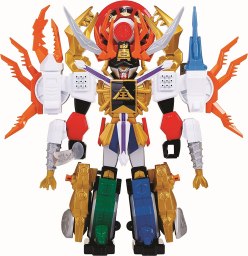 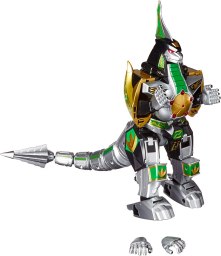