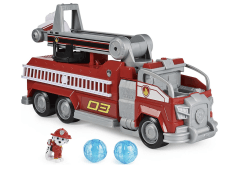 This interactive fire truck is equipped with fun lights, sounds, and accessories to keep your children entertained all afternoon.

Not as many features as older versions. The top back can be hard for smaller children to open.

For kids who like to collect the different Paw Patrol characters and their racers, this is a great set. Three for the price also makes it a good deal.

Characters can't be removed from vehicles. Some reports of wheels not moving smoothly. 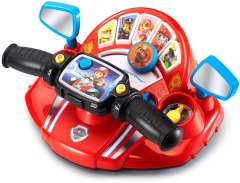 The toy to pick for kids who love to simulate Paw Patrol action, but keep in mind that it's best suited for ages 2 to 5.

An interactive toy that puts kids behind the controls of Ryder's rescue ATV. Action-packed fun like the show, thanks to buttons, signals, and horns that simulate driving. 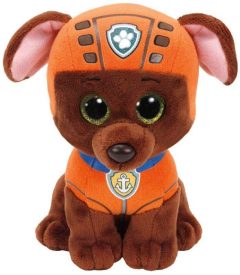 A soft stuffed animal from a trusted brand featuring a main character.

May be smaller than advertised. 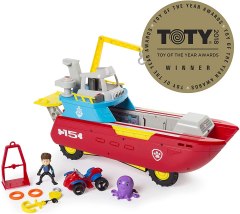 Offers lots of fun features and a great way for kids to indulge in action play with a versatile rescue vehicle.

A well-made toy packed with fascinating details and movable parts that stimulate the imagination. Comes with Ryder and his rescue ATV. Has lights and sounds that kids love.

Large. Have to buy pups separately.

PAW Patrol has risen in popularity until it’s now a household name for many families with children ages three to eight. What kid doesn’t love puppies – puppies in training to be rescue dogs? That’s a hard one for preschoolers to resist, especially since they’re in the midst of life training themselves.

As with any popular show, collecting the accompanying toys is half the fun, and PAW Patrol toys let kids act out the adventures at home. First and foremost, toys should be fun, but they can also be educational, and PAW Patrol toys are both. If your little one loves the show and its cast of characters, you’ve got a lot of options on the market. 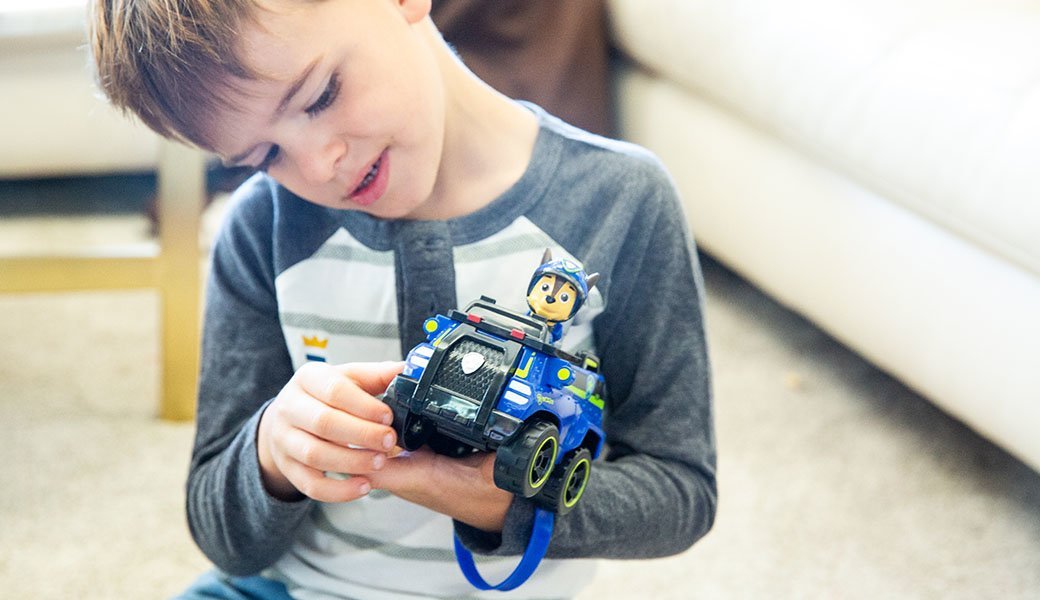 PAW Patrol stories are designed to teach kids about bravery and heroism. These virtues are taught with stories that don’t get too intense or scary for young kids. Early exposure to these principles can help kids develop courage and a sense of civic duty.

PAW Patrol action figures feature one of the main characters along with rescue gear and sometimes an action card, pet or animal friend, or rescue vehicle. Some of these toys have interchangeable outfits or accessories like a surfboard that launches a life ring or rescue gear that can be attached when it’s time to get to work. These toys are small and inexpensive, making them a great choice for families on a tight budget.

PAW Patrol craft toys feature drawing or dough sets with molds. If you’re looking for a toy to use on the go, a dry-erase pup pad can easily fit in a diaper bag or purse. Dough sets help kids strengthen their hands and develop fine motor skills while using their imagination to create stories with the characters they create.

What child wouldn’t love an electronic version of their favorite pup? These toys are interactive and preprogrammed with PAW Patrol phrases and sounds. They can follow your child or spin in circles to perform another daring rescue. Other electronic toys include a Pup Pad where characters get their next assignment. Some can be used with cards that come with action figures to recreate the same scenarios that kids see in their favorite episodes.

Games teach kids how to follow rules and play with others in a fun but controlled environment. PAW Patrol games revolve around the training and adventures of the characters. Children can play as their favorite pups and learn some of the same lessons of kindness and support they learn by watching the show.

Playsets are for the serious fan with plenty of storage space. Car tracks, train tracks, and lookout towers can be used to recreate the PAW Patrol world. All the playsets are made to the same scale (however, additional action figures may not be). Most kids don’t mind using toys of a different scale, but there’s no guarantee that a vehicle bought separately will fit on a playset track.

The softness of plush toys makes them a favorite among children. These toys can be used for role-playing or snuggling while watching PAW Patrol. You can find plush toys of all the pups.

Half the fun of PAW Patrol is seeing the various vehicles, from a sea patroller to a helicopter to a bulldozer. Vehicles that move and spin let your kids enact the fun in their imagination. Many of the vehicles can be used alone or as part of a playset. PAW Patrol toys come in many favorite childhood vehicles like police car, fire engine, and jet.

Did you know?
If you’re looking for a stocking stuffer or small toy to surprise your child, mini figures can start a collection of favorite characters. The small sizes are perfect for little hands to manipulate.
STAFF
BestReviews

Toys are recommended for certain ages for your child’s safety. Toys that include small pieces that could be swallowed are usually inappropriate for children under the age of three. Most PAW Patrol toys are designed for children over age three. However, there are a few exceptions, mostly among the plush toys. Keep in mind that your best bet is to always follow the manufacturer’s age recommendations for its products.

PAW Patrol has an ensemble cast with several main characters. If you’re not sure where to start your search, ask your child about his or her favorite character. PAW Patrol characters each have a signature occupation, such as fireman or police officer, along with a corresponding vehicle. A favorite character with its rescue vehicle, gear, and outfit will make just about any die-hard fan squeal with delight.

Before buying PAW Patrol toys, consider how and where the toys will be stored when not in use. For homes with limited space, plush toys or action figures might work better than large games or playsets. 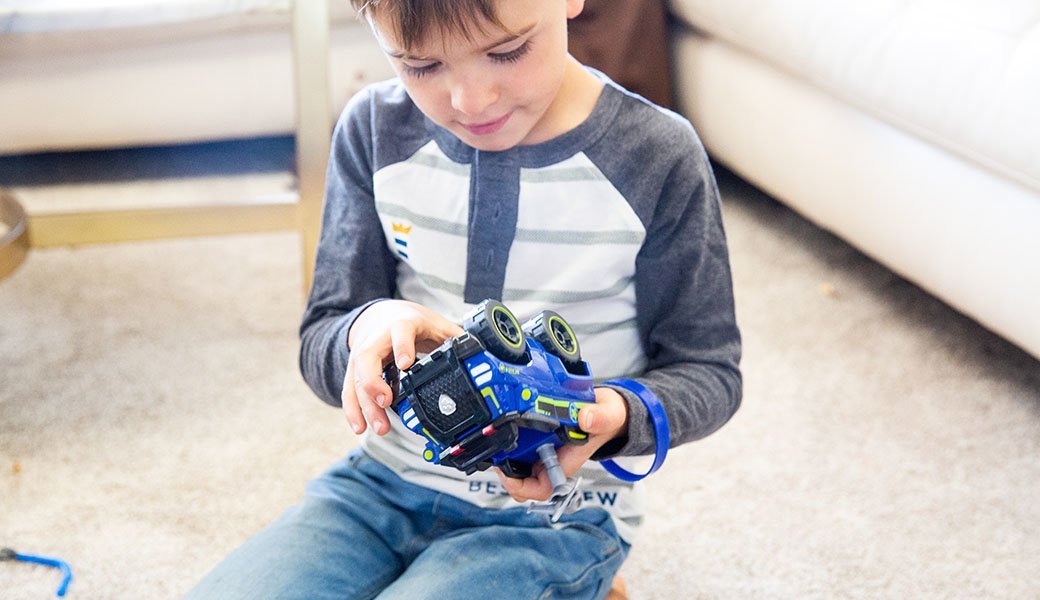 Not all the characters are pups. The PAW Patrol is led by Ryder, a ten-year-old boy who trains the pups and takes them on adventures. Kids love the pups, but they identify with Ryder.

A. The playsets come with at least one or two action figures and a coordinating vehicle. For example, the train set includes the engine and cars, while car sets include cars, trucks, and other rescue vehicles in the appropriate size. Additional characters and vehicles are sold separately.

Q. Do any of the PAW Patrol plush toys come with extra features?

A. Yes, some of the plush toys play music and have a light-up belly that serves as a nightlight. Others are simply soft toys best for cuddling and squishing.

Q. How big are the PAW Patrol vehicles?

A. PAW Patrol vehicles come in different sizes. There are small handheld ones that can be used independently or with playsets. There is also a wide selection of midsize vehicles, some of which transform into different configurations. Many of these vehicles, whether boat or helicopter, include wheels so they can be easily moved during play. To keep kids entertained, many vehicles include moving parts like buckets that lift, rescue hooks that can be fired, or turbines that change direction for a quick rescue. Large vehicles can carry several action figures or smaller vehicles, which means they also act as extra storage when not in use. 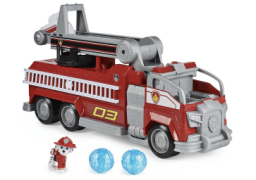 Best Bang for the Buck
Paw Patrol
Paw Patrol Rescue Racers 3-Pack Vehicle Set
Bottom Line
For kids who like to collect the different Paw Patrol characters and their racers, this is a great set. Three for the price also makes it a good deal.
Shop Now 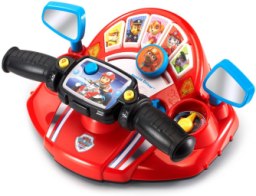 Top Pick
VTech
Paw Patrol Pups to the Rescue Driver
Bottom Line
The toy to pick for kids who love to simulate Paw Patrol action, but keep in mind that it's best suited for ages 2 to 5.
Shop Now 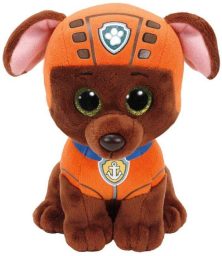 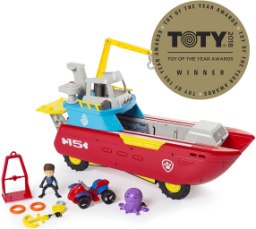 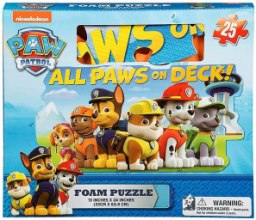 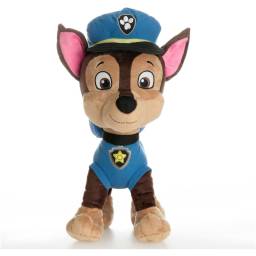