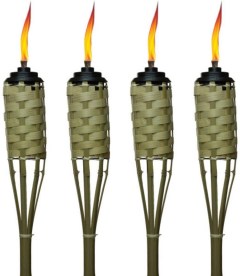 Add a stylish luau vibe at yard parties with this set.

Stick directly into ground. Earns top marks for lasting 8 to 10 hours. Made of high-quality material. Available in 4-pack or 12-pack.

If you don't take them inside during winter, they may rot or shred. 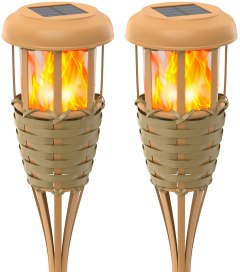 Consider this decorative outdoor design with a handmade finish.

Made with a weather-resistant material. Powered completely by solar energy. Comes with realistic flickering flame lights. Easy to install and does not require any screws.

Do not always stay upright in the ground and tend to wobble or lean. Poles are not made of real bamboo. 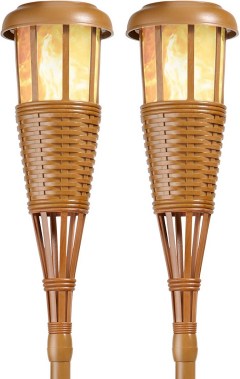 Because these don't use liquid fuel, they won't keep bugs away. 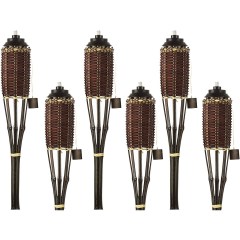 A durable option with an easy-fill canister.

The color may wash off easily if the unit become wet. 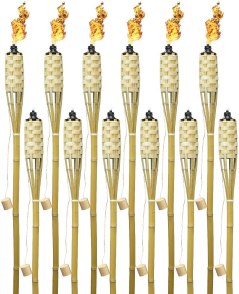 A pack of 12 oil-burning units ideal for outdoor entertainment.

Each comes with a refillable 16-oz canister that offers up to 5 hours of burn time and a snuffer cap to safely extinguish flames. Easy to install and refill.

Some reports of them arriving broken or with tightly screwed caps that were difficult to unscrew.

You’re wearing your Hawaiian shirt, with ukulele music on a loop in the background. You’ve got tropical drinks, leis, and a grass skirt at the ready in case the party really takes off. All this, and yet your luau is missing something. What could it be? Bamboo torches, of course.

These simple light sources add an inexpensive, festive element to any outdoor living space, whether you’re having a party or just hanging out with family. In addition to adding light and a tropical island feel to your deck or garden, bamboo torches may help to control mosquitoes and other biting insects depending on the oil used. 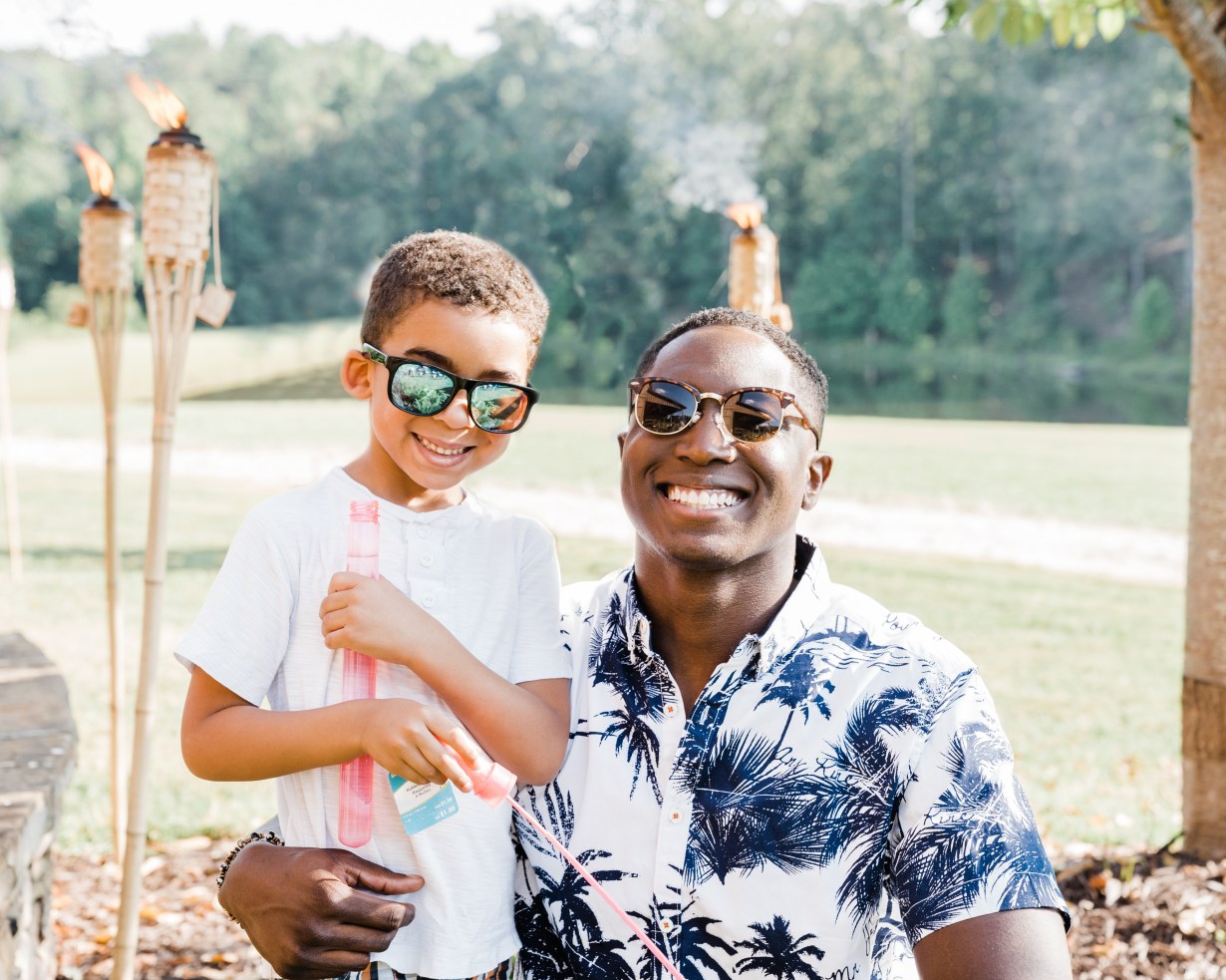 Due to their Polynesian origin, bamboo torches are also sometimes known as tiki torches.

While you can get bamboo torches individually, it’s much more common to find them in packs of several. If you’re curious why, just imagine an outdoor party with one bamboo torch. Sad, right?

Bamboo torches come in a variety of lengths. How you plan to use them will determine what size you need.

Traditional bamboo torches average around 5 feet tall, though this can vary. Other bamboo torches are much shorter, usually under 3 feet. These are ideal for use on urban patios or smaller garden areas where they can be pushed into planters or even clamped onto decks or other surfaces. The shortest bamboo torches, typically 1 to 2 feet tall, include their own stand and are typically used for tabletop lighting.

In general, there are four types of “fuel” used in these torches, providing you with a variety of options.

Paraffin or kerosene: Petroleum-based fuels are among the cheapest and most common options. However, they can also produce more smoke and soot than other types of fuel.

Citronella oil: A more eco-friendly option, citronella oil in a non-petroleum base is the go-to fuel if you want to light your outdoor area and keep the bugs away.

Natural gas/propane: While uncommon, there are some bamboo torches that use propane or natural gas.

Solar/battery: Some bamboo torches do away with oil altogether and use solar power and/or batteries to power LED lights with simulated flame effects.

Bamboo torches should arrive fully assembled or only require minimal assembly. Solar-powered bamboo torches might require a bit more work in terms of assembly or positioning so they can take full advantage of the sun to recharge.

While many bamboo torches have a traditional, woven bamboo appearance, others incorporate colors or even patterns. Some bamboo torches also have add-on elements, such as seashells, which can add a special tropical touch to your outdoor décor. 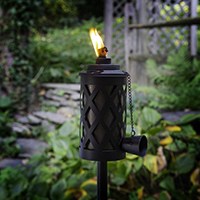 Did You Know?
For a more durable outdoor lighting option, consider using torches that are made of a more weather-resistant material like glass, resin, or metal.
Staff
BestReviews

No surprise here: bamboo is the primary material used in the construction of bamboo torches, from the outer shell to the poles to the laces used to hold the torches together. Although some torches use other materials, such as ABS plastic, it’s usually molded to look and feel like bamboo.

Fuel canister: Bamboo torches don’t include a lot of different parts, but the canister that stores the fuel is an important one. Plastic or metal are the primary materials used for these canisters, and you will almost always be better off choosing metal because it’s much less likely to crack or catch fire. Also, note that a larger canister size usually translates to a longer burn time.

Wick: If your bamboo torch burns fuel, it has a wick. These wicks are usually made of fiberglass, but you can also find torches with cotton wicks. Of the two, fiberglass lasts longer because cotton burns more quickly. You’ll need to adjust the wick as it burns so it produces a nice-size flame. You can easily replace wicks that get too short by ordering extras online or you can find them in the camping section of a big box store.

Snuffer cap: A snuffer cap placed over the burning torch provides an easy and safe way to extinguish the flame. Leave the cap off while the wick cools, then place it back on the wick to protect it from elements. While not all bamboo torches come with a cap, most high-quality torches include one. The cap is usually attached to the torch with a string or chain so it won’t get lost. 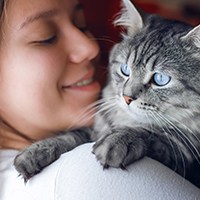 For Your Safety
If you have pets or young children, consider a safer lighting option, such as solar-powered LED torches.
Staff
BestReviews

Inexpensive: Bamboo torches in the $10 to $30 range tend to be shorter and less durable. These torches typically sell one to four torches to a pack and have small fuel canisters, usually under 12 ounces.

Mid-range: You can find more torches per pack, typically six to eight, in the $30 to $50 range. Fuel canisters average around 12 ounces. The bamboo is usually more durable than that found in cheaper torches: less liable to split and better able to withstand the weather.

Expensive: Bamboo torches that cost $50 to $70 or more usually include more torches per pack, often up to a dozen. These torches are the most durable and attractive. Fuel canisters of 16 ounces for a longer burn time are common here, as are synthetic bamboo and solar-powered torches. 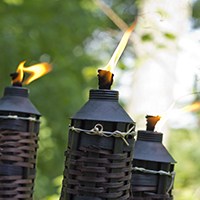 Did You Know?
In addition to helping to repel insects, torch oil made with citronella also tends to smoke less and produce less odor.
Staff
BestReviews 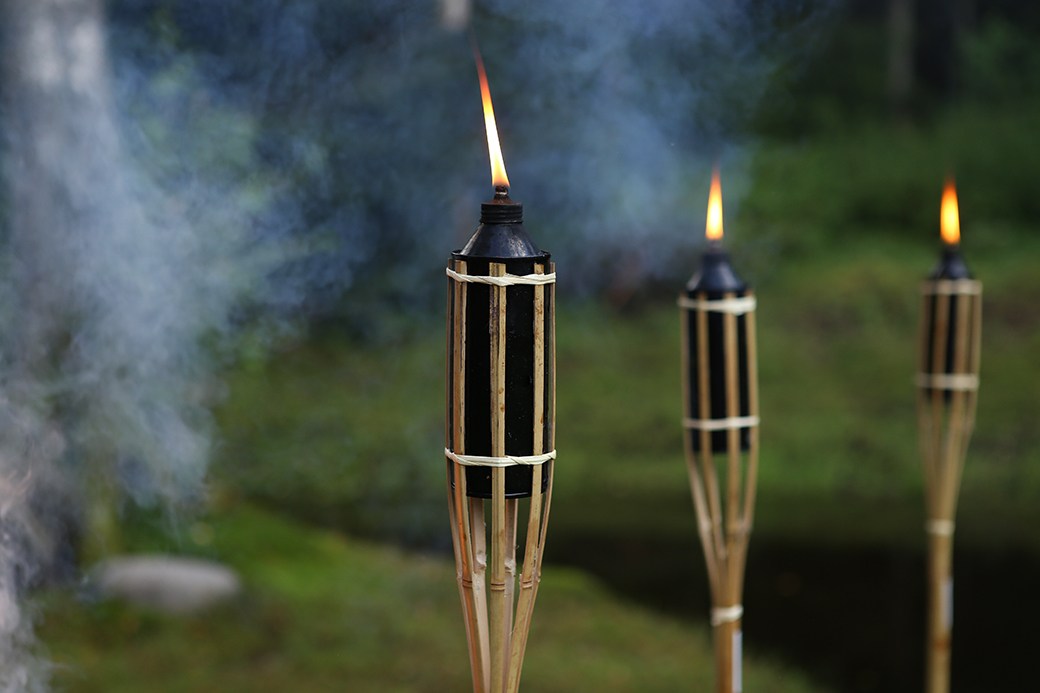 For safety purposes, be sure to position your bamboo torch at least 6 to 8 feet from flammable materials such as awnings, trees, and other bamboo torches.

Q. Do these torches really keep bugs away?

A. That depends on what you burn in the torches. If you’re using a petroleum-based fuel, such as paraffin or kerosene, you won’t be keeping insects at bay. If you’re using citronella, lemongrass, or a similar type of fuel, you’ll have considerably more luck in this area. Something like citronella, which is an essential oil that’s added to non-petroleum fuel, works by making it difficult for mosquitoes and other biting insects to find a host (you). Note that citronella oil is more expensive than petroleum-based torch fuel.

Q. What’s the easiest way to fill a bamboo torch?

A. Torches that burn petroleum-based or other fuel need to be filled often. The easiest way to do this is with a medium-size funnel, which can help to keep oil in the canister and not dripping down the bamboo casing, which is a fire hazard. Don’t fill the canister all the way to the top: two-thirds full is recommended. Any more and you run the risk of spilling oil when you insert the wick or creating a top-heavy torch that can tip over. Also, be sure that the cap/wick is securely in place before lighting the torch. Finally, be sure that you only use the type of fuel recommended by your torch’s manufacturer. This should be explicitly stated on the documentation included with your torch.

Q. How long will a bamboo torch burn?

A. The length of time that a bamboo torch will burn depends on a couple of factors: the size of the oil canister and the length of the wick (more wick produces more light but also goes through fuel faster). One way to easily extend the burn life of a torch is to shorten the wick. As a rough rule of thumb, a 12-ounce fuel canister contains enough fuel to burn for 8 to 10 hours. 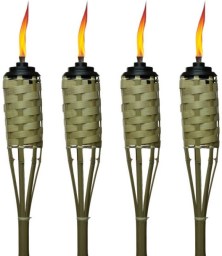 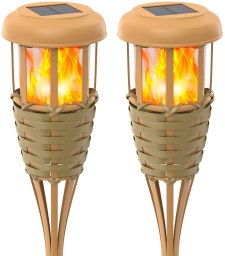 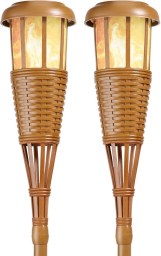 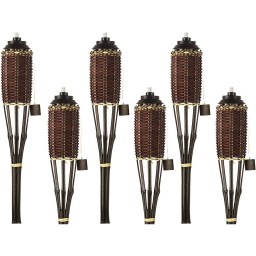 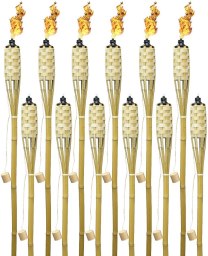