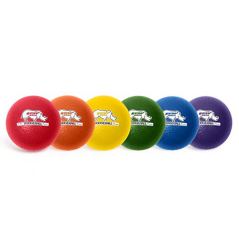 These dodgeballs take the sting out of the game and put kids and adults on equal footing.

Don't hurt even when thrown hard. For use indoors and outdoors. Coated with patented Rhino Skin so they're rip-resistant for rough play. Low-density core prevents big bounces so the ball stays in the game area. Comes in a variety of colors and sizes. Won't sting like classic rubber balls. Easier for younger children to catch and throw. Set of six. 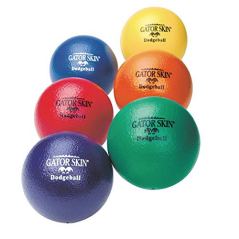 Dramatically lighter than playground balls, these kid-friendly balls are loved by children and adults alike.

Tactile, making them good for gripping. Non-sting coating. These kid-friendly balls are dramatically lighter than playground balls and eliminate sting from getting hit. Latex free. Set of six 6-inch balls. 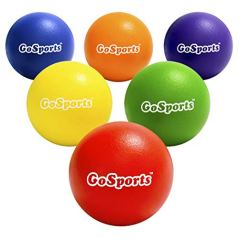 These foam balls come in your choice of sizes, for youth or adult use.

Durable. Hold up well to abuse. Rebounds back to size when squished. Foam dodgeballs great for the gym, backyard, or camp. No-sting surface. Latex-free; made of durable rubber that holds up to extended use by kids and adults. Heavy duty mesh carry bag. Your choice of 6-inches (youth) or adult (7 inches). Set of six.

Some find the surface to be slippery for gripping. 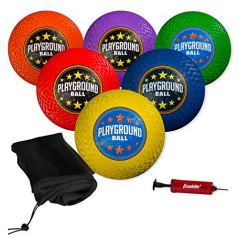 Just like the old-school rubber balls you used for dodgeball back in gym class, only now in better colors.

Includes six 8.5-inch rubber playground balls in a variety of bright colors. You also get one 6-inch pump. More weight and bounce than foam dodgeballs. Balls are shipped deflated. Can be used for other games, too.

These will sting more than foam dodgeballs, so consider who will be using them. 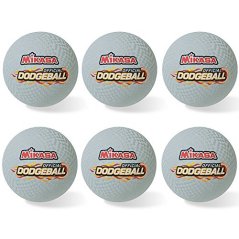 Regulation sized for adult leagues, but just as good for team-building, work retreats, and other grown-up games.

Not sting-free. Do not leave out in the sun.

Dodgeball sets include balls designed to be throwable, catchable, and dodgeable. Whether you are looking for a set to be used by kids, adults, or a mixed group, there are several dodgeball sets to choose from.

One of the first considerations is the material and size of the balls. Classic rubber balls are larger and come with some sting, so they are better suited to adults or older children. Foam balls don’t sting as much and are much easier to grip with smaller hands. Fabric-covered balls have the size and weight of rubber balls but much less sting.

Most dodgeball sets include six balls, but the number may vary as there is no standardized dodgeball ruleset. Finding the right dodgeball set means choosing the one that fits your group and will be the most fun.

If you’re ready to pick out a dodgeball set, take a look at our top recommendations. To learn more about the varieties of dodgeball sets available, continue reading. 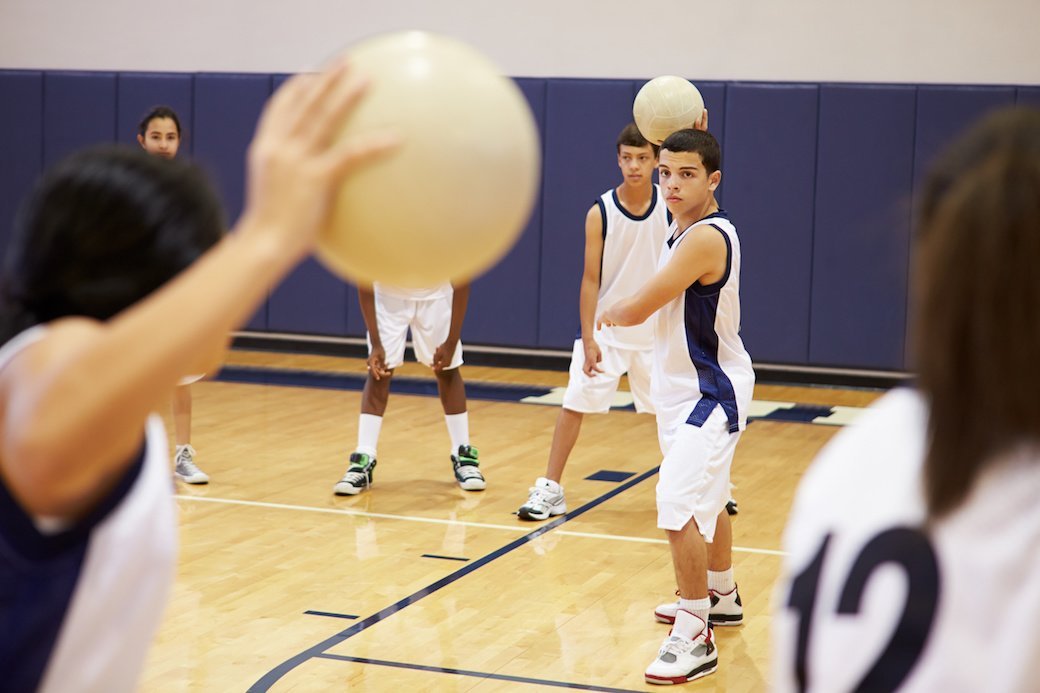 If you are purchasing dodgeballs to use with a league, check with your league first to make sure you are ordering the proper size balls.

Though there are organizations that list “official” dodgeball rules, there’s no agreed-upon ruleset. As a result, dodgeballs vary in size, weight, and material, which leads to a wide array of dodgeball sets to choose from.

Keeping players safe is the most important part of enjoying dodgeball. If you have a mixed group of children and adults, the dodgeballs should be small enough for everyone to grip and soft enough that younger players aren’t hurt by them.

Dodgeballs come in a few different materials, each of which have their own weight and feel. You should choose a material based on the age of the players.

Rubber balls are the classic choice. Also known as “playground balls” or “kickballs,” these are the classic colorful rubber balls with a grippy texture and a decent weight to them. Their larger size, typically 8” to 8.5” in diameter, makes them difficult to grip for small hands, but easier to catch. Rubber balls tend to bounce quite a bit, which keeps them moving from one side of the court to the other. The extra weight can make them difficult to throw quickly, but when they get up to a good speed, they can sting your target. As a result, these are best suited for adults or older children.

Foam balls work well for younger children since they are lightweight and unlikely to sting. Their diameter can range from 3.5 to 8.5 inches. The smaller the ball is, the easier it is to throw quickly, and the harder it is to catch. Foam balls are generally lighter than rubber balls. While some may be made entirely of foam, the best quality foam balls are coated in polyurethane or a similar rubber coating, which is generally latex-free. Adults may enjoy using foam balls as well.

Cloth balls are usually rubber balls with a cloth covering to reduce sting. They have a similar weight and size to non-cloth-covered rubber balls. These can work well for a mixed group of children and adults, but they can be difficult for children to throw.

Most dodgeball sets come with six balls of equal size. However, some may include more or fewer.

Sets with four balls are best suited for groups with teams of four or fewer.

Sets with six balls will generally work for groups with teams of four to eight players.

In general, there should be one ball for every two players.

Some sets may come with a fabric or net carrying bag. As it’s fairly difficult to carry six dodgeballs without a bag, a good carrying bag may help you choose between two similar sets. Most bags come with a drawstring, and the best bags will have some sort of fabric handle or strap.

In the case of rubber dodgeball sets, the inclusion of a pump and needles can be very handy, especially if you find yourself with a deflated ball during a game.

Many dodgeball sets come in all one color — often pink or red. However, some sets offer balls in different colors. Not only is this a bit more fun, but it can also help you quickly spot when a ball has gone missing since you can look for missing colors.

Dodgeball sets for $15 to $25 typically include foam balls which may or may not have a rubber coating, though a few rubber sets can be found in this range. The rubber coatings themselves tend to be thinner and prone to tearing in this price range. Sets include from four to six balls.

Sets for $25 to $40 use higher quality materials than cheaper sets, with durable rubber coatings for foam balls and sturdy playground-style rubber balls. Sets in this range may include accessories like pumps and carrying bags.

In the $40 to $60 range are highly durable dodgeballs, often in sets of six or more. For dodgeballs that will last for years, it’s usually worth the extra cost and can be less expensive in the long run. ​​​​​​​

Did you know?
While rubber balls that come with an air pump are great, an air compressor can often work far faster.
STAFF
BestReviews 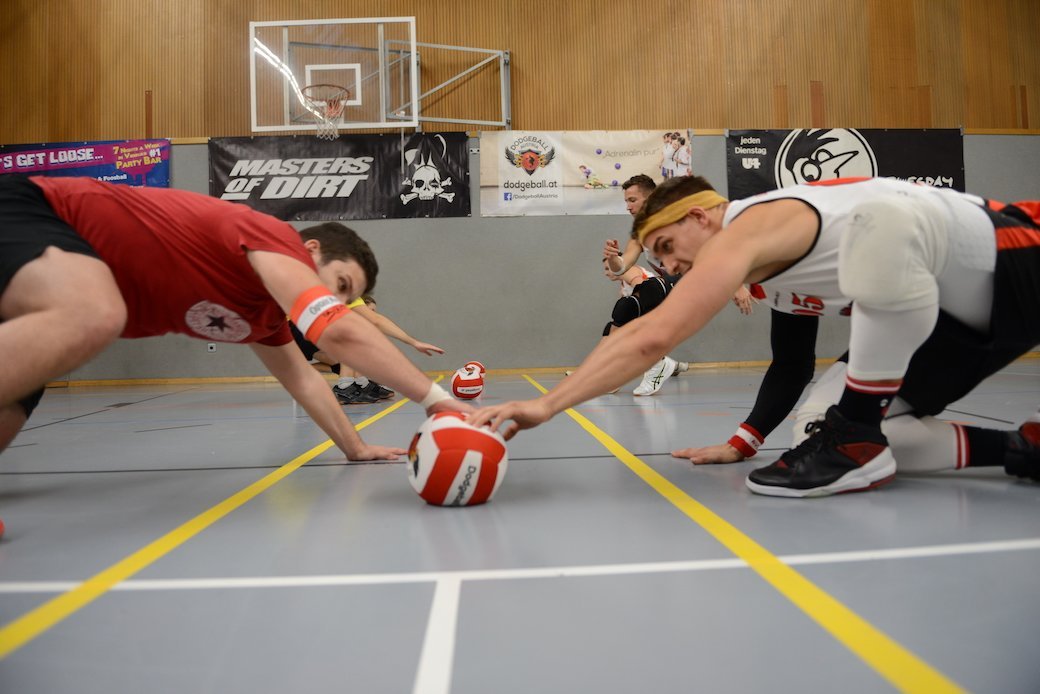 While most dodgeball teams have six people to a team, you can play with teams ranging from 2 to 12 or more if you have the space.

Q. Is dodgeball a safe game?
A.
Any game or sport comes with risk of injury. However, dodgeball is fairly safe since the two teams stay mostly separate. As a result, no protective gear is necessary, though the the occasional skinned knee or bumped head is possible.

Q. Can dodgeball be played outdoors?
A. Though it’s mostly an indoor game, it can be played outdoors. Without a fence surrounding your play area, you may find yourselves running after out-of-bounds balls frequently. ​​​​​​​ 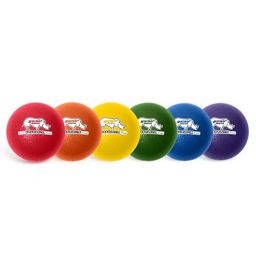 Best of the Best
Champion Sports
Rhino Skin Low Bounce Dodgeball Sets
Bottom Line
These dodgeballs take the sting out of the game and put kids and adults on equal footing.
Shop Now 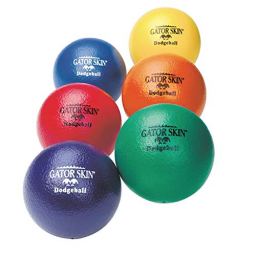 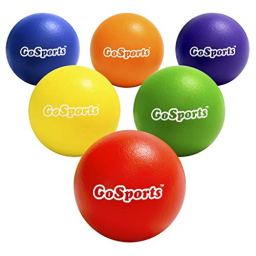 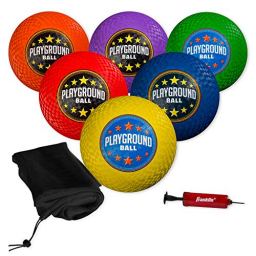 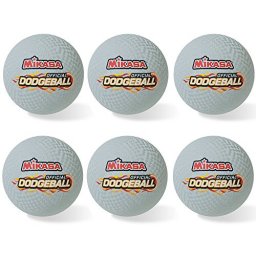