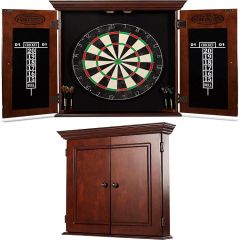 A self-healing bristle dartboard with a premium cabinet design.

This 18-inch dartboard features a self-healing backboard and cabinet made from high-quality engineered wood, offering tournament-level play for various dart games. It has a removable steel scoring ring and comes with 6 steel-tip darts.

The plastic shaft of the darts is fragile. 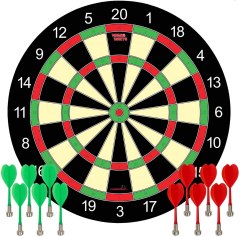 Magnetic darts give parents and babysitters a safer way for kids to play without the need for supervision.

The 14.5-inch design is slightly smaller than standard models, which some may find off-putting. 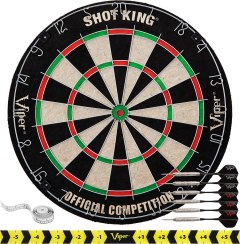 A good, medium-priced choice from a reputable company. It's durable and good for professional or recreational players.

An 18-inch unit built from a self-repairing sisal fiber that's regulation size and beginner friendly. Staple-free bull's-eye gives users greater chance of achieving that perfect throw, and the thin wiring diminishes the chances of an unlucky bounce or deflection.

Some reports that the divider grill may start protruding through the sisal, and repair is difficult. 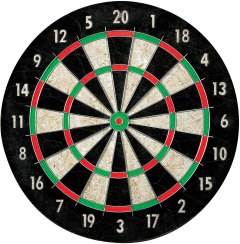 Simple option built from quality materials that heal after you're done and give young and old dart players years of fun.

Sturdy bristle model built with self-healing sisal for a longer life, even with prolonged use. Franklin has a reputation for quality sporting goods, and this affordable professional choice is no exception. Great for beginners and designed for seasoned veterans to enjoy, as well. Easy-to-spot checkers.

Metal dividers are thicker and more prominent, leading to many more bounce-outs. 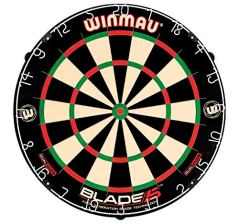 Sturdy construction and good design make this a great option for professionals or casual players.

Professional sisal fiber design that's endorsed by the British Darts Association. Includes sharp and durable darts, wide scoring areas, and thin wiring to get the most of the board surface without bouncing out or deflecting. Uses an easy-to-use leveling system that makes it work anywhere.

A few users have reported that the sisal surface isn't quite even.

Darts is a game that nearly everyone is OK at playing. But we all have that one friend who dazzles with impressive throwing skills. That's because he or she owns a dartboard. But before you run out to get your own dartboard, there are a few things you need to know.

Although bristle dartboards are self-healing and the most durable type, if you have children, a plastic dartboard is the way to go. The novice player will want some sort of backing to keep the holes in his or her surrounding wall to a minimum. When choosing darts, quality two-piece construction is the way to go. 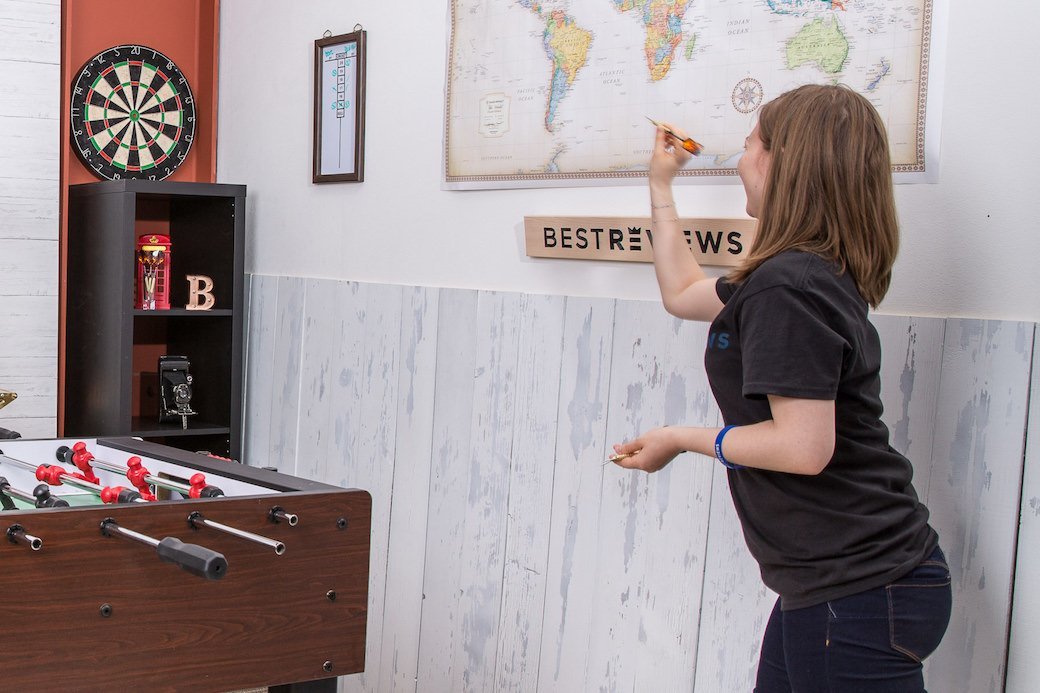 The standard dartboard layout we use today was invented by English carpenter Brian Gamlin in 1896. He died before he could patent it.

Rings: In the center of the dartboard are two small rings called the bull’s-eye (or bull): the outer bull’s-eye (green) is worth 25 points. The inner bull’s-eye (red) is worth 50 points, and for the purposes of many games is considered a double-25.

The ring halfway between the bull and the edge includes the trebles. These score three times whatever the number of that section is. So treble-20 scores 60 points from a single dart.

The outer ring has the doubles, two times the score.

Spider: A wire frame, called the spider, divides the colored sections. This removes any doubt as to what part of the dartboard a dart has landed in. In budget dartboards, the wires are round in cross section, fairly substantial, and held in place with steel staples. When a dart hits a wire or staple, it invariably bounces out, scoring nothing.

Thinner wires are better and denote a higher-quality board. The best have no staples to get in the way and thin wires that are triangular in cross section. They are designed to guide the dart into the board rather than away from it. Triangular wires don't eradicate the problem entirely, but they do drastically reduce it.

Backing: Most of us aren't as accurate with our darts as we'd like to be. Beginners often miss the board completely, particularly when trying for a double. Protective backing is available to save your wall from looking like it has been subject to a firing squad. You can also buy a decorative cabinet that conceals your board when not in use and includes a chalkboard where you can keep score during games.

Quality: Just because a dartboard manufacturer calls their dartboard "competition" or "tournament" doesn't make it so. Anybody can use the words to describe a certain size or configuration without the board actually being of a recognized standard. If you need a board for competitive play, check carefully and buy one endorsed by one of the sport's governing or regulatory authorities.

Did you know?
The World Darts Federation (WDF) is the governing body for darts. It recognizes two world championships, which are run by the British Darts Organisation (BDO) and the Professional Darts Corporation (PDC).
STAFF
BestReviews

A dart is composed of four parts: tip (point), barrel (the part you hold), shaft (stem), and flight.

One-piece darts: On the cheapest darts, the shaft and flight are one molded piece of thick plastic. They're easily damaged and aerodynamically poor, which can lead to disappointing game play. We advise against them.

Two-piece darts: Darts with separate shaft and flight are much better. Budget darts have brass barrels. Professional models have tungsten barrels. Tungsten is heavier, so darts can be slimmer and thrown closer together. That's important when you're trying to get three darts in the treble-20, for example.

Tips: Dart tips are either soft (plastic) or hard (steel). Soft-tip darts are a more recent introduction and designed to be safer. There's nothing wrong with them, but the feel isn't quite like "proper" darts. Enthusiasts and professionals choose steel-tipped darts.

Compressed paper dartboards can be found for as little as $10 and might include cheap darts, too. However, you can find many reasonable bristle boards available for $20 to $30.

Plastic dartboards can cost anywhere from $40 to $100. You might want to buy one for the safety aspect, but it won't save you money.

You could pay $60 to $100 for a top dartboard, and you'd be playing on the same kind of surface the professionals use. In this scenario, you wouldn’t be worried about the potential flaws in the equipment, and you'd be able to focus 100% on your performance.

There are lots of different dart games to test your skill. One of the most popular for those new to the sport is 301, usually played by two players or two pairs (doubles). Each player throws three darts, then their opponent throws three, and so on until the game finishes.

If, for example, after a few throws you only have 14 left, you need to hit the double-7 to win. If you hit the double-19 (right next to it), you "bust" and have to wait another turn to try double-7 again. Not so simple, is it? 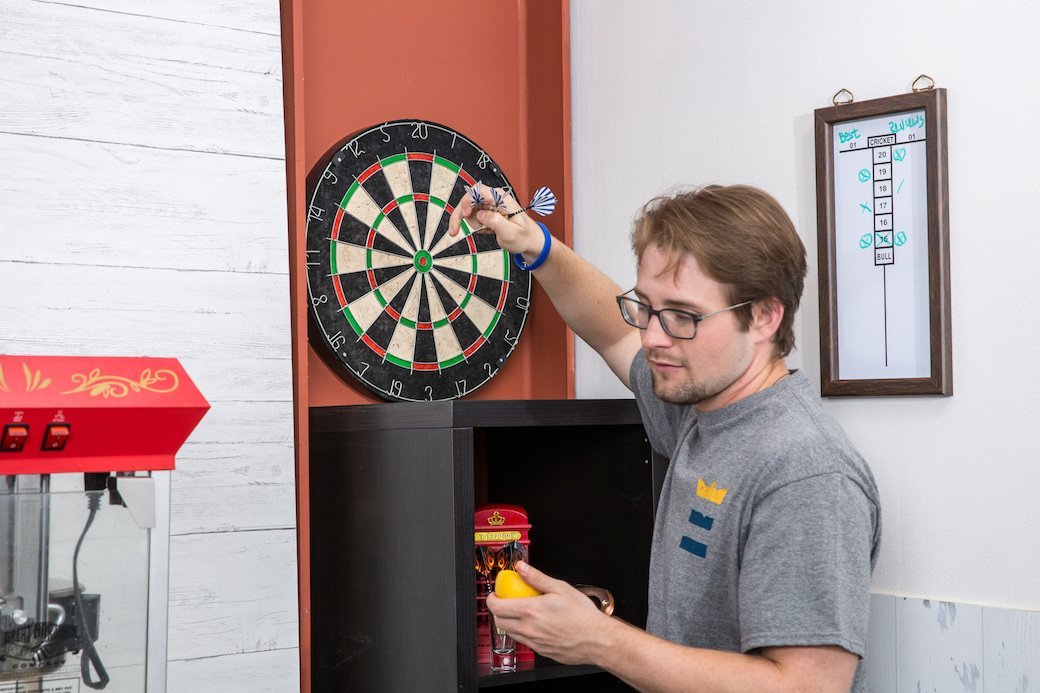 Think darts is just a fun game? It can be, of course, but the sport's top professionals earn around $1 million a year.

Q. What is the regulation distance from the board to where you stand?

A. It's 7 feet 9 1/4 inches from the front surface of the dartboard. The line is called the “oche” (pronounced like “hockey” without the h). The most convenient way to mark it is with sticky tape. If you want to look a bit more professional, roll-up rubber mats are available (they also help protect your floor from darts that bounce out). In competition, a raised platform is used so players don't accidentally sneak forward.

Q. Are the dartboard colors important?

A. Although almost all dartboards follow the same pattern of black, white, red, and green, there is no official rule saying they have to be those colors, only that the 20 must be at the top and darker than the areas on either side.

What's important from a playing point of view is clarity. On some boards, the white areas can seem a bit dull, which makes it harder to concentrate on your target. We recommend boards where the divisions are nice and clear.

Q. Some dartboards have painted numbers and some have wire. Is there a difference?

A. The idea behind the wire numbers is to spread the wear so the dartboard lasts longer. The treble-20 is the highest score on the board, so naturally it's targeted most often. Even with self-healing bristles, a board will wear out eventually (it tends to swell as fibers become dislodged). The treble-13, by contrast, is one of the least-used areas. When the board starts to show wear, you can rotate the metal ring with the numbers on it, moving the 20 to where the 13 was and giving your dartboard a new lease on life. This process can be repeated – commonly with the 2 and 7 – so a wire-numbered board might last four times as long as a painted version. 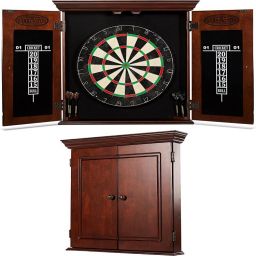 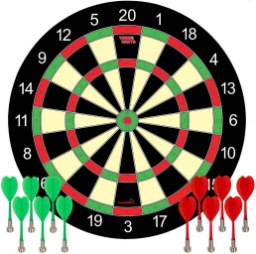 Best Bang for the Buck
Funsparks
Magnetic Dartboard
Bottom Line
Magnetic darts give parents and babysitters a safer way for kids to play without the need for supervision.
Shop Now 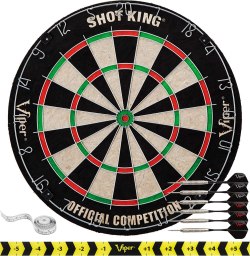 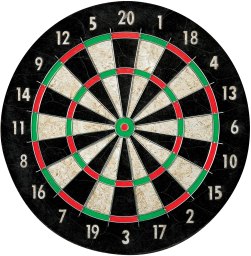 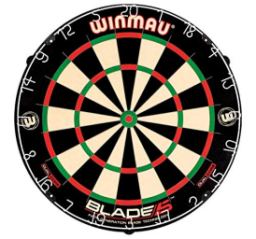 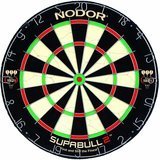 Top Pick
Nodor
SupaBull2 Bristle Dartboard
Bottom Line
A midrange model best suited for beginners who want to learn to play without spending a lot of money for a professional setup.
Shop Now 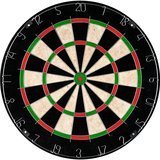 Top Pick
Hey! Play!
TG Champion Tournament Bristle Dartboard
Bottom Line
For the money, the TG Champion is a great buy. It's quiet, durable, and the darts can be removed easily. It's a good, all-around dartboard.
Shop Now 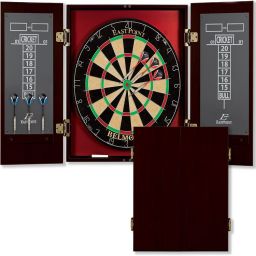 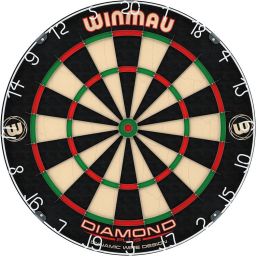 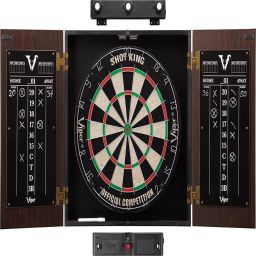