A large, well-built tent that even a novice camper will feel comfortable setting up and taking down.

Goes up and comes down quickly and easily. Fits 2 queen air mattresses. Good ventilation keeps tent from getting stuffy. Large bag is easy to fit the tent back into. Double door for convenience. Electrical cord access port.

Too large and heavy to be used for backpacking trips.

Separate doorways for each room. Fiberglass poles and steel uprights provide strength and stability. Fits up to eight campers.

Some buyers experienced durability issues, but they seem to be in the minority. 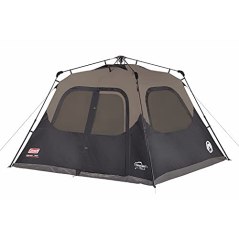 Pre-set collapsible tent poles make setup fast and easy in less than 90 seconds, even for one person. Breakdown is also a breeze. Tent stays sturdy in heavy winds. 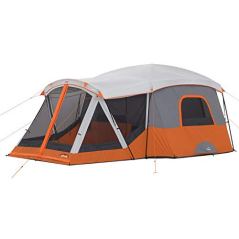 H2O block will keep you dry whatever the weather. Pockets and hooks give you space to store items off the floor. Center height of over 7 feet. 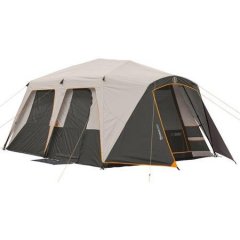 Windows only zip down the sides and can leak a little.

Camping is a great way to vacation on a budget and spend some time communing with nature, but it doesn't need to be a bare bones experience. Cabin tents tend to be fairly luxurious with plenty of room for the whole family.

What sets them apart from other tents is the tall roof height, allowing you to stand up straight while inside. Cabin tents are perfect for anyone who usually finds tents somewhat cramped or who wants to be able to more easily spend time inside the tent, even setting up a dining area or sleeping on tall airbeds.

One of the primary factors to consider when choosing a cabin tent is how many people fit inside and how many rooms there are. How you set up the tent and what type of storage space it has for all your gear is also important.

If you want to know more about cabin tents, read on for our full guide. When you’re ready to buy, check out our top picks. 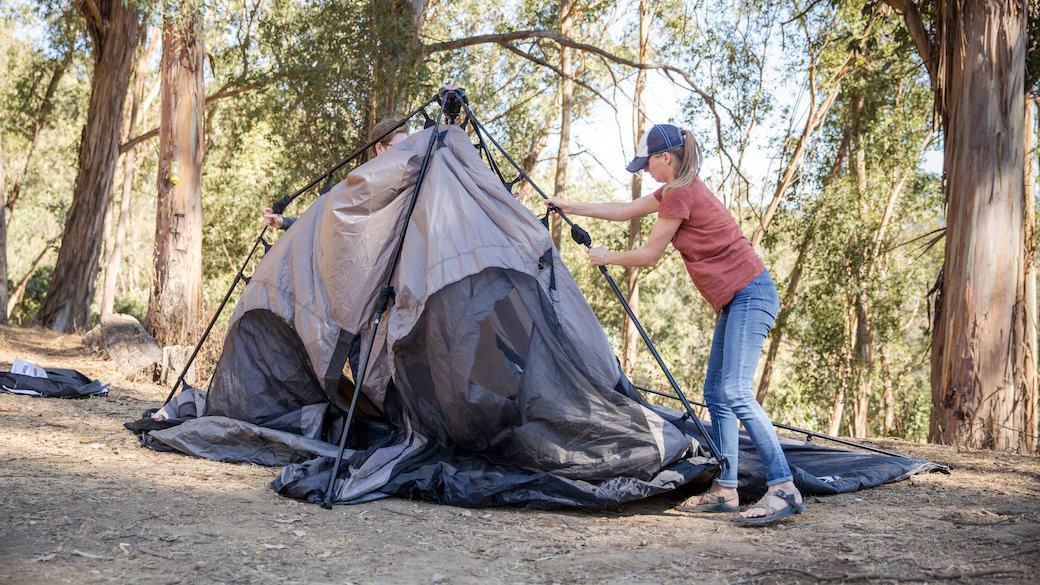 Cabin tents are generally quite bulky and heavy, so they're best for use at campgrounds where you can park your car near your pitch.

The "berth" of a cabin tent is the amount of people that can fit inside. So you might call a tent that can sleep six a "six-berth tent" or a "six-person tent." However, you must remember that the berth listed is the absolute maximum amount of people it can sleep. If six people sleep in a six-person tent, for example, they'll be packed in closely with just a few inches in between. If you'd like to have a little more room, choose a tent that sleeps a couple more people than you actually need to fit in it (for example, a six-person tent would do nicely for a family of four). If you'd like to sleep on air mattresses, you'll need a tent with a berth of at least double the amount of campers, so a family of four would need an eight- or nine-person cabin tent.

Do you want a tent with just one large room inside, or would you prefer one with separate sleeping areas? Separate rooms are great for giving kids and parents a bit of privacy, which is especially nice for older children and teens. Some large cabin tents have three rooms, which lets you either use all three for sleeping or keep the central room as a living area/dining room for eating or hanging out in if the weather isn't great.

Also consider whether your chosen cabin tent has a front vestibule (an area that's covered by the flysheet but isn't part of the inner tent). A vestibule can be useful for storing gear or even for sitting in.

Did you know?
A rainfly is an additional flysheet that fits over the top of your cabin tent to offer extra protection from rain. It’s ideal if you camp during the wetter months or live somewhere with unpredictable summers.
STAFF
BestReviews

The hydrostatic head is a measurement, given in millimeters, that denotes how much water can fall on a tent before it starts to leak through. Anything above 1,500 millimeters is classed as waterproof, but we'd recommend buying a tent with a hydrostatic head of 3,000 millimeters or above — even higher if you camp during the winter or will be camping in areas that get lots of rainfall.

Check how much, if any, dedicated storage your chosen cabin tent has. Some basic tents have little to no storage space, so you'll need to store your gear on the floor of the tent, which takes up precious sleeping space. Some cabin tents have built-in storage pockets for holding small items and some have gear lofts for bags and larger items.

You can find cabin tents that feature an awning or canopies that you can set up at the front of the tent to provide shade or shelter when you're sitting around the campground or cooking outside your tent.

A quality cabin tent should provide plenty of ventilation, especially if you'll be camping in the warmer months. Ventilation may be provided by side vents, mesh windows, or other mesh areas.

Inexpensive: Basic cabin tents start at around $100 to $200. These tend to be on the smaller side, usually with a six- to nine-person berth, and more basic overall, with a standard setup, fiberglass poles, and little in the way of extra features.

Mid-range: For $200 to $400, you can find cabin tents that are large but fairly basic. Or some may be more compact with high-end features, such as preassembled frames, gear lofts, or generally rugged construction.

Expensive: High-end cabin tents are priced at roughly $400 to $600. These tend to be extremely large tents capable of sleeping 14 or more people, inflatable tents, or those that are extra durable with a range of excellent features. 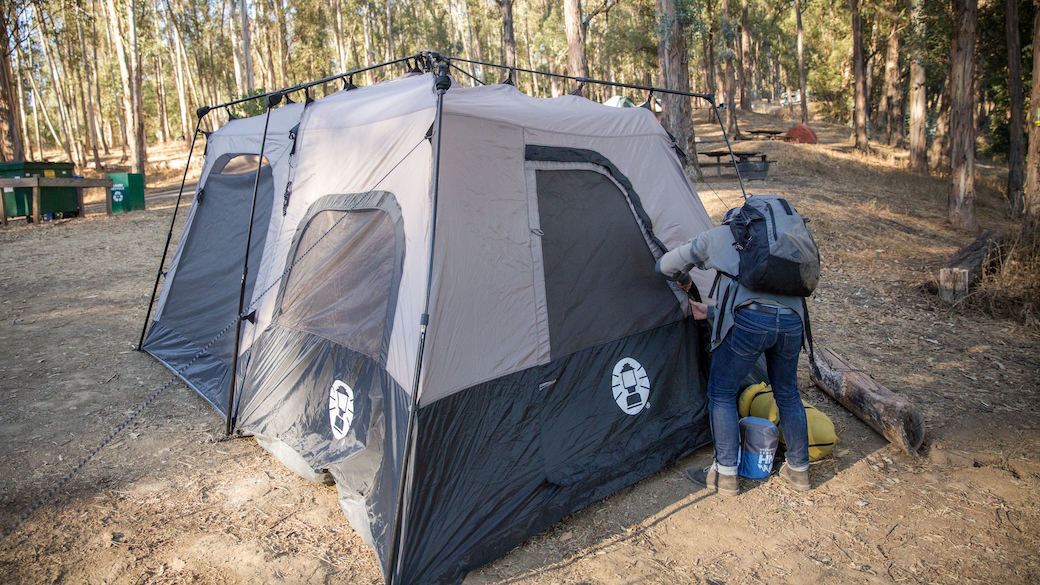 Cabin tents generally rely on guy lines and stakes to retain the shape of their near-vertical walls and are, therefore, hard to move even a little once set up — so choose your camping spot carefully.

Q. Can you find cabin tents suitable for all-season use?

A. The majority of cabin tents are "three-season" tents, which are designed for use in moderate conditions, such as those found in most areas between spring and fall. Although they can withstand some rain, the focus is on breathability and ventilation for use in warmer weather. However, you can also find some four-season cabin tents designed to withstand heavy rain, high winds, and even snowfall.

Q. Will I be able to set up a cabin tent alone?

A. Due to their large size, cabin tents are more challenging to set up solo than smaller tents are. As such, it will be far easier to set up your cabin tent with at least one other person to help you. If you'll definitely be the only person capable of setting up your cabin tent, choose a pop-up, inflatable, or instant-pitch model.

Q. What kinds of accessories will make my camping experience more comfortable?

A. Camping isn't always a comfortable experience, but bringing the right extras can help you get a good night's sleep. We'd highly recommend bringing an airbed or cot to sleep on or, at the very least, a camping mat. Sleeping on the floor is never comfy. Also, choose a sleeping bag of the correct weight for the season, so you won't get too hot or too cold. Don't forget to bring a pillow, either, whether standard or inflatable.

Best of the Best
CORE
9-Person Instant Cabin Tent
Bottom Line
A large, well-built tent that even a novice camper will feel comfortable setting up and taking down.
Shop Now 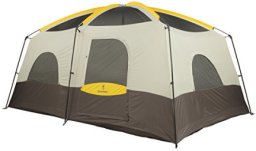 Best Bang for the Buck
Browning Camping
3-Room Cabin Tent (10-Person)
Bottom Line
With its optional center divider, you can configure this tent as one large room or two separate rooms, making it perfect for family camping.
Shop Now 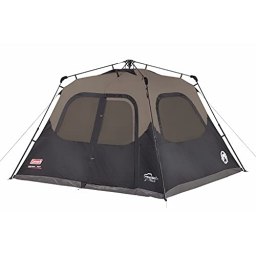 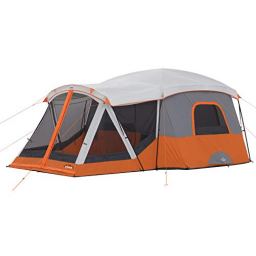 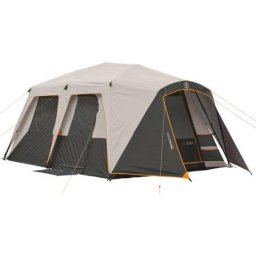