A straightforward climbing rope that makes for the best cord for a variety of activities.

Unique construction of the rope makes it smaller in diameter than other options. Very strong and durable. Rope is easy to work with in a number of climbing activities. Available in several colors. 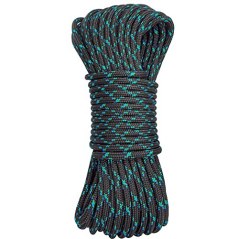 One of the best budget climbing ropes for longer life and durability after repeated use.

The rope is heavier than other options. Prone to fraying if not cared for. 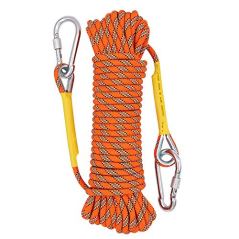 A good climbing rope for people looking for a safe and flexible option at an affordable price.

Different lengths of rope fit different uses and climbing activities. Outer skin of the rope offers a lot of friction for better grip and braking performance during dangerous activities. Made of 13 whole core rope.

Rope can bind and twist along the D ring due to the tight weave. 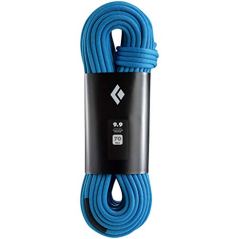 A fantastic choice for beginners and indoor climbers, this dynamic rope has great handling and catch.

Overall rope quality is great for the price tag. Uses 2X2 weave construction for a healthy balance of durability and handling. Not too stiff, not too soft. Available from 35m to 70m.

Rope is not dry-treated, which cuts down on its all-weather performance. 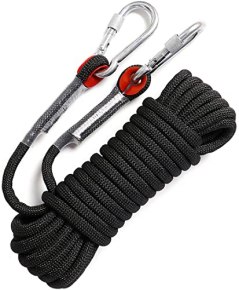 A super strong static rope that still manages to be lightweight.

A very durable high-strength polyester rope with a multi-core structure. Great for rappelling but has fantastic emergency and engineering use. Plastic protection rings ensure that your rope doesn't unravel on the ends.

The carabiners aren't great, so you may want to replace them.

Rock climbing is a sport that has slowly but steadily grown in popularity over the years. Once the province of lonely professionals and paid mountain guides, it has expanded to encompass a range of people from every walk of life. Today, it’s hard to find a major city that doesn’t have a gym or sports center with an indoor rock climbing wall.

Those gyms and sports centers have all the equipment you need for climbing. But what about when you decide to take it outdoors to the world of actual rock cliffs and walls? That’s when you need to start buying your own climbing ropes.

But if you’re just getting started, it can be daunting. There are many new terms to familiarize yourself with as well as different types of ropes for different functions. You’re going to need some guidance until you know your way around. Even an experienced athlete might need some help choosing the right rope out of the avalanche of possibilities. 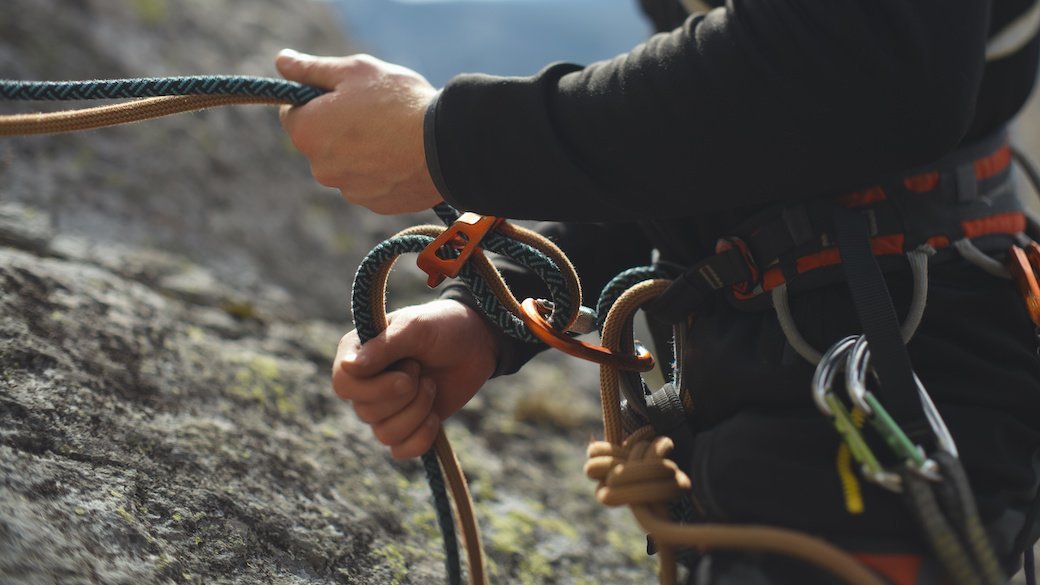 All climbing ropes must meet standards set by the Union Internationale des Associations d'Alpinisme (UIAA). You can visit their website to read the details on their standards and tests.

For rock climbing purposes, there are two main types of rope: static and dynamic. They are intended for different purposes, and using the wrong one could result in injuries. Finding the right rope for the right job is crucial to a safe and successful climb.

Static rope is defined as any rope that is not intended to stretch when it is put under a load. For instance, if you hang a 100-pound weight from a 10-foot length of static rope and then measure the length of the rope, it should not have stretched due to the weight. It should still be 10 feet long.

Static rope has many uses, including the following.

Dynamic rope is constructed so that it stretches when it is put under a load. If you fall while you’re rock climbing, a dynamic rope will stretch somewhat to slow your fall and absorb some of the energy so you aren’t injured by a sudden stop. Dynamic ropes typically elongate about 30% to 40% when a falling weight is put on them, meaning a 10-foot rope would stretch another three to four feet. In static situations, such as hanging a dead weight from a rope, dynamic ropes would stretch about 5% to 10% of their length.

Dynamic ropes are used for the following.

Finally, you need to decide how much rope is required for your climb. The longer the pitch (the climb), the longer the rope you will need for it. If you’re just doing some rock climbing on 30- and 40-foot cliffs, you can use shorter and less-expensive ropes. Taller cliffs or full-on mountaineering will almost certainly require much longer ropes.

"Most ropes have what’s called a middle mark in black dye to mark the exact center point of the rope."
STAFF
BestReviews

Material: Ropes are usually made of nylon or polyester. The weave will determine how much stretch the rope has.

Thickness: The normal range of thickness for climbing ropes is 8mm to 12mm. Thinner ropes are lighter and easier to tie knots in.

Color: If you have a variety of different ropes, color-coding them by type would be an excellent idea. That way, you won’t grab the wrong rope for the job at hand. Luckily, static and dynamic ropes both come in a wide variety of colors.

Weight: Obviously, 100 feet of rope is twice as heavy as 50 feet of the same rope, so the weight of the material will begin making itself felt as you get longer ropes or more of them. In addition to the material, the thickness is also a determining factor in the weight of ropes.

Eyelets: Built-in eyelets on the ends of the rope, sometimes called buttons or hooks, are high-strength plastic loops sewn into the rope to give you a place to attach your carabiners, also known as D-rings. Some eyelets are steel instead of plastic.

Moisture resistance: During normal use, ropes will be exposed to high humidity, rain, mist, dew, and ice. They need to have been treated to resist moisture and water. Ropes that dry rapidly are good, but the drying process tends to make them stiff until you work the rope to restore it. Ropes that have been treated to protect them against absorbing water are called dry-treated ropes. Dry-treated ropes are more expensive than untreated ropes, but the treatment extends the life of the rope and prevents dirt from being worked into the fibers. Dry-treated ropes also have less drag when they are sliding through D-rings.

Budget rock climbing ropes start around $14 for a 32-foot static rope, irrespective of color. A 100-foot length of inexpensive rope can run you around $55.

High-end static and dynamic ropes start around $30 for a 100-foot rope and go up as high as $500 or $600 for a 600-foot rope. These will be high-quality, dry-treated ropes that are thick and flexible.

Did you know?
The weight of dynamic ropes is often given in grams per meter.
STAFF
BestReviews

We like the Aoneky 10 mm Static Outdoor Rock Climbing Rope. This is a good beginner's rope. It will handle up to 2,000 pounds and is ideal for rappelling, camping, hiking, or to use as a secondary safety rope during rock climbing. It has one free end and one eyelet end and is available in a wide range of colors.

We also like the Mophorn Dynamic Nylon Climbing Rope. This 10.5mm thick, 164-foot primary climbing rope has enough stretch to cushion sudden loads in case you slip. It's not too stiff to knot, yet it’s not so soft that it abrades easily, either. This white rope with black banding is a high-strength rope for every occasion. 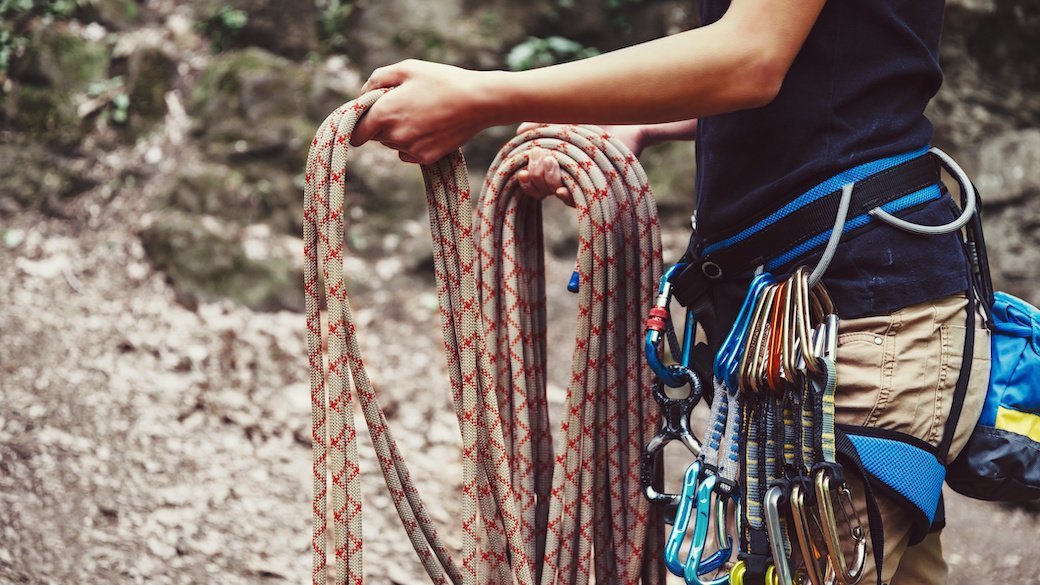 Static ropes for rescue work are often sold by the foot so you can get exactly the length you need.

Q. Why should ropes be cut on the ends?

A. This is where most of the stress occurs on ropes. The ends of a rope will begin showing signs of wear and tear long before the middle of the rope does. Cutting a few feet off each end can extend the useful life of the rope.

Q. What is a fall rating?

A. A fall rating is a standardized test where a heavy weight is attached to a predetermined length of rope and allowed to fall a set distance. The number of times the rope can survive this treatment before breaking is the fall rating.

A. No, though it does give a general idea of a rope’s strength and durability. Because the fall test is done rapidly in quick succession without giving the rope a chance to “recover” its elasticity, many experienced rock climbers believe the test should be revised or discontinued.

Best of the Best
Singing Rock
Rope
Bottom Line
A straightforward climbing rope that makes for the best cord for a variety of activities.
Shop Now 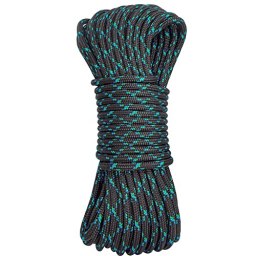 Best Bang for the Buck
GM Climbing
Cord Rope
Bottom Line
One of the best budget climbing ropes for longer life and durability after repeated use.
Shop Now 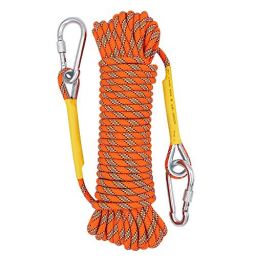 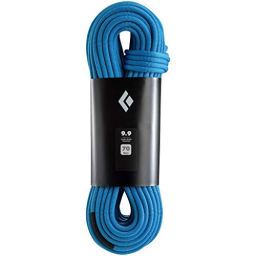 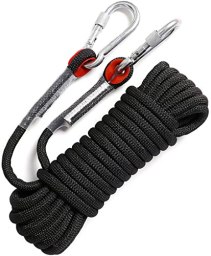