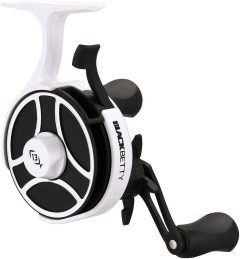 This high-quality ice fishing reel is well-constructed and feature-packed.

A couple of customers noted that the space between the spool and the inside of the spool causes knots and tangles when line spins. 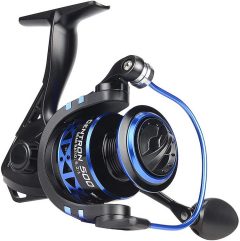 This model is high in quality yet low in price.

A couple of customers noted issues with braid. 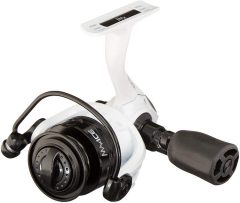 This light yet durable ice fishing reel is easy to manage and easy to transport.

Lightweight graphite ice fishing reel designed with 3 ball bearings and 1 roller bearing for simple use. Made with machined aluminum spool for strength and one-touch collapsible reel handle for easy carry. Designed for easy control of all types of fishing lines. Slow Oscillation feature allows for even line lay with any line type. 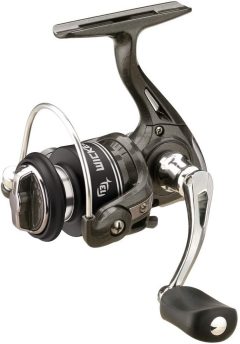 This model is a great choice for exceptionally cold days.

Lightweight ice fishing reel made with aluminum handle and aluminum spool. Spool designed with graphite body and rotor. Constructed with 5 stainless steel ball bearings. Comes with Instant Anti-Reverse feature. Designed with defrost lubricant for use in extreme temperatures. Can be used with or without gloves.

This product is only available in grey. 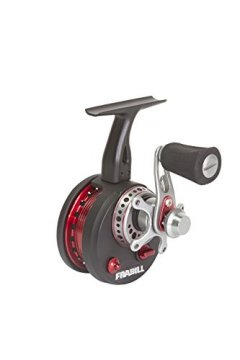 This premium straight line reel is constructed specifically with the challenges of ice fishing in mind.

Material made to not feel cold in low temperatures. Lubricated for sub-zero weather. Nice speed on the take-up. Drag is good. No worries about twist on your line. Includes an extra spool.

With a straight line reel like this one, it can be easy to let out too much line.

Ice fishing is popular in many places across the northern U.S., where keen anglers can enjoy their hobby all year long. It’s easy to get started, and quality ice fishing tackle is relatively affordable. Modern clothing and camping gear can allow you to stay warm and safe in all conditions, too.

If you already own a standard spinning reel, or even a fly-fishing reel, you could start out with that. However, like any sport, you’ll get the best performance and more enjoyment if you have the equipment designed for the specific activity at hand.

If you’re just starting out ice fishing, you have a huge amount of choice — there is something for just about every budget. Some of the gear will probably be familiar to you, but specialist ice fishing reels aren’t quite like other models, so it’s important to understand what you’re getting for your money. 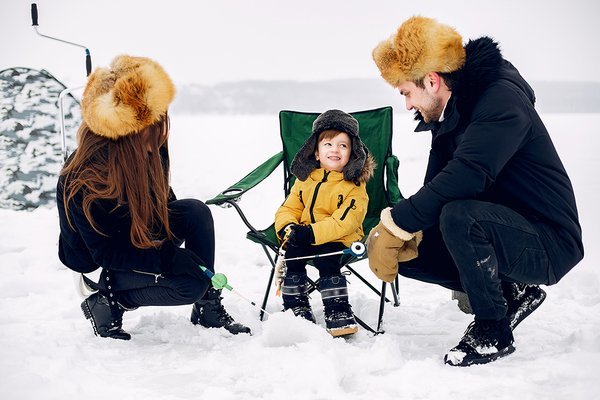 Fish aren’t generally disturbed by noise but being quiet shows respect for others who are fishing in your area. Stomping around creates vibrations that fish can feel through the water, and that will reduce your chance of catching something.

An ice fishing spinning reel is similar in concept to one you would use for freshwater or sea fishing, though it should be specifically designed to handle cold weather (which may include lubricant that doesn’t freeze at low temperatures). That’s not to say you can’t use it for warm weather fishing — they do have versatility on their side — but it should be primarily described as an ice fishing reel.

The ice fishing spinning reel does have a couple of minor disadvantages. A spinning reel is designed to cast your bait some distance, but obviously, you don’t do that with ice fishing. You simply drop your line through a hole in the ice. So instead of casting, you have to let the line out using the handle. It’s not a major problem, but it does slow down bait delivery. It also looks a little unnatural, as the bait twists in a corkscrew pattern as it descends. Lastly, spinning reels are more prone to icing up than inline reels.

Inline reels are a bit like fly fishing reels, and most can be set to free spool (or free fall). In other words, the winding mechanism is disengaged, and the line can unwind naturally with the weight of the bait. This makes bait delivery faster, which is particularly beneficial if you’re fishing at depth. Also, the line and reel are always inline, so retrieval is more direct.

On the downside, inline reels can be a little more difficult for beginners to set up initially, and they tend to be more expensive — though often better suited to harsh conditions and thus more durable.

The bottom line is, there are anglers who prefer an ice spinning reel for live bait because it will overcome the tendency to corkscrew, but inline reels are preferred for “jigging,” which is arguably the more popular ice fishing method. Occasional anglers who fish ice sometimes and “warm water” at others would likely be fine with an ice fishing spinning reel. Those who go ice fishing regularly and want dedicated tackle would probably prefer an inline reel. 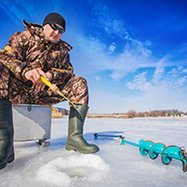 Did You Know?
You can cut an ice hole to whatever size you like, but 8 inches is popular. It doesn’t require a massive auger, and it’s plenty big enough for most fish you’ll catch.
Staff
BestReviews

Some inexpensive ice fishing reels may be aluminum, which doesn’t rust but can get unpleasantly cold. One solution is to use graphite (also called carbon fiber) or another composite (typically a fiberglass blend). These are strong, don’t freeze up so easily, and tend to be lighter than aluminum models. Notably, it’s common to find aluminum spools and carbon bodies.

How smoothly the reel runs is largely affected by the number of bearings in the mechanism. We suggest a minimum of four, but as a general rule, the more, the better.

Drag is like a clutch that adjusts the resistance of the line pull when you’re playing a fish. The more adjustability you have in the drag setting, the more versatile your reel. You can set low drag for small fish and increase it for larger prey.

It can be tedious to retrieve bait, especially if you’re fishing very deep. The gear ratio tells you how much line you’ll reel in with each turn of the handle. Older-style inline reels have 1:1 ratios that result in quite a slow retrieval. Modern versions can be 3:1 or better. That can give you more than 15 inches per turn, depending on spool size.

You’ll want to check the line capacity, which will vary depending on the weight of the line you use. (Heavier line is thicker, so you get less on the spool.) If you’re only fishing shallow waters, it won’t make a lot of difference, but it can impact you if you fish for big prey at depth.

Anti-reverse prevents the reel from winding backwards and thus reduces tangles. Automatic or instant versions can engage the drag if you’ve got a bite, helping set the hook if you’ve been distracted.

If you’re left-handed, check whether the ice fishing reel is ambidextrous. Many are, but it’s not guaranteed.

If you’re not sure what part of a lake to fish, check local knowledge at a bait store (and ask what the fish are biting). Alternatively, just go where the other anglers are. Most are friendly if you respect a reasonable space.

To get started ice fishing, you need a few more pieces of gear.

Ice auger: An auger is a vital piece of ice fishing equipment. While powered augers exist, a manual auger is lighter and less likely to spook the fish.

Ice fishing shelters: Protect yourself from the elements while you're out on the ice.

The cheapest ice fishing reels start around $25, though we think you’d often get better value for your money at around $35.

There’s a tremendous choice in both inline and spinning reels from $40 to $80, many offering great quality and high performance. We expect most ice anglers will find what they’re looking for within this bracket.

The very best ice fishing reels can top $100. They are superbly made, feature-packed models for the true ice fishing enthusiast. 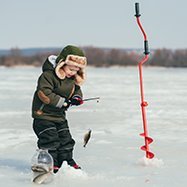 Did You Know?
When ice fishing, the breed you’re most likely to catch is pan fish — that’s any fish small enough to fit in your frying pan.
Staff
BestReviews 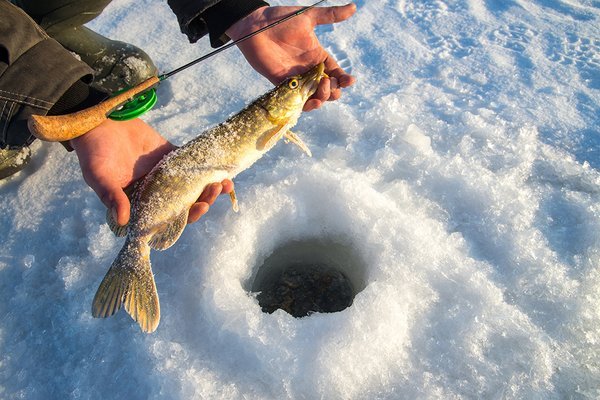 Live bait can be more challenging to use than lures, but many of the fish you’re hunting are predators, and their natural instinct is to attack live prey.

Q. Do I need a special line to go with my ice fishing reel?

A. If you’re serious about ice fishing and intend to go regularly, it’s certainly a good idea.  Ordinary braided lines and fluorocarbon can cope with the cold but will degrade quickly and become brittle. They’ll probably survive a couple of trips, but a specialist ice fishing line can handle freezing temperatures all season long.

Q. Are there restrictions on where I can go ice fishing?

A. Yes, and rules can be quite complicated. Local tackle and bait stores are a great source of information, but if you’re traveling any distance, it’s a good idea to check with the state authority before you set out, such as the Department for Natural Resources or the Department of Fish and Wildlife.

Q. How thick does ice need to be to support a vehicle?

A. At 8 inches thick, it’s generally considered safe for snowmobiles, as long as there are no flaws in the ice. Remember our warning about ice that makes noise. At a foot thick, ice can support trucks and 4x4s, but its thickness at the edge of a lake may be considerably greater than its thickness at the center of the lake. Never take that for granted. As with everything else related to ice fishing, there’s no substitute for local knowledge. 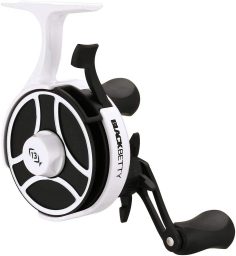 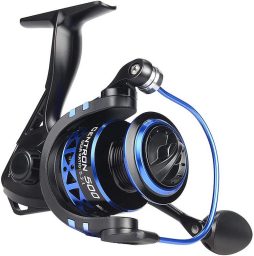 Best Bang for the Buck
KastKing
Summer and Centron
Bottom Line
This model is high in quality yet low in price.
Shop Now 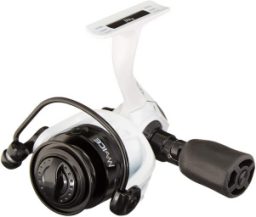 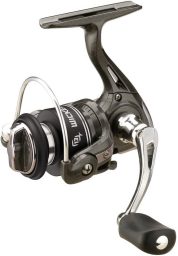 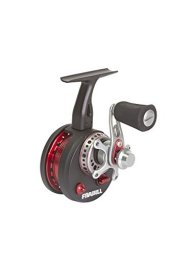 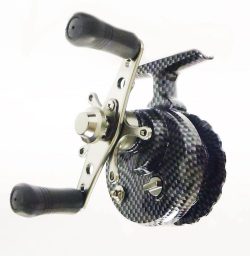 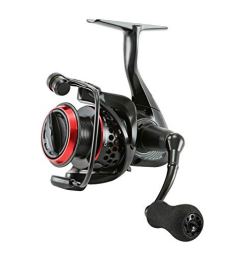 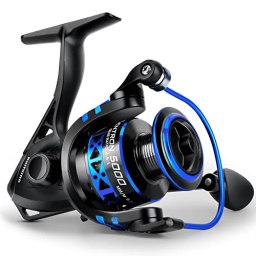 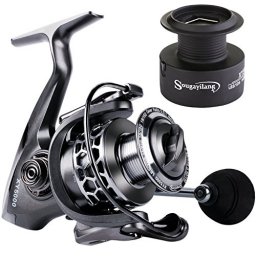 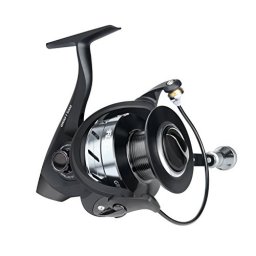