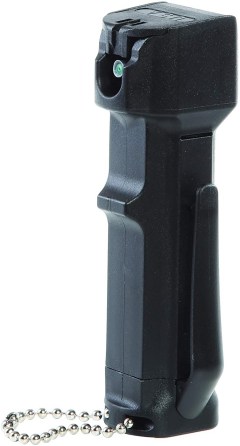 With features like UV dye, long-range, and a secure flip-top lid, this is a great pepper spray to keep with you wherever you go.

UV dye lingers so it’s easy to spot who’s been sprayed. Spray up to 20 times at a distance of up to 12 feet. A secure lid flips up to allow for spray to be used so no accidental pepper-spraying occurs.

Is most effective at distances of 5-8 feet as heavy winds can disperse it before reaching 12 feet. 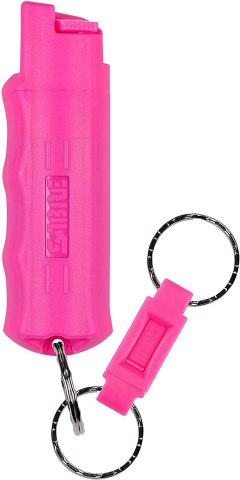 Portable with a strong, wind-resistant stream, this is a great 3-in-1 option for joggers, women, and delivery professionals.

Powerful, long-range spray up to 10 feet and high strength formula that's sure to stop people in their tracks. Contains all 3 popular forms of pepper spray making it a great all-around choice.

Release mechanism is not child-resistant and should be kept away from kids. 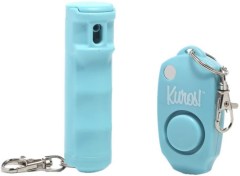 More than just a pepper spray, this comes with a keychain alarm that loudly lets people know where you are.

Alarm comes with batteries upon purchase. Pepper spray can be used effectively up to 10 feet and includes a high-strength formula that includes UV dye. Compact, keychain size makes this easy to take on travels.

Alarm can be set off accidentally if not careful.

Packaged in an unassuming lipstick case, this pepper spray is easy to disguise in a public space.

Spray up to 12 times at a range of 10 feet with this compact, undetectable pepper spray. Easy to use; just remove the cap and spray in the direction you want. The compact size makes this easy to fit in small bags or pockets.

Logo and label on lipstick container can give away that it’s pepper spray. 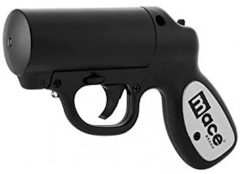 Pistol grip allows for precise targeting and once the trigger is pulled, the stream is constant until empty.

LED lights can confuse attacker and light up areas. Practice water capsule included and can be used before inserting pepper spray. The 20-foot spray range makes this able to reach long distances, even in windy conditions.

Gun style design makes this bulky and difficult to conceal. Not discreet.

Personal protection is a serious concern for many of us, but so is finding a method that is both effective and non-lethal. Small handguns have the stopping power to bring down an assailant from a safe distance, but they can also be lethal, difficult to operate, and illegal to carry in a purse or other concealed space. Stun guns can bring down a sizeable attacker, but they require close-range contact to be effective. A popular form of personal protection that is non-lethal, legal to conceal, and packs stopping power is pepper spray.

Pepper spray comes in a variety of strengths, from a minor irritant to a crowd-dispersing five million Scoville heat units. Pepper spray won’t deter every attacker, but it will make them reconsider their options. But with so many pepper sprays on the market, how do you choose the one that’s right for you? At BestReviews, our goal is to help consumers make the best purchasing decisions. Our reviews are accurate, packed with the information you need, and trustworthy — because we do our homework and never accept free samples from manufacturers.

If you’re looking for an effective form of pepper spray as self-protection, check out the product list above for our shortlist of the top five sprays out there. But if you need to know more before buying one of these powerful deterrents, just keep reading for our full shopping guide. 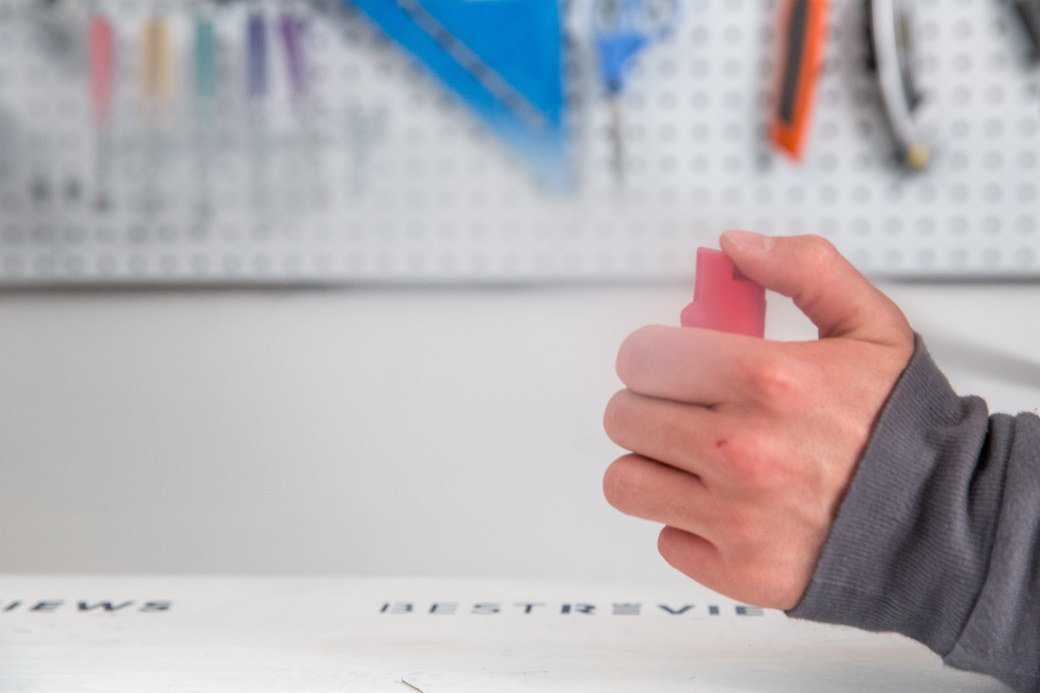 The pepper spray commonly sold to private citizens is a powerful skin and eye irritant with a strength of one million to two million Scoville units. It causes an instant burning sensation on contact with eyes or any exposed skin.

Considerations for selecting a pepper spray

While a pepper spray dispenser may look like any other spray can, it has some important differences. Because an accidental discharge can be disastrous to the user, most pepper spray canisters use a pin or other mechanism to keep the trigger locked between uses. Some safety mechanisms are harder to remove than others, so users need to rehearse the unlocking process in store or at home.

Precious seconds can be lost during an attack due to unfamiliarity with the firing process. Some pepper spray models are designed to provide a steady stream of fluid until the canister is exhausted. Make sure you know ahead of time if the spray is trigger-controlled or continuous.

Canisters that deliver a steady stream of pepper spray can be used at a distance of at least 10 to 15 feet, if not more. Since distance from the attacker is a good idea, we recommend purchasing a concentrated streaming dispenser over an aerosol model for most self-defense situations.

A pepper spray’s power is measured in Scoville heat units. The pepper derivatives used in pepper spray are generally in the one million- to three million-Scoville range. Police-grade pepper spray grenades used for crowd control can be up to five million Scoville units. Some manufacturers may exaggerate their product’s Scoville rating, but the higher the number, the greater the stopping power.

Some pepper spray dispensers are small enough to attach to a keychain, but their overall effectiveness is questionable. The victim may only get one shot at the attacker’s eyes or skin before the contents are exhausted.

A better form of pepper spray gun is small enough to carry in a purse, backpack, or gym bag but large enough to provide several shots of spray at a time. This is the ideal size for those who want the security of a personal defense weapon without feeling like they’re anticipating a confrontation.

The largest pepper spray canisters available to the public are designed to be clipped to a belt or holstered to the user’s leg. This amount of high-potency pepper spray is not generally recommended for casual joggers. People who purchase these canisters usually work in fields where the risk of confrontation with people or animals is high.

Pepper spray and the law

Before you purchase a pepper spray canister, it is important to understand the laws concerning its use. Check with law enforcement agencies before carrying pepper spray to other states or countries.

Should you carry pepper spray?

There are many different self-defense techniques and weapons available today, but they all have their limitations. Here are some reasons why pepper spray may be your best option.

Pepper spray is easy to carry and conceal

Carrying a concealed weapon such as a knife or handgun is often either illegal or heavily regulated. Quick access to those weapons can also be a problem. Some pepper spray canisters fit on a key chain or can be held in the user’s closed hand while walking or jogging. A larger canister of pepper spray can be carried in a holster or hooked to a belt.

Pepper spray’s effectiveness does not rely on accuracy

Unlike other self-defense weapons, pepper spray does not require the user to aim and fire with accuracy. Any meaningful skin contact with pepper spray should result in incapacitation. This temporary delay provides enough time for the victim to run for assistance.

Unlike an electric stun gun, a pepper spray user does not have to get within arm’s reach of an assailant. Stun guns only work when both electrodes make direct skin contact, and even then they may not deliver a debilitating blow. Once a powerful pepper spray makes contact, however, the attacker will usually be in too much pain to escalate the attack.

One concern many people have about self-defense weapons is the possibility of an accidental discharge. A child could discover a loaded handgun in a purse and pull the trigger without warning. A stun gun could seriously hurt someone if discharged by mistake. As painful as an accidental pepper spray discharge may be, the effects are temporary and non-lethal.

"Pepper spray for self-defense is derived from the same peppers you eat. A typical jalapeno pepper can have a rating of 2,500 to 8,000 Scoville units. Very high Scoville ratings, only found in police-grade pepper sprays, can cause excruciating nerve pain, a painful burning sensation, and even temporary blindness."
STAFF
BestReviews 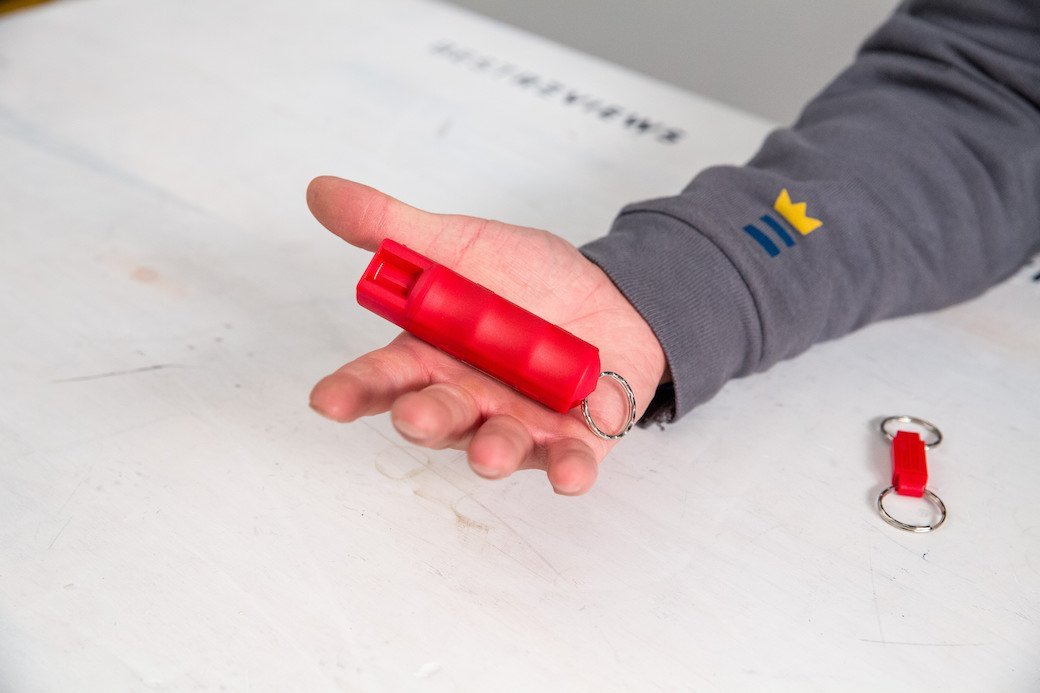 The ultimate goal of a self-defense weapon, such as pepper spray, is incapacitation and escape.

Q. Should I practice using my pepper spray canister from time to time?
A.
When dealing with a self-defense weapon, it is always a good idea to be comfortable with its use. You can practice removing the pepper spray from its usual location, unlocking the safety mechanism, and pointing it at a target in one controlled motion. Some pepper spray dispensers will allow users to make short test sprays for improved accuracy, but others are only designed for defensive situations. A few manufacturers include a water-filled dummy canister for practice purposes.

Q. Does pepper spray expire or lose its potency?
A.
Yes, most pepper sprays do have an expiration date printed on the canister or other packaging. Aerosol products in general lose their effectiveness over time, and the chemicals used to form pepper spray eventually break down. Many people don’t use their pepper spray canisters for years, so it helps to check the expiration date from time to time. Expired canisters can still be used for practice sessions, but they should not be considered reliable for self-defense purposes.

Q. What should I do if I spray myself or someone else accidentally?
A.
It is important to remember that the effects of pepper spray are painful but temporary. Prompt flushing of the affected skin with clean water should reduce the pain level considerably. Remove any clothing that is saturated with pepper spray. Apply an oil-free cream to help with skin irritation. Do not use oil-based lotions, which hold active ingredients against the skin longer.

Q. I’m a mail carrier on a walking route, and I encounter dangerous animals every day. Do I need special training or a license to carry high-power pepper spray?
A. The answer depends on your state’s laws and regulations concerning pepper spray ownership, as well as your employer’s policy on self-defense weapons. In many states, you must register your pepper spray dispenser with local law enforcement, especially if you plan on carrying a four-ounce supply of police-grade pepper spray in public.

Best of the Best
Mace
Triple Action Police Strength Pepper Spray
Bottom Line
With features like UV dye, long-range, and a secure flip-top lid, this is a great pepper spray to keep with you wherever you go.
Shop Now

Best Bang for the Buck
Sabre
3-IN-1 Pepper Spray – Advanced Police Strength
Bottom Line
Portable with a strong, wind-resistant stream, this is a great 3-in-1 option for joggers, women, and delivery professionals.
Shop Now 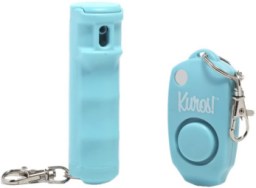 Top Pick
Kuros! by Mace
Pocket Pepper Spray and Personal Alarm
Bottom Line
More than just a pepper spray, this comes with a keychain alarm that loudly lets people know where you are.
Shop Now 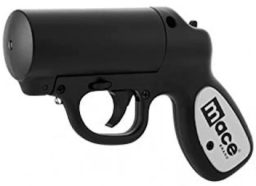 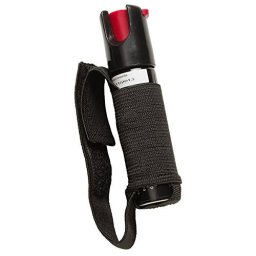