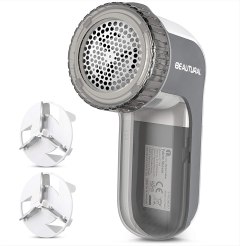 With multiple adjustable features, this product works great on a variety of different fabrics.

Has 3 shave heights, 2 speeds, and 3 shaving hole sizes for preferential setting. Comes with extra blades. Is battery-powered and has an adjustable height spacer and safety lock.

May have to go over the fabric a few times to remove all lint. 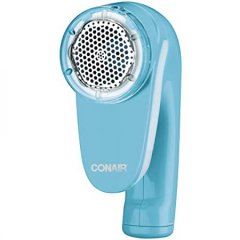 A well-priced model that offers durable performance and works well for travel, according to our cleaning expert.

Offers an impressive feature set for the price, which includes an easy-grip handle, sleek design, and adjustable distance control to fit a variety of materials.

Has the tendency to fill quickly when used on heavy materials, but it is easy to clean. 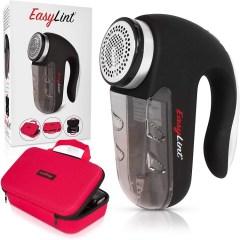 A small but powerful machine with a long cord that can handle a variety of tasks.

Features a 5-watt motor for strong performance. Works for removing pilling on clothes and furniture. Blades are replaceable. Comes with a case for travel portability and storage.

Some buyers said they received a model that didn’t work. 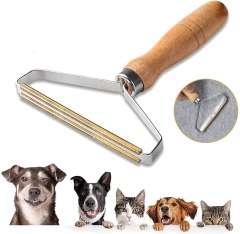 Our cleaning expert appreciates the convenience and affordability of this manual tool.

Can be used on a variety of fabrics such as clothes, car interiors, and furniture. Softly removes hair and lint with its pure copper head. No batteries are needed and it is reusable.

A few customers reported that its use on the furniture damaged the fabric. 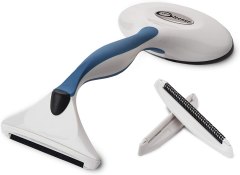 An effective lint remover that can be customized for different lint-removal needs, and doesn't require batteries or electricity to operate.

Manual, dual-sided tool with a lint brush on 1 end and lint remover edge on the other. Includes 3 interchangeable edges for various types of fabrics.

Even the delicate edge may snag some fabrics. Takes some time to remove heavy lint.

Nothing affects the look of a sweater quite like lint or fuzzy pills all over the fabric. A lint remover is a great way to make sure that your clothing looks as pristine as possible no matter how many times you’ve worn it.

With this handy little device, you can take the lint and pills off your sweaters, shirts, or pants in a matter of minutes. If you want a completely lint-free wardrobe, it’s important to choose the right lint remover. That means knowing what size, power type, and other features to look for. 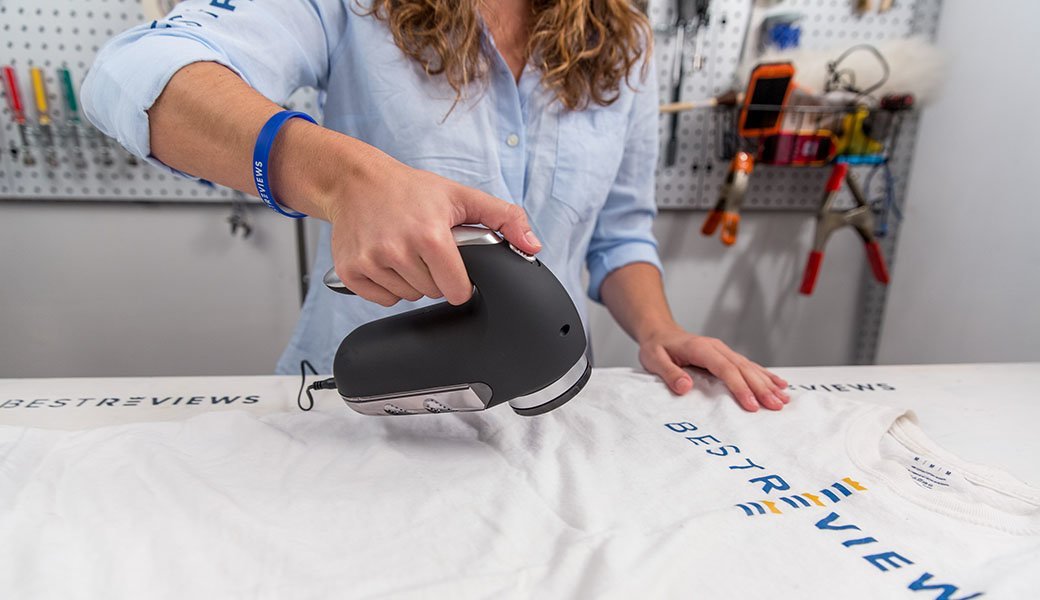 Friction causes nearly all fabrics to eventually develop lint, pills, and fuzz, which can make your clothing look shabby and old.

How a lint remover works

A lint remover is a handheld tool with at least one covered blade and a motor that moves the blades.

The device may run on batteries or have a cord that plugs into an electrical outlet.

Expert tip
Clean out your lint removers after each use. This makes using it easier next time.
Ketia Daniel
BestReviews Cleaning Expert

A lint remover can sometimes be confused with a lint roller. While they serve the same purpose, they operate in different ways.

A lint roller has an adhesive strip. Lint and debris from the fabric stick to the adhesive when you roll it over the clothing. It can be fairly effective in removing loose lint or fuzz, but it doesn’t work well on deeply embedded lint or pills that are still attached to the fabric. 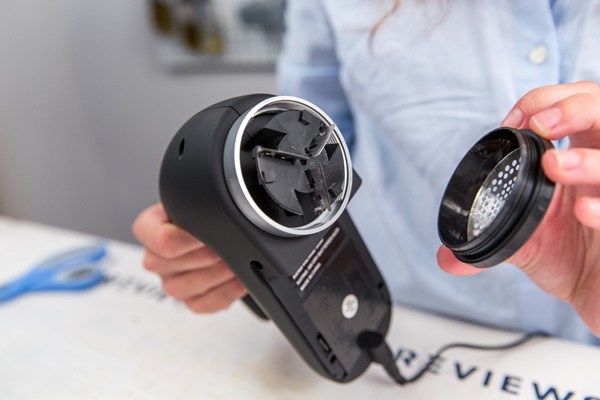 We look for lint removers that provide sufficient enough power to cut fuzz and lint. We typically recommend products that have 3-watt motors and higher. 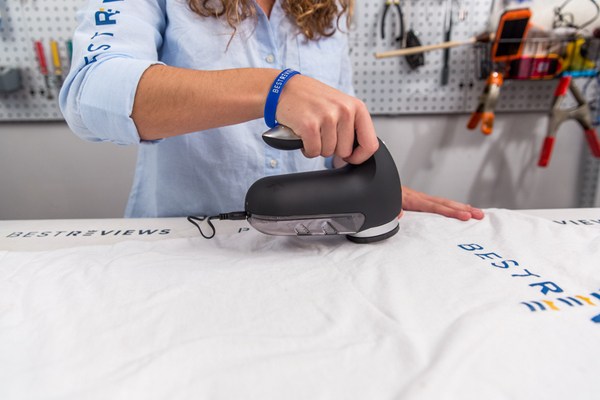 Most lint removers need to be fairly compact to provide a better user experience. We research the weight of each option to provide adequate recommendations. 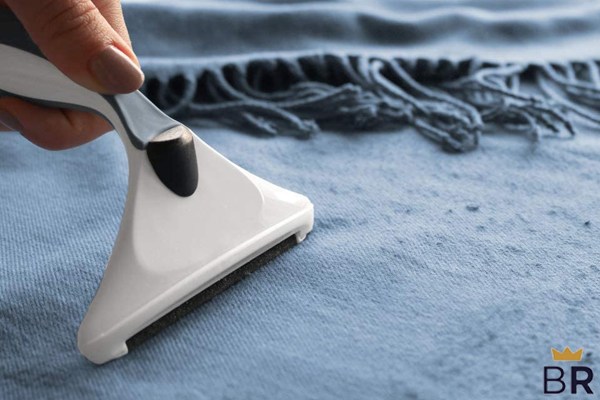 One of the more important aspects of lint removers is the handle. We vet each product for how comfortable it is to hold over long periods. 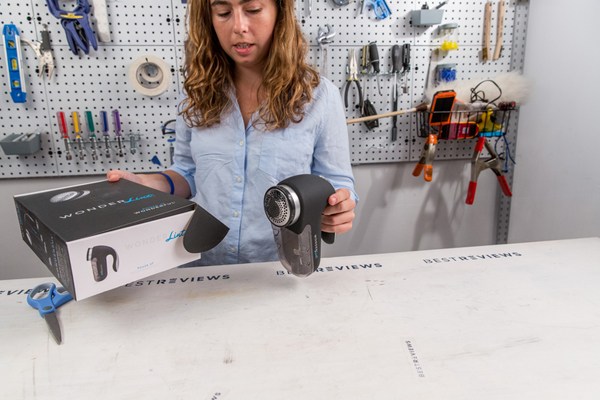 All lint removers utilize a set of blades to remove fuzz and pills from fabric. Our research looks into each of these products to see how well these blades work. 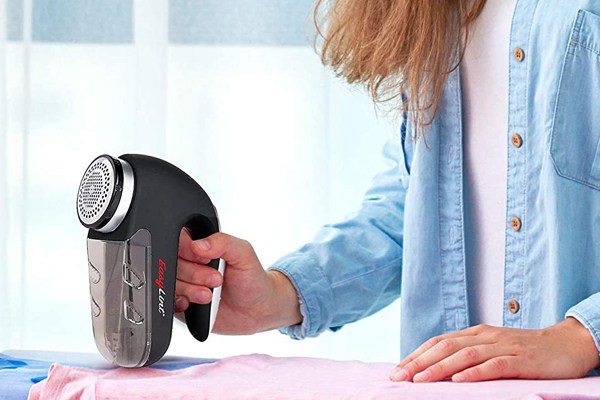 Lint removers can sometimes utilize batteries to provide portability. We assess these options to see if they provide enough power to work on a variety of surfaces 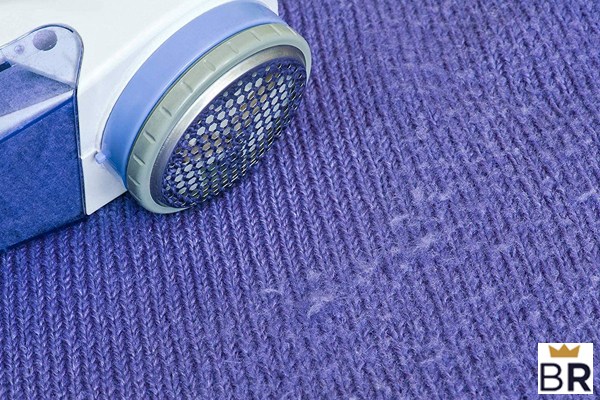 An effective lint remover will oftentimes provide a waste collector. Our research makes this feature a priority when vetting each product.

We take into account how much depth a lint remover can provide. This allows us to make recommendations for products that work on a wide variety of different fabrics. 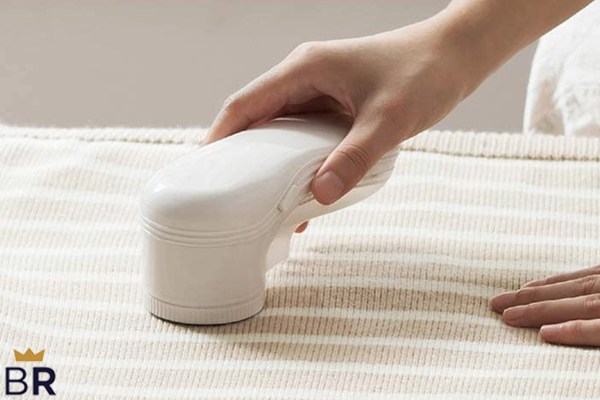 Most lint removers have a shaving size of at least 1 inch. We look for options that provide this size and higher so that it takes less effort on your part to remove all the lint you need.

Most lint removers will range in price from $10 to $40. We weigh the pros and cons of each unit and find the best value for the price point. 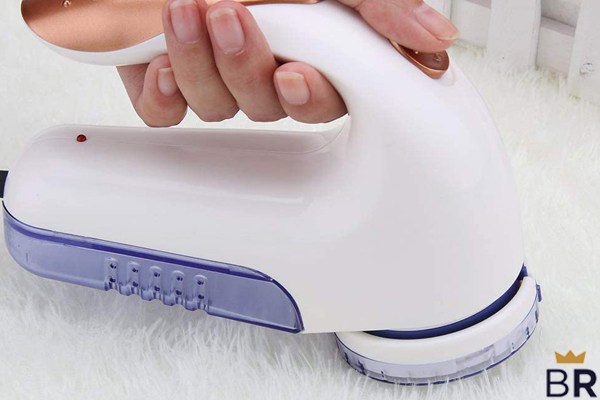 Most lint removers will shut off if too much fuzz or string gets caught in the blade. We look for each product to utilize safety features such as an automatic shut-off.

Some battery-operated models can also be connected to an AC adapter, so the device is always ready when you need it.

A lint remover is a fairly small, compact device. It's important to choose a lint remover that is comfortable in the hand and weighs between three and six ounces.

You want the lint remover to be as comfortable to hold as possible. Look for a model with an ergonomically designed handle. U-shaped handles are usually the most comfortable.

Most lint removers feature a series of blades, usually three, to remove the lint fully and effectively. You can also find lint removers with as many as six blades for the closest, most thorough lint removal.

A lint remover doesn’t require a very powerful motor to be effective. However, you want to be sure that the model you select has enough juice to get the job done.

For the best results, choose an option with at least a three- to five-watt motor.

A lint remover collects lint and fuzz in a waste bin, which must be emptied regularly if the device is to operate properly.

Look for a device with a clear bin. It allows you to see how much lint has been collected and if it’s time to empty it.

"You’ll know that it’s time to empty the waste bin when the lint remover starts to slow down."
STAFF
BestReviews

To protect your clothing, choose a lint remover that allows you to adjust how close the blades come to the fabric. This lets you successfully remove lint from both tightly woven and loosely woven materials.

Look for a model that offers two or three cutting depth options.

Expert tip
Always charge your electric lint removers after each use. That way, you'll have a full charge for your next use.
Ketia Daniel
BestReviews Cleaning Expert

Lint removers vary in price based on their motor power, number of blades, and other features.

The least expensive lint removers have a 2- to 3-watt motor and three blades, and they typically cost between $10 and $15.

High-end lint removers come with a 4- to 5-watt motor and three or more blades. For these models, you can expect to pay between $25 and $40 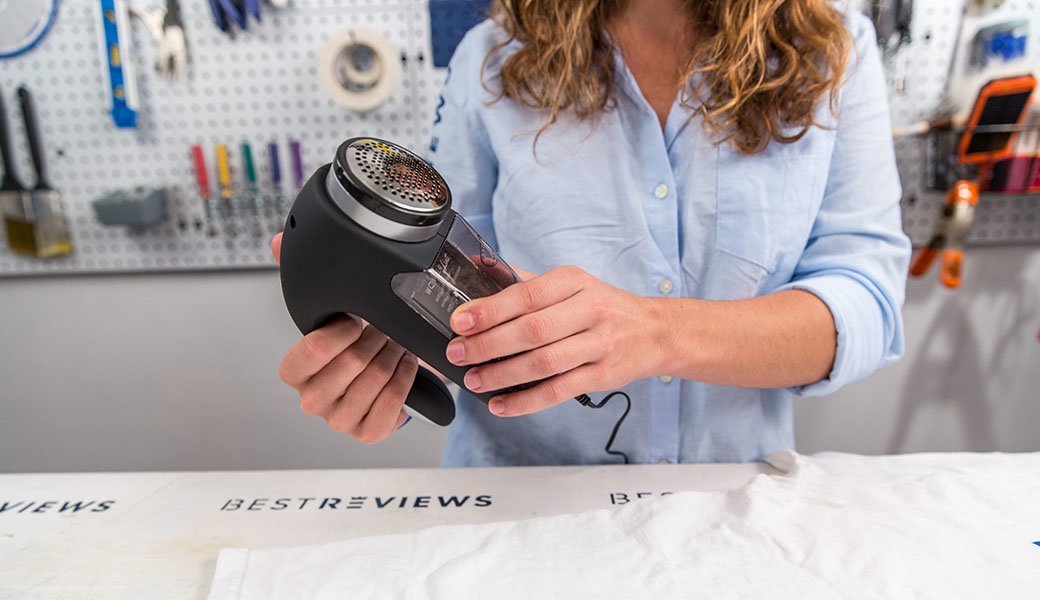 A lint remover isn’t just for removing lint and pills from clothing. You can also use it on upholstered furniture.

A. Because it uses blades, a lint remover can create holes, tears, and rips in fabric if it’s not used properly. Use gentle pressure when you run the device, and adjust the cutting depth to account for the tightness of the fabric weave.

Q. Can you use a lint remover on cashmere?

A. While you have to treat cashmere carefully, it is usually tightly woven, so it works well with a lint remover. As with any fabric, though, you should run the tool over the cashmere very gently to avoid creating rips or tears.

Q. How do you clean a lint remover?

A. Use a damp cloth to clean the body and handle of the lint remover. You can also use the cloth to gently clean the shaving surface and blades. Some devices include a small detail brush that allows you to carefully remove any lint, fuzz, and pills trapped in those areas. It’s important not to get water or other liquids inside the lint remover. 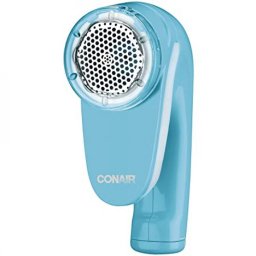 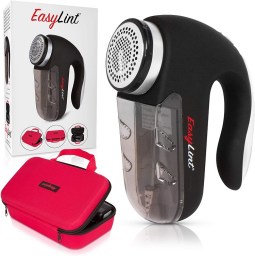 Top Pick
EasyLint
Professional Sweater Shaver
Bottom Line
A small but powerful machine with a long cord that can handle a variety of tasks.
Shop Now 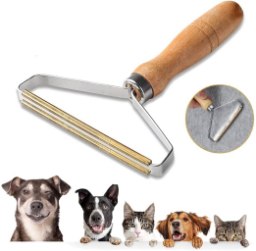 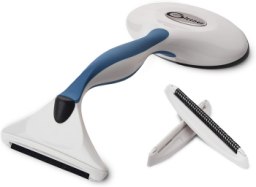 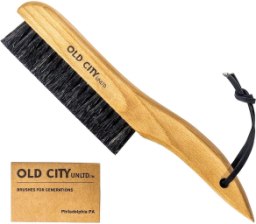 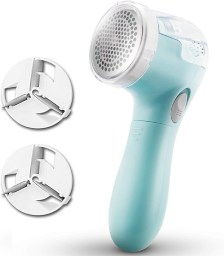 Top Pick
Feeke
Lint Remover
Bottom Line
A basic battery-powered model that is inexpensive and works on most types of fabrics.
Shop Now 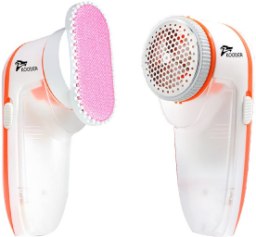 Top Pick
KOODER
Multifunctional Rechargeable Fabric Sweater Shaver and Lint Remover
Bottom Line
If you like the idea of a rechargeable model, this powerful tool is a sound option.
Shop Now 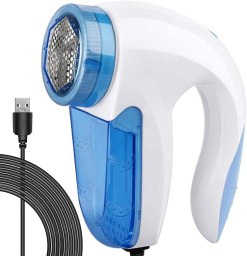 Top Pick
Anwenk
Electric Lint Remover
Bottom Line
Not as versatile as other models we tested, but it's a solid choice if you are looking for a powerful tool.
Shop Now 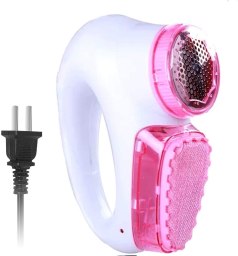 Top Pick
Luvolux
Lint Remover and Sweater Shaver
Bottom Line
It has a few convenient features, but others we reviewed have more to offer.
Shop Now