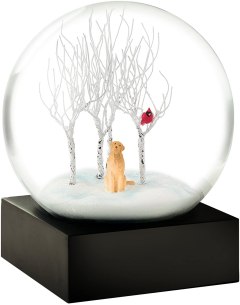 This well-made piece of art features a red cardinal, golden retriever, and white birch trees in the winter.

Each piece is durable and made of high quality material. Has a strong, well made, and elegant base. Items inside are intricate. Reviewers loved the attention to detail in the scenery. Comes in a cushioned gift box.

Smaller than expected. Costly, but most said it was worth the price. 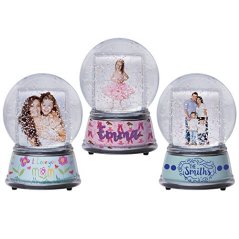 Make your own unique memorabilia with photos, artwork, or anything else you desire.

These make for the perfect gift. They come with inserts to change out the base or design one of your own. The insert for wallet-size photos can be seen from both sides, so you can use 2 back-to-back, or write on one side. Is made of durable plastic.

Instructions are lacking and may be a bit tricky to assemble. 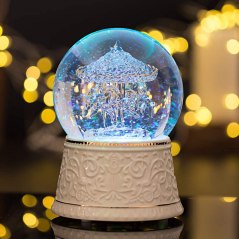 Wind up feature below that makes the carousel spin slowly. Includes colorful lights and soothing music. Beautifully designed and well-constructed base. Comes with batteries and prewrapped in gift packaging.

A few said the music box stopped working for them. 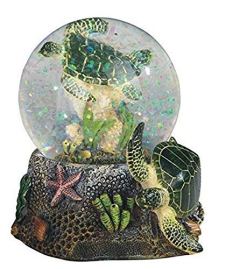 The vivid colors and 3D arrangement of the base sets this one apart in terms of craftsmanship and design.

Sea animals appeal to a wide range of people, so this high-quality design will work well as a thoughtful gift. There's a lot of detail in the figurines. Made of poly resin for durability.

At 3.75 inches tall, it is small in size. Some arrived broken. 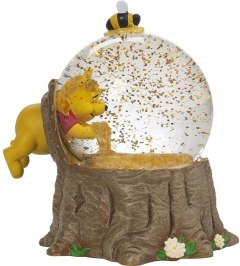 Disney lovers will enjoy this keepsake featuring Winnie the Pooh stuck in a tree trunk while eating honey.

Plays the original Winnie The Pooh theme song. Easy to wind up and play music. Detailed with gold glitter on the inside. Reviewers loved that the base and objects inside were painted well. Comes with batteries.

Many received the product with the bee broken off.

There is nothing that quite matches the feeling of being able to hold a little world in your hand and make it snow. Snow globes have intrigued the world for over 100 years. They come in many designs and can range from just a few dollars to several hundred dollars. But what criteria do you use to determine which snow globe is best for you?

Craftsmanship and material quality matter, but beyond that, a snow globe needs to meet the aesthetic needs of the collector. If you're not a fan of Disney, no matter how perfect that Mickey Mouse snow globe is, you will never truly love it. Also, it is important to decide if you want a seasonal item or one that you can proudly display all year long. 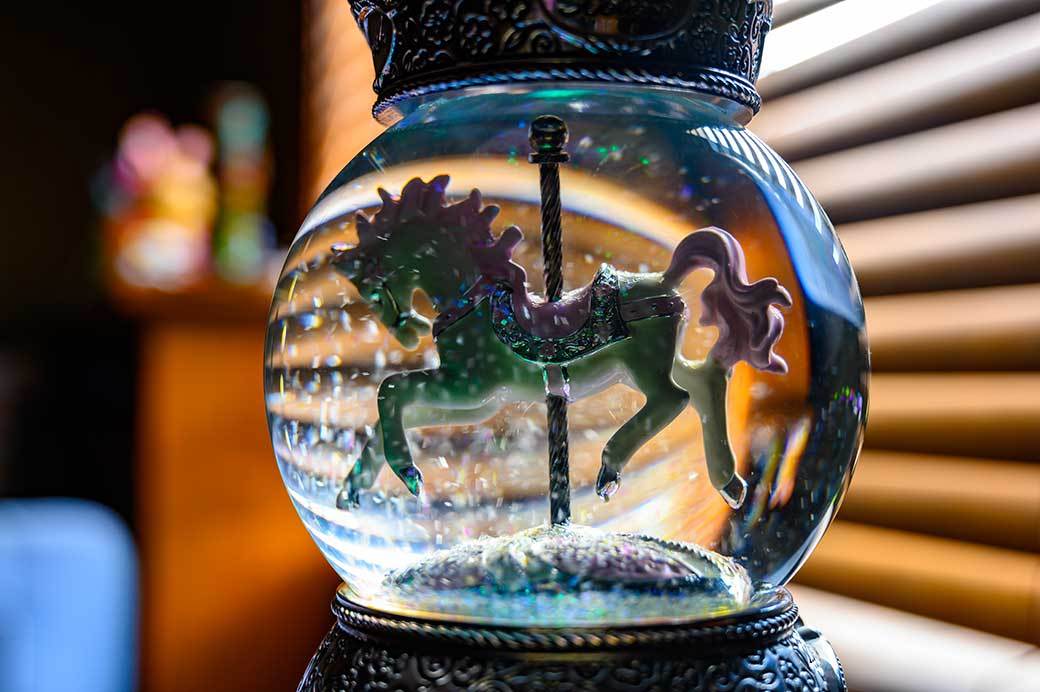 Before becoming the popular decorative keepsakes they are today, snow globes were essentially modified paperweights.

Finding something you love

A snow globe is a decorative item, so you will want to choose one that features a theme you enjoy. If you intend to display it year-round, you will want something that fits the general décor of your room. Take into consideration the color and shape of the base.

There are two exceptions for finding a model that matches your room. The first is if you already have a collection. In that case, you will likely want a snow globe that fits your collection, such as a Disney scene or a sightseeing destination. The second exception is if you plan on using your snow globe as a holiday decoration. In that case, you will want a model that stands out and adds a little seasonal magic to your home.

After you've settled on the aesthetics, the general look, and theme of your snow globe, it's time to look at the more practical elements and features.

The globe can be made of glass or plastic. Each material offers advantages. A plastic globe is durable, lightweight, safer around children than glass, and typically less costly. A glass globe is also durable, but it is heavier and more elegant in design than plastic. If it breaks, the pieces pose more of a hazard for children and others nearby.

The base could be made of numerous materials. Some of the priciest snow globes simply have bases of plain wood. Ceramic and plastic are also common. Sometimes, the base is an extension of the scene. Other times, it serves as a simple or ornate pedestal.

Some snow globes offer ways to personalize them. The two most common methods are an engraved plate with a personal message or a photo that can be placed inside the globe.

The materials suspended in water, the “snow”, is what gives a snow globe its magic. Do you want white flakes, glitter, or a combination of the two? Also, be sure to get a snow globe that has enough snow because in most instances, you are looking for a blizzard, not flurries.

The figure or scene and the snow are what you want to focus on when gazing into a snow globe. The water should be crystal clear with no signs of algae or discoloration. Ideally, there should be some viscosity to the water, so the snow stays suspended longer to create a dynamic effect.

Pay close attention to the care that went into building your snow globe. You don't want a hastily painted model or one that is disproportionate with its own design elements.

It's hard to get an idea of size if you are just looking at a picture. Check the measurements to be sure the snow globe you are considering is large enough or small enough for your space.

"Believe it or not, some crafty individuals have created smart snow globe prototypes that alert you to weather forecasts and school closures. It might not be long before the snow globe becomes another essential component of your home WiFi hub. "
STAFF
BestReviews

Not all snow globes are round. If you want one in the shape of a candle or lantern, for instance, those are both options.

In many products, heavier is not better. Since snow globes were initially designed to serve as paperweights, however, the heavier models tend to be more desirable.

Many snow globes feature music. Some are traditional wind-up music boxes while others are battery-powered units that play a variety of short tunes.

If you would like your snow globe to be lighted or change colors, look for a model that can do that.

Some snow globes are motorized and feature a small fan the keeps the water swirling so you do not have to manually invert your snow globe every time you want to see it in action.

Snow globes can be powered by batteries or a plug — usually a USB plug. A battery-powered model can be placed anywhere and has a cleaner design, but it will require you to get additional batteries from time to time. A plug-in model will always have power, but its location will be limited to the length of the cord.

If you forget to shut off your snow globe, you can burn through the batteries in a day or two. Many models feature a timer that automatically shuts the globe off after a designated amount of time, so this doesn't happen.

If you are a collector, you will want to pay close attention to elements that make a snow globe more valuable over time. Look for limited editions, high-quality design, and snow globes that are in pristine condition.

Did you know?
Initially, the artificial snow in snow globes was made of bone china, porcelain, or non-water-soluble soap flakes. Today, the snow is made of plastic.
STAFF
BestReviews

Snow globes can range in price from just a few dollars to several hundred dollars and more. There are exceptions, but in general, you can expect snow globes to adhere to the following price breakdown.

Inexpensive: Under $20, snow globes are usually made of plastic. They are lightweight with few extras, although it may be possible to find one with music.

Mid-range: In the $20 to $30 range, you start to find better-built snow globes made of glass. Many of these models are still lightweight and feature an ornate plastic or ceramic base that is an extension of the scene inside the globe.

High mid-range: From $30 to around $50, you can find snow globes in other shapes, such as lanterns. The models in this price range tend to be ones that feature extras such as music, lights, USB or battery power, a timer, and more.

High-end: Curiously, once you move toward higher-priced snow globes, the design tends to get more basic or elegant. For example, you might find a glass globe featuring an ornate, hand-painted scene that is simply mounted on a stylish wooden base. These models are often heavier and may feature personalized engraving.

Did you know?
At one time, snow globes were only popular in the winter. Today, there is such variety that many snow globes can be displayed year round.
STAFF
BestReviews

There is a tendency to get a snow globe and then neglect it. If you do this, over time, your snow globe will lose a bit of its magic. In order to get the most enjoyment out of your choice, here are a few tips on how to care for your snow globe. 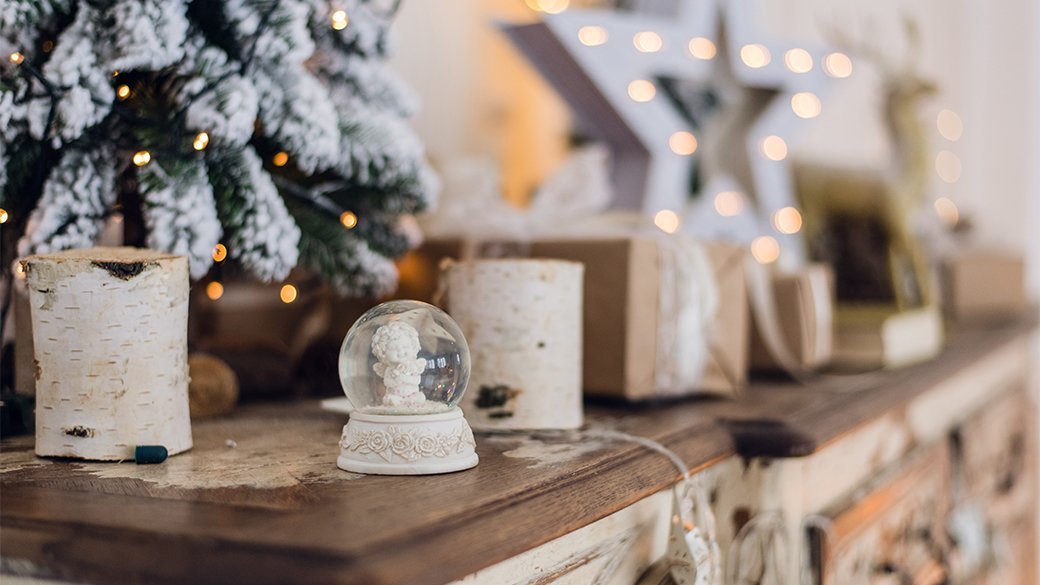 Snow globes featuring winter, religious, and holiday scenes first became popular in America in the 1920s. By the 1940s, snow globes were also being used to advertise travel destinations such as hotels and amusement parks.

Q. The water in my snow globe looks dingy. What can I do?
A.
Most snow globes feature a plug on the bottom so you can change out the water if needed. The process is not hard, but it does require patience and a steady hand. The old water will need to be removed, usually using a device such as a turkey baster so you are less likely to lose any snow. You may even clean the inside of the snow globe while you have it apart by swishing some mild cleaner and water around on the inside. Finally, you will want to refill the snow globe using distilled water so there are no impurities that will cause the new water to change color over time.

Q. I dropped my snow globe and the glass broke. Is it ruined?
A.
Not necessarily. There are individuals who specialize in snow globe repair. If the snow globe is a cherished item with emotional significance, you may want to investigate your repair options and costs before discarding the item.

Q. Are snow globes worth anything?
A. Just like any collectible item, some snow globes gain worth over time while others do not. If you are interested in making an investment, the key is collecting the right type. Vintage snow globes, old original Disney character snow globes, and even a few snow globes that were originally advertising giveaways are now worth thousands of dollars. When collecting snow globes for more than personal pleasure, look for quality materials, quality of craftsmanship, a strong base, intricacy of detail, unique or rare models, and snow globes that are in pristine condition. 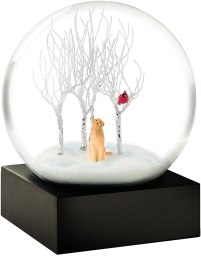 Best of the Best
CoolSnowGlobes
Lab in the Woods
Bottom Line
This well-made piece of art features a red cardinal, golden retriever, and white birch trees in the winter.
Shop Now 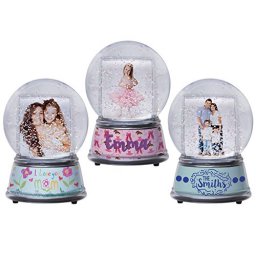 Best Bang for the Buck
Neil Enterprises
Create Your Own Photo Snow Globe
Bottom Line
Make your own unique memorabilia with photos, artwork, or anything else you desire.
Shop Now 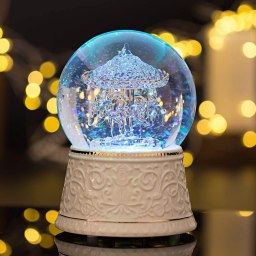 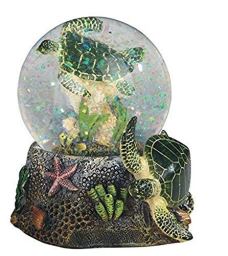 Top Pick
StealStreet
Marine Life Snow Globe
Bottom Line
The vivid colors and 3D arrangement of the base sets this one apart in terms of craftsmanship and design.
Shop Now 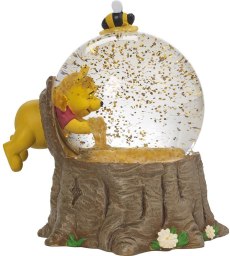