Instantly freshen any room or garment with these delicate, nature-inspired scents that avoid harsh chemical smells.

These products smell different from your typical air fresheners, and may not be for everyone. Expensive for the volume you get. 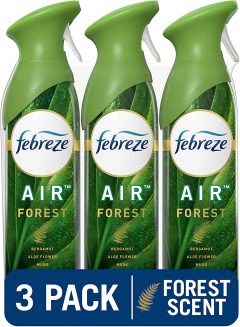 We love the Forest scent of this Febreze air freshener spray, and its unbeatable price is a plus as well.

The scent was too overpowering for some users, but this product also comes in other scents which may be better suited.

Simple to use and active for hours after each application, Glade air fresheners are a sweet-smelling solution.

Large variety of available scents, including Red Honeysuckle Nectar and Crisp Waters. Effective at combatting stubborn odors. Lasts for up to 7 hours at a time. Ergonomic design. Convenient case of 12 cans.

While Glade’s air fresheners smell good, keep in mind that these sprays are not air disinfectants. 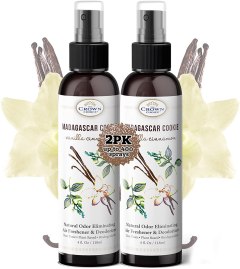 Thanks to its all-natural composition, this is the best solution for anyone who is sensitive to overpowering chemical-based air fresheners or has young children and pets.

Nontoxic formula. Made with essential oils. Safe for use around pets and children. Many scents available, such as vanilla cinnamon and patchouli sandalwood. Effective at neutralizing strong odors, such as from pets or smoke.

We like this plant-derived and fresh-smelling formula, but these air fresheners won't maintain as long as chemical-based competitors. 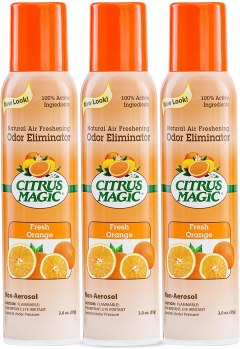 Citrus Magic is a surprisingly powerful air freshener that quickly eradicates the most powerful of smells, while replacing them with crisp orange, berry, and lemon scents.

It may seem like you aren’t getting much when you first see the trio of 3-ounce bottles, but a little goes a long way.

What do pets, kids, and fried fish all have in common? They can leave behind stinky odors. Your first instinct is to grab a can of air freshener and attack the offending odor. The world of air fresheners has numerous options, from sprays to gels, and it helps to know the differences and what they offer.

The dozens of types of chemical and natural air-clearing products on the market can be separated into two categories, but they also tend to overlap: air fresheners and odor neutralizers. If you’ve wondered why your air freshener isn’t doing what you want it to do, it may be because you’re using the wrong type for your needs.

Air fresheners temporarily mask offensive odors in the air. Odor neutralizers eliminate unpleasant scents in the air by creating a chemical reaction that zaps them away. Each type has its pros and cons. 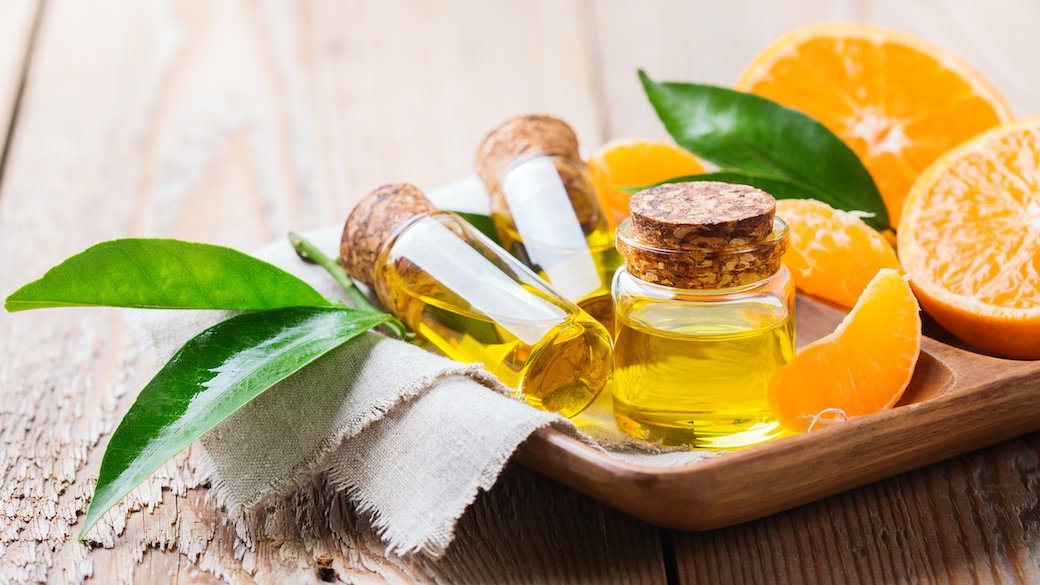 Make your floor vents disperse scent throughout a room by attaching a clip-on car air freshener or applying dabs of your favorite essential oils to the vents.

Since they’re inexpensive, you can experiment with popular types of air fresheners (we’re not including scented candles here) to find your favorite. Each type handles odors in a different way and with varying effectiveness. You might like one type of air freshener or odor neutralizer for a specific room or purpose.

Similarly, you may want to eliminate odors in your garage or basement. But a sprayed floral scent won’t do the trick as well as a scented moisture-absorbing gel, which can eliminate the smell of must. In that same vein, an odor-neutralizing spray that also sanitizes the air could be useful in a baby nursery.

Air fresheners last for varying amounts of time. For example, a battery-operated automatic dispenser set at the lowest setting for a mist may last for up to 60 days before you need a refill. A four-ounce bottle of natural essential oil air freshener typically has 200 spritzes before you need a new one. A solid cone may last up to 30 days if you slowly twist the top up to expose the wax. A small tub of beads may last up to 60 days.

Ergonomic cap: Spray caps should be easy to access, and all sizes of fingers should be able to fit and comfortably press the nozzle.

Noise level: If you want a silent spray and not one that sounds like a hissing cat, look for cans and automatic dispensers that state they feature softer, quieter mists.

Designed diffusers: Electric and battery-operated automatic spray dispensers come in numerous colors and finishes so the device blends in with your home décor.

Motion sensor: An air freshener dispenser with motion sensor technology activates the unit to release scent. It creates a burst of spray when a tiny LED light beam is broken as you pass by the unit. Units with motion sensors don’t have timers.

Timer: Automatic air freshener dispensers can be set to spray a burst of scent in varied increments of time, such as every nine, 18, or 30 minutes.

Boost button: An automatic spray dispenser that has an easy-to-reach boost button lets you manually spray freshener between timed spritzes.

Mounting: Look for a round opening on the back of an automatic spray dispenser if you’d like to hang it on the wall.

A note about safety

Most people can avoid suffering chemical sensitivities or other reactions by using a natural, plant-based essential oil product. Some blends of 100% essential oil fresheners are even safe enough to use as a body spray, according to manufacturers.

Mid-range: In the $5 to $10 range, you’ll begin to find more multipacks of air fresheners, automatic spray refills, and larger packs of solid fresheners. 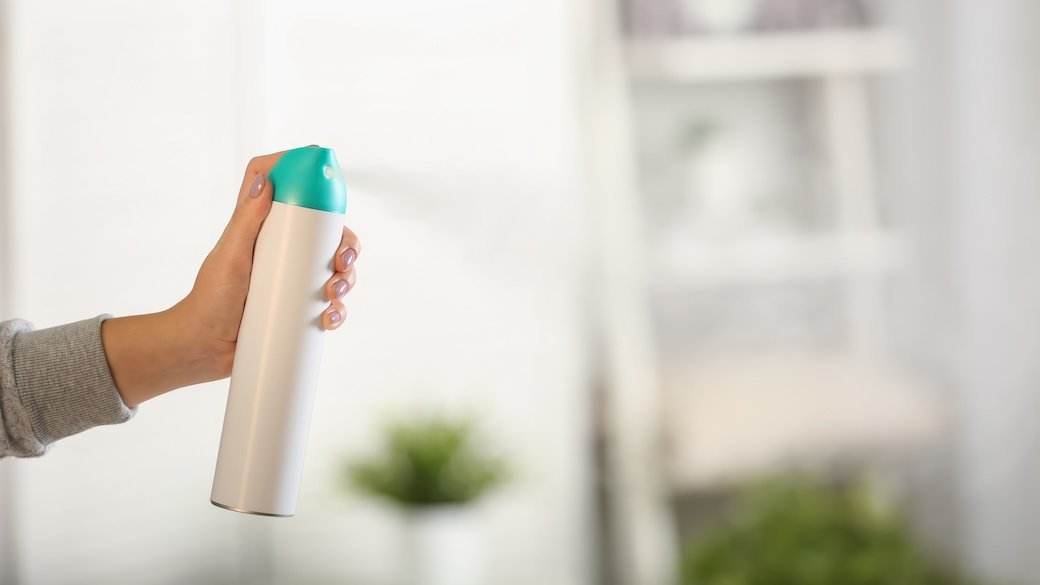 Air fresheners and disinfectants have a shelf life of about two years, at which time the effectiveness and fragrance begins to diminish.

Q. Can air fresheners be used in a car?

A. There are concerns that air fresheners can pose health risks if they’re overused, placed near an open flame, swallowed, or allowed to touch the skin. Fragrance beads are especially attractive to toddlers and children who ingest them thinking that they’re candy. Always check the label if you’re concerned.

Q. Do air fresheners cause headaches?

A. Air fresheners made with volatile organic compounds (VOCs), which are synthetic chemicals, can trigger headaches, coughs, itchiness, or a runny nose. Many people are never triggered by these chemicals. To avoid headaches or other symptoms, try fresheners that use essential oils.

Q. What’s the difference between air fresheners and aromatherapy products?

A. There’s a bit of crossover between air fresheners with essential oils and aromatherapy products. Aromatherapeutic essential oil products are used to relieve symptoms of stress and other conditions. However, if you are serious about practicing aromatherapy, you’ll want to shop for products with therapeutic-grade oils, which are not typically included in commercial fragrances. 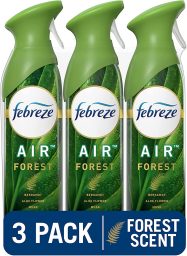 Best Bang for the Buck
Febreze
Air Fresheners Spray
Bottom Line
We love the Forest scent of this Febreze air freshener spray, and its unbeatable price is a plus as well.
Shop Now

Top Pick
Glade
Room Spray
Bottom Line
Simple to use and active for hours after each application, Glade air fresheners are a sweet-smelling solution.
Shop Now 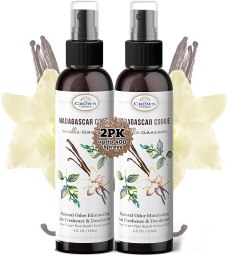 Top Pick
The Crown Choice
Natural Essential Oil Air Freshener Home Spray
Bottom Line
Thanks to its all-natural composition, this is the best solution for anyone who is sensitive to overpowering chemical-based air fresheners or has young children and pets.
Shop Now 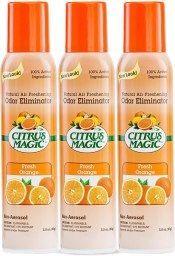 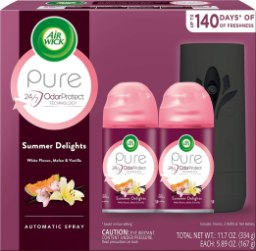 Top Pick
Air Wick
Life Scents Freshmatic Automatic Spray Kit
Bottom Line
This air freshener from Air Wick is an excellent “set it and forget it” system that will keep a room smelling like lavender, cinnamon, or your personal favorite scent for months at a time.
Shop Now 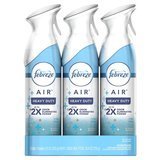