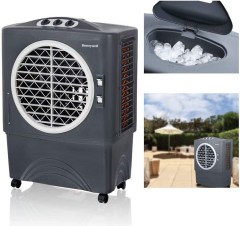 A large, high-quality outdoor option that is designed for use in open rooms, decks, patios, garages, and backyards.

Moves 1,062 to 1,471 cubic feet per minute up 29 feet to cool over 600 square feet. Convenient ice compartment for extra cooling. Can be connected to a hose for continuous refill. Uses triple-sided honeycomb for better airflow.

The unit can run somewhat loudly. 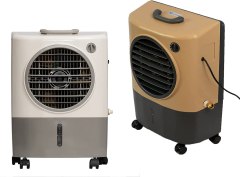 An all-around model for at home indoors or on the patio; can attach to a hose for automatic filling.

Indoor/outdoor operation. Airflow rating at 1,300 cubic feet per minute. Can cool up to 500 square feet. Easy operation. Fills manually or automatically by attaching a garden hose with included adapter. Has non-cooling fan mode.

Not intended for extreme or all-weather outdoor use. No auto shutoff. 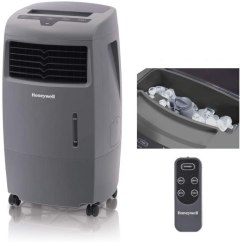 This indoor/outdoor option uses the power of ice and offers a compact footprint with an attractive design.

Airflow rated to 500 cubic feet per minute to cool up to 300 square feet. Reach of up to 28 feet. Can use ice for extra cooling. Indoor and outdoor operation with some weather resistance. Comes with a remote.

Not designed to work in humid climates. Some reports of water leakage.

Cool a small indoor room with this combination model with remote control.

Offers up to 250 cubic feet per minute of airflow to cool up to 100 square feet of area. Three fan speeds and cooling modes. Can also be used as a fan. Honeycomb pad air purifier is washable. Offers remote control and timer operation.

Tank lasts an average of only 8 hours. Doesn't work in humid climates. 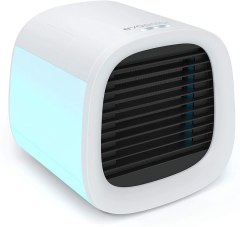 A personal-sized model with a stylish design and good, quality construction.

Cools directly in front of the unit up to 45 square feet, enough for a desk or bed. Uses inorganic fiber materials to reduce chance of mold or mildew. Weighs only 2 pounds. Quiet at less than 50 dB.

Very small effective range. Only lasts up to 9 hours per tank.

If you’re looking for a cost-effective, more environmentally friendly way to cool your home, an evaporative cooler is a great option. Also known as “swamp coolers,” evaporative coolers are designed not for humid conditions but rather for arid, dry, hot climates such as those found in the American Southwest and West.

Not everyone is familiar with the benefits of the evaporative cooler and how it can save money on electricity while freshening and humidifying the air in your home, so you might be unsure how to find the right unit for your needs.

At BestReviews, we give you the facts to help you choose the correct size and type. So, pour a cool drink, scroll down, and take a fresh look at these incredibly effective cooling units. 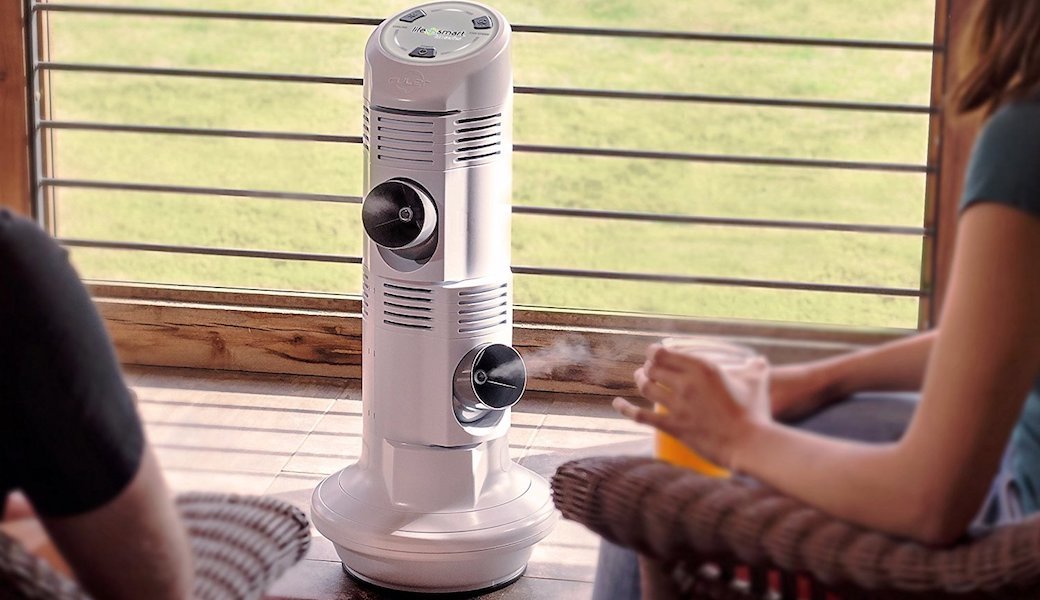 The humidity created by an evaporative cooler can be beneficial for fabrics and wood in arid climates.

Evaporative coolers are very effective at refreshing dry, stale air through their circulation process, which draws in dry air, passes it over moistened padding inside the unit, and then blows out slightly humidified, fresher air. It can lower the temperature in a room or house by 5°F or more.

An evaporative cooler costs less to purchase than a traditional air conditioner. It also requires less energy to complete the cooling process. That means owners will pay less over the life of the evaporative cooling unit than they would for an air conditioner of similar size and power rating. In some cases, that savings can be as much as 50%, and some brands claim as high as 75%.

Unfortunately, evaporative coolers don’t work well in climates with more than 60% humidity, so they’re not a good choice east of the Mississippi or in parts of the Northwest. However, if you live in a drier climate, such as in west Texas or California, you’re in luck. The past few years have seen a big increase in the number and types of evaporative coolers available. In short, there is an evaporative cooler to suit your needs and the space you want to cool.

Air conditioners cool the air inside the home by drawing in warm air and passing it over an evaporator coil that has been cooled using a refrigerant (usually a hydrochlorofluorocarbon like R-22 or R-410A). This also removes some of the humidity from the air in the form of condensation. The drier, cooler air is then circulated back into the home. While it’s effective and popular, air conditioning uses more energy than evaporative cooling. The price of an air conditioner, particularly at a higher cubic feet per minute (CFM) rating, is often significantly more than an evaporative cooler, and it costs more in electricity to run over the long term.

There are two types of evaporative coolers: direct and indirect.

Direct: The most common and affordable evaporative cooling type, direct coolers pass air directly over or through water-saturated padding, returning cooler, humidified air to the room or house.

Indirect (or two-stage): A newer type of evaporative cooling, indirect cooling uses a secondary air stream that is pre-cooled, helping to cool down the primary air stream (the air that will circulate into the house) even more efficiently. This is a pricier unit, but it works very well in areas where daytime temperatures climb above 100°F.

There are  two ways for an evaporative cooler to deliver cooled air: down flow and horizontal flow.

Down-flow coolers: The original evaporative coolers, down-flow (or down-discharge) coolers are mounted either on the roof or the side of a home. Air is drawn into the unit, cooled and moisturized, and then discharged downward into the living space. 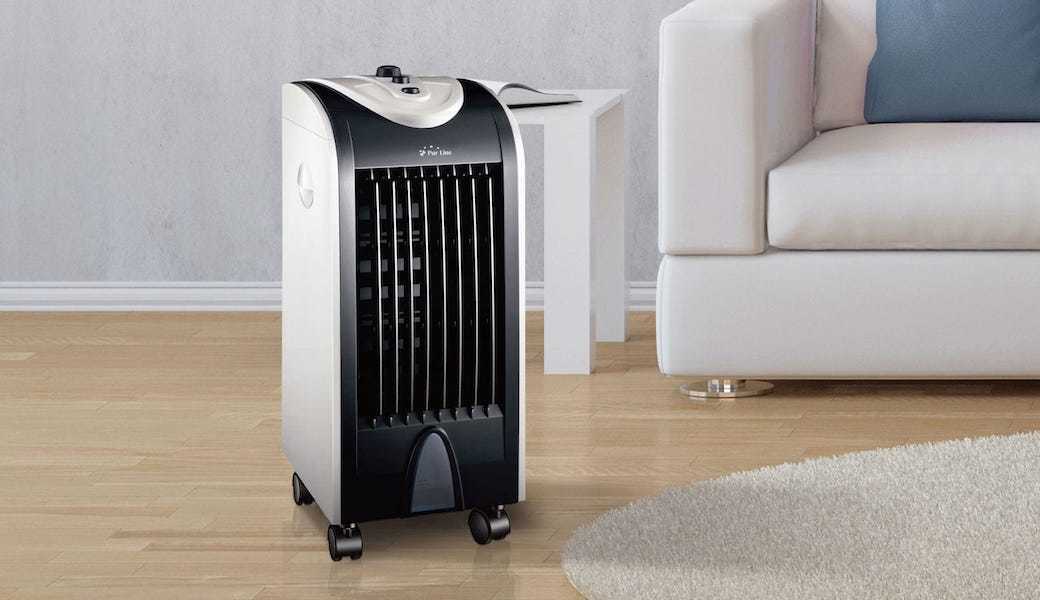 Air filters are an optional accessory rather than a standard feature on many evaporative coolers.

Q. How do I choose the right size evaporative cooler for my home?

A. When shopping, pay attention to the cubic feet per minute (CFM) rating for the cooler, the airflow that a cooler can move. It’s important when figuring out whether a particular unit will cool your entire living space or just a room. Most brands list the estimated square footage that a specific unit will be able to cool, but you can also figure out what you need. Measure the length and width of the room(s) to get the square footage of the area you want to cool, and multiply that by the height of the ceiling. Divide that number by two. The result is the cubic feet per minute you’ll need to cool the area.

Q. I’ve found that an evaporative cooler works well in the hottest part of the day but not so well at night or early in the morning. Is there a way to improve its cooling during these times?

A. In some areas, the humidity in the air varies, and it might be higher from late night through early morning. The effects of the evaporative cooler may not be as noticeable at these times. Some homeowners run an air conditioner when the humidity is higher. 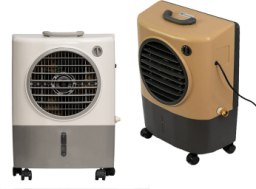 Best Bang for the Buck
Hessaire
MC18M Portable Evaporative Cooler
Bottom Line
An all-around model for at home indoors or on the patio; can attach to a hose for automatic filling.
Shop Now 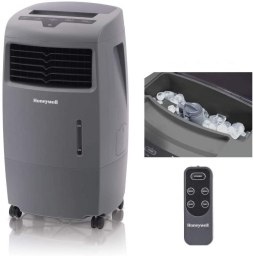 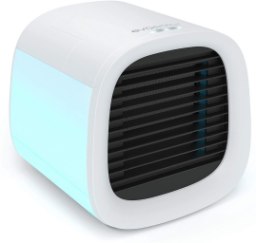 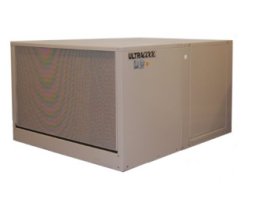 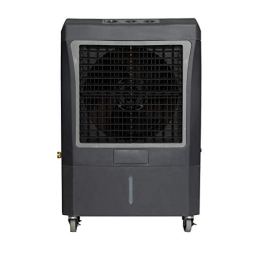 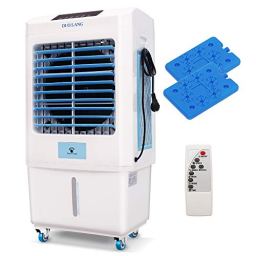