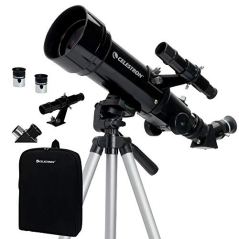 Users have complained about the sturdiness of the telescope's tripod. 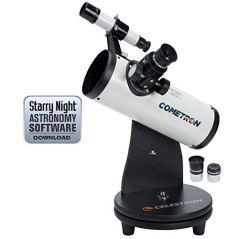 A lightweight tabletop telescope that doesn't require a lot of packing or unpacking. Simple to use and focus. Comes with a finderscope and two different eyepieces. Maximum magnification of about 120x. 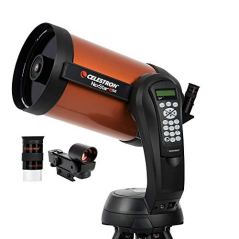 Large 8-inch aperture and crisp images. Fully automated telescope with database of over 40,000 celestial objects. Easy to set up and align. Up to 480x magnification. Sturdy tripod is easy to assemble and disassemble.

Expensive and heavy at 33 pounds. 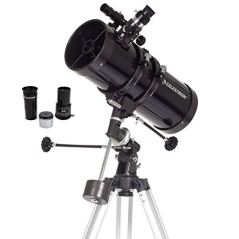 Aluminum tripod and accessories included. No tools required to set it up. Database with over 10,000 celestial objects. Up to 250x magnification. Good image quality for the price range.

Users have said the tripod isn't very sturdy and may tip over on a windy night. 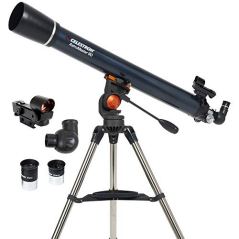 Includes a 10mm and 20mm eyepiece. Easy to set up. Good image quality for the price. Tripod is sturdy and built to last. Built-in accessory tray for storing eyepieces and other items.

It can be difficult to lock the telescope into place on the tripod.

Telescopes are the ultimate scientific hobbyist’s dream toy, and the California-based company Celestron has been making some of the best since 1964. Capable of collecting and magnifying light, a decent telescope can be a passport to visit everything from the craters of the moon and the rings of Saturn to the dim flickering of distant galaxies.

With such lofty abilities, it should come as no surprise that Celestron telescopes can also be a bit complicated and quite expensive. It’s important to know what you want a telescope to do and how much you should be paying for the features you need.

This guide will introduce you to some of the terms and features you should be concentrating on when shopping for a Celestron telescope. We will cover the various telescope price ranges you will find and what you should expect to see within those ranges. We will also point out some of our favorite Celestron telescopes — both in terms of abilities and price. 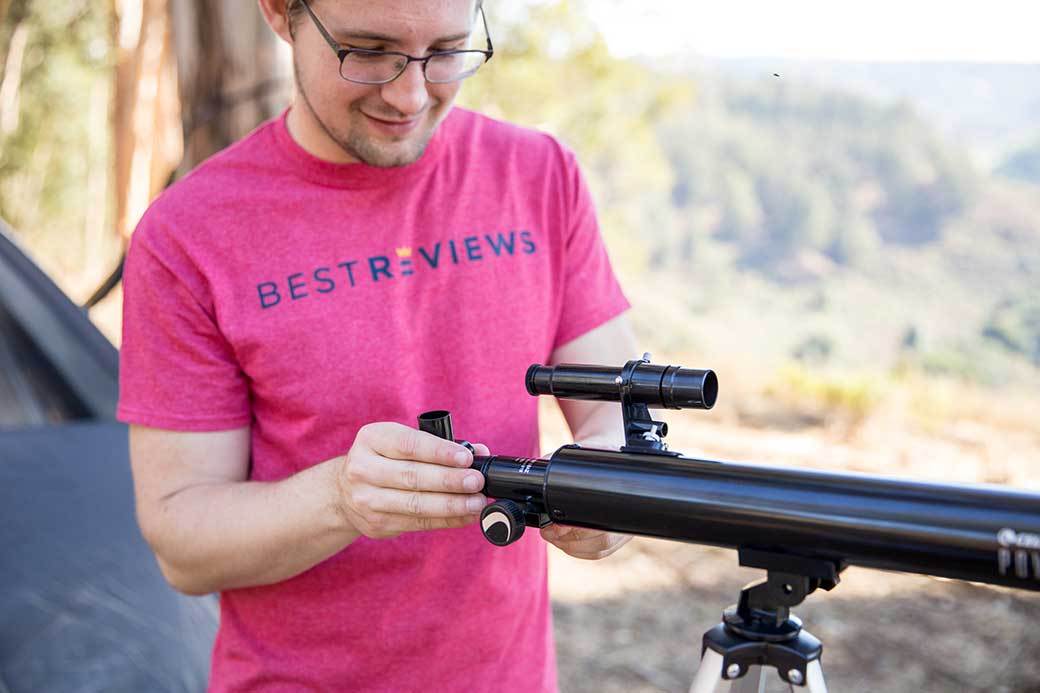 Longer focus eyepieces are generally easier to use for those who wear eyeglasses.

Telescopes ship in a variety of shapes and sizes, but one big consideration you will need to tackle early on is whether to buy a manual or a GoTo telescope.

As the name implies, manual telescopes are controlled by you. The telescope is manipulated through controls that you manually manipulate to scan the sky. While you can use sky charts and other sources to help you identify and observe planets and stars, you are largely on your own to find specific celestial objects. Manual telescopes can be found in Celestron’s AstroMaster and TravelScope series, which are designed for beginner astronomers.

GoTo telescopes are motorized, often depending on a database of celestial objects that the telescope will access for you. These databases range from a few thousand objects up to 40,000 or more, and once a GoTo is aligned, it will find and track these stored planets, individual stars, and even whole galaxies. These are great options for both beginners and more experienced astronomers.

Celestron offers a variety of GoTo telescopes, which are generally more expensive. The majority are battery-operated, although some have AC or even car adapter options. GoTo telescopes, such as their LCM models, are relatively inexpensive and geared towards beginners, while more expensive models such as those in the NexStar SE line, are for both beginners and more advanced users.

How easy is it to set up?

The majority of Celestron telescopes are easy to set up pretty much right out of the box, but actually finding something like a star that you can put a name on might be difficult. This is where a GoTo telescope can be a plus, although you will need to align a GoTo every time before using it. A manual telescope requires no alignment and should be easy enough to use for all ages.

How large is the telescope?

Celestron offers a range of telescope sizes, from lightweight tabletop models to full-featured GoTo telescopes with heavy mounts and steel tripods. While large telescopes tend to show more, they can also be heavy and more difficult to set up and use out in the field. Heavier telescopes can also be sturdier, however, which will almost always improve image quality.

Celestron telescopes can weigh from 10 pounds to 50 pounds or more. Know the size and weight of a telescope before placing your order.

Aperture size, or the diameter of the telescope’s primary lens or mirror,  is one of the prominent specifications that telescopes are rated on. Basically, the larger the aperture, the sharper and brighter the image will be. A larger aperture will also help you to observe fainter objects.

It will also run you more in terms of price. Celestron aperture sizes range from 3 inches up to 11 inches.

Magnification will vary by telescope, with the majority of Celestron telescopes offering from 120X to 480X.

Think of the finderscope as a low power pre-telescope. With a finderscope, you can more easily locate the objects you want to view, then use the regular telescope to focus in on the object.

While compact and simple in design, eyepieces are a crucial element of a quality telescope. Eyepieces help to magnify the image, allowing you to realize the highest image quality. They are made in a variety of sizes, and while it may seem counterintuitive, the higher the number (in millimeters), the lower the magnification power. A large number of Celestron telescopes ship with more than one eyepiece.

A Barlow lens is a special type of eyepiece add-on that will allow you to often double (2X) or triple (3X) the magnification. While this is not standard with all telescopes, some Celestron telescopes do ship with a Barlow lens.

The mount is the device that sits between the telescope and the tripod. This determines how the telescope moves. It also provides a shake-free viewing experience.

While primarily for larger telescopes, there are a number of different kinds of mounts. Some of the more common mounts offered by Celestron include:

A staple of all ground-based telescopes, the tripod can vary telescope to telescope. Some are made of lightweight aluminum, while others are built from a more durable steel; the majority of Celestron telescopes use a steel tripod. Any tripod you go with should be long-lasting and stable enough to protect the telescope from tipping over and keep it in a fixed position for image clarity.

If you plan to travel often with your telescope — or just wish to securely store it — check whether a telescope ships with a durable storage bag capable of holding all elements of the telescope. Some Celestron telescopes will include a storage bag or case, while others require you to purchase them separately.

Did you know?
With a solar filter, you can use your telescope to view the sun.
STAFF
BestReviews

Celestron telescopes can range in price from under $50 to well over $2000.

At under $50, you are usually limited to PowerSeeker telescopes. In general, Celestron telescopes under $100 are lower-powered models and may be portable or tabletop based. These telescopes won’t provide you with a ton of image clarity for close-up views of the outer planets, but you will still be able to manually find stars and observe a variety of moon features, planets, and other celestial objects.

In the $100 to $500 range, you will find more powerful manual telescopes, and the apertures will increase in size. This range also offers the lower-priced computerized telescopes, in addition to a variety of lower-priced refractor telescopes.

The $500 to $2,000 range is home to some of Celestron’s most popular telescopes, including a number of GoTo telescopes that offer extensive databases and larger apertures. Finally, anything over $2,000 is generally for serious amateur astronomers. These telescopes include astrograph telescopes and larger than 8-inch-aperture GoTo telescopes. 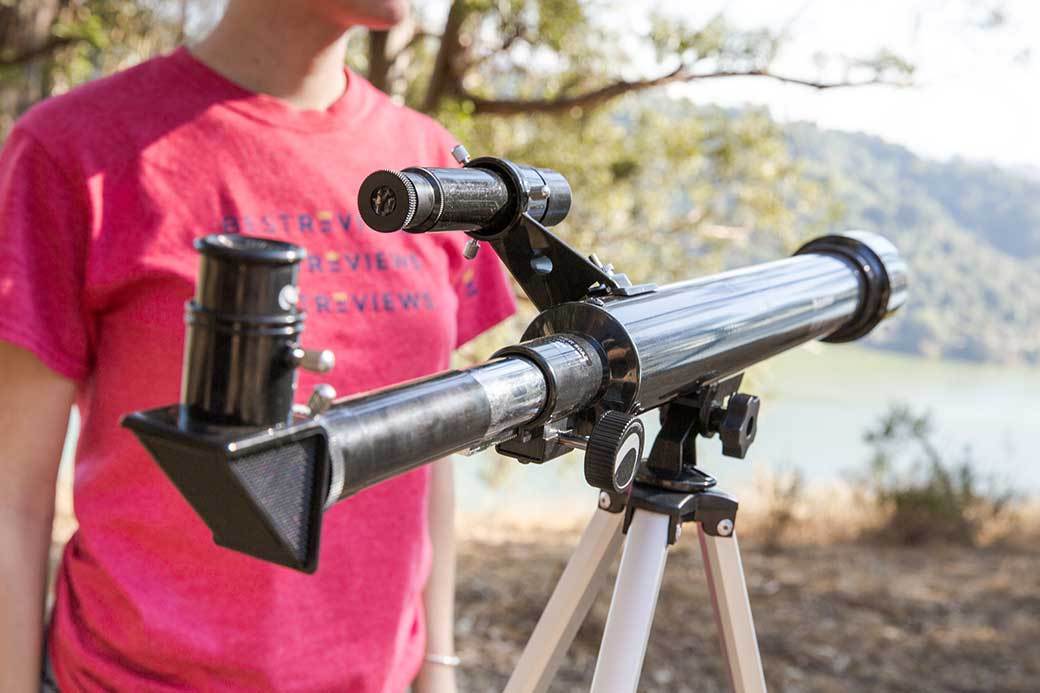 Be sure to register your Celestron telescope. Registering is important if you ever need to take advantage of Celestron’s warranty, and it will also keep you up-to-date on any product updates.

Q. What is the difference between a reflector and a refractor telescope?A. These are the two primary types of telescopes, and they do vary quite a bit from each other. A reflector telescope uses mirrors and is usually better for viewing deep-sky objects. If you are searching for a larger telescope for less money, a reflector is your best bet.

A refractor telescope uses lenses instead of mirrors and is a better choice for viewing the moon and planets. These are maintenance-free and great for beginners, but they can be expensive if you want a larger telescope.

Q. Do these telescopes ship with software of any kind?
A.
The majority of Celestron telescopes do offer some form of downloadable software (such as the Starry Night Basic Edition) or an app (SkyPortal) to use with your telescope. These can help you easily find celestial objects and learn about them. SkyPortal can also be used with your smartphone to control some telescopes.

Q. Can you take pictures with these telescopes?
A. By themselves, these telescopes rarely can take photos, but you can often purchase adapters that can be used with your DSLR camera to photograph what you are observing. While expensive, Celestron also sells a variety of astrograph telescopes that will yield better results than using a DSLR with an adapter.

This activity is popular enough to have its own name — astrophotography — and while difficult to master, it can be a rewarding element of your telescope experience. There are a number of websites dedicated to getting started in astrophotography and excelling at it. 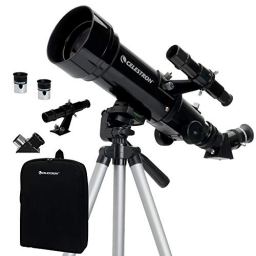 Best of the Best
Celestron
70 mm Travel Telescope
Bottom Line
This is your best bet if you like to stargaze from different locations and you're looking for something that's easily portable.
Shop Now 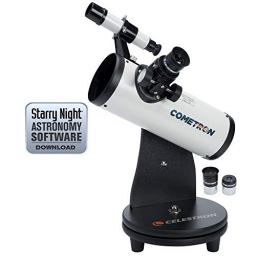 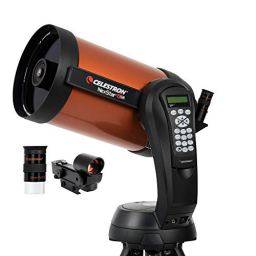 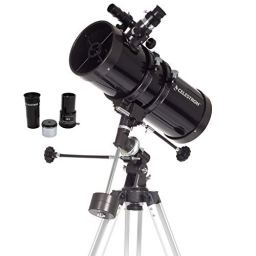 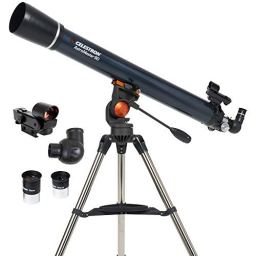 Top Pick
Celestron
AstroMaster 90 AZ Refractor Telescope
Bottom Line
Consider this model if you're looking for a simple telescope that you can just point and view without having to bother too much with focusing.
Shop Now