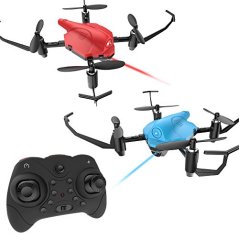 A fun duo for kids who like drones and competitive play. Despite a few quirks, these drones have some impressive capabilities.

A pair of drones that shoot infrared beams for exciting battle play. Three speed modes make them suitable for novices as well as somewhat experienced drone operators. Drones get good altitude considering the price and size.

Some durability and longevity concerns, as the components are prone to breaking with rough play. 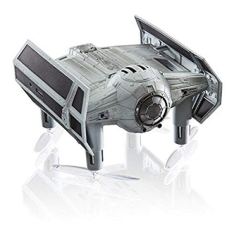 This Tie Advanced drone brings Star Wars battles to life with a true-to-film look and the lasers to match.

A high-performance drone that looks ripped from the movies. Can achieve speeds up to 35 mph. Programmed with several aerial stunts. Can engage in aerial laser battles with other Propel Star Wars drones. App features unique training missions.

More difficult to fly than other drones. Instructions could be better. 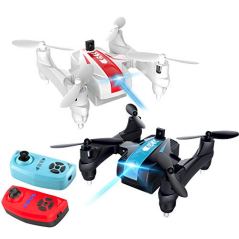 Lots of fun for younger kids thanks to easier controls and automated functions, though flight time is very short.

Flying time is only 5-6 minutes on a battery charge. 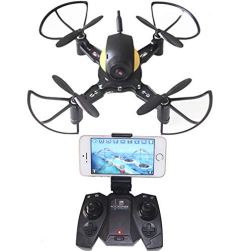 A build-it-yourself battle drone kit adds to the challenge and fun of the sport.

Great for STEM clubs and kids who want a kit-build drone set. Extra battery allows action to continue while recharging the first. Built-in camera. Drones can be controlled with 2.4 GHz controller or a smartphone app.

Drones can be tricky to build, and instructions need improvement.

A sturdy, easy-to-fly drone set that won't break the bank, making it a perfect choice for beginners.

A set of two drones that are ready to battle out of the box. Quadcopters have a durable prop guard to resist damage. Easy to fly with intuitive remote and one-touch attack moves. Melee weapons can be customized.

Battle drones are among the hottest toys on the market thanks to their thrilling, real-life action. These drones take the thrills to the sky and use hooks, spears, and other weapons to do aerial battle. The goal is to rack up points by scoring hits or simply knocking your enemy out of the sky. More advanced models even use infrared lights to score “hits.”

Battle drones can be used in several ways for people of different experience levels, ranging from one-on-one skirmishes to expansive, multi-drone melees. Drones can look wildly different as well, equipping different weapons and aesthetic flourishes, with some being inspired by vehicles from movies and TV.

Before you click “buy,” though, let’s dive into the designs, price ranges, and features that make battle drones special. If you’re looking for inspiration, don’t forget to check out our favorite battle drones, which are spotlighted on this page. 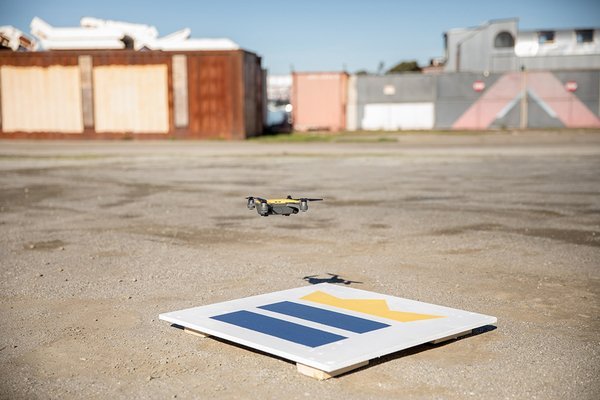 Battle drones may be small, but they still must abide by FAA guidelines when flown outdoors. Some of these guidelines include no flying near military bases, airports, national parks, and government buildings. The operator must also keep their drone in visual range. Height and speed restrictions apply, but battle drones rarely exceed them.

The typical workday of a conventional drone might involve hovering for a perfect photo or delivering a small package to a residence. Battle drones, however, are constantly slamming into each other and the ground, so build quality is paramount.

The most important component to inspect are the props and prop guards, because if they go, the drone will no longer fly. Battle drones may be small and lightweight, but these parts should still be thick enough to sustain multiple impacts.

The range of your drone determines how epic and far-reaching your battles can be. It may not be as important here as it is for a surveillance or research drone, but it’s still a factor to consider. Also, battle drones are often capable of mounting cameras, expanding their utility into other areas.

Range is determined by the strength of the drone’s radio transmitters and how much battery life it has. The number can vary from around 40 feet to well over 200 feet.

Compared to photography or exploration drones, battle drone battery life is quite short. This is partially because battle drones are meant to be lightweight and nimble. Average battery life is generally between 5 and 12 minutes per charge, but some high-end models can go longer.

A huge part of a battle drone’s character, of course, is the way it does battle. This comes down to the “weapons” it equips, which are either designed to knock the weapons off enemy drones or take them down altogether. These weapons generally take the form of melee tools like hooks, saws, and spikes.

Some models do battle a bit differently, using infrared lights and sensors to fight in a more “civilized” way. With these battle drones, you simply line up your shots and fire via the remote control. Certain varieties even automatically disengage and land once they’ve received a preset number of hits (typically four), guaranteeing that the winner is crowned fairly. 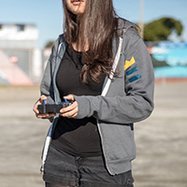 Did You Know?
Battle drones are loads of fun, but they have tangible benefits, too. They can help develop or strengthen hand-eye coordination as well as depth perception. In addition, flying a drone may foster an interest in aviation in young people.
Staff
BestReviews

Winning a battle drone skirmish isn’t just about weapons. Outflying your opponent can put you in a better position to strike, defend, and maneuver, but it isn’t always easy. Thankfully, battle drones often come with piloting assistance features.

One common aid is “headless mode,” which allows your drone to remember the direction from which it took off. Regardless of how the drone is rotated in the air, left will always be left and right will always be right, in orientation with the pilot. This is a great tool for beginners, but even experts laud it for its smoothness and simplicity.

Also known as stunts, programmed attack moves can take your combat fluidity to the next level. These pre-programmed maneuvers allow you to execute strikes and dodges with single buttons rather than pitching, diving, and rolling manually.

Some examples include the following:

Spin attack: This move spins the frame of your battle drone in a saw-like motion, allowing you to deflect incoming attacks and bash into nearby enemies.

Tornado attack: This is a similar maneuver to the spin attack, but it moves your drone upward in a cyclone motion. Perfect for sneak attacks from below!

Circle attack: This maneuver automatically swings your drone in a wide circle to throw off other drones and set up powerful counterattacks.

If you’d like to document your battles from a thrilling first-person perspective, consider a drone with a camera mount. These permit you to attach a GoPro or similar camera to your rig to capture the action. Bonus points for camera mounts with shock absorbers and gimbals that allow your camera to turn. Some models even have built-in cameras that automatically send footage to your mobile device.

Battle drones require a lot of accessories, including remotes, extra batteries, extra propellers, detachable weapons, and camera goodies. A storage case helps you store and organize these parts, meaning you can spend less time searching for gear and more time in the air. A hard case is a great investment because it can keep your kit safe, even if it’s dropped.

Never underestimate the benefits of one-on-one instruction. Even though battle drones are considered toys, tips and guidance from an experienced drone operator can help develop healthy flying habits and give you a helpful head start.

Inexpensive: For $20 to $40, you’ll find smaller, simplistic battle drones with battery life to match. You’ll likely get five to six minutes of flight time before needing to recharge. These battle drones will be mostly devoid of flight assistant aids, complex weapons, and high-end features.

Mid-range: For $50 to $80, you will enjoy 10 minutes or more of battery life. The drones may be physically larger and boast programmed attack moves, fight assistance, and designs inspired by famous vehicles from movies and TV.

Expensive: Spend $80 to $100 or more, and you’ll enjoy the most powerful and feature-packed battle drones available. These often include infrared weapons and sensors instead of plastic melee options, and sometimes, they even include integrated cameras. You might also find battle drone two-packs in this segment, allowing you to start the festivities right away. 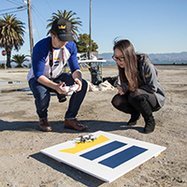 Did You Know?
Battle drones can offer unique connectivity features built into proprietary apps. Some allow you to link up and play interactive games with other flyers. Others utilize augmented reality tech to create cinematic flying footage, transforming open sky into futuristic space settings for mind-blowing recordings.
Staff
BestReviews 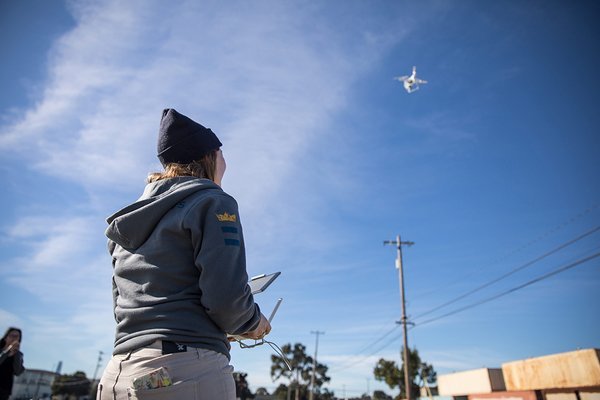 Weather can dramatically impact your drone-flying experience. Before setting out, check your local resources to see if high winds, rain, or hail are on the way.

Q. Do I have to register my battle drone with the Federal Aviation Administration (FAA)?

A. Thoroughly read the packaging and instruction manual for your battle drone. This literature should tell you if you need to register your drone with the FAA or not. In general, small toy-size drones that are flown indoors do not require official registration, but it never hurts to be extra cautious. Laws and regulations may vary depending on location as well, so research your local ordinances to avoid any mishaps.

Q. Are battle drones easy to set up?

A. Battle drones are often set up and ready to fly out of the box, designated by an “RTF” label. In these cases, the battery might not be fully charged, but the unit’s components will all be in the correct spots for flight. Simply pair the drone to its remote, and you’re good to go.

Some battle drones are slightly more complex. In these cases, you'll need to attach different weapons to the drone or install the propellers. Thankfully, these usually snap into place with no tools required. Battle drones with cameras, mobile apps, and other advanced features could require more setup time.

A. When used by younger kids, we recommend battle drones be used under adult supervision in a safe area. Battle drones can move quickly, and they often utilize sharp parts to combat other drones. Many models are specifically designed for kids, though, with simple controls, lower speeds, and less dramatic weaponry. 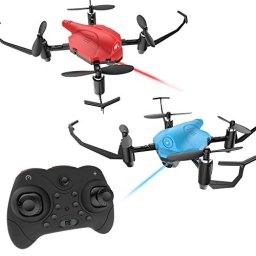 Best of the Best
Holy Stone
RC Battle Drones
Bottom Line
A fun duo for kids who like drones and competitive play. Despite a few quirks, these drones have some impressive capabilities.
Shop Now 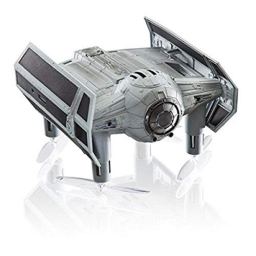 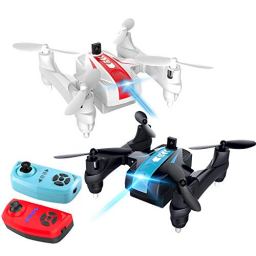 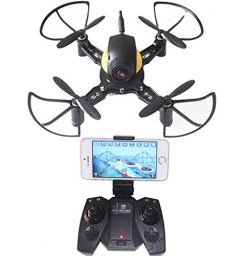 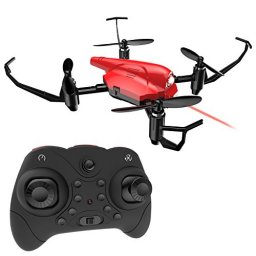 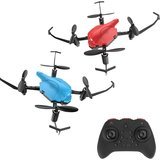