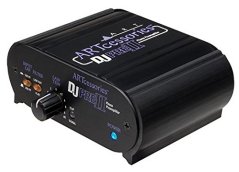 A terrific preamplifier that acts as an interface between your turntable and your audio recording and playback system.

Offers front gain trim control and a signal or clip LED that allows you to optimize the preamplifier's gain for a wide range of input sources. Includes a switchable low-cut rumble filter. Boasts a heavy-duty extruded chassis. Comes with built-in low-noise phono preamp circuitry that precisely conforms to the RIAA standard.

May emit a low-frequency humming noise. Does not include a power switch. 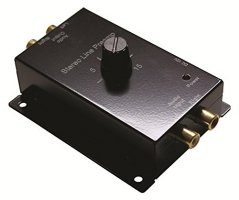 Not all channels work consistently. May send a hissing sound through speakers. 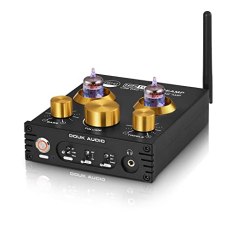 While its wireless connectivity can be hit-or-miss, this preamplifier features great tube sound in an attractive package.

Has a pair of vacuum tubes for a retro tube sound. Sports an attractive design with the ability to switch between blue and orange tube lighting. Input options include RCA, USB, and Bluetooth. Ships with power cord, USB cable, and Bluetooth antenna. Volume and separate bass/treble controls included. 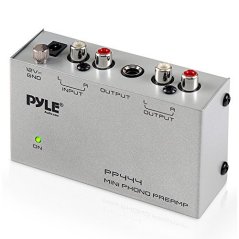 An affordable solution for those searching for a turntable preamplifier, although the lack of controls may turn off some.

Converts phono signals into line level signals. Simple design with RCA inputs and outputs. Easy to use. Works with magnetic pickups. Has a grounding post for attaching a turntable grounding wire.

No controls, so you have no way to adjust the output. Some hum/line noise complaints.

A lightweight and compact tube preamplifier that is easy to use.

This component has a 3.5mm AUX input and three switchable gain modes that allow versatility for combination with other products. This is also fitted for moving-magnet (MM) cartridges.

Has a somewhat difficult installation process.

Are you thinking of picking up a preamplifier for your audio system? The first time you hear it powered up, we think you’ll be glad you did.

As the name implies, a preamplifier is a device that you place in your audio chain prior to the amplifier. It is here that the preamplifier helps shape and define the audio signal. It can also amplify a weak signal.

Though the purpose of a preamplifier may seem simple, the end result can make a strong difference in the overall audio quality of your sound output. But preamps aren’t cheap, so you certainly want to do your homework before buying one. 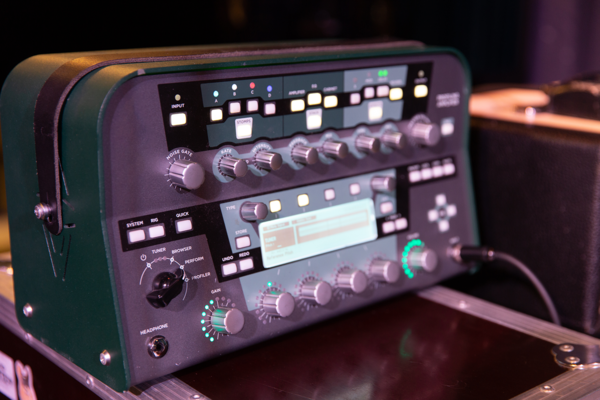 A preamplifier generally does not have enough power to drive speakers on its own. Rather, it must be plugged into an amplifier to work.

Preamplifiers are available in three configurations based on circuit design. There are some fundamental differences between the three that may impact your choice.

Tube preamplifiers: Tube preamplifiers use vacuum, or thermionic, tubes to create their unique sound. This is an old-school option that users love for its vintage color: crisp highs, a deeper bass, and overall warmth to the sound. Some tube amplifiers feature completely enclosed tubes; others have tubes extending from the top of the chassis. In addition to costing more than other preamplifier options, tube amplifiers produce more heat than other circuit types.

While some preamplifiers work with multiple sources, others work best with a specific type of source, such as a phonograph. Other sources can include a computer, instrument, microphone, iPod, TV, Echo Dot, or another audio device.

If you plan to put a preamplifier to a specific use, check the product specs carefully to verify that the preamplifier will meet your needs.

Preamplifiers are typically powered via a 12V DC adapter, but some also run on battery power. This is a big plus when outlets are scarce. Be sure that any preamplifier you purchase ships with the adapter.

The majority of preamplifiers ship pre-assembled, but some require assembly. While this is typically not that involved, people who are adverse to assembling such devices should take note.

The outer casing of a preamplifier is usually made of plastic or metal. Metal is more durable, physically protecting the inner circuitry of the preamplifier better than plastic. Metal also has the advantage of offering better shielding from electromagnetic interference and vibrations.

Preamplifier inputs allow you to plug sources such as a computer or turntable into the preamplifier. RCA-type inputs are standard, but some preamplifiers offer other input options, such as USB or Bluetooth. Some preamplifiers feature source switching so you can easily switch between audio sources.

Controls vary from one preamplifier to the next, but some common ones include the following.

Volume and gain: These controls allow you to modify how loud a signal is when leaving the outputs (volume) or entering the preamplifier through the inputs (gain).

Tone: This control affects how much treble or bass is in the signal.

Balance: In stereo preamplifiers, the balance control gives you fine control over how much signal reaches each speaker.

As mentioned, some preamplifiers include a control for switching between sources.

Also known as a low-cut filter, a high-pass filter is available in some preamplifiers. It enhances the signal by allowing high frequencies through while filtering out low frequencies. This is particularly helpful in removing bass in systems with speakers that are less robust. 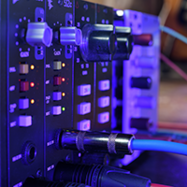 Inexpensive: For $20 to $45, you will find simple preamplifiers for use with a turntable or headphones. These tend to have simple RCA inputs and outputs and minimal controls.

Mid-range: Between $45 and $70, you will find more input/output options along with more controls so you can fine-tune your signal. These preamplifiers can typically be used with a variety of sources and are best for home theater or audio fans who want to improve their overall audio quality. Some simpler tube preamplifiers are also available in this price range.

Expensive: Anything over $70 is a more serious preamplifier. Geared toward audiophiles and music professionals, preamplifiers in this range offer full-featured control of your audio signal with a variety of input types and source switching to handle all of your audio sources in one hub-type component. Tube preamplifiers are common in this price range, as are a variety of control options. If you’re searching for the best signal quality with no hum or background noise, this is the price range for you.

While rare, some preamplifiers are hybrids that allow you to easily switch between a tube and solid state design. 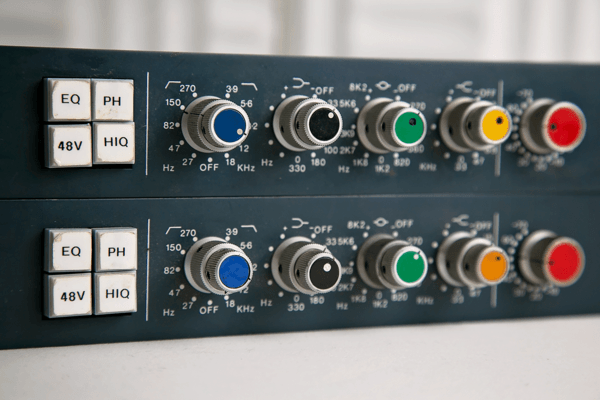 Preamplifiers are usually fairly compact, but if space is an issue, you should still note the size of one before purchasing it.

Q. If I already have a mixer or audio interface, do I really need a preamplifier?

A. While mixers and audio interfaces often incorporate preamplifier elements within them, the quality of such preamplifiers will be poor compared to what you would get with a dedicated external preamplifier. To coax the best possible sound quality, consider picking up a dedicated preamplifier.

Q. What is audio clipping?

A. Clipping refers to an overdriven signal that can result in a distorted wavelength, leading to poor signal quality. You can usually fix this in a preamplifier by adjusting the gain down. Some preamplifiers include an LED light that alerts you to clipping so you’ll automatically know when to adjust the gain.

Q. What is an analog input capacitance switch, and how do I use it?

A. Analog input capacitance switches are included with some preamps, particularly those designed for use with turntables. This switch allows you to change the capacitance, usually from 100pF to 200pF, to better work with your turntable. 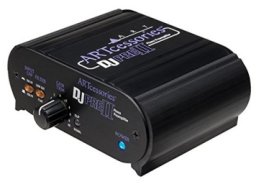 Best of the Best
ART
Preamplifier
Bottom Line
A terrific preamplifier that acts as an interface between your turntable and your audio recording and playback system.
Shop Now 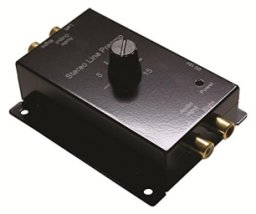 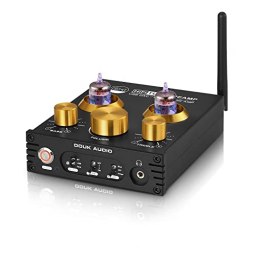 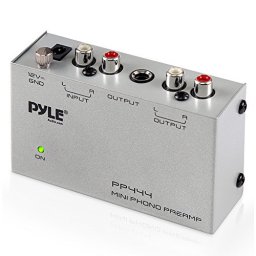 Top Pick
Pyle
Phono Turntable Preamplifier
Bottom Line
An affordable solution for those searching for a turntable preamplifier, although the lack of controls may turn off some.
Shop Now 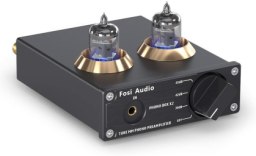 Top Pick
Fosi Audio
Phono Preamp for Turntable
Bottom Line
A lightweight and compact tube preamplifier that is easy to use.
Shop Now 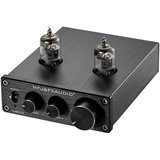 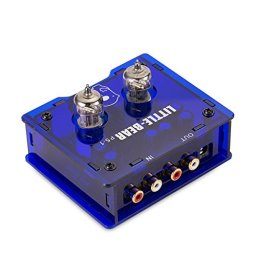