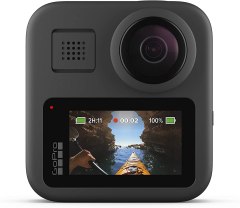 Captures breathtaking 5.6K photos and impressive videos, and it is so simple to use, anyone can create magic with it.

Also captures both regular images. Professional-grade stabilization. A total of 6 mics capture immersive audio. Easy to learn and use. Has 4 digital lenses in standard mode. Takes excellent panoramic photos. Can livestream in 1080.

This cute palm-sized model packs a couple of expert features into a fun, colorful unit.

Wireless connection to phones can be poor. App can be clumsy. 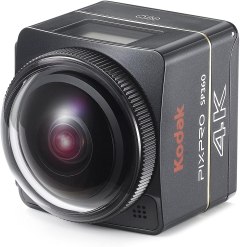 Easy to use, fairly affordable, and takes quality videos and is bundled with a wide range of useful accessories.

Smart stabilization and processing and a number of clever features.

Captures up to 5.7K resolution. IPX8 waterproof to 10 meters for capturing images in and near water. Offers onboard software stabilization and leveling for smooth, steady images. Provides 4 mic audio capture.

Cited issues among some users with connecting to Android phones. 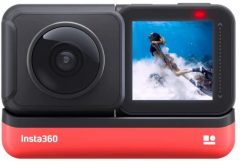 This rival to other sports and action-oriented models boasts powerful effects and image processing.

Omnidirectional, or 360°, cameras have quickly become hugely popular for both business and personal use. They give real estate agents an attractive way to display properties, allowing them to easily produce 3D walk-throughs they can post online. The cameras offer similar benefits for construction companies. They bring vibrant realism to outdoor activities, whether you’re jumping out of an airplane or diving underwater, and they offer amateur and professional filmmakers a whole new world of creativity.

If you’re thinking about getting a 360° camera, you have an enormous choice, but with all the different resolutions, frame rates, image production, and post-processing options, plus a bunch of associated jargon, picking the right model isn’t straightforward. 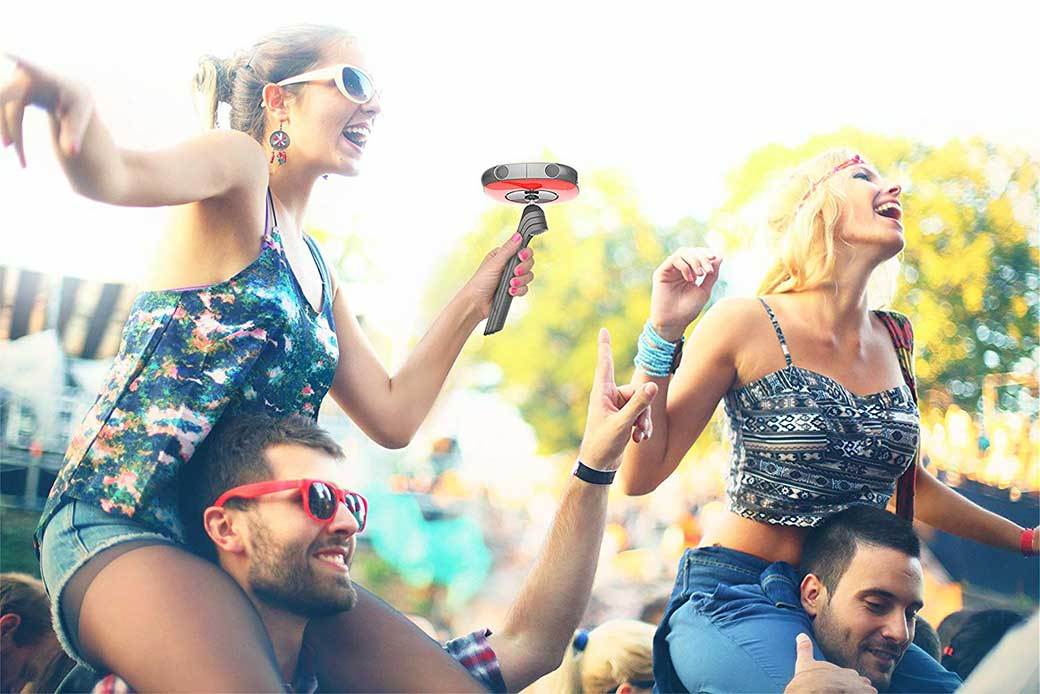 Few 360° cameras have their own screen. Most link to a phone or tablet. Some features may only be available for particular operating systems, so check device compatibility carefully.

In terms of resolution, 4K is pretty impressive in standard video, but when you’ve got a “whole world” view, those pixels have to go a lot farther. It’s still good, but it isn’t as crisp by comparison. Entry-level 360° cameras might only be 2K, which are perhaps best looked at as cheap fun. There are several more steps in quality, starting at around 5.5K. This is a noticeable improvement over 4K, but you need to spend more to get it. High resolution for these devices equates to 8K or 12K, which provides fabulous images if you can afford it.

The minimum for flicker-free playback is about 30 frames per second (fps). Some cameras offer lower rates to reduce file sizes, and this can be a useful option in situations where you’re simply recording factual information. For super-smooth imaging, look for frame rates of 50 fps and more.

Most 360° cameras have two lenses and some have four. To provide you with a seamless video, those images have to be “stitched” together. Most devices offer the option of doing it via an app or desktop computer software. Apps are quick, but the seam can be more visible. Computer programs usually offer more extensive features and may produce higher resolution output. It’s an area that’s worth spending some time to check out thoroughly. If you’re looking at the creative angle, you’ll also want to look at third-party post-processing software.

It’s common for 360° cameras to have anywhere from two to four built-in microphones, thus capturing sound that goes with the video rather than from a single source. The quality is reasonable, but it’s not up to professional standards. If that’s what you need, look for a camera that offers external audio connectivity.

There are numerous ways to share your 360° videos. Output can usually be uploaded to social media websites for friends and family anywhere in the world to see. How this is done varies, and some devices make it easier than others. Frequent users, particularly vloggers, will want to investigate this further.

These are memory-hungry devices, so memory cards are pretty much a must-have. Some come with one supplied, but most do not. Capacity starts at 32 GB, but the more you can afford the better, though be sure to check the maximum size that the camera can take, because not all accept the largest 256 GB cards. Card type is also important. There’s more than one kind of microSD card.

Filming duration depends on battery life as well as the amount of memory. Most 360° cameras run from 30 minutes to an hour or more on a charge, so it shouldn’t be a problem. That said, it’s going to be really frustrating if you’re halfway through recording and your battery goes flat, so you need to know exactly how long your battery will last. You can carry a spare, but on some devices, access can be more complicated than you might expect. Also, manufacturers tend to give run times as a best-case scenario. It’s worth checking online owner feedback for real-world expectations.

You can also take still images with 360° cameras. These are usually wide-angle or panoramic views of 180° or more. Resolution can be anywhere from 16 MP up, with the highest we’ve seen at 66 MP! Many are also capable of outputting “tiny planets”: the full 360-degree view wrapped around to form a globe in a flat plane. These images, particularly cityscapes, can be fascinating.

Size: Physical size varies from those that fit easily in the palm of your hand or pocket to large professional models.

Protection: If you’re using a camera for adventure or sports, you’ll want one with a rugged case and some kind of weatherproofing. Some are simply showerproof, but 360° action cams can be waterproof to 15 feet or more.

Mount: You might also want to fix it to a helmet, handlebars, shoulder rig, or another device. Many have a standard 1/4-inch tripod-type mounting hole, and some come with mounting kits, but by no means all of them do.

Selfie stick tripod: UBeesize Tripod Stand
Although at first glance this appears to be for phones, it has a universal 1/4-inch mount for your 360° camera, too. A compact 17.4 inches when folded, it extends to 51 inches, more than many rivals. Use as a selfie stick or as a tripod for absolute video stability.

VR headset: Benext Universal Virtual Reality Goggles
If you want the full immersive experience of 360°, this low-cost VR headset is ideal. It’s compatible with a huge range of iPhone and Android models from 4 to 6.3 inches, is comfortable to wear, and offers multiple adjustments so you get the best possible picture. It also supports numerous drones.

"Choose a 360° camera with live-streaming capabilities, and you can hook into social media sites to share your activities with everyone all over the world!"
STAFF
BestReviews

Inexpensive: The cheapest 360° cameras can be found for under $100. As a low cost introduction to 360° video they are quite popular, but many customers are disappointed with the image quality. Durability can also be an issue, and these cameras seldom offer any water resistance.

Mid-range: Reasonable-quality 4K 360° cameras start at a little under $200, and you’ll find lots of feature-rich models between that and $400. A lot of people can find what they’re looking for in this price bracket. 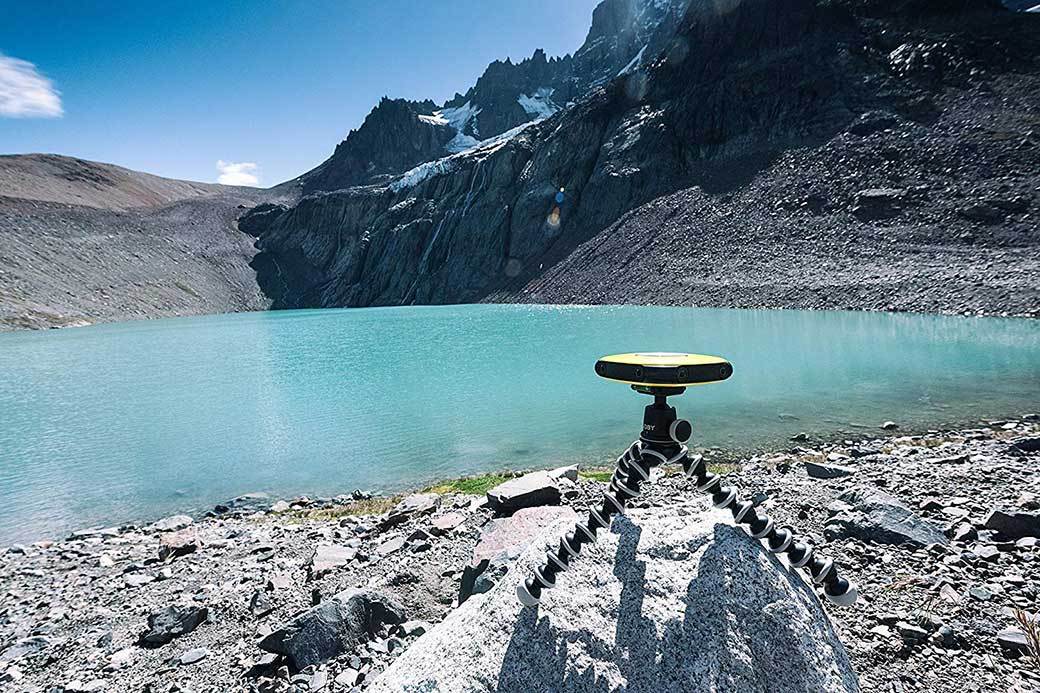 Although many of these cameras shoot at least 4K video, you won’t get the same detail as with standard video because those pixels are now spread across a much larger 360° image area.

Q. Are 360° videos the same as virtual reality (VR)?
A.
You can view 360° videos on a number of VR headsets, but there are differences in the creation process. With 360° video, while you may be able to see all around, the device itself is always at the center of the recording. VR is more interactive, frequently offering multiple changes of viewpoint, and it is mostly created using CGI.


Q. How do I know if my 360° camera is fully waterproof?
A. The independent Ingress Protection (IP) testing system is used by some manufacturers. Devices are given an IP or IPX rating, and you can check specific details online. However, many brands don’t bother, so really you’re taking their word for it. Chances are, top names are trustworthy, though phrases like “showerproof” aren’t much use. If a camera is designed for underwater use, you’re probably fine. We’d be more cautious with cheap models from no-name brands.


Q. Which SD card is best for a 360° camera?
A. It’s not a question of “best.” It’s a question of suitability. You need to be careful because type, size, and speed vary from one camera to another. Most use microSD, but there are two types: SDHC and SDXC. You need the right speed class, too. Additionally, while card sizes run from 32 GB to 256 GB, some cameras only take a maximum of 128 GB. Double-check specifications before ordering. 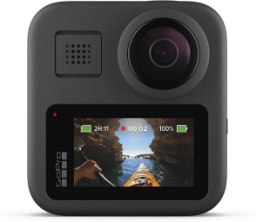 Best of the Best
GoPro
GoPro MAX
Bottom Line
Captures breathtaking 5.6K photos and impressive videos, and it is so simple to use, anyone can create magic with it.
Shop Now 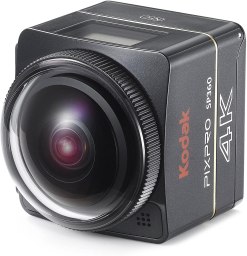 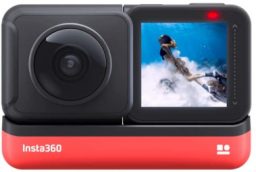 Top Pick
Vuze
3D 360° 4K VR Camera
Bottom Line
If you need an easy-to-use camera that takes top-tier 360° video while meticulously capturing the finest details - and money is no object - the Vuse 3D 360 4K VR video camera should be on your radar.
Shop Now 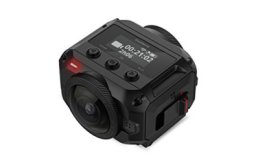 Top Pick
Garmin
VIRB 360° Camera
Bottom Line
Between the rugged construction, incredibly user-friendly design, and dazzlingly impressive recording quality, Garmin’s VIRB 360° camera has it all, and if it’s in your budget, we wholeheartedly recommend it.
Shop Now 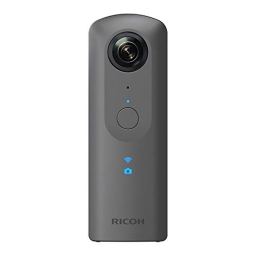