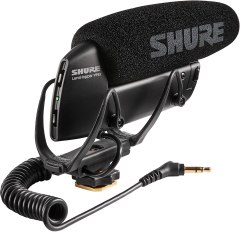 Fails to eliminate noises from behind the camera. Does not fare well as a true shotgun microphone. 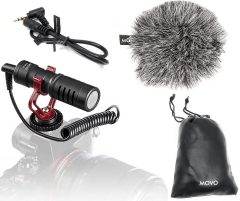 A solid shotgun cardioid mic for your camera or headphone-jack-equipped device.

Not ideal for capturing ambient sounds. Windscreen may shed. 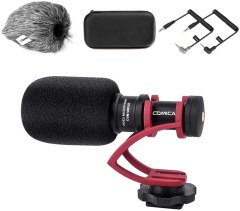 An excellent all-around camera microphone with plenty of professional touches, including a silicone shock mount.

Audio balancing issues have been reported when used with older iPhones. 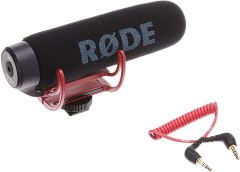 A super camera microphone that offers the best sound recording quality for interior and outside use.

Small and lightweight for mobile use. Powered from the camera itself, eliminating the need for a battery. Integrated shock mount does a good job of reducing vibrations.

Included windscreen can often come loose or fall off of the microphone. 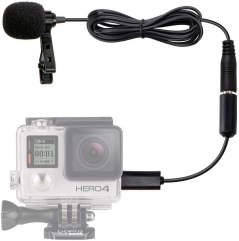 Small clip-on design mounts discretely on a single individual. Does a good job of picking up speech in loud or outdoor settings. Convenient to store and carry around.

Microphone can be difficult to use when connected to a camera. No wireless capability.

To casual users, a camera microphone may seem like an extravagant expense, but videographers looking to step up their game know that the first and best investment they can make in auxiliary equipment is an external camera microphone.

On-camera microphones often pick up all sounds equally, making dialogue difficult to pick up over background noise. The right camera microphone makes a huge difference in the quality of a video because it gives users more control of the audio. With a separate camera and microphone, you can hear narration clearly while background noises are filtered out. Conversely, videographers can get up-close audio several feet away from the camera itself — imagine recording the sound of buzzing honeybees while capturing video from a faraway, unobtrusive spot.

Choosing the right camera microphone can make or break a video, but don’t worry — the key to making the correct choice lies in knowing what sounds you want to capture and what noises you want to block out. 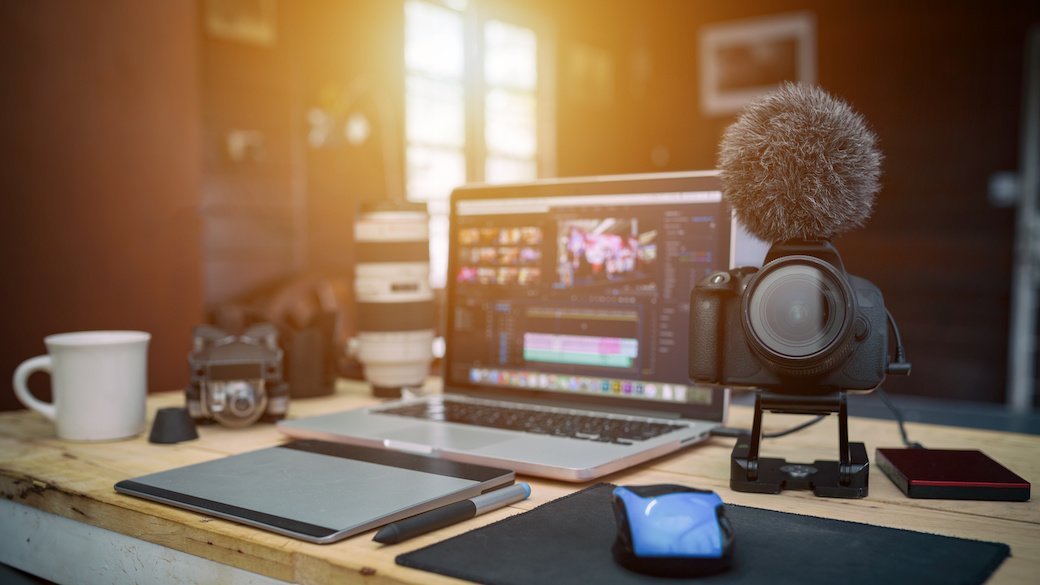 Handheld microphones lend an air of authority in certain types of video such as newscasts but can seem out of place in videos meant to be more casual or inviting.

Camera microphones can vary in shape and size, but they fall within a few common types:

Also known as lavalier microphones, these small mics are designed to clip to the lapel of a blazer or the collar of a shirt so they are as close to the speaker’s mouth as possible. When used properly, they will pick up the speaker’s voice over other sounds, including other voices. Lapel mics are excellent for picking up sounds close-up, but they are not so great at picking up deeper tones or sounds from more than a couple of feet away.

Still in use by on-camera news reporters and boxing ring emcees, handheld microphones can pick up a wider range of sounds and richer tones overall. They are omnidirectional, meaning they can pick up sounds from several feet away, so speakers need to keep this mic close to their mouth to avoid being drowned out by surrounding noise.

These larger and uniquely shaped (often oblong or bullet-shaped) microphones are cardioid, meaning that they will pick up sounds from the direction in which they are pointed. Boom microphones — those big oblong mics that boom operators extend over movie actors — fall into this class. Several sizes and subtypes exist, including shotgun mics that mount to the top of a camera.

A camera microphone can be a useful addition to your video recording equipment that makes you look more professional and improves your overall video quality. Still, you need to consider a few factors.

The bigger the microphone, the more cumbersome your video kit becomes. Videographers who have to travel frequently for their projects may find a large boom-style mic to be very awkward and annoying to carry.

You will need to be able to connect the microphone to your recording equipment. While this seems like a no-brainer, not all video equipment (including smartphones) has the correct input ports for certain microphone models.

Not all camera microphones work with other devices like smartphones or laptops. Always double-check the specs to find out which devices a microphone will interface with and whether extra software or apps are required.

Richer audio can take a lot more space on a data storage device. Make sure you have enough capacity to store video and high-quality audio.

Making a case for a microphone

Figuring out how an item will be used can be helpful when choosing a camera microphone because it will help you determine which microphone features are the most crucial.

Consider these questions: How often do you use your camera to record interviews or speak directly to an audience? Do you like to bring ambient sound from your surroundings into the final video? Do you want to record rich vocal tones or pick up the full range of a musical performance? Or do you need to do a little bit of everything?

You may need only one type of camera microphone, or you may need to purchase more than one to meet multiple needs. For example, to film in a lively street market where you want to speak on-camera and have a background of natural sounds, you can use a lapel microphone to pick up your voice and use a shotgun mic to record the sounds of the market.

Did you know?
A “polar pattern” refers to the sensitivity of the microphone to sounds at different angles. For example, an omnidirectional microphone has a polar pattern of 360º.
STAFF
BestReviews

All microphones have the core components that make sound recording possible — a protective metal mesh cover, an internal windscreen, a diaphragm that vibrates in response to sound waves, a capsule where sound waves are converted to electrical impulses, the outer casing known as the body, and an output cable. Beyond that common ground, a myriad of features and configurations bring all sorts of options to users.

Drop-resistant casing: This is a sturdy body that keeps internal microphone components from breaking or detaching if the microphone is dropped.

Windscreen or filter cover: Most camera microphones have a built-in windscreen to reduce undesired ambient noise from wind passing over the mic.

Wired output: By far the most popular connection option, wired outputs enable microphones to connect directly to the camera.

Wireless output: A convenient but pricey alternative to wired connections, wireless outputs have some limitations like limited range and the possibility of signal interference.

Onboard monitoring: Offered with many camera-mounted shotgun mics, onboard monitoring in the form of a small LCD screen or group of LED lights can keep users abreast of the available battery life and audio quality of their microphone.

This is an external screen that reduces the effect of “plosives,” or popping sounds that can happen when speaking words that have p’s and b’s in them. The EARAMBLE is a popular choice that works with many types of mics, and as a bonus, it also serves as a windscreen, reducing excess noise from light wind.

This is an addition to a microphone stand or hot shoe that prevent vibrations, caused by moving around during a shot, from being picked up by the microphone. This shock mount from BTOOP also functions as a pop filter and comes with a universal adapter.

The entry point for camera microphones is fairly affordable, with many lapel mics available for $5 to $15.

A wide range of on-camera mics, including shotgun mics, can be found in the $25 to $69 range.

Wireless mics and supercardioid mics are among the priciest in this class, ranging from $80 to $179 with some models topping out at $599. 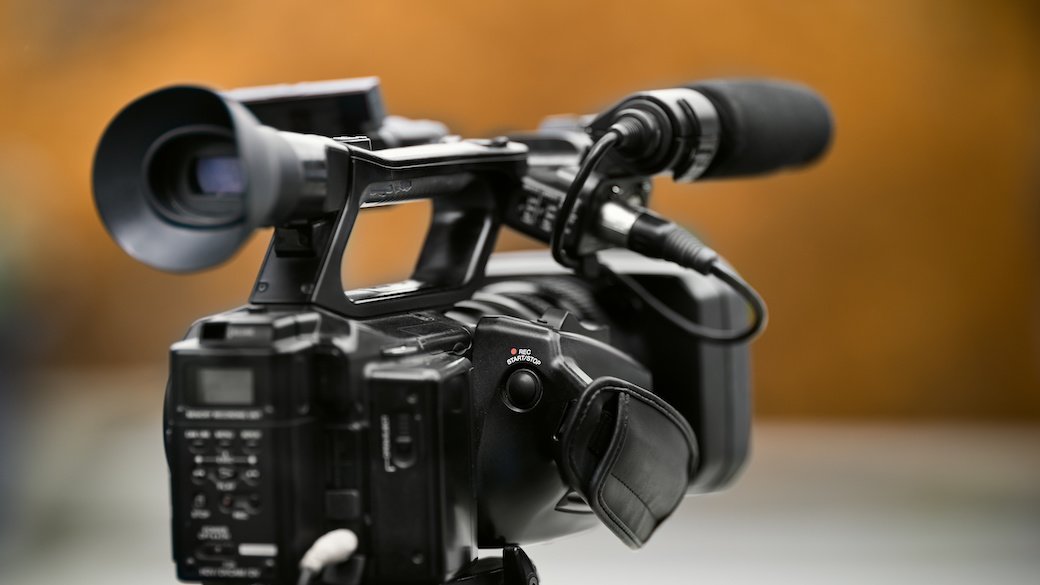 Camera microphones that attach via a hot shoe may use the battery of the camera to power their capsule.

Q. Why do I need to add a windscreen to a camera microphone?

A. In many outdoor recording situations, natural sound, such as wind or ocean waves, may overwhelm the sounds you want to record. A windscreen fits over the microphone and diffuses much of this unwanted noise. A windscreen may be made of foam, fuzzy felt, or furry fabric, each of which is better suited to specific environments. There are even windscreens intended for extreme wind conditions. Even if you’re not recording outdoors, a foam windscreen does a great job of diffusing breathing sounds that can detract from a speaker’s or singer’s voice.

Q. Will a shotgun camera microphone allow me to record speakers from a distance?

A. Camera-mounted shotgun microphones will pick up speakers well from within three to five feet. With distances greater than that, it’s better to use a lapel microphone or a handheld mic to ensure clear, well-balanced audio. 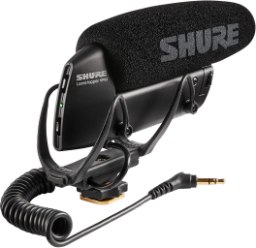 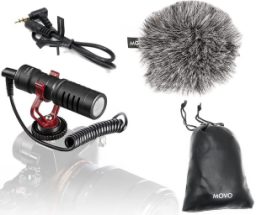 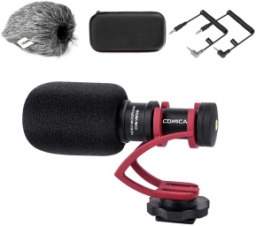 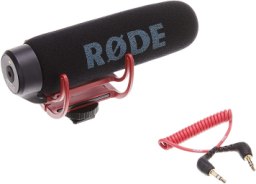 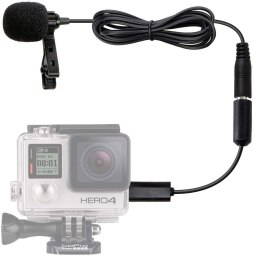 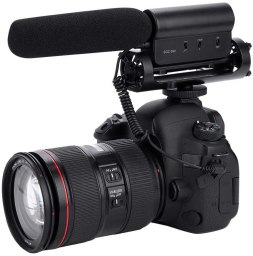