A timeless musical instrument set that encourages musical exploration. Unbeatable quality that lives up to the brand name.

With premium craftsmanship and a focus on sound quality places, this set is head and shoulders above similar kits. Children can play by themselves or form a band. Durable construction is built to last.

Better suited to children over the age of 3. However, with supervision younger kids can enjoy it, too. 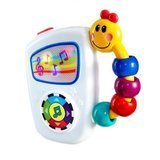 Button needs to be pressed at the end of each song for it to play the next – a feature that toddlers enjoy but can frustrate smaller babies. 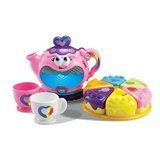 Very much geared toward girls, although boys who manage to get their hands on it will probably love it too! 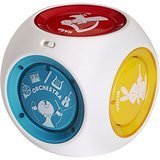 This orchestra in a box allows little ones to select individual instruments featured in classical songs.

A fun early introduction to classical music. Teaches children how each instrument and sound plays a role in music. Little ones get to “compose” music or listen to the instruments together. Lights pulse to the rhythm for visual effect.

A bit bulky, and may be difficult for smaller babies to grip. Tunes could play a little longer. 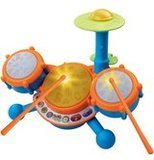 Good, noisy fun that children will love, but might drive parents crazy!

Figuring out how to select the free play option without a backing track is a little tricky at first.

Music is one of the most powerful tools we have. It can elevate moods, sharpen focus, inspire, and even physically change the brain to foster growth and development. Incorporating music toys into your child's playtime can have such a powerful impact that the positive effects could last a lifetime.

The best music toys engage curiosity and encourage creativity, allowing your child to explore and grow at his or her own pace. They must be age-appropriate so there are no safety concerns and be challenging enough so your child doesn't lose interest too quickly. And don't forget, music toys need to be fun!

If you're ready to buy, we've listed a number of highly rated music toys in our shopping guide. Keep reading to learn more about the benefits of music toys and how they can help your child excel in life. 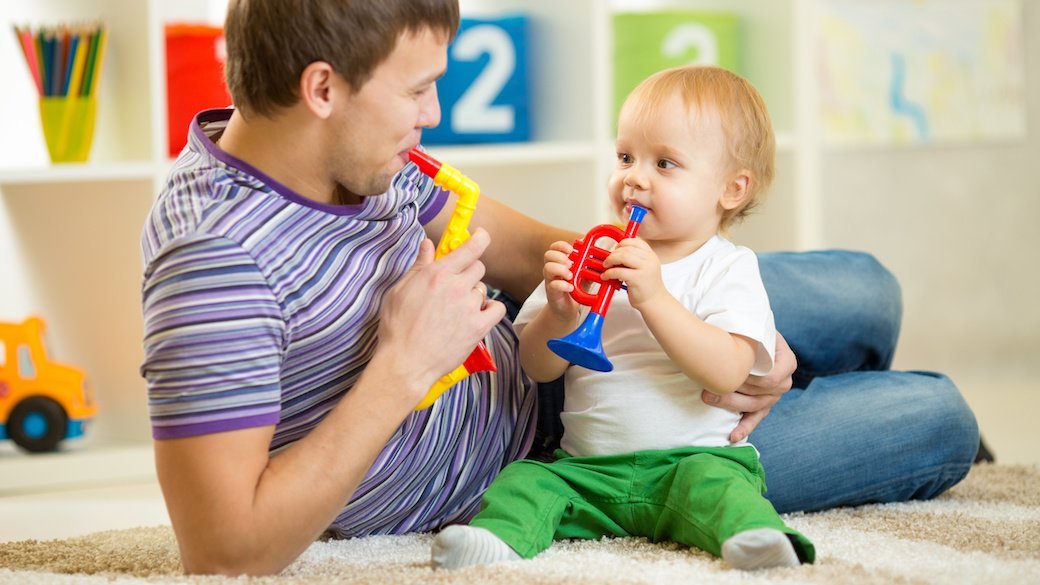 Not only can music soothe the savage beast, it can also calm a cranky toddler.

The most important aspect of any toy for a young child is safety. Avoid toys with small parts, toxic materials, sharp edges, strings, threads, or ribbons. Ideally, a toy should be lightweight as well.

Colors, shapes, and themes all play a vital role in engaging your child's interest. If the music toy doesn't have something that makes it stand out from others scattered about the floor, it will not be used.

Do you want a music toy that requires the child to do something that directly results in a specific sound, tone, or song? Or would you prefer a toy that just plays full songs without the child needing to accomplish a specific task?

After a music toy captures a child's attention, it needs to be able to sustain that interest. A variety of sounds, tunes, and activities will help ensure that a music toy has a long and purposeful play life. 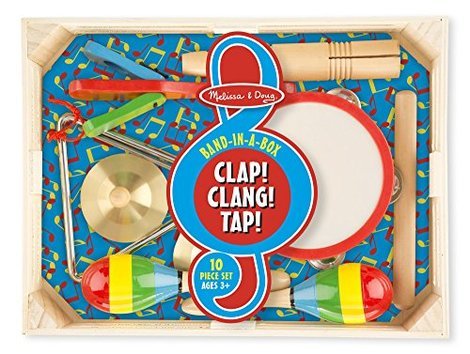 A box of sonic exploration

Melissa & Doug have put together a box full of adventure that encourages development, hand-eye coordination, and fun. The set is comprised of six different percussive musical instruments that each offer a unique sound, allowing your child to partake in a wide variety of stimulating sonic activities. Band-in-a-Box is best for children three and up, but parents can play the instruments to entertain toddlers as well.

Babies develop at different rates. In most cases, being a little behind or a little ahead of the curve is nothing to be concerned about. For the purpose of helping you choose a music toy that keeps your child engaged and developing, here are some general guidelines to make you aware of your child's interests, abilities, and potential at different ages along with some examples of music toys that would be appropriate.

During the earliest stages of development, babies aren't mobile, so they explore by observing and reaching out with their hands and feet. Your baby will turn her head toward a sound. The best kinds of music toys at this age are a rattle or an unbreakable mirror that also makes noise. A musical crib mobile to watch might also be a good idea, but as soon as your baby begins sitting up, the crib mobile has to go.

At this age, babies begin to further explore their world because they can roll over, scoot, and pull themselves up. Your baby will become more adept at using her fingers and will start to understand cause and effect, so a music toy needs a little more variety than a rattle. A plush sensory toy or a cube or another object with different musical features and buttons engages curiosity. A play mat that makes sounds or a musical ball that encourages movement are also examples of music toys that would be appropriate at this age.

From 12 to 24 months, development is phenomenal because your baby can now explore by walking and climbing. Imagination and creativity are on the rise, so toys that foster growth and development in these areas are a good idea. Toys with numerous dials, buttons, switches, and lids as well as a keyboard featuring a variety of sounds and songs can all be beneficial at this age. Books begin to be objects of fascination and exploration during this time, so it's the perfect opportunity to introduce ones that feature buttons that play songs and sound effects to enhance the story.

During these years, your toddler can engage in more complex activities that involve both hands. She enjoys dancing and begins to develop a more personal relationship with music. Music toys that involve a puzzle element or allow your child to combine and layer different sounds are excellent choices, and so are toys that play songs. Music toys that depend on physical actions, such as a xylophone or drum, are good, simple musical instruments that can be used with adult supervision. Children are more social at this age, so this is a great time to introduce music toys that involve playing together with parents or other children.

At this age, musical instruments and complex musical concepts can start to be introduced. A child may begin to learn piano or violin by imitation, but an instrument such as a recorder, which involves specific fingerings to produce different pitches, can be learned as early as preschool.

A positive musical experience at a young age can stay with an individual throughout his or her entire life, offering greater self-confidence and a sense of belonging and providing a safe haven in stressful situations.

Although there are numerous positive developmental benefits offered by music, it is important to be vigilant and watch your child for any adverse effects. It is possible, for instance, for some types of music to be unsettling and cause anxiety in a young child.

In some studies, music was believed to be responsible for helping premature babies gain weight.

If you're looking at spending about $10 or $15, you will get a toy with a small variety of options — a few buttons to press, a few sounds, and maybe some flashing lights.

From $15 to $25, you will start to see musical instruments, and the toys are a little more complicated with specific sounds being related to specific actions (e.g., press the cat to hear a meow).

From $25 to $50 (and above), the toys become increasingly complex to operate (while still remaining age-appropriate) to encourage development and growth. Additionally, there may be many more activities to explore on these music toys. 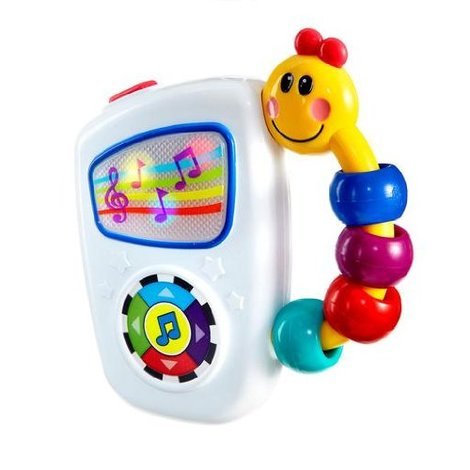 The Baby Einstein Take Along Tunes is sized for a toddler's hands, making it easy for him to grab the handle and take it wherever his wanderlust leads. It features seven classical tunes that your child can advance with a large colorful button. The flashing lights and spinning rings offer additional means of entertainment, and the pleasant tone keeps parents content as well.

How sound and music affect your baby

When your baby is playing with a music toy, not only is she learning by doing, but she is also being affected by the notes, rhythms, and sounds that the toy makes. Here are some elements of sound and music that you need to carefully consider when choosing a music toy for your child.

Entertainment is subjective. What keeps one toddler engaged and developing might not be complex enough to hold an advanced learner's interest. The following musical toys require something a little more from your child, whether it's advanced hand-eye coordination or the ability to think creatively and explore sonic textures.

Liberty Imports’ Rainbow Xylophone Piano Bridge combines a colorful xylophone with drums and a bell in an imaginative world that encourages exploration. The toy even comes with music so your child can learn to play songs. WolVol’s Kids’ Musical Activity Cube is an incredibly stimulating safety-tested toy that features a plethora of activities for your child. With engaging lights, sounds, moving parts, and pictures, this toy has a great deal to offer. B. Toys’ B. Symphony Musical Toy Orchestra can introduce your child to the world of arranging. There are 15 songs with 13 instrumental parts that your child can layer (up to six at a time) to create an original musical arrangement of a classic song. 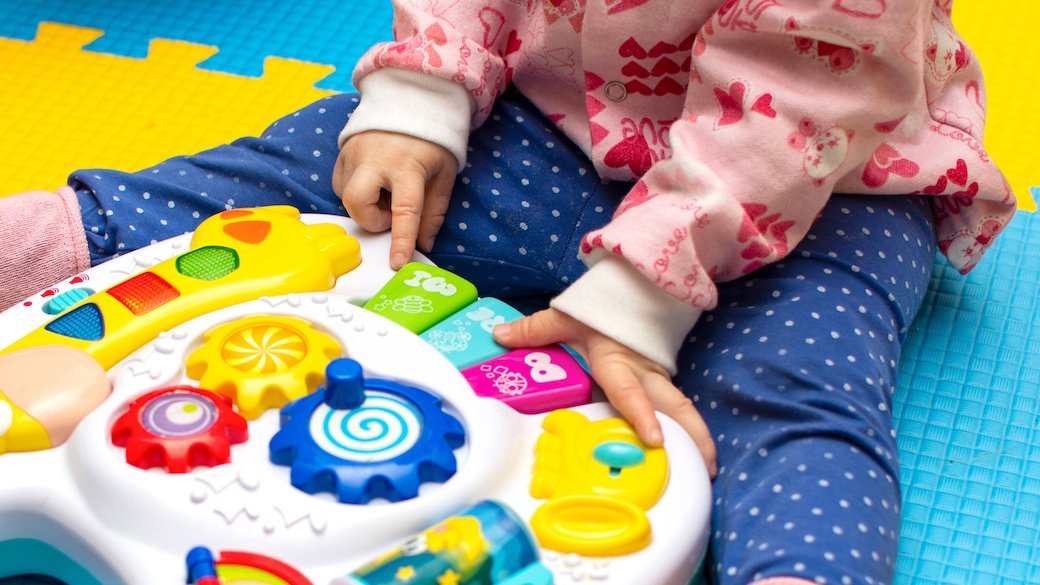 Your baby's first musical toy doesn't have to be musical. Initially, anything, whether it is animal sounds or other noises, will do the trick.

Q. How early should I start introducing music into my baby's life?

A. While still in the womb, after just 16 weeks, a baby begins to respond to sounds. At 24 weeks, rhythm and pitch can affect your baby's heart rate. This is why playing music while your child is still in the womb can have such a profound effect.

A. The toddler years are the most impactful time to introduce your child to music. At as early as 15 months, your child can start relating sounds with actions, the two crucial elements needed to play a musical instrument. A musical toy introduced at this critical age can help a toddler develop creativity, language, memory, and emotional intelligence.

A. The best thing you can do is simply integrate musical activities into your child's daily routine. Sing quiet songs before bedtime and listen to more kinetic music during the day. Watch to see what engages your toddler and explore. Many great musical artists recall a childhood filled with songs and music.

Other Products We Considered
The BestReviews editorial team researches hundreds of products based on consumer reviews, brand quality, and value. We then choose a shorter list for in-depth research and testing before finalizing our top picks. These are the products we considered that ultimately didn't make our top 5.
VTech
Rock and Bop Music Player
MOZOOSON
Touch Play Piano Key Playmat
Ohuhu
Electronic Xylophone & Drum Set
ToyerBee
22 Wooden Musical Instruments
Stoie's
18-Piece Set of Musical Instruments
The team that worked on this review
× 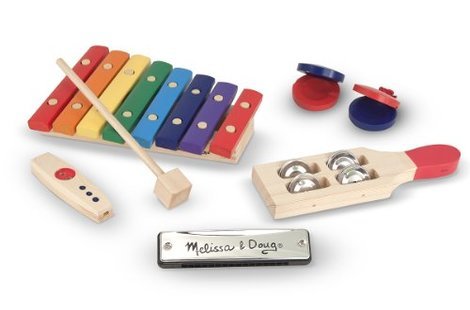 A timeless musical instrument set that encourages musical exploration. Unbeatable quality that lives up to the brand name. 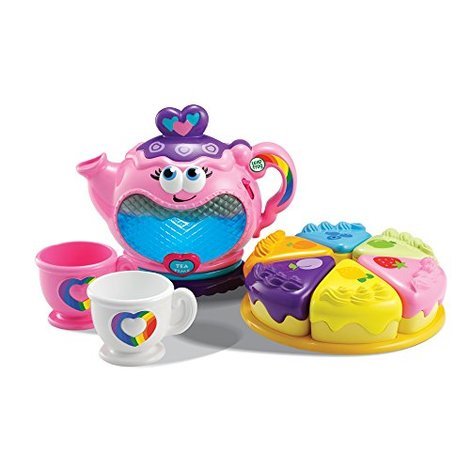 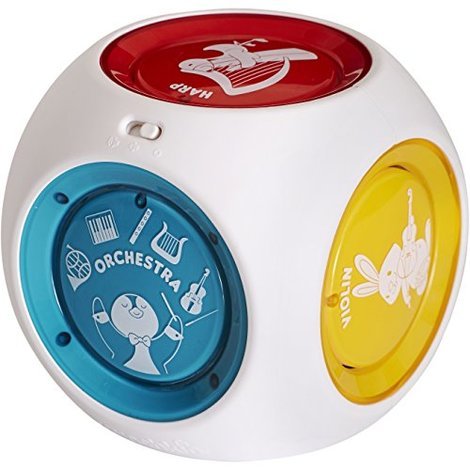 This orchestra in a box allows little ones to select individual instruments featured in classical songs. 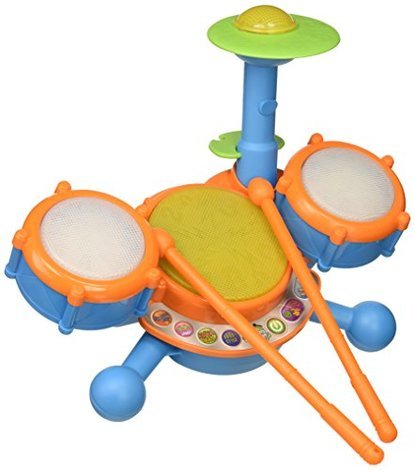 Good, noisy fun that children will love, but might drive parents crazy!