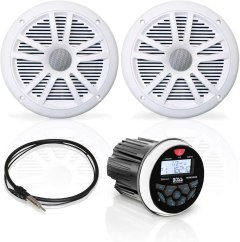 The simple setup works with your smartphone for easy Bluetooth playback from your phone. Includes speakers and a receiver with easy-access buttons. Speakers are small but impressively powerful. Great for those who just want a simple option for their boat.

No CD receiver. Screen might not withstand water as well as the speakers.

A pick that the budget-conscious can appreciate, but it doesn't skimp on features.

A 12V unit with Bluetooth, radio, and a built-in mic for hands-free calls. Input options include aux-in, SD card, and USB. Very affordable. Has a 300W output. Available in black or white. Wears LCD screen. Very easy to mount and includes remote.

Chances are you will be impressed with the functions and acoustics.

Issues with some of the control buttons failing. Known to spontaneously shut off.

Crisp sound and powerful bass are the hallmarks of this waterproof model.

Some issues with contacting support services.

This set includes a pair of waterproof speakers with a receiver and remote.

The 200-watt speakers are built to withstand frequent long outings on the water. The Bluetooth-ready design makes wireless communication and music-streaming simple. Setup is remarkably easy for those with a baseline understanding.

The speakers' sound distorts when the music gets too loud.

Being out at sea is a pleasure, but any boat enthusiast knows that the marine environment can take a toll on equipment. This is particularly true for onboard high-tech equipment, from critical systems that control the ship to creature comforts like the stereo system.

Extremes in weather and temperature, as well as sea salt exposure, can quickly break down a standard stereo. On the water, you are going to want a rugged marine stereo that can handle the rigors of boat life. 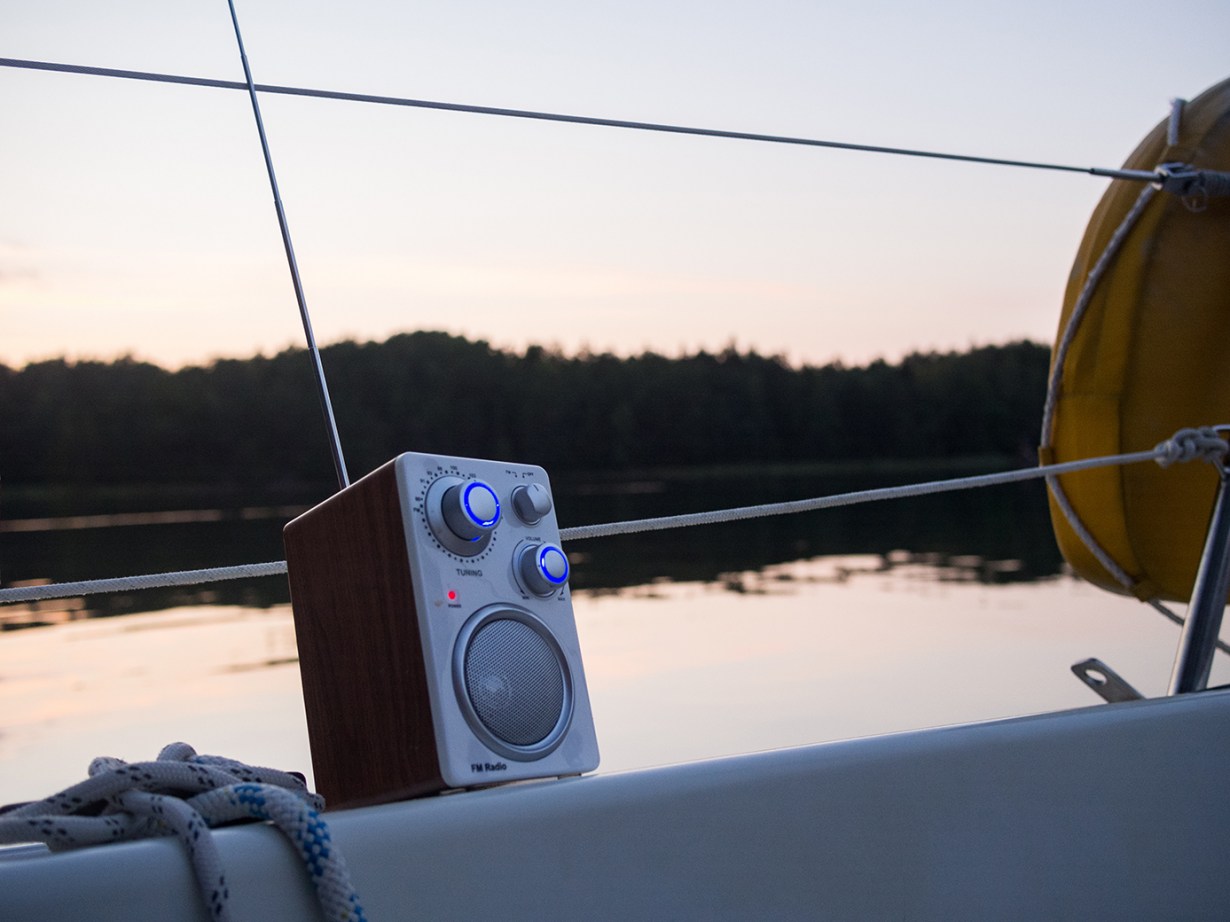 While a newer boat may have a pre-cut hole for a stereo, you may need to cut your own hole into an older boat — or find an alternate place for it.

While car and truck stereos are pretty standardized, marine stereos come in a variety of shapes and sizes.

Single-DIN: Similar to car stereos in size and shape, the majority of these common marine stereos measure 2 by 7 inches. (They are named for an industry standard.) Some oversized units may feature a larger face, more controls, a richer display, and enhanced waterproofing.

Gauge-mount: These round stereos have a similar design to other round gauges found on a boat. Gauge-mounts are usually 3 inches in diameter (to fit existing gauge openings) and typically do not include a CD player.

The integrity with which a marine stereo handles water is a big issue. Water-resistant marine stereos will withstand some contact with moisture (the occasional light splash), while waterproof stereos can often be fully submerged for brief periods without incurring damage.

Water-resistance or waterproofing is often achieved through such features as a sealed chassis, water-resistant faces, and other water-resistant pieces. A marine stereo’s level of water resistance is typically measured via something known as an IPX rating. These ratings range from IPX-0 (no resistance) to IPX-8 (can be fully submerged for extended periods of time).

Protection from the sun’s ultraviolet rays is another quality found in marine stereos but not car stereos. This makes sense because marine stereos can spend a considerable amount of time in the sun. The chassis, faceplate, and other parts should resist fading, cracking, and other damage due to UV ray exposure.

Rust and corrosion can do a fair amount of damage to a stereo, particularly when boating on salt water. A rust-resistant chassis, plated connectors, and coated circuit boards can help minimize these problems.

CD players in a marine stereo are becoming harder to find. A primary reason for this is that they tend to skip when you hit waves. Another reason is the increasing popularity of digital music.

Marine stereos can typically play a variety of formats, including the following.

AM/FM radio: This is a standard feature, but stereos with HD audio produce higher-quality sound.

CDs: Compact discs are not as popular as they once were, but many marine stereos still incorporate CD players for those who take their discs on board. Note that these units take up more space and can have performance issues in choppy conditions.

MP3/USB: Like AM/FM radio, the ability to plug in your phone, iPod, or even a USB drive is standard these days.

Other music services: Some units are also set up with apps to easily access services such as Pandora or Spotify.

The formats a marine stereo can play vary greatly. If you have a favorite, be sure your stereo is compatible with it.

Some marine stereos feature Bluetooth, which allows you to stream wirelessly from your Bluetooth-enabled device and talk on it hands-free.

Marine stereos typically offer a number of options in this area, including USB ports, 3.5mm jacks, and SD card slots.

USB ports: One or more USB ports in a marine stereo provide not only a way to stream music from your phone or other device but also a way to charge them.

3.5mm jack: This is a common input for plugging in devices.

SD card slots: While less standard, more marine stereos are being built with such slots, allowing the use of a media card filled with favorite tunes.

You can use these outputs to hook up speakers and subwoofers. Marine stereos typically have between one and three pairs of RCA outputs.

Some marine stereos include supertuners, which can improve the signal quality and reduce distortion for AM and FM bands. This can be particularly helpful on a boat that might often cruise in low-reception areas.

Another feature for audiophiles is a built-in equalizer, or EQ. Available with some marine stereos, a simple graphic EQ or more complex parametric EQ will provide tools to tweak your sound frequencies.

With a remote, users can control volume, tone, or source without being physically present at the stereo. Any remote should feature RF (radio frequency) as opposed to IR (infrared) technology due to the fact that IR and sunlight tend to work poorly together. 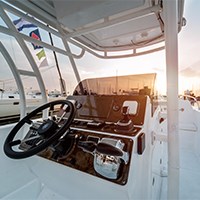 DID YOU KNOW?
With a parametric EQ, you have control over three aspects of a frequency: the level, the range, and the center frequency.
STAFF
BestReviews

Inexpensive: Marine stereos that cost under $50 tend to be simple in design and usually all digital (i.e., no CD option). Stereos in this range typically support fewer sources/formats and offer less water resistance and UV protection.

Mid-range: Marine stereos in the $50 to $150 range generally include some advanced features, such as built-in EQ. These are more rugged than cheaper stereos and often have more input and output options.

Expensive: True audiophiles will want to browse marine stereos starting at $150 and above. Stereos in this range offer the best protection from water, UV rays, and corrosion. They are also more powerful with a crisper, cleaner sound and advanced options, such as HD audio.

If you already have a satellite radio subscription (like SiriusXM), select a marine stereo that can take advantage of it. 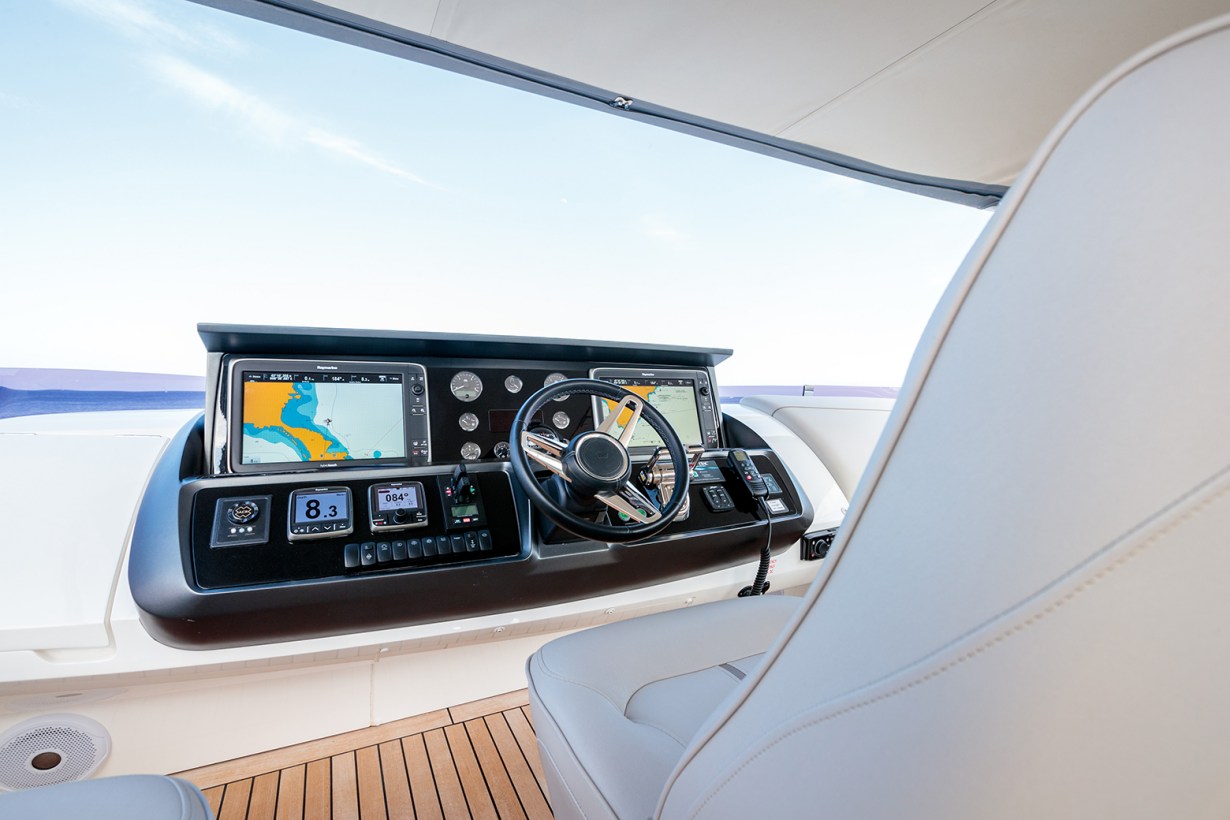 Some marine stereos physically open up so you can store and use your phone or MP3 player directly inside it.

Q. Where is the best place to install a marine stereo?

A. Most people prefer to select a location in the boat that’s out of the way. Some boats have pre-cut holes, which can solve the “where to put it?” issue fairly quickly. Install the stereo in a location where it will not be directly in the sun, in a splash zone, or exposed to the elements.

Q. Can a marine stereo work with steering wheel-mounted controls?

A. Right out of the box? Probably not, although some will. Steering wheel-mounted controls provide an easy way to control the system, but marine stereos usually don’t work with them without an adapter. If you are unsure whether this feature aligns with your particular boat, contact the seller or manufacturer.

A. Generally speaking, yes. Unlike a car stereo, a marine stereo operates out in the open, not in an enclosed vehicle with the windows rolled up. The majority of marine stereos include four-way amplifiers, and you can add an external marine amp to boost the signal. Marine stereos with more sets of RCA outputs also provide an easy way to add extra speakers. 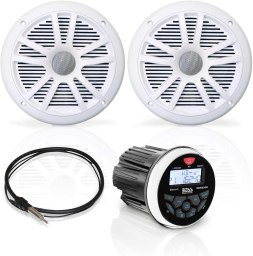 Best Bang for the Buck
Pyle
Marine Bluetooth Stereo Radio
Bottom Line
A pick that the budget-conscious can appreciate, but it doesn't skimp on features.
Shop Now

Top Pick
Prospec Electronics
Marine Digital Media Receiver
Bottom Line
Chances are you will be impressed with the functions and acoustics.
Shop Now 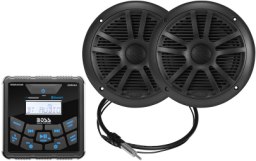 Top Pick
BOSS
MCKGB450B.6 Marine Stereo
Bottom Line
BOSS has a reputation for top-notch sound, and this marine stereo is an example of the brand's quality.
Shop Now