A top-class fan that combines a very low profile with very high quality. We love the fact that the fan blades can be flipped, giving you the choice of white or silver surfaces.

Compact profile provides unequaled in the amount of air. A high quality choice that looks great and operates very quietly.

Bulbs that come with the unit are not bright enough; plan on buying better ones first thing. Instructions can be confusing. 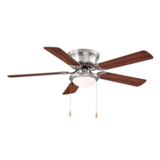 This is a great choice for those looking for an overall solid and attractive fan without having to spend a lot of money.

Great price. The fan looks good, particularly the brushed nickel finish. You have a choice between light and dark sides with the fan blades.

Some buyers report problems with noise, particularly an annoying ticking sound. This option seems a little cheap compared to other fans. 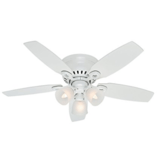 A stylish choice that gets high marks for ease of installation, as well as smooth and quiet operation.

This option comes with great instructions and is easy to install. Great, modern look and super quiet operation.

Some buyers report problems with the fan suddenly dying after a few months of use.

Stands out for its quiet operation and the fact that it can put out a lot of light. Very nice quality for the price.

Great quality for the money, this fan makes little noise but moves a lot of air. Unlike most fans, this design uses full-sized light bulbs, giving you a lot more lighting options. 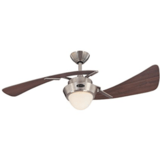 The primary feature here is the unique “sword” fan blades, which both look and work great.

This option doesn’t put out a whole lot of illumination. The fan can make a ticking noise and become a bit unbalanced at high speeds.

If your home has low ceilings, you might struggle to find fans and light fixtures that won’t dwarf the space – or cause any head injuries. In that case, your best option is a low-profile ceiling fan.

Low-profile ceiling fans hang flush with the ceiling, without a downrod, and so fit better in small spaces. Once you’ve found a fan that’s the right size, there are other decisions to make. What kind of motor? What type of blades? What finish? Do you want remote control or a wall switch? What about a light? It can all seem a little overwhelming if you’re not sure what you’re looking for.

Fortunately, BestReviews is here to help. We’ve put together this shopping guide to answer all of your questions about choosing the right low-profile ceiling fan for your home. 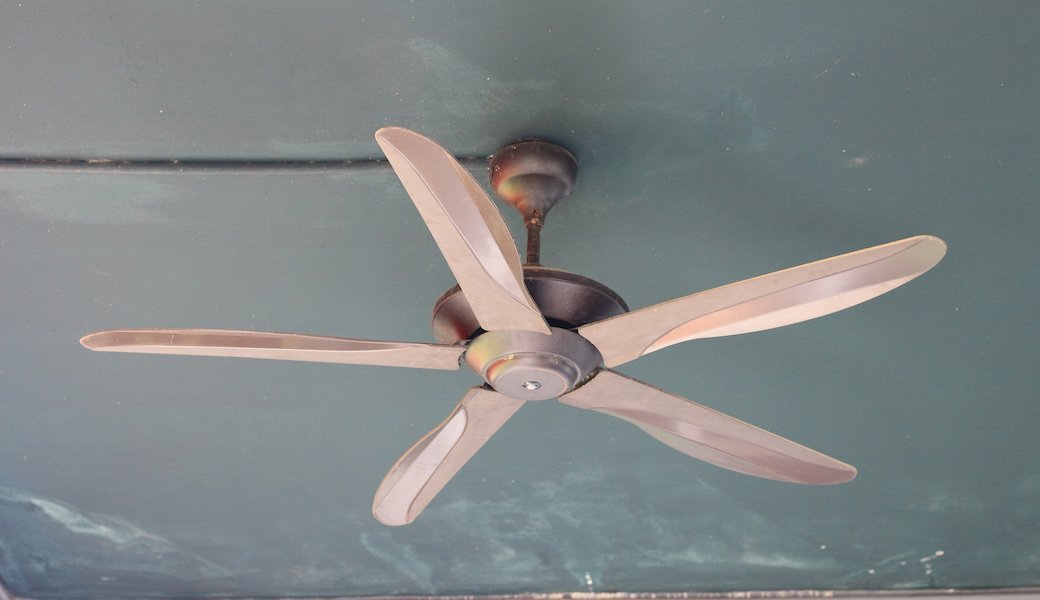 The ceiling fan motor is a crucial feature because it determines how much air gets moved around, how energy efficient the fan is, and how loud the fan is.

When evaluating fan blades, you should focus more on the material than the number. The number of blades doesn’t significantly impact the airflow, so it’s more of an aesthetic choice. Fan blades are made of a number of different materials, each of which has its own pros and cons.

Not all low-profile ceiling fans come with lights. It’s a matter of personal preference and what the space requires. If the room is already well lit, you might not want a fan with a light. But a light on the fan can be a nice addition if the room is dimly lit.

Keep in mind that a fan with lights might hang a little lower than a fan without lights, so you have to make sure that it won’t hang too low or overpower the space. Check to see that any lights that come with the fan are bright enough for your needs. Sometimes the included bulbs are too dim, so you might want to replace them.

Some fans that don’t come with a light built in still have the connections, so you can add a light later if you want to. However, these lights attach to the bottom of the fan and often hang down much lower than lights that come built into a fan.

Most ceiling fans come with a basic pull chain that enables you to adjust the fan’s speed and turn any lights on and off. But this isn’t always ideal, especially if the ceiling is high. In that case, you’ll want to look for a fan that you can control with either a wall switch or remote control. A remote control offers the ultimate convenience because you can adjust the fan’s settings and turn any lights on and off without having to move.

Some low-profile ceiling fans are easier to install than others. This won’t be an issue if you plan to hire someone to install it for you, but if you’re going to do it yourself, get some idea of how simple the installation process is by reading through customer reviews. If the model you’re looking at has a lot of complaints about the installation, that probably isn’t the right choice unless you have a lot of technical know-how.

Some ceiling fans come with reversible rotation so that they can keep you cool in the summer and warm in the winter.

Airflow and energy efficiency are usually listed on the fan’s packaging, so it’s easy to compare different models.

Low-profile ceiling fans range in price from $50 or over $300, depending on what you’re looking for.

Inexpensive: For under $100, you can expect to get a basic, no-frills low-profile ceiling fan. The blades will likely be MDF, and you’ll probably be limited to pull-chain controls. These fans are usually only safe for indoor use and might end up warping or breaking if exposed to a lot of moisture.

Mid-range: There are more style options if you spend between $100 and $200. These fans are more likely to have integrated lights and possibly blades made of solid wood. If you want a fan with a quiet and efficient DC motor, you should expect to spend at least this much.

Expensive: If you spend over $200, you’ll get more advanced features like dimmable lights and a reverse function. Most of these fans come with DC motors and sturdy, high-quality blades. You’ll have to decide if these extras are worth the added cost to you.

You can use an outdoor fan indoors, but an indoor fan should not be used outdoors. 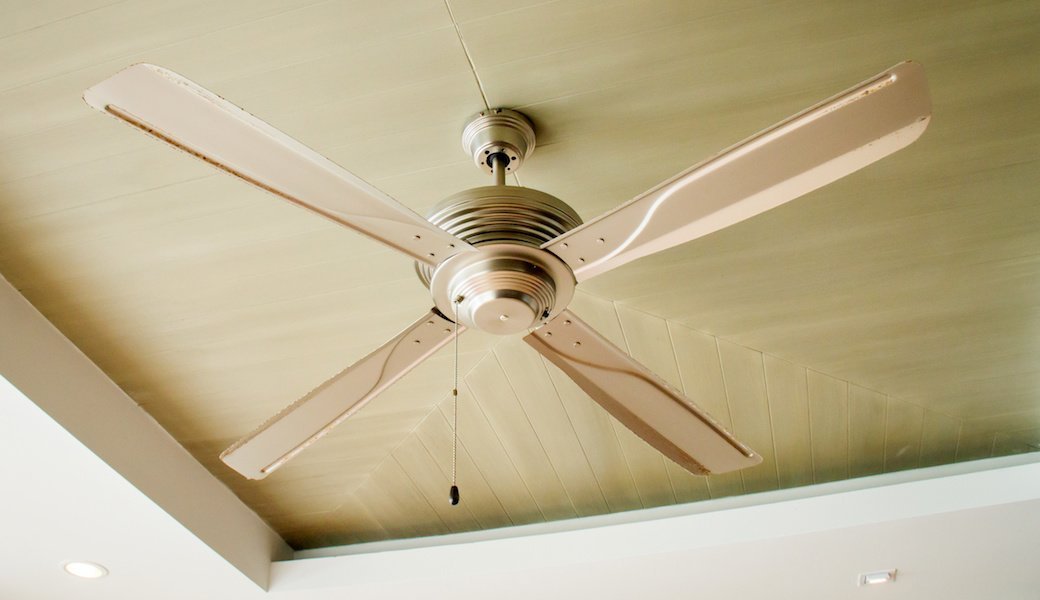 If you’re concerned about energy efficiency, look for a fan with an Energy Star rating.

Q. How far will a low-profile ceiling fan hang down from the ceiling?

A. That depends on several factors, including whether or not the fan has a light attached. There should be at least eight inches between the fan blades and the ceiling in order for the fan to circulate an adequate amount of air.

Q. Can I hang a low-profile ceiling fan on an angled ceiling?

A. No. Low-profile ceiling fans are not equipped to hang from an angled ceiling. You will need to choose a fan that comes with a downrod.

Q. How do I maintain my low-profile ceiling fan?

A. Always read your owner’s manual for any details on required maintenance or cleaning. In general, these fans require little maintenance, but if they haven’t been used in a while, you might have to dust the tops of the blades. 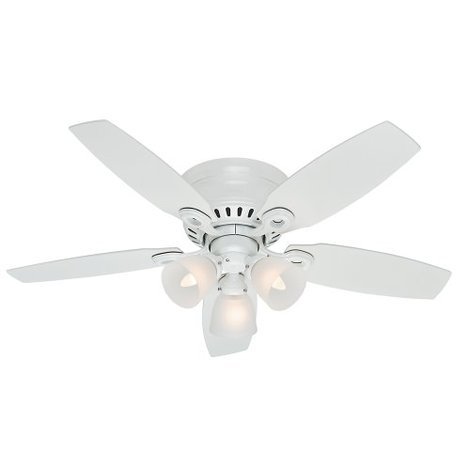 A stylish choice that gets high marks for ease of installation, as well as smooth and quiet operation.

Stands out for its quiet operation and the fact that it can put out a lot of light. Very nice quality for the price.

A top-class fan that combines a very low profile with very high quality. We love the fact that the fan blades can be flipped, giving you the choice of white or silver surfaces.

The primary feature here is the unique “sword” fan blades, which both look and work great. 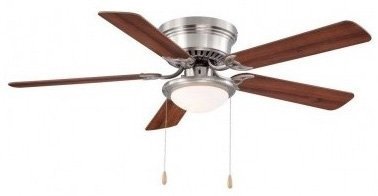 This is a great choice for those looking for an overall solid and attractive fan without having to spend a lot of money.