An excellent pick when it comes to comfort and flexibility for water activities that only require minimum buoyancy standards.

Not recommended for wear in rough waters or unsupervised use. The pockets are on the small side, and won't hold much. Pricier than similar models. 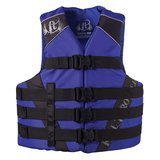 A good choice for adding safety to many types of water activities – a well-rounded, versatile vest that is also a good deal.

Though lightweight and comfortable, it's constructed with 200 denier nylon and 150 denier poly-twill for rugged wear. Easy to adjust, plus it runs truer-to-size than some of its competitors. Type III rated and Coast Guard approved. Reasonably priced.

Not rated for protection in rough waters. Some larger and taller individuals may find it a bit tight or short. 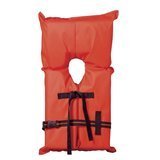 Provides an affordable and comfortable way to add protection in most types of calm and inland waters.

A Type II rated vest capable of turning the majority of unconscious wearers face up in water – better buoyancy than type III models. Offers a budget-friendly price and a comfortable fit.

Though recommended for wearers at least 90 lbs, sizes tend to run small. Not rated for wear in rough waters. Basic – no pockets or other extras. 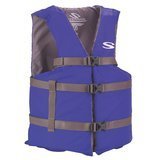 A super sturdy, well-made life jacket for water-bound adventurers. The downside is the extra effort it may take to ensure you get a size that fits.

Fits small and tight, but most people that have worn it say it's comfortable once you find the right fit. Not for rough-water wear.

Stands out for its stylish looks and comfort when consumers can find the right size – but the fact that it runs small may make it impractical for some.

Has Coast Guard approval in an attractive style –wearers rave about its good looks and comfortable fit. Adjustable straps and zippered front make it easy to secure.

Runs very small – some owners suggest choosing a size larger than you may otherwise wear. Also a bit pricey. Not for rough waters. 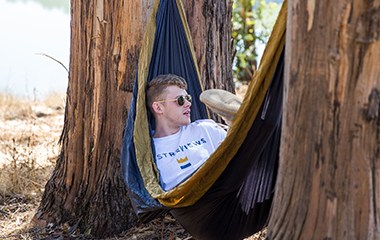 Whether you’re swimming, boating, water skiing, or jet skiing, spending time on the water is a great way to stay cool during the summer. But even if you’re an experienced swimmer, it’s important to stay safe, which is why life jackets are a necessity.

But there are so many life jackets to choose from that finding the right one can be a real challenge. You have to figure out which type of life jacket is best for your water activities, as well as determine the ideal material, size, and other features to ensure the utmost comfort and safety.

Our goal at BestReviews is to simplify the shopping process. We do the thorough research, so you can find the best products for your home. If you’re ready to shop for a new life jacket, our shopping guide is full of helpful tips and advice. 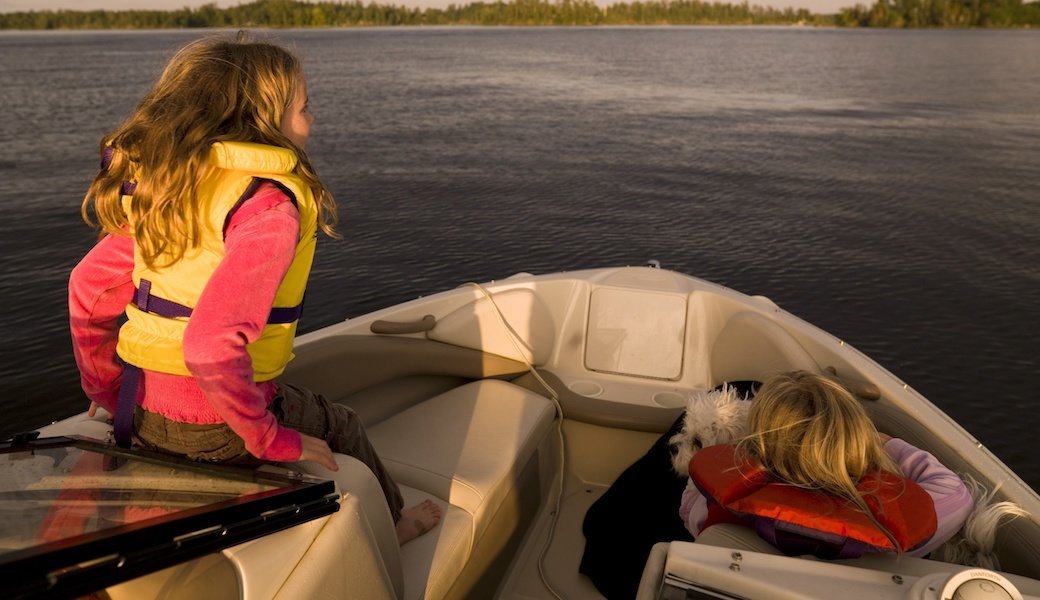 According to federal regulations, any child under the age of 13 must wear a life jacket at all times onboard a boat.

A Type I life jacket is also known as an offshore life jacket, and it is designed to help you stay afloat in rough, open water for a prolonged period of time. Type I life jackets provide a minimum buoyancy of at least 22 pounds for foam jackets and 33 pounds for inflatable jackets. Type I life jackets can keep you face up in the water even if you’re unconscious, which is why they’re often used on ocean fishing boats, cruise ships, freight ships, and other large commercial ships.

Type II life jackets are also known as near-shore buoyant vests, and they are designed to keep you afloat in calm, inland waters where you’re likely to be rescued quickly. They’re typically less bulky than Type I jackets and most have a minimum buoyancy of 15.5 pounds. In calmer waters, a Type II life jacket can usually keep you face up in the water if you’re unconscious.

Type III life jackets are used mainly for water skiing, kayaking, canoeing, wakeboarding, and other water sports. They have a minimum buoyancy of 15.5 pounds, but their comfortable, lightweight design means that they aren’t very effective at keeping you face up in the water if you’re unconscious. 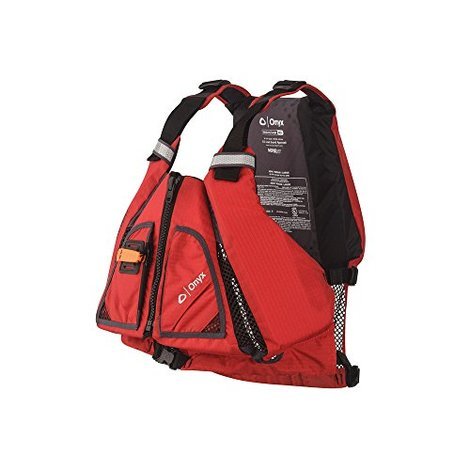 The Onyx MoveVent Torsion Paddle Sports Life Vest is an USCG-approved Type III life jacket, which means it’s perfect for canoeing, kayaking, and stand-up paddling. That’s because its lightweight, sculpted design provides excellent mobility for most activities. We also love that this life jacket includes expandable mesh pockets for storage and reflective accents to increase visibility in the water.

Life jackets are made from a few different materials. The most common options are nylon and neoprene.

Nylon is usually less expensive, though it’s still a highly durable material. It’s also lightweight, which makes it comfortable to wear. It’s often used for paddle sports life vests because it’s easy to cast your reel or paddle a boat while wearing a nylon life jacket.

Neoprene is a more expensive life jacket material, but it usually offers a better fit than nylon. It also offers greater buoyancy to keep you afloat. Neoprene is usually used for water sports life jackets because it’s extremely easy to move in if you’re water skiing, jet skiing, or tubing. It’s also a good option for colder water because the neoprene provides extra warmth if you fall into the water.

Depending on what activities you plan to use your life jacket for, it helps to have pockets and/or gear loops so you can keep supplies close at hand. These include items like a compass, fishing tools, and an emergency whistle. However, be careful not to place heavy items in your pockets or on your loops because they can affect the life jacket’s buoyancy.

If mold or mildew develops on your life jacket, you can usually remove it by scrubbing the stains with a solution of two parts water and one part hydrogen peroxide.

Getting the fit right for a life jacket is crucial for reliable protection when you’re in the water. A life jacket should have a snug fit without being too constrictive or uncomfortable. You can find life jackets in adult, youth, child, and even infant sizes, though each category has different criteria for sizing.

Adult and youth life jacket sizes are usually based on chest measurements, so you should measure the widest part of your chest to determine the proper size. Children’s life jacket sizes, on the other hand, are based on weight, so be sure to weigh your child before purchasing a jacket.

In case of an emergency, it’s a good idea to have reflective patches on your life jacket. Reflective patches can help rescue teams locate you in the water, particularly if they’re searching at night. You may also want to choose a life jacket in a loud, bright color to make you more visible during the day.

Don’t clean your life jackets in the washing machine. They can easily get damaged.

Life jacket prices vary based mainly on the jacket type, though it’s important to note that larger sizes usually cost more than smaller sizes. In general, you can expect to pay between $12 and $150 for adult life jackets.

Type I life jackets usually range from $24 to $122. Type II life jackets are usually less expensive because they don’t offer the same amount of buoyancy. They typically run from $12 to $55.

Type III life jackets are usually the most expensive option for personal use. They don’t offer the same buoyancy as Type I jackets, but their comfortable, lightweight design makes them ideal for water sports, which drives up the price. You’ll usually pay between $38 and $150. 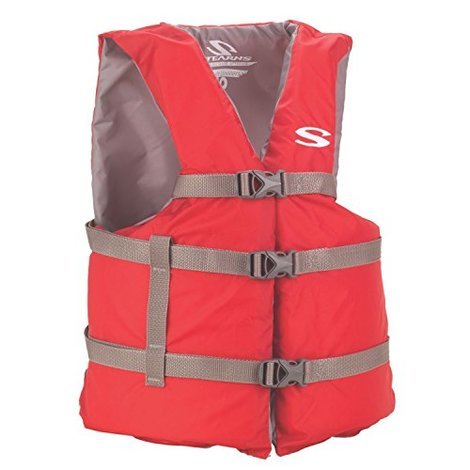 An effective, basic life jacket at a budget-friendly price

The Stearns Adult Classic Series Vest is USCG-approved, so it’s safe for swimming, boating, and tubing. It’s made of durable nylon and floatation foam, which means it will hold up well to repeated use. This Type III life jacket is affordably priced, and it has three adjustable chest belts to make it as comfortable as possible, too. 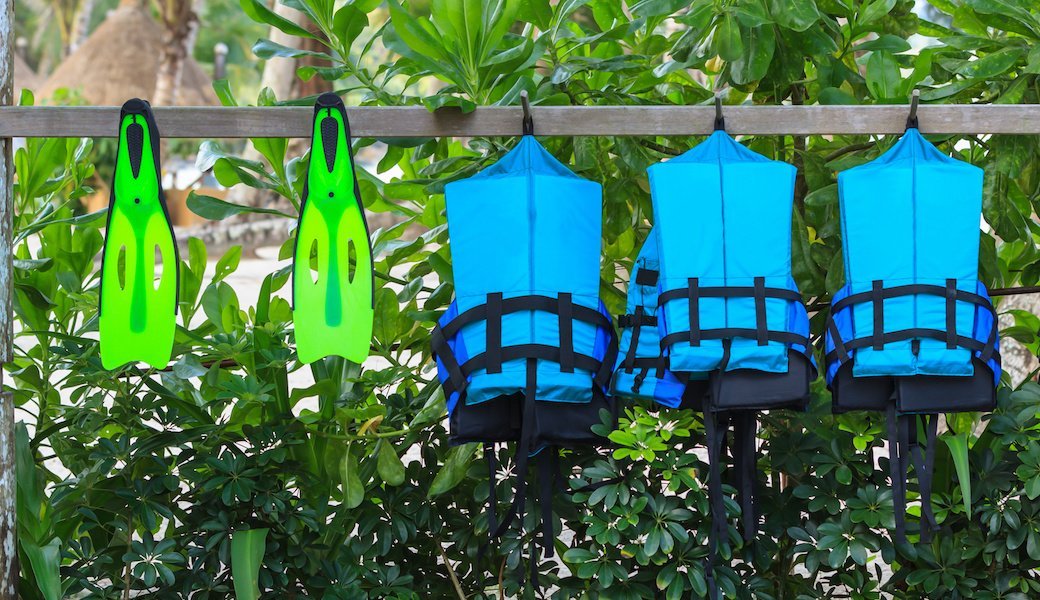 To keep your life jacket in good condition, store it in a cold, dry place where it’s not exposed to sunlight.

Q. How long does a life jacket last?

A. It usually depends on how often you use the life jacket and how well you care for it. You should inspect the jacket regularly to see if there are any rips or tears, and replace it as soon as you notice any signs of damage. That includes faded color on the exterior of the life jacket because a faded jacket is harder for rescue crews to spot. In most cases, though, a life jacket will last five to seven years.

Q. What type of life jacket should I buy if I don’t know how to swim?

Q. Do I need a life jacket with greater buoyancy if I weigh more?

A. In most cases, heavier people actually have more natural buoyancy than thinner people because fat floats more easily than muscle. As long as you choose a life jacket that offers at least 10 extra pounds of buoyancy, you should be fine no matter how much you weigh.

An excellent pick when it comes to comfort and flexibility for water activities that only require minimum buoyancy standards. 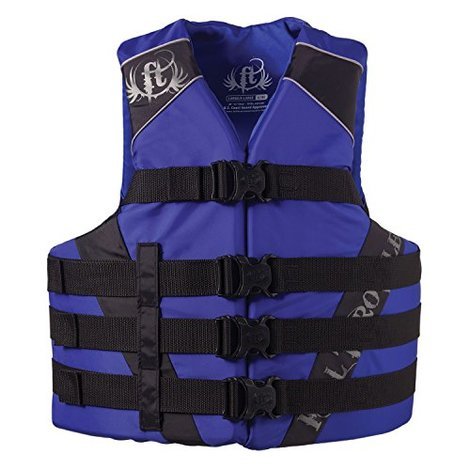 A good choice for adding safety to many types of water activities – a well-rounded, versatile vest that is also a good deal. 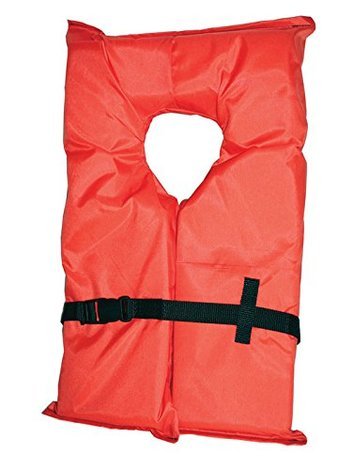 Provides an affordable and comfortable way to add protection in most types of calm and inland waters.

A super sturdy, well-made life jacket for water-bound adventurers. The downside is the extra effort it may take to ensure you get a size that fits. 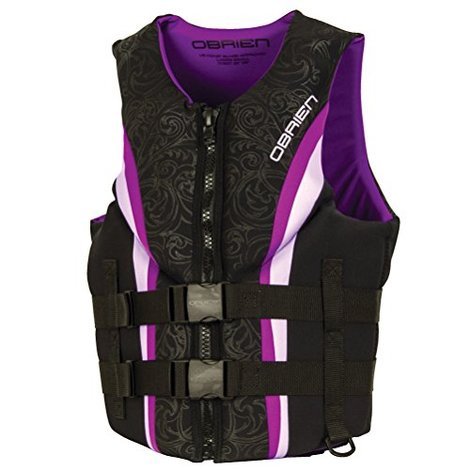 Stands out for its stylish looks and comfort when consumers can find the right size – but the fact that it runs small may make it impractical for some.