Though a bit pricier than some other products, it's an enticing choice if you like the unique hanging features.

Some owners say their product didn't come with instructions, though this may not be an issue since installation is fairly straightforward. 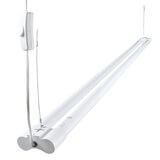 It has the basics you need in an LED shop light, as well as a lower price. The one to get if you'rere on a budget.

Some owners say it emits a bit of heat. It turns on and off with a switch instead of a pull chain, which some find inconvenient. 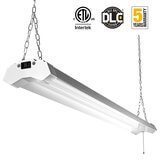 Earns the top spot on our list for its exceptional light, no-hassle installation, and commercial-grade construction.

Solid build, perfectly bright light, and simple installation. Light appears brighter than others models, including fluorescents. Links easily to others if you need more than one. 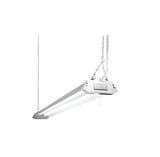 It produces decent light and is easy to install, but problems with the pull string may deter some potential buyers.

An attractive light that's easy to install. Emits bright white light; lights up a room with no flickering or blue hue noted. Lightweight yet durable.

There have been owner complaints about the pull chain coming loose or malfunctioning. 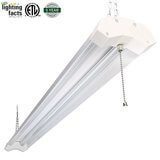 A good product of high quality, although the hardware isn't as great as it could be. Owners love the light it emits.

The included hardware is not as hardy as the light itself. Screws and clamps are flimsy.

If you ever spent time in your father’s or grandfather’s workshop, you probably remember what the lighting looked like … or, more appropriately, what it sounded like. The old fluorescent tube lights delivered a decent amount of light – at least when they weren’t flickering. But the buzzing noises they made were impossible to miss.

Today’s shop lights feature a technology that leaves fluorescent bulbs in the dust. LED (light emitting diode) technology renders better-quality lighting than ever before. For those who work in a shop, LED technology can help with precise woodworking tasks and other activities that require a keen eye. 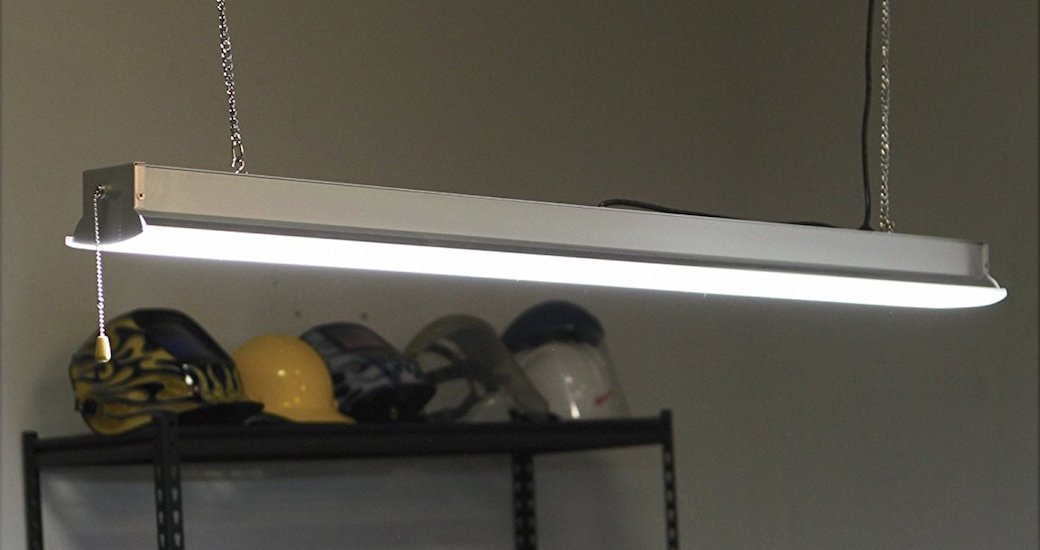 An overhead fixture is a valuable workshop addition, as this type of fixture can cast bright, even lighting over a workbench or other large space.

You can use a few different styles of LED lights in your workshop. No matter what type of lighting you want to have in your shop, you can count on the fact that an LED version will be available.

If you need light in all of the nooks and crannies of your shop, consider an LED light bar that runs off rechargeable battery power. These lights are portable and extremely bright, making them a great option when you need extra light in an out-of-the-way spot. 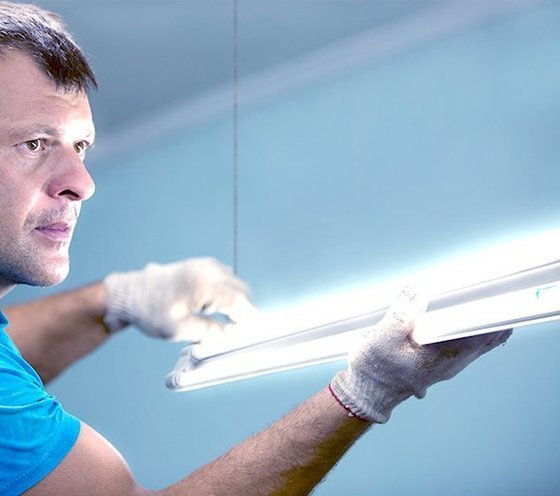 It’s better to hang your ambient lights before adding task lighting. That way, you can easily determine where you really need the light.

Overhead lights are commonly seen in today’s workshops. You can hang an overhead light from a chain attached to the ceiling, dropping it as close as needed to your workspace. Or, if you need more headroom, you can mount it directly to the ceiling.

Overhead lights typically stretch about four feet across. This width allows the light to illuminate a larger space, such as an entire workbench. Most overhead lights are fitted with tube-style light bulbs of the same size as the fixture.

To make an overhead light work as efficiently as possible, make sure the fixture you are using reflects light downward. Additionally, you should avoid mounting an overhead light too close to a wall, as the obstruction might prevent the light from spreading evenly over the entire area. 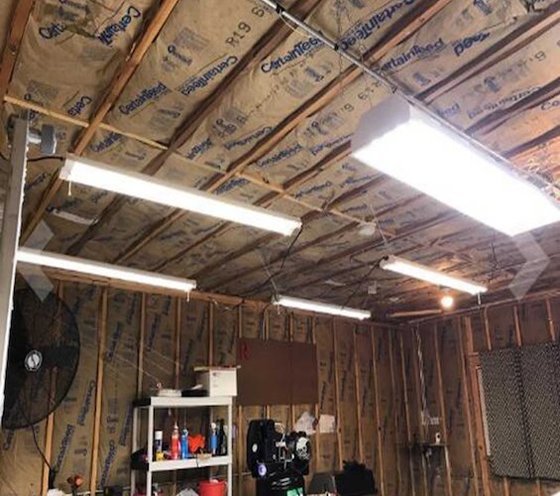 LED lighting emits a type of white light that makes it easier to see the exact shade of the stain or paint you’re using.

If you don’t like the look of the tube-style light bulbs in overhead lights, an LED track light might be more your speed. This type is made up of small flood lights attached to a mounted track, allowing you to aim the light source in a particular direction.

Notably, the track should be mounted directly to the ceiling. This means that if you have high ceilings in your workroom, the bulbs might not be powerful enough to reach your work area.

If you have lots of cabinets for storage over your workbench, placing an LED light underneath can give you good task lighting. This type of light brightly illuminates a specific area of the workbench.

You’ll want to mount these lights directly underneath the cabinets to give you as much room to work as possible. If a light is hanging beneath a cabinet, you could bump into it.

Pick LED workshop lights with fixtures that have hoods or other hardware to reflect the light downward, where it’s needed.

When adding LED shop lights to your workspace, you have a few different options. We’ll split those options into categories based on whether you already have lights – such as fluorescents – or whether you’re starting from scratch.

If you have fluorescent tube lighting and ballasts already installed in your workshop, you may be able to just swap out those tubes for LED tube-style lighting, also called TLED. The ballast (which is the hardware that holds the light tubes) must be compatible with LED lights, however. 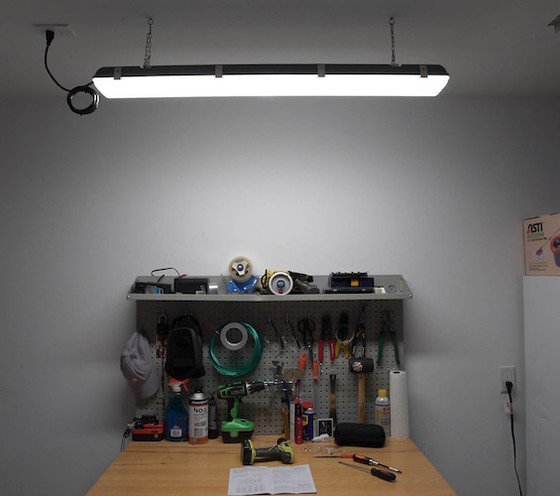 With a new installation, you can choose any of the types of LED lighting we described above. For general lighting needs, overhead LED lights are a good place to start. You can then add more types of lighting as you figure out exactly what kind of light and how much of it you need.

When you purchase a new fixture, it may have the LED light built into it, meaning you cannot swap out the bulb if it burns out. You just have to replace the entire fixture when it’s required. Because LEDs last so long, this type of fixture works very well for most people. Other fixtures allow you to replace the LED bulb, just as you would with a fluorescent-style tube light.

An LED light tube emits nearly double the amount of light that a fluorescent tube does, yet power consumption remains the same. You get a lot more bang for your buck with an LED.

There’s not much variation when it comes to LED shop light pricing. 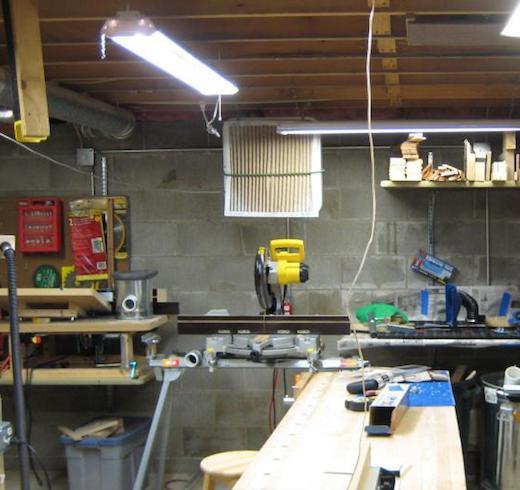 To avoid glare, don’t hang a shop light directly over the area in which you’ll be working. 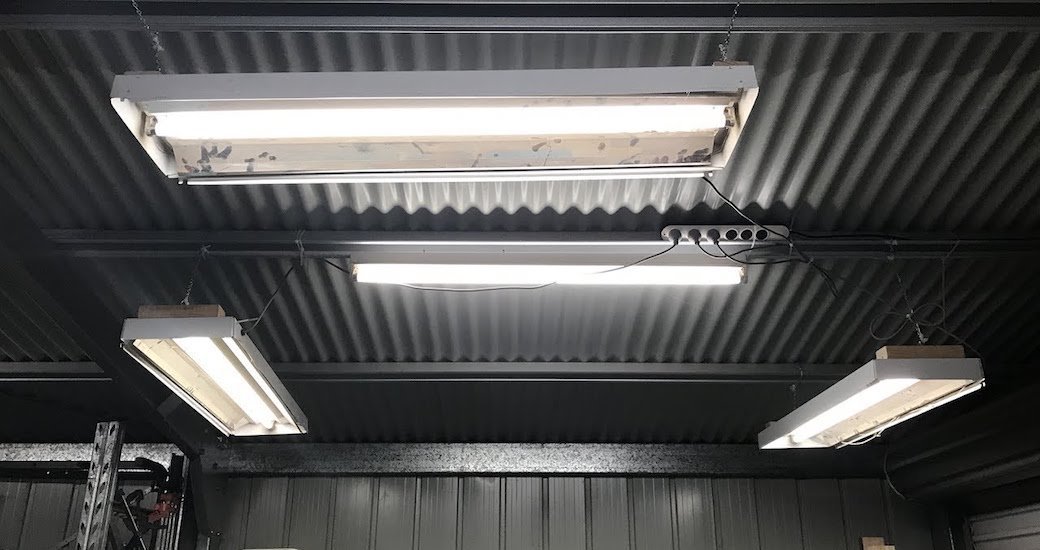 For the best illumination possible in your workshop, consider using a mixture of ambient lighting and task lighting from LED shop lights.

A. LED shop lights carry significant advantages over other traditional lights, especially fluorescent lights. An LED light has over twice the lifespan and uses only about 60% as much power. So you’ll save money in replacement costs and usage costs with LED over fluorescent, and you’ll experience better light quality, too.

Q. Is it worth replacing my current shop lights with LEDs?

A. From a cost perspective, you’re probably better off allowing your current lighting to burn out before replacing it. If you’ve recently replaced the bulbs in your fluorescent shop lighting, for example, you still have hundreds of hours of performance remaining. It doesn’t make much sense from a cost perspective to throw away that remaining lifespan.

However, if you want a better quality of light now, you won’t regret the investment in LEDs. You’ll spend some money upfront to upgrade to LED, but you’ll save big in costs over the long haul.

Q. Should I wait for better LED technology before upgrading? After all, changes occur constantly.

A. Although it’s true that LED lighting advancements are occurring quickly, that doesn’t mean you should wait to upgrade. It’s unlikely that LED technology will undergo a massive change in the next few years. Instead, the upgrades will probably be slow and steady. So waiting doesn’t make much sense, as today’s technology has already reached a high level.

Q. What are the best places for task lighting in a workshop?

A. The need for task lighting in a workshop has changed in recent years. In the past, you may have wanted a task light directly over areas where you had power tools. However, many tools now include built-in task lights. For this reason, it’s usually best to focus on evenly lighting your entire workbench area. 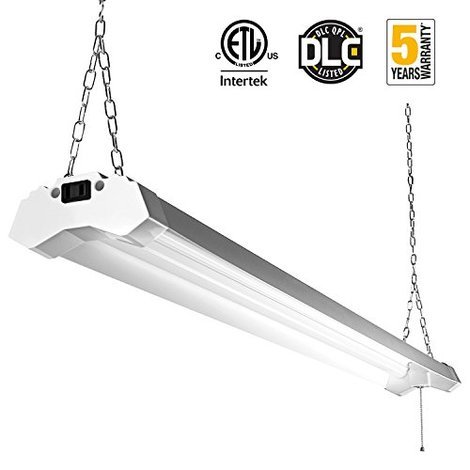 Earns the top spot on our list for its exceptional light, no-hassle installation, and commercial-grade construction. 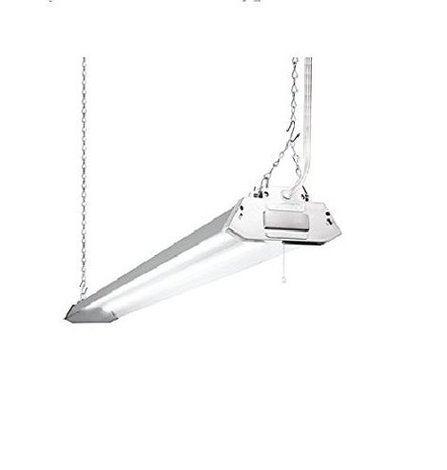 It produces decent light and is easy to install, but problems with the pull string may deter some potential buyers. 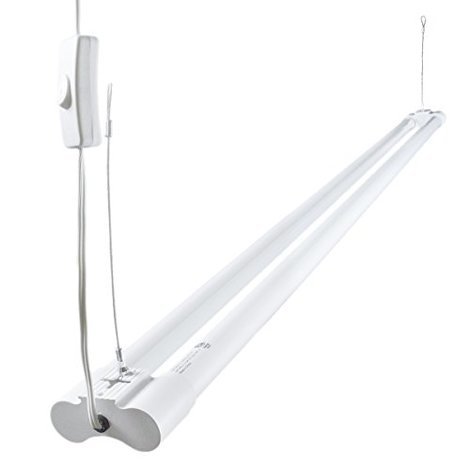 It has the basics you need in an LED shop light, as well as a lower price. The one to get if you'rere on a budget. 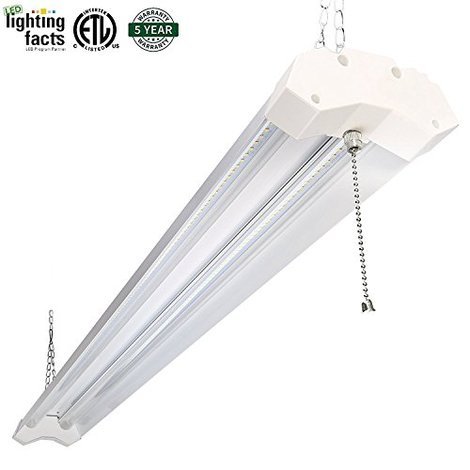 A good product of high quality, although the hardware isn't as great as it could be. Owners love the light it emits. 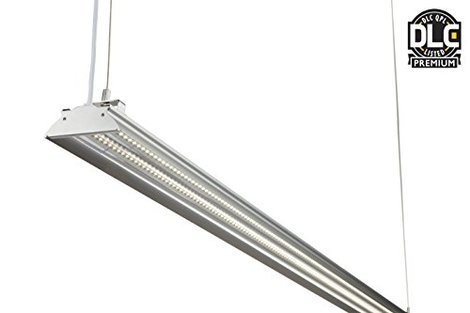 Though a bit pricier than some other products, it's an enticing choice if you like the unique hanging features.