This spacious inflatable kayak comes with everything you need to get out on the water.

Lightweight and portable, despite its large size. Stability is comparable to a hardshell kayak. Booster seats are included for those that prefer to sit higher up. Has plenty of leg room, as well as footrests.

The fishing rod holders are tilted in an odd way, making them difficult to use. 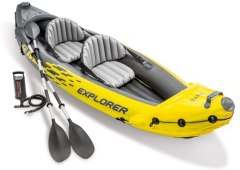 A great choice for novices and enthusiasts who like to spend time on lakes and in relatively slow-moving water.

The bright yellow design stands out on the water and ensures you're visible to others. The adjustable inflatable seats have comfortable backrests. Made with surprisingly durable materials for such an affordable kayak.

Can feel a little cramped for 2 kayakers.

A durable, comfortable 3-person kayak made by a trusted brand.

This durable model can fit up to 3 people and has a 650-ib capacity. It contains generous storage space for paddles, gear, and life jackets. The kayak is very forgiving around rocks, limbs, and other hazards.

This rugged kayak is perfect if you're looking for a portable option for catching fish.

Durable kayak that's compact when it's deflated and sturdy when inflated. Comes with paddle holders and D rings to attach fishing rods (or whatever else you might need to attach). Floor and sides are high enough that your feet will stay relatively dry.

Some users reported the kayak warping with repeated use.

An excellent blend of an inflatable kayak’s convenience and a hardshell kayak’s performance.

Easily travels through the water with an aluminum-rib frame. Quick set up thanks to its folding frame. Seat is supportive and comfortable. Plenty of storage capacity. Made with puncture-resistant, triple-layer material.

Heavy and can be hard to carry.

Kayaking offers a great way to exercise and enjoy nature. Nothing quite beats a day on the water, fishing, battling rapids, or just spending time with family and friends.

If you’ve skipped this sport so far because of the hassle storing a hard-shell kayak, you’re not alone. Traditional kayaks are bulky, and even a small one takes up a pretty sizable space in your garage or shed. You also need a vehicle large enough to transport it. Those requirements can make kayaking seem like an inaccessible hobby to many.

Perhaps it’s time to consider an inflatable kayak. The inflatable kayak doesn’t require much space when deflated, making kayaking more accessible to more people. For those who don’t have much knowledge about inflatable kayaks, we have the information you need. At BestReviews, we perform detailed research in each product category, seeking to give readers the trustworthy information they need.

Because we never accept free samples from manufacturers, you can trust our information and product selections. We pride ourselves on providing bias-free information for consumers. So, if you’re ready to purchase, check out the recommendations in our product list, above. To learn more about criteria for finding the best inflatable kayak, read on for our shopping guide. 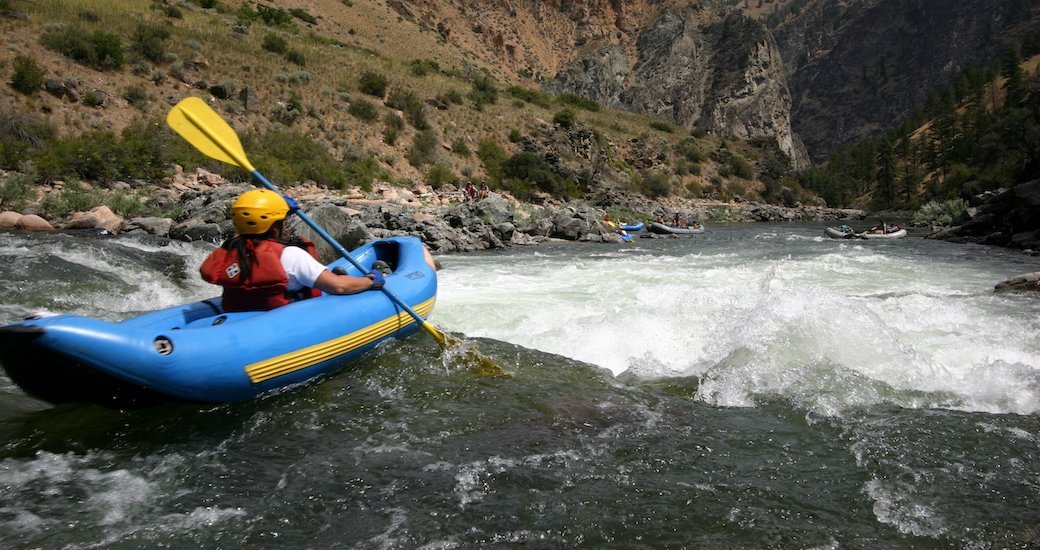 An inflatable kayak provides more stability than you might think, because it has a wider base than a traditional kayak.

You’ll sometimes hear an inflatable kayak referred to as “soft-shell.” Traditional kayaks often are called “hard-shell” kayaks. We’ve compiled some of the differences between the two types of kayaks.

Some people find carrying a hard-shell kayak difficult, as you often must lift it over your head to carry it. The ability to slightly bend the soft-shell kayak simplifies moving it.

A hard-shell kayak often will weigh 30% to 50% more than an inflatable kayak. This becomes a significant difference if you’re solo kayaking and must carry the gear all by yourself.

"If you want to take your dog in your inflatable kayak, the PVC material will withstand the dog’s nails."
STAFF
BestReviews

The hard-shell kayak works better for use on the water, as the sturdiness of the hull glides well. That doesn’t mean a modern, inflatable kayak performs poorly. Newer soft-shell kayaks work perfectly well; they just don’t quite match up to hard-shell kayaks.

When using an inflatable kayak, you’ll have to take time to inflate it upon reaching your launch site. A hard-shell kayak will be ready to use as soon as you arrive.

Often, a  hard-shell kayak must be attached to a rack on top of a vehicle for transportation. Some may fit in a large van or truck. Meanwhile, an inflatable kayak can be folded down and squeezed into a carrying bag or backpack. This means you can place the soft-shell kayak into a car trunk, or even carry it while riding a bicycle or motorcycle.

An inflatable kayak folds down to fit in a bag after use, allowing for storage in a closet. Hard-shell kayaks occupy significant storage space in a garage or basement.

Although an inflatable kayak appears rather simple in design, you actually have quite a few features from which to pick. You may have to pay a bit more for some of these features, but they’ll help with your enjoyment of the hobby.

A closed-design kayak has an enclosed cockpit, where you slide your feet and legs inside the body of the kayak. When paddling during cold weather, this design works great to keep cold water off your legs.

An inflatable kayak with a hybrid design combines elements of a traditional kayak and a canoe. This type of kayak features a long and narrow design, with seats attached to the bottom of the boat. It includes high walls that prevent water from splashing into the boat. Such hybrid designs often have two or more seating areas.

Did you know?
An inflatable kayak usually contains two or three separate air chambers, making it difficult to sink with one leak.
STAFF
BestReviews

An inflatable kayak design that’s open means your entire body fits on the top part of the kayak. People can climb in and out of an open design kayak easily, but splashing will soak your legs. Some open kayaks include a skin you can use to cover your legs.

A sealed kayak does not allow water to automatically exit the boat. You’ll have to bail this type of kayak by hand. Use sealed kayaks on calm, open water, such as lakes, where big waves and splashing don’t occur often.

A self-bailing, inflatable kayak allows any water that enters the boat to automatically release. The sides of the kayak contain ports that open whenever the boat has water in the bottom. These ports may allow some water into the boat, too. This type of kayak is most often used in rough rivers, and for whitewater kayaking, where you’re going to be wet anyway. Self-bailing kayaks don’t tend to glide as well as sealed kayaks on large bodies of open water.

Inflatable kayaks are available in many different lengths. They’re measured from front to back. Rather than list the dozens of exact lengths, we’ve simplified things, comparing long and short kayaks. Think about how you plan to use the kayak, as we’ve outlined below, and you’ll have better success picking the right length for your needs.

Select a long inflatable kayak if you want a model that glides easily through the water. Longer kayaks are best used on a large body of water, such as a lake or the ocean. A longer kayak easily accommodates two or more people, as well as allowing you to carry gear for overnight trips.

Did you know?
If you’re looking for a racing kayak, inflatable kayaks are slower than hard-shell traditional kayaks.
STAFF
BestReviews

Pick a shorter kayak if you're primarily planning to use it on rivers and in whitewater.

A shorter kayak may only offer one seat, although you should be able to fit your dog in with you.

You don’t have to work as hard to propel a short kayak as you would a long kayak.

You will find inflatable kayaks ranging from a couple of hundred dollars to a couple of thousand dollars. Kayaks designed for both whitewater use and open water use are available in any price point. We’ll discuss some of the key differences in each price range.

"To clean an inflatable kayak, just rinse it with a garden hose and dry it with a towel, or hang it to air dry."
STAFF
BestReviews 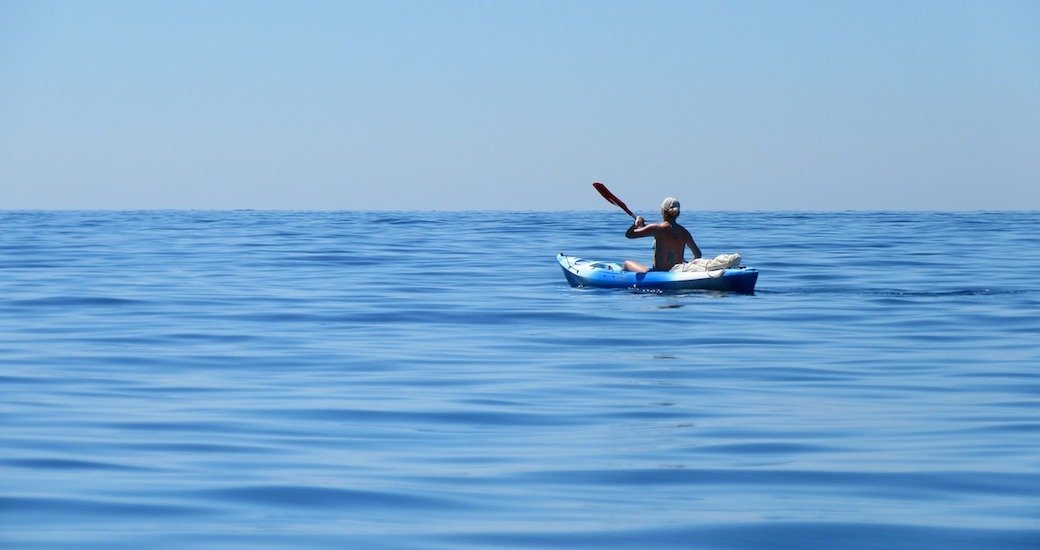 You can safely use an inflatable kayak for fishing as well as paddling, as long as you follow water safety rules.

Q. Do I have to worry about punctures with my inflatable kayak?

A. Inflatable kayaks are made from strong PVC fabric, sometimes military-grade materials. Manufacturers design these materials to be flexible, but also extremely tough. They usually build multiple layers into the inflatable kayaks, meaning you’d have to puncture more than one layer of material to create a hole. Consequently, puncturing the kayak during normal usage doesn’t occur easily, but could happen if you’re not careful.

Q. How difficult is it to fold up the kayak for transportation?

A. As long as you remove all of the air from the kayak, it will fold easily. Some people will squeeze all of the air out manually, using the valves. Others may reverse an electric air pump and suck the air out of the kayak. Either way, completely removing the air is the key step.

Q. What parts of an inflatable kayak tend to show wear first?

A. Closely watch the areas around the kayak’s valves for leaks. You might see leaks near seams in the material, too. These represent weak areas of the kayak. Avoid dragging the kayak on the ground, whether inflated or deflated. This can cause wear on the materials, and that could lead to a leak.

Q. If I believe my inflatable kayak has a leak, how can I check for one?

A. Look for a leak in an inflatable kayak using the same technique you’d use to find a leak in a bicycle tire. Prepare a mixture of water and dish soap in a spray bottle. Inflate the kayak fully. Then spray the soapy liquid over the kayak, starting with the areas where you suspect the leak. If you see bubbles forming through the soapy material, you have a leak. You can use patches or glue to fix leaks in inflatable kayaks. 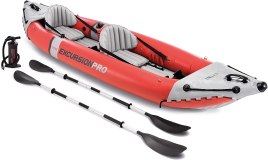 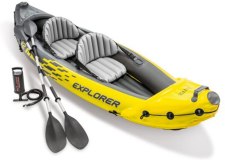 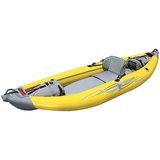 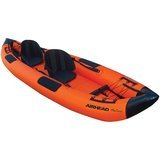 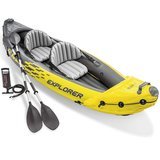