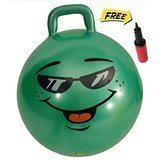 Bounces into first place with its tough construction, cute design, and wide variety of sizes that the whole family can enjoy.

Thick walls can take a beating from energetic kids. Neutral color and emoji print is suitable for boys and girls. Free of banned phthalates. Comes with a hand pump. Easy to inflate and deflate. Available in multiple sizes for all age groups, including adults.

This affordable hopper ball is extensively tested for quality and boasts some unique features that many pricier models can’t match.

Some owners report size inconsistencies when inflating 2 hoppers of the same measurements. 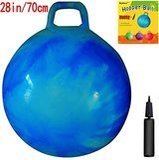 This large hopper ball has a generous maximum weight capacity, making it a solid option for big kids, teenagers, and adults.

Large diameter and a weight capacity of up to 300 lbs. is ideal for big kids or the young at heart. Suitable for indoor and outdoor use. Easy to inflate with the included hand pump. Robust enough to withstand some abuse. Complies with ASTM safety standards.

Too large for smaller children. 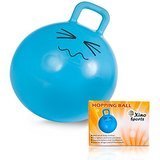 These vibrant hopper balls are great for indoor use, but might not hold up as well outside.

Cute print is gender-neutral and appeals to kids of all ages. Holds up to 170 pounds and accommodates kids of varying age groups. Withstands regular, energetic play. Comes with a 60 day money back guarantee.

Doesn’t come with a pump. Not recommended for outdoor use.

Pricey, but with a variety of unique colors and patterns, little ones will be bouncing in standout style. Choose it for smaller kids if aesthetics are a priority.

Stands out from the crowd with multiple kid-friendly prints and colors. Vinyl construction is strong and durable. Size is ideal for kids under the age of eight. Features an easy-grip handle and lightly textured bottom for improved stability. Holds up to 100 pounds.

Expensive and no size options for older/taller kids.

Essentially large exercise balls with handles on top, hopper balls are fun for folks of all ages. Just sit on your hopper ball and bounce to your heart's content. You might want your child to experience the excitement you had as a kid, flying around on your hopper. Or perhaps you're searching for a more enjoyable way to exercise.

Hopper balls go by many names — space hopper, hippity hop, and hoppity hop are just a few on this list. But whatever you call them, you'll need to make sure your chosen model has all the features you require. Arguably the most important factor to get right is the size. If it's too big or too small for the user, they won't be able to bounce properly. For purely aesthetic reasons, you may want to pay close attention to the design — luckily you'll find a huge range of options.

This guide will help you figure out which features matter to you. We've also listed our favorite hopper balls for you to check out. 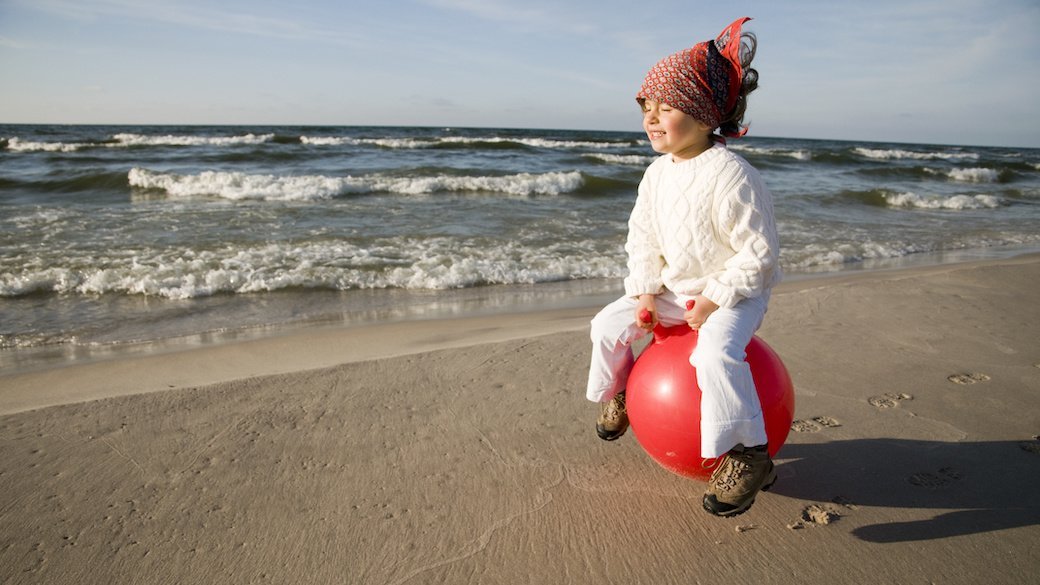 Hopper balls are a fun way to get moving, no matter what age you are.

Size definitely matters when you're choosing a hopper ball. If your chosen model is too large for the user, their feet won't reach the floor when sitting on top, making it impossible to bounce. If it's too small for the user, their knees will bend at an uncomfortable angle, and pushing off from the ground will be a challenge. Luckily, it's fairly easy to find the right size of hopper ball according to the age of the user. Of course, this is a rough guide and won't be accurate for everyone, especially people who are taller or shorter than average for their age. The size measurement of a hopper ball is generally given in inches and is the diameter of the widest point of the ball.

When they were first designed, hopper balls were made from either natural or synthetic rubber, but today they're more commonly made from PVC. Hopper ball material should be thin enough that it's lightweight and gives you plenty of bounce when inflated, but thick enough to withstand some punctures and hold the weight of the user.

It's important that the user doesn't exceed the maximum weight limit of their hopper. It will only be safe up to its weight limit — if someone heavier attempts to bounce, it could burst and cause an injury. Hopper ball weight limits are usually higher the larger they are, which is another reason why you should avoid using a model that's too small for you — so, no stealing your child's hopper ball for a bit of fun! Weight limits can range from less than 50 pounds for toddler models to more than 300 pounds for adult models.

Inflate your hopper ball as much as possible without risking bursting it. If it has too much give, the user will sink in, making bouncing a challenge.

That cool tie-dye pattern won't make your hopper ball move faster or bounce higher, but hoppers are supposed to be fun, and part of that fun is bouncing around on a hopper that you love the look of. This is especially important for kids and might mean the difference between it becoming your child's favorite toy and it being discarded after a couple of uses. Luckily, you can find hopper balls in all kinds of designs, from solid bright colors to Disney character prints to outer space designs, so you're bound to find an option that you (or whoever you're buying for) will love.

Original hopper balls had two separate handles sticking out of the top of the ball. Since these classic designs usually had faces on the front, these handles looked like ears or horns. With modern hoppers, it's much more common to have a single looped handle, which tends to be easier to keep a proper grip on than separate handles, especially for young kids.

It's fairly common for hopper balls to be sold with a pump included for easy inflation.

What should you expect to pay for a hopper ball, and what will you get for your money?

You can find some basic hopper balls for less than $10, but these will be small in size and may not be especially durable.

Mid-range hoppers cost around $10 to $20. You can find some solid kids' hoppers in this price range that should be tough enough to last.

High-end hopper balls are priced between $20 and $30. The majority of options in this price range are sized for adults, but you can find some extra-rugged kids' hopper balls here as well.

If you position the handle out of the way, you can use a hopper ball for sitting on, much like people do with exercise balls.

Some hopper balls include a puncture kit to fix up any small holes or tears that might appear.

If none of our top hopper balls meet your requirements, you can find plenty of other solid choices. We discovered these excellent hoppers during our research, and any of them would be a wise purchase.

The Kiddy Up Hopper Ball is a small 15-inch option that's best suited to under-fives. Although the small size limits who can use it, it's both durable and affordable. The Hippity Hop Space Hopper has a slightly larger 18-inch diameter, which is recommended for ages three to six. It's available in several colors and includes a small pump for easy inflation. What’s more, the textured handle is easy to grip.

If you want a larger-still option, the GreEco Space Hopper Ball has a 22-inch diameter and is recommended by the manufacturer for ages seven to nine, though some tweens and younger teens may find it fits them well enough. Finally, if you're a grownup in search of a hoppity hop for yourself, consider the WALIKI Hopper Ball for Adults. Not only is it a durable, high quality option, the tie-dye design leans into that vintage vibe inherent with hopper balls. 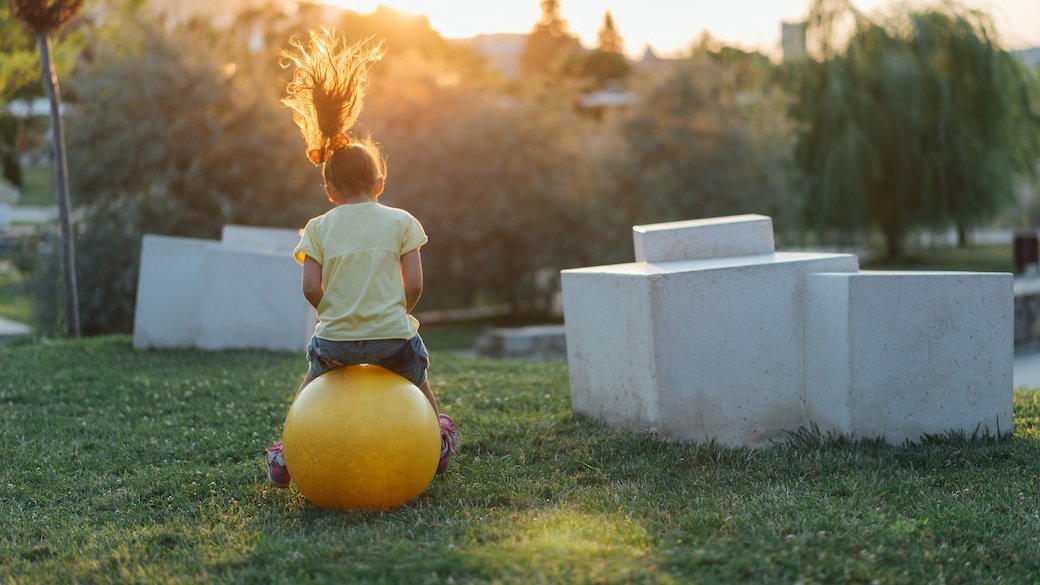 Keep your kids entertained for hours with hopper ball races or obstacle courses.

Q. When were hopper balls invented?

A. Hopper balls were invented in the 1960s by Aquilino Cosani, who worked for an Italian rubber ball manufacturer. The idea was patented in 1968, and the first hopper balls appeared in the United States that same year, sold under the brand name Hoppity Hop. They made it to the United Kingdom the following year, 1969, sold as Space Hoppers, and a trend for these toys quickly took hold. They were so popular in the subsequent few years that they're often considered an iconic part of the 1970s.

A. Hopper balls might be primarily marketed at children, but they're certainly not just for kids. As we mentioned, you can find different sizes of hopper balls and models with differing weight limits, so there's no reason why an adult can't use a hopper if they choose the right size.

Q. How do you inflate a hopper ball?

A. You can inflate a hopper ball with a hand pump, foot pump, or even an electric pump, assuming your pump has the right attachment to fit in the valve. That said, hopper balls aren't especially huge (particularly those models designed for young children), so the majority of healthy adults can manage to blow one up using lung power alone.

A. Who said exercise had to be boring? Using a hopper is certainly a decent workout. Hopper balls strengthen a range of muscles, including major leg and arm muscles and abdominal muscles. Plus, they raise the heart rate, making them a great form of cardiovascular exercise, too. They're also often used by occupational therapists and other healthcare professionals to improve balance and vestibular orientation in kids. 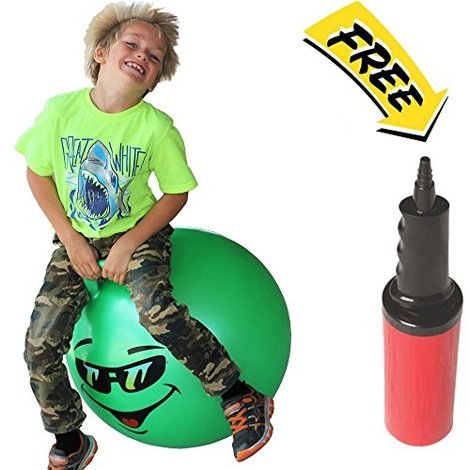 Bounces into first place with its tough construction, cute design, and wide variety of sizes that the whole family can enjoy.

This large hopper ball has a generous maximum weight capacity, making it a solid option for big kids, teenagers, and adults. 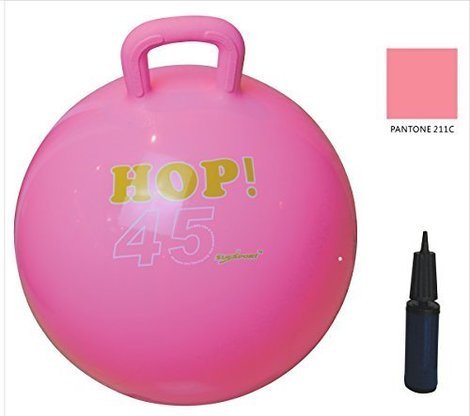 This affordable hopper ball is extensively tested for quality and boasts some unique features that many pricier models can’t match. 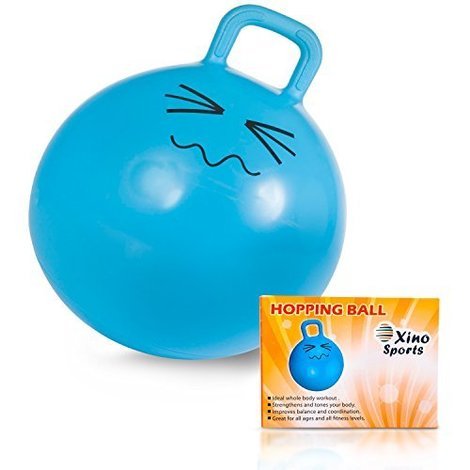 These vibrant hopper balls are great for indoor use, but might not hold up as well outside. 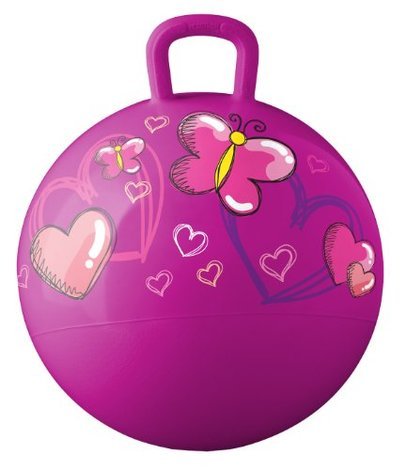 Pricey, but with a variety of unique colors and patterns, little ones will be bouncing in standout style. Choose it for smaller kids if aesthetics are a priority.