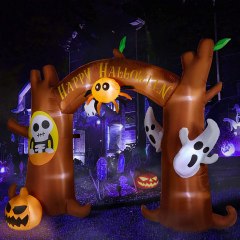 The silly and spooky elements of this large inflatable archway make it a standout choice for yard decoration.

A brown, tree-like archway with other attached designs, such as ghosts, pumpkins, and skeletons. Has LED lights that can be changed to different colors. The built-in blower is easy to operate and doesn't take long to inflate. Comes with 10 plastic stakes, 2 aluminum stakes, and 4 ropes for safely securing to the ground.

Not the most weather-resistant or durable inflatable, according to a couple of reviews. 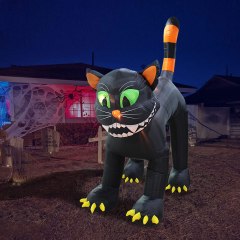 This large cat has an animated head that rotates from side-to-side and has built-in lights for a glowing look.

Measures 11 feet tall. Comes in a black color and features other fun Halloween colors, including an orange striped tail and green eyes. Stakes, tethers, and a blower are included.

Tends to fall down in windy weather. Head often gets stuck. 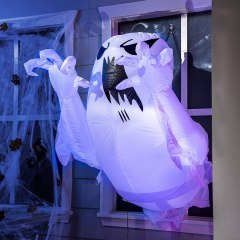 An inflatable ghost that hangs out of the window and lights up for a scary yet fun 3D effect.

Setup is simple and inflation is quick. Comes with fastener ropes, built-in sandbags to keep it from flying out, and suction cups for securing to the window. Has a bright white LED light on the inside of the ghost. Holds up throughout the Halloween season. Measures 3.5 feet tall.

A few customers mentioned making some modifications to making it more secure. 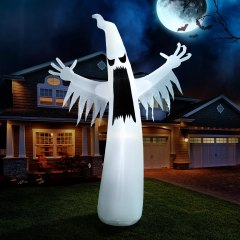 A ghost inflatable with a spooky design that measures 12 feet tall and lights up at night.

Comes with all the items for keeping the inflatable secure and in place, including built-in sandbags, ropes, and stakes. Cord reaches up to 10 feet. Built-in LED lights show up at night, and the durable design can sustain wind and rain.

The blower fan tends to stop working after a few hours. 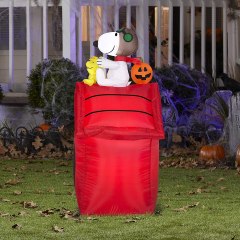 This Peanuts-themed decoration is cute and festive and can be used throughout the fall season.

Features Snoopy, Woodstock, and a happy pumpkin on top of a doghouse. Can be used inside and outside. Measures 3.5 feet tall, and the smaller design can be easily deflated and stored until next year. Comes with stakes and tethers.

Not as bright as expected.

Fake cobwebs and jack-o-lanterns can add spooky charm to your home, but Halloween inflatables are far easier to set up and have a dramatic effect.

Halloween inflatables range greatly in height, size, and style, coming in the forms of huge archways made of pumpkins, looming witches with bubbling cauldrons, and lots of other festive tableaus. Because the styles of most inflatables are fairly similar, you can add several to your home or yard, and they will likely fit together well. Some Halloween inflatables include fun extras, such as lights and sounds.

By choosing a theme you like and strategically placing your inflatable in your yard or on your porch, you can give trick-or-treaters a thrill while enjoying your decoration throughout the fall. 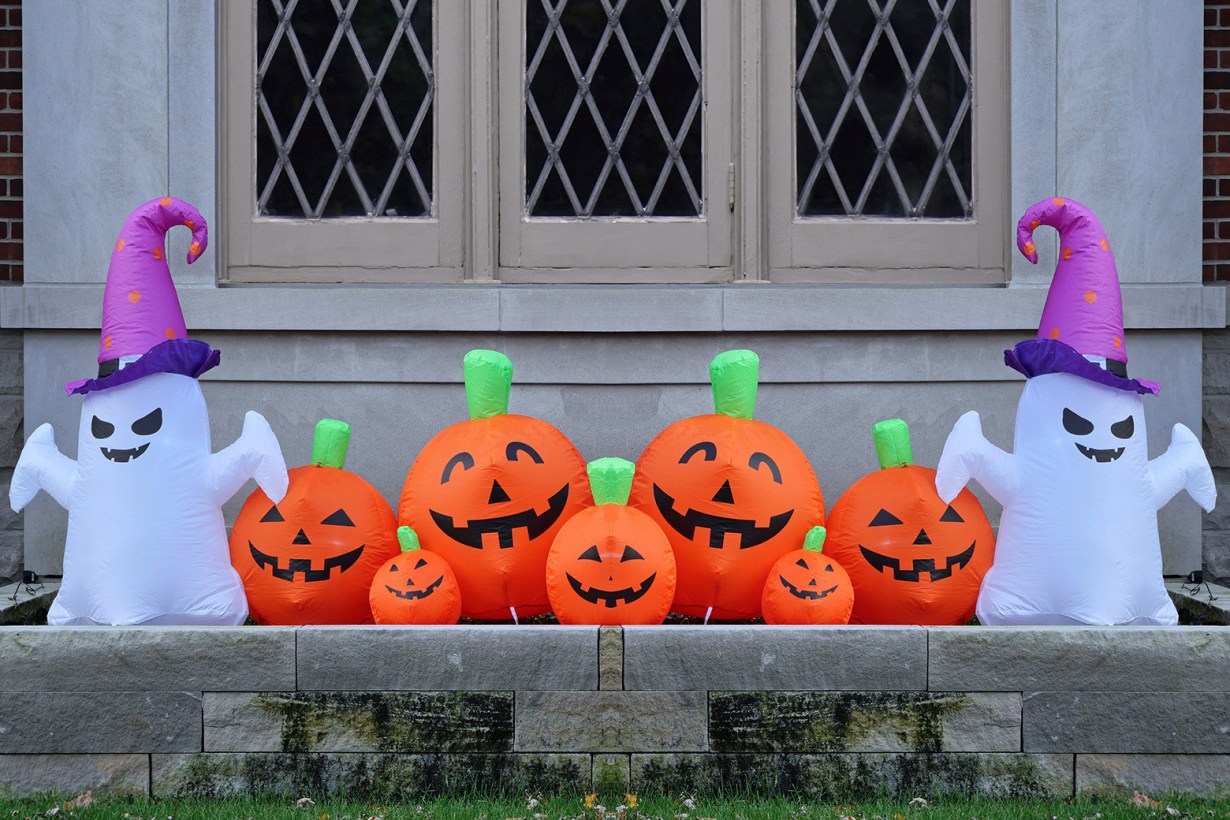 Give your inflatables room to move in the breeze. If there are trees or walls nearby, they could brush against them and pop.

How to buy the best Halloween inflatables

While the styles of most inflatables are similar—cartoonish and spooky without being grotesque—they come in an astonishing array of sizes, designs, and themes.

What size Halloween inflatable do you want?

Halloween inflatables range in height from around 3 feet to 12 feet. Taller inflatables can have an imposing and eye-catching effect, but taller doesn’t always mean bigger. Some inflatables in the 4- to 6-foot range are wide in design, taking up a lot of space on your lawn or porch. Larger inflatables are usually more expensive, and sometimes, you can get a couple of smaller ones for the same price as a tall inflatable.

Halloween conjures thoughts of many different spooky characters. Pick a theme that you enjoy and that goes well with any other Halloween decorations you have.

In addition to fun characters, inflatables also come in the shape of archways and other unique designs.

Archways work well if you have a path leading to your front door so that trick-or-treaters can pass under jack-o-lanterns, tree branches, or the outstretched arms of a monster. Some have hanging strips of fabric for people to pass through. Choose an archway that’s tall enough for people to walk under comfortably. Most manufacturers list the height of the top of the arch, but the height of the inside of the arch is more important to consider.

Other less-common designs include monsters that pop out of windows and groups of characters or objects that sprawl across a large area. 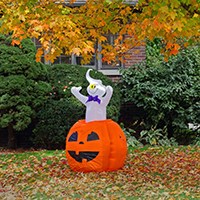 DID YOU KNOW?
Halloween inflatables can be combined with other decorations to complete the scene, like fake cobwebs, pumpkins, or cauldrons.
STAFF
BestReviews

What features do Halloween inflatables have?

There’s more to your decision than picking a theme and design you like. You should look carefully at the quality of the design and additional features, such as lights and sounds.

You probably plan to leave your Halloween inflatable up for long stretches, including when you are not home. By choosing an inflatable made of durable materials with plenty of tethers, you can avoid coming home to a disaster.

Stability becomes a major factor the taller an inflatable is. Note the number of included tethers and stakes.

If you want your decorations to be visible at night, you’ll either need robust landscape lighting or an inflatable with LEDs. While LED inflatables cost a bit extra, the LEDs inside fill your decorations with light—which not only looks good but also provides light for visitors and trick-or-treaters. LEDs are typically long-lasting, though some models may use incandescent bulbs, which are less expensive but may burn out with heavy use.

Other flashy options include animated inflatables and inflatables with speakers to project music or eerie voices. Some inflatables have wings or arms that move constantly… and while this is far from lifelike, it’s an entertaining effect. Built-in motion sensors can trigger voice lines or music, which is not only useful for keeping noise to a minimum but also for startling trick-or-treaters.

If you plan to put your inflatable on your porch, measure the height of the ceiling to make sure it will fit. Otherwise, your creepy creature will be slouching.

How much do Halloween inflatables cost?

Halloween inflatables are more expensive than most smaller decorations, but they are relatively easy to set up. Budget inflatables are smaller and simpler, while pricier options tend to sport additional features and may be larger in size.

Between $30 and $50, you can find inflatable Halloween decorations that vary in size but typically have basic designs, such as a giant eyeball or a humanoid character. In some cases, the polyester may be on the thin side, and fan power can be underwhelming. Not all inexpensive Halloween inflatables include tethers and stakes. Despite the low cost, built-in LEDs are common in this range.

Halloween inflatables that cost $50 to $100 typically use high-quality polyester and come in a variety of designs. LEDs are standard, and designs range from tall archways to multi-character inflatables that dominate a small space. Extras like sound and animation are also available for this cost, and many inflatables are waterproof. 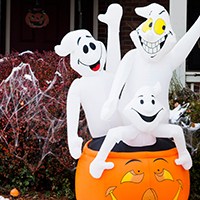 DID YOU KNOW?
Halloween inflatables swaying in the wind is a feature, not a bug. Movement adds a bit of realism, whether it’s a ghost, a tree, or a vampire.
STAFF
BestReviews

Careful setup and proper storage are key to extending the lifespan of your Halloween inflatable. 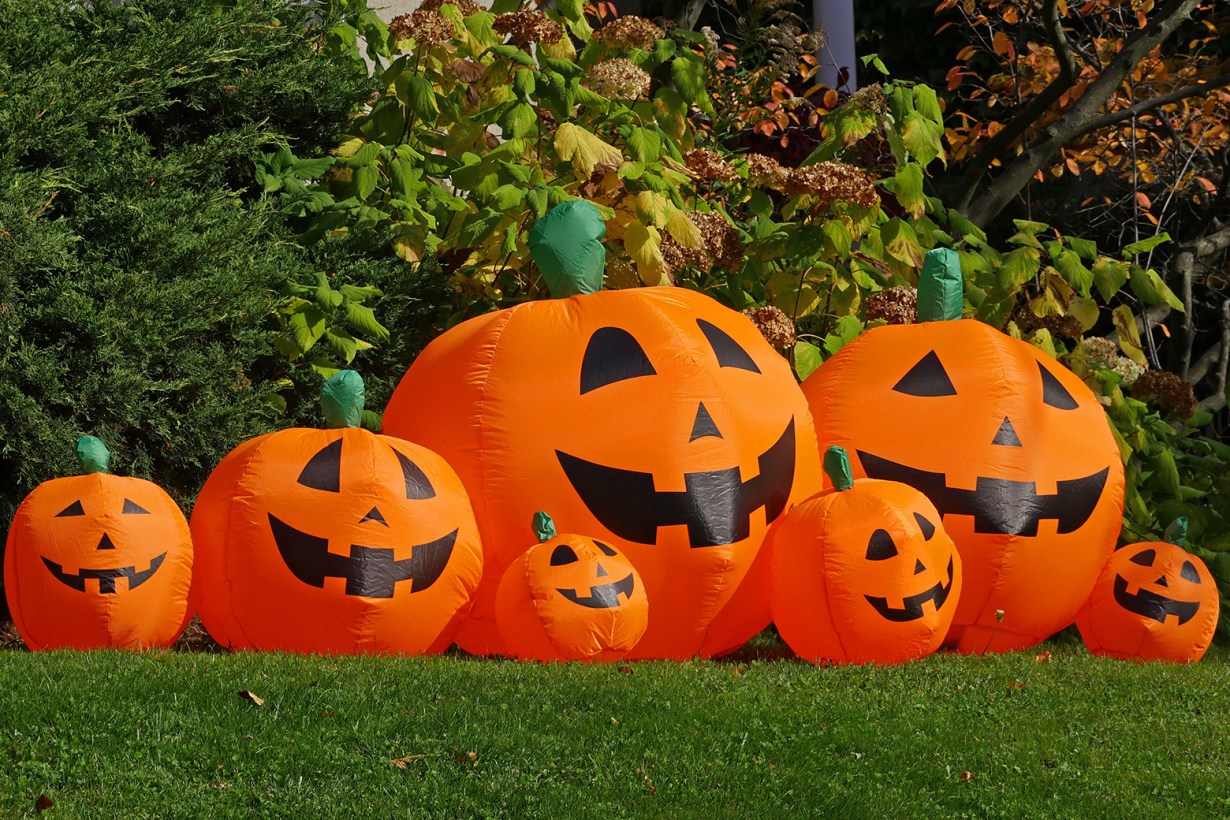 When placing your inflatable, think about whether it will block your line of sight when leaving your driveway or if it will block any windows.

Q. Do I have to keep the fan running constantly?

A. Since a high amount of pressure would be required to keep an inflatable filled without a motorized fan, Halloween inflatables are not designed to be airtight. However, running the fan all the time is not a good idea, as it can strain the motor and even cause it to overheat. Choose a time of day when you want your inflatable to be displayed, and keep it turned off the rest of the time. Deflated decorations can be unsightly, so consider dragging it somewhere hidden when it’s not in use.

Q. Can you put inflatables indoors?

A. Yes, but their blowers can be a bit noisy. It’s also difficult to tell how wide a fully inflated decoration will be until you see it in person.

Q. How durable are inflatables?

A. Mid-range and expensive Halloween inflatables are made of fairly durable fabric. The best way to tell how long an inflatable will last is to check for an IP rating of IPX4 or higher.

A. First, check to see if the motor is running. You should hear a fan-like sound. If it isn’t running and is plugged in and turned on (and the outlet is working), the motor may be broken, or a fuse may have blown. If the fan is running, make sure the fabric has no folds that could cut off airflow. If it still isn’t inflating, make sure there are no open zippers on the inflatable.