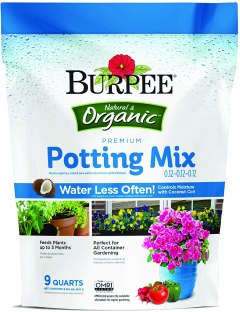 An organic potting mix made by one of the most well known names in plant seeds.

This mix has superior moisture retention, making it excellent for germinating seeds. Doesn't have to be broken down like coir bricks. Lightweight and easy to use. Enriched with Burpee plant food to help keep your plants healthy.

More expensive online than it is in many stores.

A soil mix that’s ready to plant in as soon as it’s poured.

Incorporates light, absorbent materials that keep the soil damp without compacting. Added fertilizers feed most plants. Ideal for outdoor container gardening. You get a good amount of soil for the price.

May be too light and porous for some plant varieties. 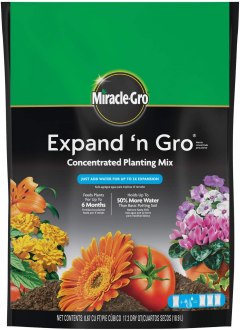 This powerful planting mix takes up less space than other mixes and offers excellent water retention.

Expand 'n Gro expands up to 3 times its size once you add water. Because the soil is compacted, it will take up less room in your shed. The added plant food and top-notch water retention are great for most plants.

Many customers reported finding plastic fillers in their bags.

This soil mix is loose enough for roots to take hold without being too light or fluffy.

Soil tends to compact when used in outdoor pots. 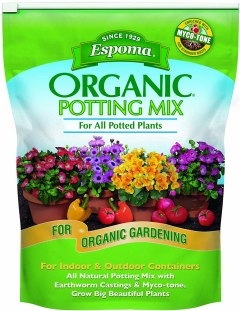 This mix is perfect for germinating seeds. Packed with earthworm castings and a Myco-tone formula that helps retain water. An excellent choice if you're looking to avoid sterilized soil or pesticides.

Many users reported finding fungus gnats in their bags.

When it comes to gardening, dirt is dirt and it doesn’t make that much difference what fills your containers, raised beds, vegetable plot, or flowerbeds, right? While many beginning gardeners make that assumption, the reality is that the proper type of soil can make the difference between a healthy, productive garden of any type and a garden filled with plants that fail to flower, produce crops, or even survive.

But because gardening centers are filled with a wide variety of bagged soils used for different purposes, it can be a little tricky to choose the one best suited to your purposes. And unless you are lucky enough to have a garden naturally filled with rich, loamy soil, chances are good you’ll need to purchase at least one bag of soil before planting new greenery or refreshing existing garden beds. But do you need garden soil? Potting soil? Topsoil? Here’s what you need to know about choosing and using the right soil or amendment for your garden. 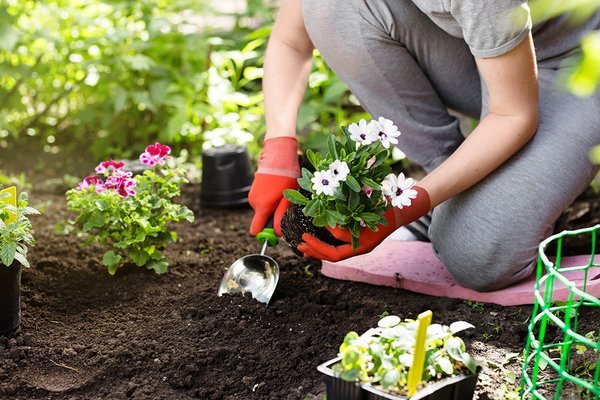 Garden soil is used to amend the existing dirt in your garden beds.

What kind of dirt do you have?

Dirt, or soil, is composed of several ingredients including sand, silt, clay, water, and decaying organic materials such as fallen leaves and other plant materials as well as dead insects and other animals. Typically, dirt is also home to a wide variety of living organisms including bacteria, viruses, molds, insects, crustaceans, and worms.

While every gardener dreams of a garden naturally filled with rich, healthy loam, which is a mixture of sand, silt, and clay in balanced proportions — the ideal loam is roughly 40% silt, 40% clay, and 20% sand — along with nutrient-rich decaying organic material, the reality is that most gardeners deal with soil that is imbalanced.

But whatever type of soil you have in your garden, it can be improved with the addition of the right supplement or contrasting soil type. Commercial garden soil is often used for this purpose.

Looking over the many types of bagged soil at the local home improvement center, you might wonder what the difference is between them.

Garden soil: Bagged garden soil is a blended soil containing the three basic components — sand, clay, and silt — as well as compost, which is nutrient-rich decaying organic material along with other supplements that increase the richness of the soil. Garden soil is for amending your existing garden dirt, not for filling raised beds or containers. Garden soil helps balance clay or sandy soil, improves drainage, and adds vitamins and other nutrients important to plant health.

Potting mix: This is soil formulated for use in containers. It’s designed to drain well yet hold on to enough moisture for healthy plant roots, and it contains lots of compost and other healthy organic materials.

Raised bed mix: Designed for use in raised beds that sit on top of native soil, raised bed mix is somewhere between bagged potting mix and garden soil in terms of its composition.

Topsoil: Not formulated for planting, topsoil is used to fill or level holes or other depressions in the ground.

Compost: A blend of decaying organic materials, compost is used to improve the quality of any type of soil by adding nutrients, balancing soil composition, and increasing drainage.

Specialty soils: There are many specialty soils for specific types of plants. Examples include cactus/succulent soil, orchid soil, lawn soil, and vegetable bed soil. These are formulated to best support specific plant needs, not for general purposes.

Mulch: There are many types of mulch, both organic and nonorganic, but all are used as topdressings to maintain soil temperature, reduce weed growth, improve the appearance of the garden, control evaporation, and protect plant roots from freezing temperatures. Organic mulches also add nutrients to the soil as they break down. 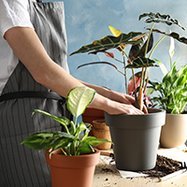 Did You Know?
Don’t confuse bagged garden soil with potting soil. Potting soil is for use in containers, not in the ground.
Staff
BestReviews

Choosing garden soil isn’t complicated, but there are a few garden soil features to consider before heading to the garden center.

Organic: While it might cost a little bit more, it’s worth it to buy organic garden soil, particularly if you are going to use the soil to improve the ground where you’ll be planting vegetables, herbs, or fruits. Organic garden soil doesn’t contain chemical fertilizers, pesticides, or other ingredients that could potentially be harmful to your health or the health of the environment.

Water-storing: While more often a feature of potting soil, there are garden soils that contain “crystals” (typically made from polymers) that swell up when exposed to water, then slowly release that water as the soil dries. This helps keep your plant roots happy and hydrated, and it is a useful feature if you live in an arid climate or just don’t want to have to water as often.

Enhanced drainage: Another feature most often found in potting soil or specialty soils, garden soils formulated for enhanced drainage typically have a bit more sand or other additives that allow water to drain faster than average soil. This is useful if your native soil contains a lot of clay or if you want to grow plants that struggle if their roots remain too wet.

Fertilizer: Many brands of garden soil include slow-release granular fertilizers that slowly dissolve over weeks or months to keep your plants green and healthy. These also reduce the need for you to apply additional fertilizer.

Tree/shrub: These garden soils are for use when planting a new tree or shrub. They typically have ingredients that help control moisture in the soil to prevent root rot or wilting while the tree establishes its roots, and most also have extra fertilizer or compost to boost tree growth and health.

Clay soil: Some garden soils are formulated with extra gypsum, which is a mineral that helps improve clay soil texture and increases drainage.

When adding garden soil, aim for at least 2 inches of cover over the existing dirt.

You won’t need to spend a lot on garden soil. The most common bag size is 2 cubic feet, which covers approximately 12 square feet if you are spreading the garden soil to a depth of 2 inches over the area. As a general rule, you’ll spend between $5 and $9 per bag for garden soil, with organic products or garden soils containing added fertilizers towards the higher end of that range. 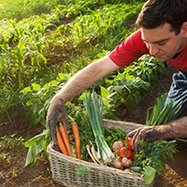 Did You Know?
Organic garden soil is best if you are growing vegetables or other food crops.
Staff
BestReviews

Wondering what kind of native soil you have in your garden? There are two easy ways to find out.

The simplest way to determine what kind of dirt you have is to feel it. Grab a handful of dam, not muddy, soil and squeeze it in your hand. If it forms a sticky ball, it’s mostly clay. If it feels gritty and won’t hold a shape, it’s sandy. Silty soil is somewhere between these two extremes and often has a slightly soapy feel.

The results are the rough percentages of your soil’s components. For example, if the bottom layer of sand measures 2 inches, the middle layer of silt is 0.25 inches, and the top layer of clay is 0.5 inches, you have a total of 2.75 inches. Dividing each individual measurement by 2.75 gives you a rough estimate of your soil’s composition. In this example, the soil is around 70% sand, 10% silt, and 20% clay, so it’s fairly sandy soil that would benefit from the addition of garden soil containing plenty of mulch and loam. 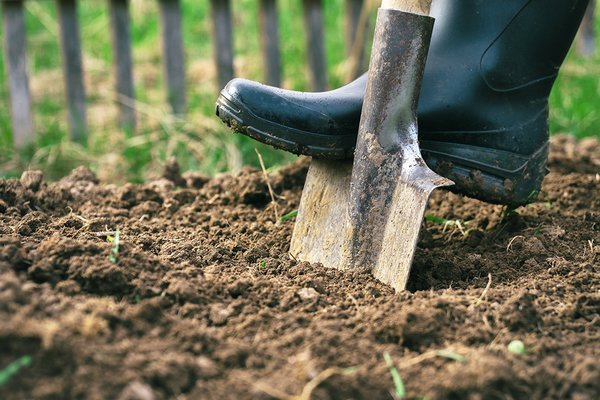 Q. Can I use garden soil to fill my flower pots or for repotting houseplants?

A. Not if you want your plants to thrive. Garden soil is formulated for the ground, where there’s plenty of space for water movement. Used in a container, garden soil tends to compress and prevent good water drainage, leading to rotted roots.

Q. Is it really worth spending a little extra for organic garden soil?

A. While not essential, the cost difference is fairly small, and unless you are buying a very large quantity of garden soil, it’s generally worth it to buy organic. Without synthetic pesticides or fertilizers, your garden will be a friendlier place for earthworms and other beneficial critters, and any food crops, such as vegetables or herbs, won’t be potentially tainted by chemicals from the soil.

Q. How do I know how much garden soil I need?

A. Get out your calculator because you’ll need to do a quick bit of math.