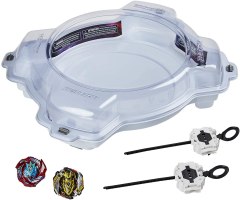 Everything you need for an easy to learn and exciting to master 2-player game of Beyblades.

A larger Beystadium is needed for 3 or more players.

An easy way to customize your favorite tops with a range of useful parts to win battles your way.

This collection is an expansion pack for players who know the basics and want to dive deeper into the game.

This sturdy option is likely to stay upright for longer than the competition.

Attack power is on lower side.

It's a top pick for newcomers and anyone who prefers to spin by the edges of the arena.

Optimized for climbing higher along walls of a Beystadium. Balanced across all stats. Features swappable parts. Cool snake-themed design. May burst during play. Includes launcher.

It’s hard to believe that the original Beyblade series of toys came out more than 20 years ago. Over the past two decades, the popularity of these battling tops has climbed and fallen and risen again. While many aspects have changed, the key features that make a quality Beyblade have remained consistent.

Before purchasing a Beyblade, decide what type of player you are and what type of Beyblade you want. Does your winning strategy depend on attack, defense, stamina, or balance? What types of designs do you like? How important is it for you to be able to customize your Beyblade? Do you need a launcher and a stadium, or are you just looking for another top? Do you plan on battling or just collecting these colorful toys?

If you have a lot of questions, begin by researching the different types of Beyblades, which features are most important, and get an idea of how much you should be spending when purchasing Beyblades. 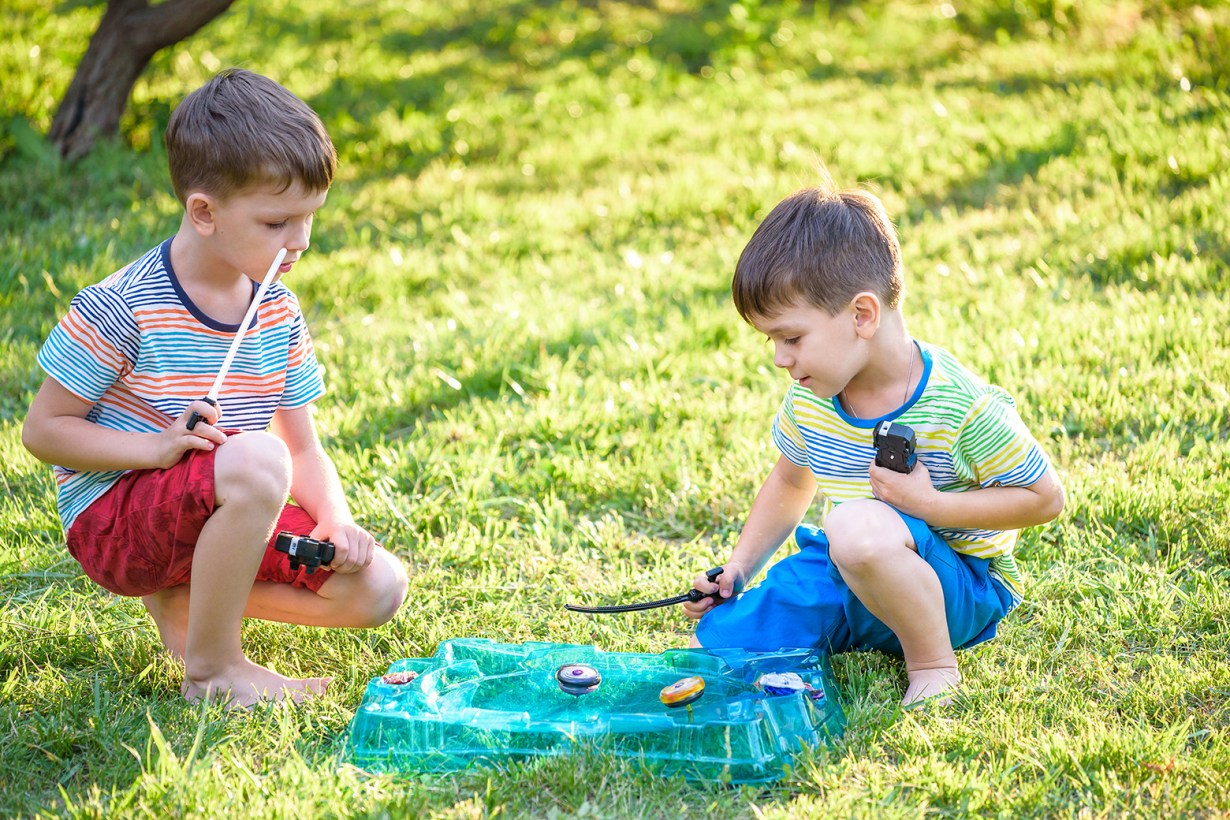 Official Beyblades are only made by Takara Tomy or licensed companies, such as Sonokong in Korea or Hasbro in North America.

How to buy the best Beyblade

Be careful of counterfeit Beyblades

When shopping for a Beyblade, you want to get an official toy. An unbranded imitation is a lower-quality item and features a less reliable build quality. If you’re purchasing for a child who just wants to play with their friends, this might be okay. However, a counterfeit Beyblade can’t be used in official tournaments.

The original Beyblades are manufactured by Takara Tomy of Japan. These are considered the highest quality. You can tell these Beyblades — even if they’re released under a different imprint — because they always have the "Takara Tomy" logo on them.

In North America, Hasbro is the licensed manufacturer. These Beyblades are quality items that are compatible with Takara Tomy Beyblades. These models are also easy to recognize because they have the “Hasbro” logo on them.

There are three generations of Beyblades

Over the years, Beyblades have evolved. There are three distinct generations: Original, Metal Fusion, and Burst.

Original: The original Beyblades, first released in 1999, are made of plastic. They’re rare and hard to find. Since they wouldn’t hold up well in a battle with more modern generations, these are mostly for collectors.

Metal Fusion: The Metal Fusion, or Metal Fight, series was released beginning in 2008. These Beyblades are highly desirable because of the incorporated metal wheel, but they’re no longer sold in stores.

Burst: The latest generation is Beyblades Burst. These are the models that are currently in stores. Besides being the newest version, these Beyblades have an exciting new feature: they can burst apart during battles.

Every Beyblade has different attributes. The four primary attributes that you’ll want to consider are attack, defense, stamina, and balance. If you’re a shrewd player, you can swap parts to customize your Beyblades to create a fleet that’s unstoppable.

If you want a snazzy Beyblade that lights up as it spins, the Beyblade Burst Rip Fire series has this capability.

If you want to customize your Beyblades to get an edge on your opponent, you need to purchase models from the same line to ensure the parts are interchangeable.

Having a high-quality launcher can make the difference between winning and losing a match. You need a launcher that spins in the same direction as your Beyblade — left, right, or both. Additionally, the launcher must be from the same generation as your Beyblade. To make matters simple, most Beyblade sets come with the appropriate launcher. However, you can buy multi-packs of Beyblades without a launcher or buy a launcher separately.

The tops and launchers are only two-thirds of what you need to have the most fun with these toys. To compete, you also should get a Beyblade stadium. While an inverted frisbee could work as a makeshift battlefield, the best stadiums have high walls and a smooth playing surface with a convex center. There is no official size or shape, but most are square, round, rectangular, or oval and range from roughly 14 to 20 inches long on the sides. Some stadiums feature built-in obstacles to make the battle more exciting and unpredictable. If you want it all, you can purchase a stadium that includes two Beyblades and two launchers. 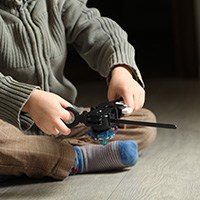 DID YOU KNOW?
The name “Beyblade” is derived from “beigoma.” A beigoma is a traditional Japanese top that makes a humming sound while it’s spinning.
STAFF
BestReviews

How much do Beyblades cost?

Inexpensive Beyblades cost roughly $8.99 to $11.99. These toys are best for beginners and might not hold up as well in battle against higher-priced models.

The serious Blader can find the top they need in the $16.99 to $24.99 range. These more aggressive “pro series” models offer a greater degree of customization and come with a better launcher.

Once you get into the $40 and up price range, you can expect a Beyblade stadium, two Beyblades, and two launchers. While this is the highest-priced option, it’s good for a beginner because it comes with everything you need for two players to have a battle.

When your Beyblade causes another Beyblade to burst (or separate) in battle, you’re awarded two points. In all other situations, the winner only gets one point. 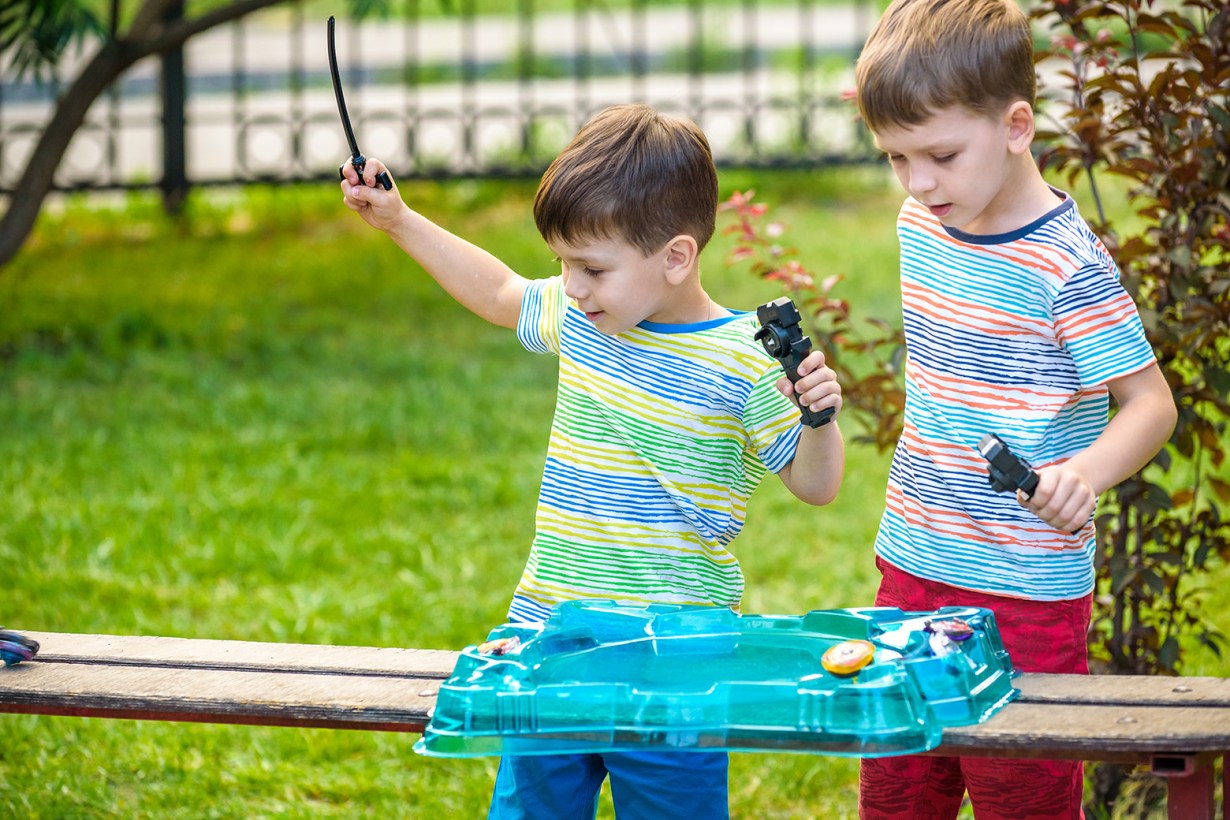 A. Although Beyblades look like they would be great for kids of all ages, parents are strongly cautioned to refrain from purchasing this toy for younger children. This is because Beyblades contain small parts that can pose a choking hazard. In the U.S., the toy is only recommended for ages eight and up.

Q. Are rare Beyblades worth a lot of money?

A. Like any collectible item, just because you have an old one doesn’t mean it’s worth a lot of money, if any. There are key factors that go into determining how much a Beyblade is worth: primarily how many still exist and the condition of the toy. That being said, the value of a Beyblade is remarkably low when compared to other collectibles, such as Pokemon cards. For instance, a rare Beyblade may be worth $200 to $300, while a rare Pokemon card in near mint condition could be worth thousands of dollars (or more). Before buying Beyblades as an investment, research the market. Also, be very cautious about buying overpriced counterfeits.

Q. How do you win a Beyblade round?

A. There are many versions of Beyblade tournaments and the rules may adapt slightly to consider the type of Beyblade and stadium being used. However, in general, the criteria for winning a Beyblade round are consistent. If your Beyblade stops spinning first, gets knocked out of the stadium, or bursts, you lose the round. Additionally, if a player launches early, late, or interferes with the active play in any way (including touching the stadium), that player loses the round. If both Beyblades stop spinning at the same time, get knocked out of the ring together, or burst apart at the same time, the round is considered a tie and no points are awarded to either player.

Q. How do you win a Beyblade match?

A. The first player to get three points wins the match.

Q. Are there still Beyblade tournaments?

A. Yes. The Beyblade community is alive and well. If you’re interested in competing, however, you’ll need to do a little research to find an event. If there are no events in your area, you can start your own local community, grow it, and host your own Beyblade tournaments. 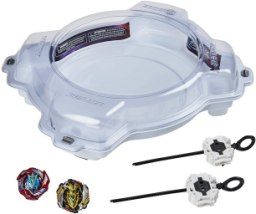 Best of the Best
Hasbro
Beyblade Burst Pro Series Elite Champions Pro Set
Bottom Line
Everything you need for an easy to learn and exciting to master 2-player game of Beyblades.
Shop Now

Best Bang for the Buck
Hasbro
Beyblade Burst Surge Speedstorm
Bottom Line
An easy way to customize your favorite tops with a range of useful parts to win battles your way.
Shop Now

Top Pick
Hasbro
Beyblade Burst Evolution Elite Warrior 4-Pack
Bottom Line
This collection is an expansion pack for players who know the basics and want to dive deeper into the game.
Shop Now

Top Pick
Hasbro
Beyblade Burst Rise Hypersphere Flare Cobra
Bottom Line
It's a top pick for newcomers and anyone who prefers to spin by the edges of the arena.
Shop Now