Two versions available, either .177 or .22 caliber. Smaller caliber offers 1,300 fps of muzzle velocity for excellent power. Less vibration when firing than some other air rifles. Lightweight weapon that's easy to carry and feels good to hold and use. Constructed with high-quality materials.

With its affordability and surprisingly strong shot, it is no surprise that Daisy’s most popular air rifle is also their best.

Its included scope is not particularly impressive.

Good results in an air rifle for the price you pay. Good build quality — feels solid in your hands.

Extremely easy to have success with this air rifle straight out of the box. Safety automatically engaged when you cock the gun. Makes use of .177 caliber ammo. Provides muzzle velocity of 1,000 fps. 4 x 32 scope included with the gun. Works well for small-size game.

Will want to upgrade to a better scope. Loud. Air rifle may be too heavy for some users, causing inaccuracy.

Stylish, and sports a solid overall performance, especially when you consider its price point.

Not the most durable air rifle on the market.

Versatile and powerful, Bushmaster’s MPW is easily the best automatic air rifle on the market.

Features automatic and semiautomatic firing modes. CO2 cartridges hidden in 25-round magazine. Easy-to-mount accessories. Shoots up to 1,400 rounds per minute.

This is a particularly pricey air rifle.

A good air rifle can be used for target practice, vermin control, and small game hunting. It is also an easy-to-learn, affordable, and low-risk introduction to gun sports.

You have enormous choice when selecting an air rifle – with different styles, calibers and firing mechanisms, it can be tough to make the right buying decision.

That's where BestReviews can help! Our top five selections offer a variety of performance and value combinations. If you're ready to buy, there are solutions here for the vast majority of shooters, at all experience levels, so check out our recommendations. 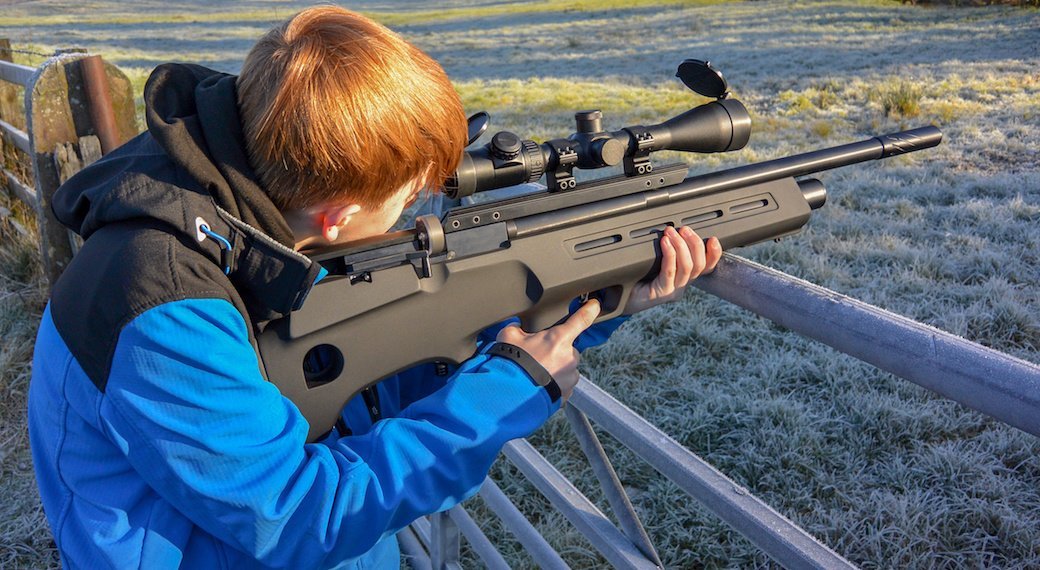 Most people think of air rifles as small-bore guns, yet the largest take a .50 caliber round. There are even

Before we look at choosing an air rifle, a quick note about safety.

Unlike a rifle bullet or shotgun cartridge, an air rifle pellet has no explosive charge. The projectile is propelled by pressurized air or gas. As a result, air rifles are considered much safer. They're not actually categorized as "firearms" at all.

Make no mistake, all air rifles – even low-power models – are dangerous. Treat them with the same caution you would any other weapon. There are many pleasures in air rifle shooting. There are none in a visit to the emergency room.

How an air rifle works

All air rifles work in basically the same way: air (or gas) is pressurized. Pulling the trigger releases pent-up energy, and fires the pellet down the barrel.

What differentiates each type of air rifle is the way the pressure is provided.

The choice of air rifles is vast. As we've seen, there are four basic power types. Then there are seven different calibers (from .177 right up to .50). We looked at more than a dozen brands, each of whom offer a massive selection of different sizes and styles.

It's not practical, or even sensible, to compare a low-power .177 pump-action with a .45 caliber PCP hunting model capable of taking down a wild boar. They’re designed for very different users. Therefore, within the space we have available, we're concentrating on the two most popular air rifle calibers: .177 and .22. Many of the principles in choosing the best air rifle of this kind are equally valid for other models.

Primary characteristics to consider include:

Muzzle velocity is measured in fps (feet per second). The higher the figure, the further the pellet will be fired. A .177 bore is smaller than a .22, and the pellet lighter. So, if both rifles apply the same pressure, the .177 will have a higher muzzle velocity and therefore a greater range. Of course, different air rifles apply different amounts of pressure, hence the variations you see in muzzle velocity. In terms of the numbers, higher is always better.

One note of caution. Some manufacturers quote muzzle velocity using special non-lead alloy pellets (PBA is a popular brand.) These fly considerably faster than standard lead-alloy pellets. They are readily available, so it's not a problem, but if you use “ordinary” ammo you won't achieve the same figures.

A few makers quote muzzle energy in fpe (foot pounds of energy). It's a calculation that takes into account the weight of the ammunition and should, therefore, offer more accurate numbers. The problem is, only a few quote it, so comparisons are practically impossible.

Cocking force has a number of different names. Essentially, it's the amount of physical effort required to cock a break-barrel rifle, or get a variable pump air rifle up to firing pressure. While it's not a major factor for a fit adult, it can be for younger people, or those with restricted strength. The same goes for trigger pull. Better manufacturers provide this figure, but many do not.

For casual shooters, length and weight are not significant considerations. However, a gun that's too long or too short can be uncomfortable. That's important if you're concerned about a high degree of accuracy, particularly if target shooting from a prone position. Too long an air rifle can also be a problem for younger shooters. Air rifle weight can vary by a couple of pounds or more. It may not seem a lot, but again, comfort depends on the physical attributes of the shooter.

Your air rifle's sights are obviously vital to accuracy. You'll have a fixed front sight and an adjustable rear, which should offer windage and elevation. On occasions, we found manufacturing faults with sights. They just couldn't be adjusted properly. It's unusual, but if it happens you need to return your rifle for an exchange.

Some air rifles come with scopes pre-fitted, others have the option to add one. The majority of those supplied with a rifle are 4x32, meaning they magnify four times normal view. That's a good choice for a general-purpose .177 or .22 air rifle. Coated lenses are a benefit. They reduce glare and can enhance your view.

Small caliber air rifles produce less recoil than firearms, and traditional hardwood stock looks great, but it will still wear on your shoulder after a while. A rubber bump pad or recoil pad adds long-term comfort.

Although the style of air rifle you choose has negligible impact on accuracy, it's still an important personal consideration. The variety is huge. There are traditional hunting rifle styles, others that mimic a suppressed sniper rifle, or other military or tactical styles. The choice is yours!

We didn't mention accuracy – which you might expect to be a high priority. It is, but there are many variables. Not least of these is the shooter. No two people shoot the same air rifle with the same degree of precision.

Of course some air rifles are inherently better than others. In general, you pay more for quality components and build, each of which improves performance. In all likelihood, the more you can afford to spend, the more accurate the air rifle you'll get.

What does a good air rifle cost?

There are some very cheap air rifles around, but please don't be tempted. Even if you're buying for a beginner, you need adequate performance. If they can't hit the side of the proverbial barn, they'll soon get put off – even if it's not their fault.

A decent, entry-level air rifle can be found for around sixty bucks. Between there and two hundred dollars you have a staggering amount of choice. All of our top five fall within that bracket.

You can spend a lot more, of course. More power and larger caliber will add to the bill. The most expensive air rifle we looked at cost just over two thousand dollars. If you're passionate about air rifle shooting, as many people are, there are some fabulous guns available. 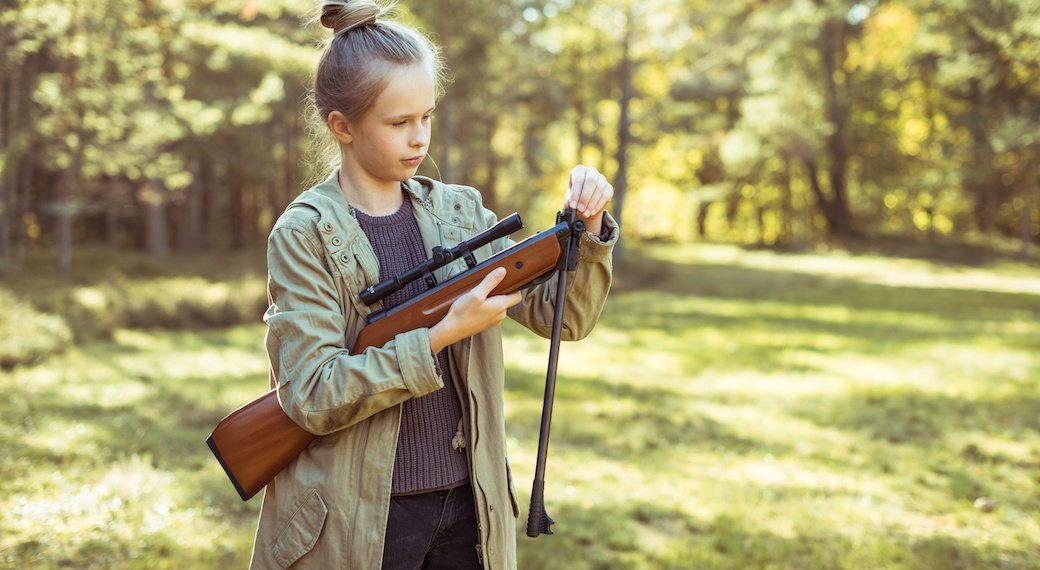 An air rifle takes time to

Q. Do I need a license for an air gun?

A. Under federal law, an air gun is not classed as a firearm, because it does no use an explosive charge to expel a projectile. However, many states do regulate air rifles in some way, depending on factors like the owner's age and the rifle’s power. Individual county laws or ordinances may also apply.

The only way to be sure is to check with your local administration. Different rules apply to hunting with air guns (rather than target shooting), so you need to check that with your state's game and fish authority.

A. This is one of the most common questions when choosing an air rifle. We surveyed a number of experts, and the answer is invariably, "It depends..."

.177 pellets are smaller. Velocity is higher, so trajectory is flatter. If everything else is the same, a .177 is more accurate over distance. Ammo is usually cheaper. If you like shooting tin cans in the yard, or paper targets at the range, we recommend a .177. They are also popular for vermin control, making them an excellent all-rounder.

A .22 rifle is more powerful. If you're hunting, the larger pellet has considerably more stopping power. With small game, you're not likely to be shooting at much distance, so projectile trajectory is less important. If hunting is your thing, with occasional target shooting thrown in for practice, a .22 air rifle will suit you better.

Those are our opinions, but we guarantee you'll find just as many experts disagree as those that agree!

Q. Should I use a particular type of air rifle pellet?

A. There could actually be two questions here: which brand of pellet, or which physical type.

The answer to the first is that you can't really expect accuracy if you use cheap air gun pellets. Budget pellets often have inconsistent shape and weight, so no two shots are the same. Quality pellets deliver the consistency you need. We can't recommend a particular brand because every rifle and pellet combination delivers different performance. It pays to try different ones until you develop a preference. Small sample packs are available from some suppliers.

As for type, there are three different shapes generally available: