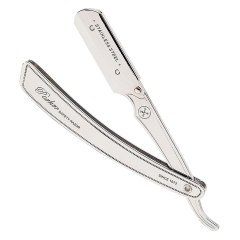 This well-balanced choice handles heavier beard growth exceptionally well; ideal for those who need something strong.

Blades lock easily into place. Owners praise the pinpoint control and balance in the hand. Simple yet attractive design. Good for those who need something for proper maintenance of a long beard.

Heavier than expected; not ideal for first-time users. Handle and blade can be difficult to open. 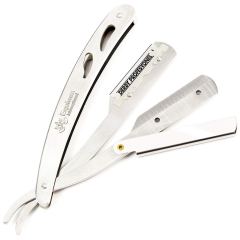 For those who want an experience with the convenience of disposable blades, this affordable model is an excellent choice.

Blades are extremely sharp, so it only requires a light shaving touch. Affordable alternative to more high-end models. Disposable blades do not require honing.

Removing and changing blades can be challenging. Handle is flimsy; not easy to control shave. Rusting and pitting have been reported. 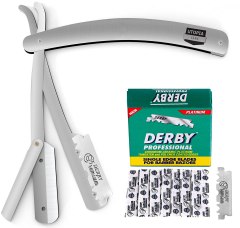 Great introductory model for those who want closer shave, rather than those from standard cartridge options.

Blades are easy to change out, making this ideal for first-time users. More affordable than standard cartridge units. Performance without the need for honing.

Tang (grip handle) is very thin and hard to hold. Included blades are on the dull side. Blades do not fit evenly in holder. 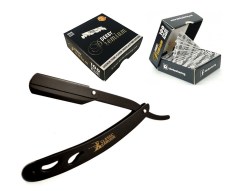 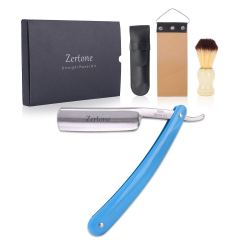 Classic design that features a single carbon-steel blade attached to a mahogany handle.

Vintage barbershop design with an ergonomic, bow-shaped handle for comfortable handling at all angles. The hollow handle allows the wet blade to dry quickly.

Blade isn’t disposable, so proper maintenance of blade oiling and stropping is essential to the longevity of the unit.

If you’ve been wondering about whether to buy a straight razor, or what all the fuss is about, we recommend you first go to a barber and get shaved the old-fashioned way. It’s a sensory experience well worth the cost, and you’ll likely come away understanding just why straight razors have never gone out of style.

If you already know you want a straight razor, then you’re still going to have questions because while it may look like a simple instrument there’s a whole world of choice. Most people will picture a finely sharpened blade – and that’s the traditional style – but did you know there are different blade shapes, thicknesses, and materials? Or perhaps you’d prefer a shavette? 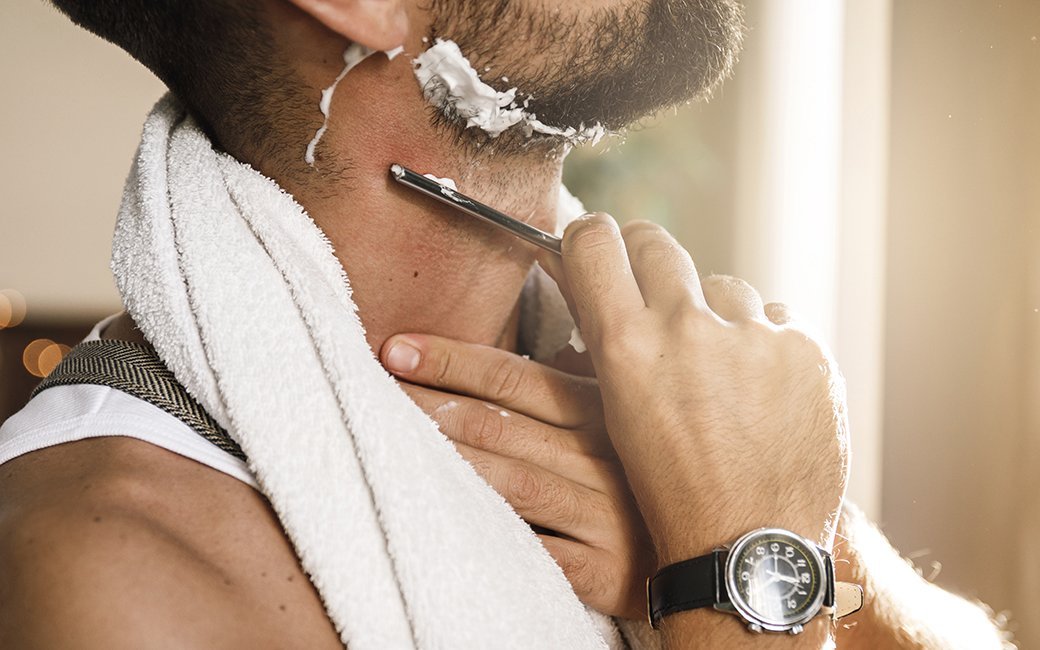 You don’t convert to a straight razor for a fast shave. It’s about taking something many find a chore and turning it into a pleasure. So, take your time.

Traditional straight razors are usually the best for home use. The blade on a traditional straight razor will last years, perhaps a lifetime. A full-blade straight razor also has a longer cutting edge than a shavette, which makes it easier to control, particularly for those new to this kind of shaving. Many professionals recommend starting with a full-blade straight razor. Full-blade razors are a little heavier than shavettes as well. It’s not a huge difference, but the extra weight means less physical force is needed, so again there’s improved control and less chance of cutting yourself. For some, the additional heft of a full blade just feels better in the hand.

Shavettes are more convenient if you don’t want to get involved with sharpening. With a shavette, you simply replace the blade as soon as it starts to go blunt. There are actually six different blade clamping methods, though the only thing that’s truly important is that the blade is clamped firmly. If the blade moves, you’re not in full control, which can feel uncomfortable and might lead to you cutting yourself. This is frequently a problem with cheap shavettes, and mechanisms can wear over time, though that’s not common on good-quality models. In commercial establishments, shavettes are almost universal to ensure good hygiene. The barber will change the blade for each customer.

With straight razors, the blade is always steel, but the description can be confusing. Much is made of carbon steel, but as all steel contains at least some carbon the phrase is something of a marketing gimmick. High-carbon steel is different and may be identified by a number (440 HC, for example). This steel is much harder, so it stays sharp longer, which is ideal in a straight razor blade. However, when a high-carbon steel blade needs sharpening, more work is involved. You may also come across German or Japanese steel blades, which can also be misleading. You need to be careful because anyone can use these terms. For example, real samurai steel is created by folding and can be incredibly sharp, but it’s rare that straight razors made from “Japanese steel” are samurai-grade.

The blade point on a straight razor can vary in shape. There are six shapes in all: barber’s notch, Dutch point, French point, Spanish point, spike point, and square point. It’s recommended that beginners start with a Dutch point, which isn’t actually a point at all. A Dutch point is also called a round point, and it’s very forgiving. However, it does lack a clearly defined edge, so it can’t be used for precision shaving. French and Spanish points offer something of a compromise, and the others are generally used for those who are getting artistic with beard or hair designs.

Straight razors also have different blade grinds. Hollow grinds are most often used because they have a small amount of flex. These razors give good feedback, which reduces the chances of cutting yourself. Singing grinds are an extreme form and can be very sharp if honed properly. Unfortunately, these straight razors are also fragile, so it’s quite possible to break the blade if dropped. Wedge shapes are an older style but harder to maintain and not very forgiving. Generally, they are found on antique straight razors, not modern ones.

Blade widths are given in 1/8-inch steps, with the majority of straight razors varying from 3/8 to 7/8 inches. Wide blades last longer but aren’t as maneuverable. Narrow blades lack feel, making it more likely you’ll cut yourself if you’re inexperienced. Straight razors with widths of 5/8 inches or 6/8 inches are common compromises.

Because shavettes have lightweight blades, the handle also has to be light to maintain proper balance. If you’re selecting a shavette, the main consideration is the style of the handle – or rather the decorative scales attached to the sides of the underlying frame. Plastic resin is a common material and comes in an enormous variety of colors and patterns. These handles can be made to look like metal, so it’s worth double-checking if it’s a metal handle you’re after. Stainless steel and aluminum are also used and so is wood. Horn is occasionally found. Ivory was used in the past but is now illegal. The area between the blade and handle is called the shank and may have jimps, which are small indentations intended to improve grip. Some people like jimps, and some don’t.

"Straight razors were the primary means of shaving for more than 200 years until Gillette introduced the safety razor in 1903."
STAFF
BestReviews

You will occasionally find disposable-blade straight razors for under $10. They’re usually lightweight, with plastic scales. The main complaint with these shavettes is that the blades aren’t as sharp as they should be. If you want to enjoy your shave, they are best avoided.

Quality versions of both types of straight razors start at around $20. There are hundreds to choose from, in just about every weight and style you can think of, without spending more than $40.

Straight razors with high-carbon steel blades, often handmade, can be $100 or more and occasionally as much as $300.

Caution
Be careful when choosing shavette blades. Many are sold as full blades like those used in safety razors, but these need to be broken in half. You can give yourself a nasty cut if you aren’t careful. Instead, look for shavette blades sold as half-blades.
STAFF
BestReviews 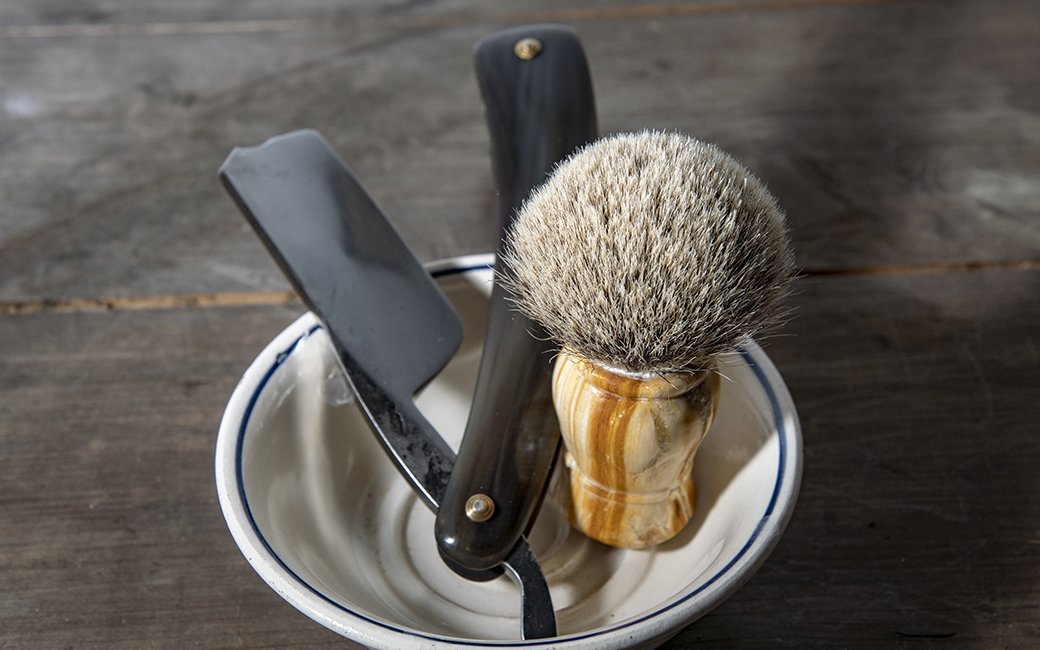 It’s nice to have the proper gear when using a straight razor. While you could use any old cup to lather up your soap, why not treat yourself to the real thing? It’s called a scuttle.

Q. Am I more likely to cut myself with a straight razor?

A. It’s understandable that you might be nervous about using a straight razor! However, the shape of the straight razor’s blade is designed to protect the skin while shaving the hair. When you first use one, you’re more likely to give yourself a poor or uneven shave than you are to cut yourself. Of course, nicks are always possible, especially if you have the occasional blemish, but you can nick yourself with electric or safety razors, too.

Q. Do I need to strop my straight razor?

A. If you’re using a straight razor with a full blade, yes. It’s the only way to get a really fine edge. While it looks like something that takes a great deal of expertise, a rapid action is really just for the movies. Relatively slow, smooth strokes are better. You’ll find numerous how-to videos online.

Q. Are shaving brushes made with badger hair?

A. Some shaving brushes are badger hair brushes. There are also boar’s hair and horse hair shaving brushes. However, many shaving brushes now use synthetic nylon bristles. Lots of expert barbers prefer synthetic shaving brushes. While not quite as stiff, they produce lather just as quickly and use less soap because they don’t soak up water like natural hair. They also dry faster and are considerably cheaper. In many areas, badger populations are in decline, so synthetic brushes are eco-friendly, too. 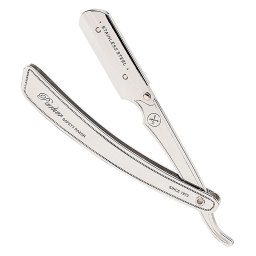 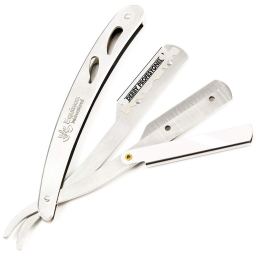 Best Bang for the Buck
Equinox International
100 Single Edge Derby Blades - Close Shaving
Bottom Line
For those who want an experience with the convenience of disposable blades, this affordable model is an excellent choice.
Shop Now 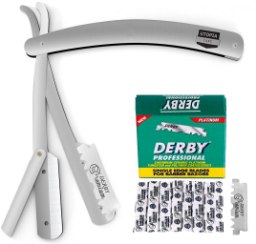 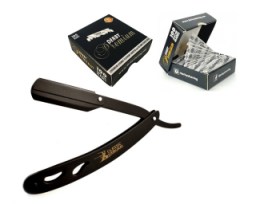 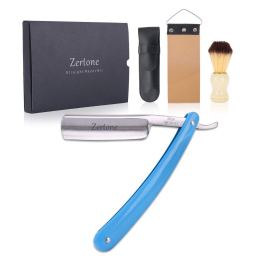 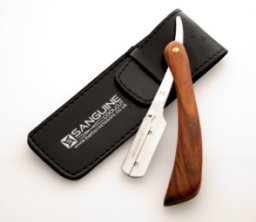