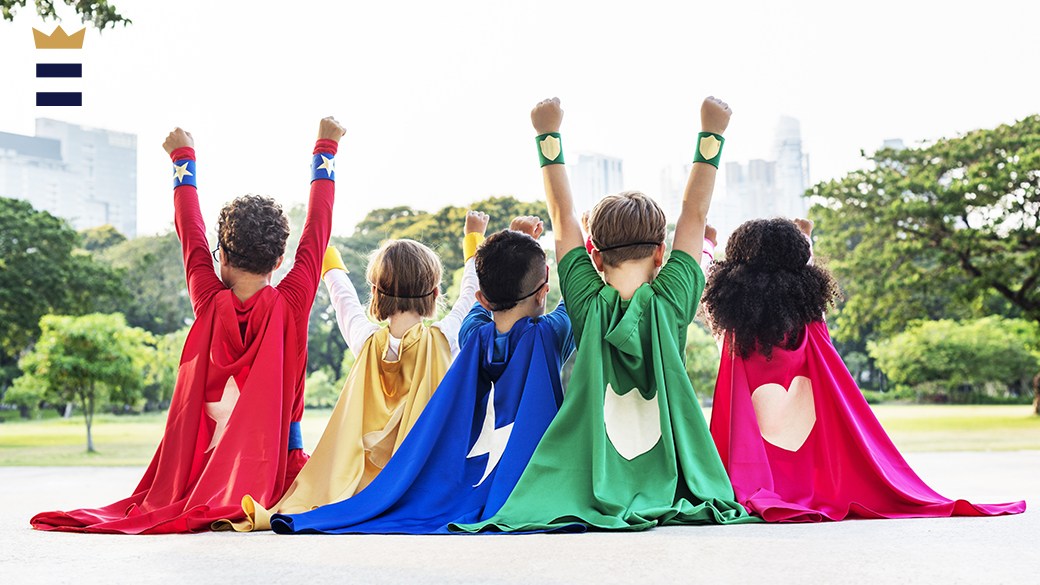 Add accessories like huge, soft and plush fabric superhero fists to your little superhero’s costume and make it really stand out from the crowd.

Which superhero costumes for kids are best?

Superheroes possess powers that ordinary people don’t have. They are on television, in movies and video games and in comic books. Superheroes use their superpowers to protect the public, fight crime and help the world be a better place.

Encourage kids’ imaginations by getting them a superhero costume for Halloween parties. If you are looking for an officially licensed Batman costume, take a look at the Batman the Brave and the Bold Costume. It comes with a jumpsuit, mask, cape, wrist gauntlets and boot tops.

What to know before you buy a superhero costume for kids

If you are buying a superhero costume for a child, make sure you buy one whose superpowers and costume appeal to the child. Here is a quick look at the six most popular superheroes:

What to look for in a quality superhero costume for kids

The most well-made superhero costumes are the ones that are manufactured under licensing agreements with Marvel and DC. These agreements require the manufacturer to meet standards for quality, safety and accurate representation. Knockoffs generally are made with cheaper materials and lower standards.

When you look at photos online, the child model is wearing a complete outfit and you need to read the fine print to see how much of it you get. A less expensive superhero costume for kids won’t have all the details that make the costume complete.

Read the packaging carefully because Halloween costumes for kids are sized differently than regular apparel. Do not choose a size based on the child’s age or clothing size.

Read the online customer reviews and learn from the experiences of shoppers like you. Pass along the favor by leaving your own review.

How safe are kids’ superhero costumes?

A. Most costumes say they are made of fire-retardant materials. Go a step further and make sure things like wigs, hats and superhero accessories are fire-retardant, too.

Why are the sizes of superhero costumes for kids so different from one manufacturer to the next?

A. Sizes always vary slightly from one manufacturer to another, but it seems to be even worse among costumes for kids. It is always a good idea to check online reviews and see what customers have to say about fit.

What’s the best superhero costume for kids to buy?

Batman the Brave and the Bold Costume

What you need to know: This 100% polyester Batman jumpsuit with mask, cape, wrist gauntlets and boot tops says superhero wherever you go.

What you’ll love: This officially licensed DC character superhero costume for kids is tested to meet industry safety standards, unlike counterfeits and knockoffs.

What you should consider: The PVC mask has large eye holes that allow the child to see easily without obstruction.

Top superhero costume for kids for the money

What you need to know: This officially licensed Wonder Woman costume is accurate down to the last detail.

What you’ll love: This costume includes a sleeveless tank-style dress, cape, wrist gauntlets, tiara and pull-on boot covers kids wear over their own shoes. This superhero costume is easily coordinated with other superhero costumes for family or friends who want to go costumed as a group.

What you should consider: This manufacturer warns that form-fitting costumes like this one tend to run small, but they don’t say by how much.

What you need to know: This set is ideal if you are supplying everything at your surprise costume party.

What you’ll love: When your guests arrive, each gets a satin cape, felt mask and slap bracelet. The cape is attached with velcro and has a different superhero design on each side. The fabric is smooth and breathable satin that is colored with environmentally friendly dyes and is machine washable. Choose from such giants of the superhero world like Superman, Spiderman, Batman and the Incredible Hulk.

What you should consider: This party set is meant for kids from 4 to 10 years old.