Best Elf on the Shelf Sets 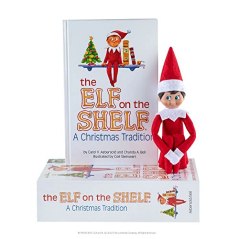 The original Elf on the Shelf kit, which is considered the ideal starter set, comes with a durable box for easy storage.

A must-read for families during the holiday season – the classic tale by Aebersold and Bell that keeps kids in anticipation of Santa's arrival. Comes with an Elf on the Shelf figure with choice of colors.

The elf is a bit flimsy. A few complaints from consumers who received the wrong elf or none at all. 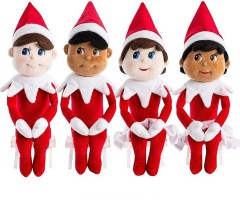 This adorable, affordably-priced elf is a great way to share the tradition of the scout elf with the whole household.

A soft, huggable elf with a sweet facial expression. It's 19 inches long, which is considered the ideal length for kids to play or cuddle with it. Big eyes and friendly face. Easy to customize with accessory sets.

Not posable, so you can't sit it on a hard surface like the classic elf. Some consumers received the wrong elf. 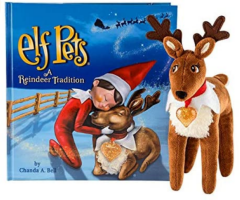 Don't miss out on this adorable reindeer and cute story book if your child already loves the classic tale of the scout elf.

A memorable story of how Santa relies on reindeer and the spirit of Christmas to power his sleigh. Comes with a soft, 8.25-inch plush reindeer, which stands on its own. Antlers stand up and won't droop.

The reindeer isn't very stable when standing. Rare reports of the book arriving without the reindeer. 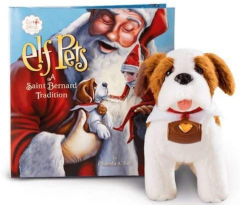 Consumers are big fans of this St. Bernard's quality construction, as well as the well-written tale that comes with it.

St. Bernard plush sits up on its own and won't tip over. Tale promotes positive relationships with animals. Collar with barrel is a favorite, unique detail. Consumers say the artwork is impressive.

Some consumers felt the plush was a bit too small considering the price of the set. 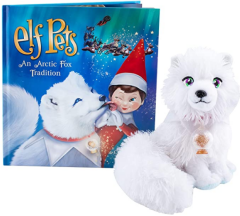 Many consumers appreciate this Elf Pets set, which introduces kids to arctic foxes through a fun, approachable story.

Plush has a high-quality texture, which is evident with the arctic fox's bushy tail. Has friendly, bright blue eyes. Storybook has vibrant, engaging pictures and easy-to-read text for beginner readers.

White fur gets stained or discolored easily. Some reports that the charm necklace breaks rather easily.

Buying guide for Best Elf on the Shelf sets

As much as kids wish that it were Christmas every day, it only comes around once a year. During that special time, Santa has a lot to do. So much, in fact, that he needs a little help. An Elf on the Shelf can assist Santa by watching over your family during the day and reporting back to the jolly fellow at night. 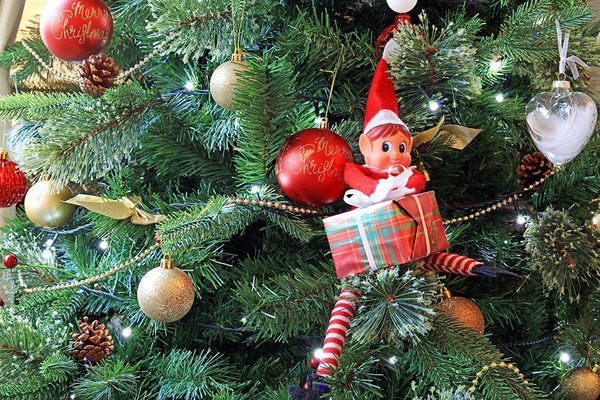 The “official” week that elves arrive home is Scout Elf Return Week, which is usually the week after Thanksgiving. However, an Elf on the Shelf can be adopted at any time over the holiday season.

The most important decision to make when purchasing an Elf on the Shelf set is what you need. To keep things simple, we divided all the sets into just two categories: starter sets and accessories.

If you've never adopted an Elf on the Shelf before, you are going to want to know what the elf's powers are, how to name them, and what rules you need to follow so the elf can do their job for Santa. At the very least, an Elf on the Shelf starter set will have an Elf and a story book called The Elf on the Shelf: A Christmas Tradition. The story provides a history of these magical beings and tells you everything you need to know so Santa can keep track of all the good boys and girls.

Accessory sets do not have the elf or the storybook. These sets are for families who have already adopted an elf. 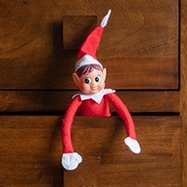 Did You Know?
If you register your Elf on the Shelf, you will receive a special adoption certificate along with a personalized letter from Santa.
Staff
BestReviews

Elf on the Shelf accessory sets may be divided into four categories: clothing, play sets, Elf Pets, and others.

It is great fun for an Elf on the Shelf to get dressed up. For this reason, a variety of sets feature special clothing. If your elf is into sports, likes to dance, wants to be a pirate, or just wants a scarf and coat to keep warm, all of these options and more are available.

It can be super exciting when a child comes downstairs and finds their elf engaged in a fun activity. This is the purpose of a playset. For example, if you have a more adventurous elf, he or she might like a ski playset or a set that contains a special elf vehicle. If your elf likes relaxing, a set that enables him or her to read by a fireplace might be more appropriate.

Elf Pets are furry animal companions. You can get a St. Bernard, a reindeer, or an arctic fox. Unlike the elves, these cuddly critters can be hugged and played with all year long.

Every set that doesn't fit comfortably into one of our first three categories can have a home here. These sets range from children's activity book sets and plush toys to party and tree decorations. There's even an Elf on the Shelf set that allows you to write letters to Santa.

Elf on the Shelf set prices

Inexpensive: For $15 to $25, you can get a simple paper product playset or special clothing for your Elf on the Shelf. Dress them in style!

Mid-range: From $25 to $35, you can find the standard Elf on the Shelf set. This set comes with the essentials: an elf and a storybook.

Higher-end: Above $35 is where you'll find bundles that may include an elf, a book, and a playset, clothing, or even a pet. Just about anything goes here. 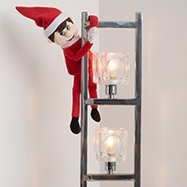 Did You Know?
No one knows for sure exactly how old Scout Elves are, but some tales suggest they are over 1,000 years old.
Staff
BestReviews

When can an adult touch an Elf on the Shelf?

The number-one rule is you can never touch your Elf on the Shelf. This goes for parents as well as children. However, there are certain situations when an adult might need to move an elf. In those instances, a parent can use a potholder, oven mitt, or tongs (gently). Here are a few examples of times when an adult can help out an elf.

What if a child accidentally touches an Elf on the Shelf?

When a child (or a parent) touches an Elf on the Shelf, the elf loses its magic and can no longer fly back to the North Pole to tell Santa all about a child's good behavior. If this happens, it is not a good thing, but you do not have to worry because an elf's magic can be replenished. Here are the top three ways to accomplish that.

1. Not many people know this secret, but cinnamon works like a power-up in a video game. When an elf loses its magic, sprinkling a tiny bit of cinnamon next to the elf can give them just enough magic to get back to the North Pole that night. While there, your elf can see a special elf doctor who can make your tiny friend all better.

2. According to a popular Christmas tale, "The best way to spread Christmas cheer is singing loud for all to hear!" No one loves Christmas cheer more than elves! If an elf loses their magic, a second way to give them enough magic to get to the North Pole that night is by gathering your family so you can all sing a Christmas song together.

3. The best way to get your elf's magic back is by writing a letter to your elf (or even Santa) and apologizing. Being sorry for your mistake means a great deal to your elf (and Santa), and being honest creates very powerful magic that will get your elf back to 100% in no time. 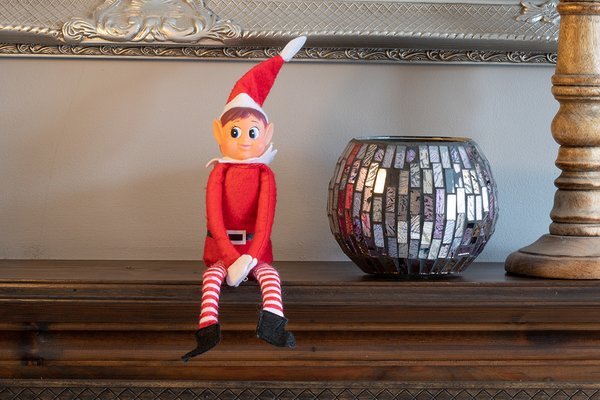 Q. Does Elf on the Shelf have any other names?

A. An Elf on the Shelf is also sometimes called a Scout Elf. The term “scout” in this case refers to the fact that the elf is observing the family in the weeks leading up to Christmas and scouting for good behavior. Each night, the Scout Elf goes to the North Pole to file a report. The following morning, the elf returns to its family and finds a new spot to watch.

Q. How can I tell the difference between a Scout Elf and a regular elf?

A. A Scout Elf wears the official uniform: a solid red jumpsuit.

Q. What are the three most important Elf on the Shelf rules?

Q. Can you touch an Elf on the Shelf Elf Pet?

A. Definitely! The pets are made to be hugged and loved all year long. As a matter of fact, the more love you give your Elf Pet, the more Christmas magic you will create. 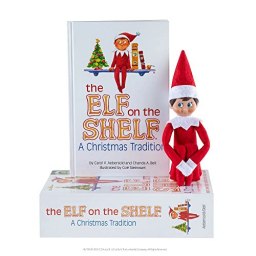 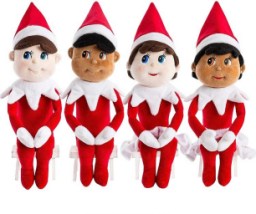 Best Bang for the Buck
Elf on the Shelf
Elf on the Shelf Plushee Pal
Bottom Line
This adorable, affordably-priced elf is a great way to share the tradition of the scout elf with the whole household.
Shop Now 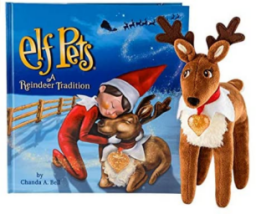 Top Pick
Elf on the Shelf
Elf Pets: A Reindeer Tradition
Bottom Line
Don't miss out on this adorable reindeer and cute story book if your child already loves the classic tale of the scout elf.
Shop Now 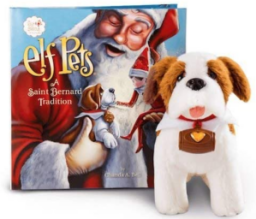 Top Pick
Elf on the Shelf
Elf Pets: A St. Bernard Tradition
Bottom Line
Consumers are big fans of this St. Bernard's quality construction, as well as the well-written tale that comes with it.
Shop Now 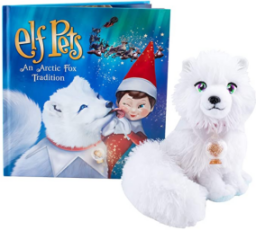 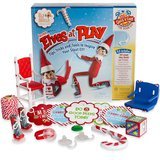 Top Pick
Elf on the Shelf
Elf on the Shelf Scout Elves At Play Kit
Bottom Line
If you are out of ideas to keep your scout elf busy this season, the tools, accessories, and 60-page book of ideas in this kit will add to your family's fun.
Shop Now 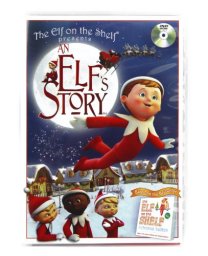 Top Pick
Elf on the Shelf
An Elf's Story DVD
Bottom Line
Add an exciting holiday story to your video collection with this DVD based on the book. Earns thumbs up from young viewers and adults.
Shop Now