All-leather construction ensures this well-priced striking bag will last for you.

Contains 2 bags connected in the middle, so you can work on both upper and lower strike targets. Ships with rubber cables so you can hang it and start working out immediately. Bag is well-balanced to help improve your accuracy.

Cannot adjust the length of the cables to accommodate different ceiling heights. 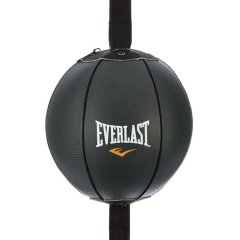 Not the sturdiest striking bag, but it's offered at a very low price for those just starting.

Includes anchors for the floor and ceiling, as well as nylon rope, so you can start using it right away. Uses a synthetic leather construction for a reasonable level of build quality for those who are just learning. Extremely low price versus other options.

Parts are not of the highest quality, so it will not last if subjected to heavy workouts.

Simple design in a round-shaped double-end striking bag that is offered at a low price.

Available in 3 different sizes. Bag has an all-leather construction to give it plenty of longevity. Loops, where the bag connects to the cables, are reinforced to ensure a sturdy setup. Ships with all of the cables and connectors you need to start immediately.

Some sizes ship with S-hooks, which may pop loose during workout sessions.

Shape of this double-end bag allows you to aim your strikes for both upper and lower body.

Uses reinforced straps at the top and bottom to give you a secure connection. Larger and heavier than most double-end striking bags, so you will receive a heavy workout. Smooth surface allows you to use it with bare hands or gloves. Works well for both boxing and MMA.

Doesn't give you the quick responsiveness of smaller double-end striking bags. 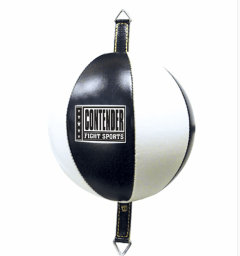 These synthetic striking bags are simple and built to improve your accuracy without needless bells and whistles.

The synthetic leather feels like real leather without the concerns of cracks and constant upkeep. Seams and straps are double-stitched to keep their form for a long time. Rubber cables make it easy to hang and set up. The small, 9-inch diameter helps to build fighters' accuracy.

Great for light practice, but might fall apart after constant hardcore punching.

The double-end striking bag is arguably the most versatile piece of equipment for boxers and mixed martial artists. It's also great for those who simply appreciate the exercise and stress-relieving benefits of hitting something!

However, when you look at the variety available — all the different sizes and mounting options — you'll soon realize that choosing the right double-end striking bag isn't straightforward. For those who need help deciding which to buy, we put together the following comprehensive shopping guide. 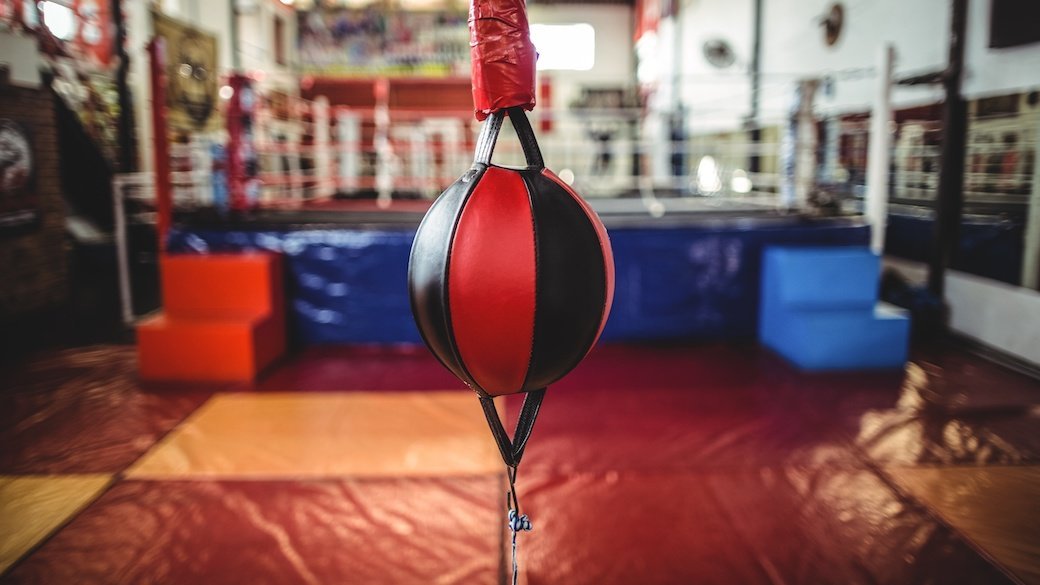 The term “double-end” doesn't signify any particular size or shape. Rather, it pertains to the fact that the punching bag is attached to the ceiling and floor.

The benefits of a double-end striking bag

A speed bag is great for fast handwork. A heavy bag builds power and endurance. The problem is, that both of these are highly specific. The former is mounted up high; you work at or above head height with a speed bag. The latter has a more normal body position, but the weight and density of a heavy bag are a lot like hitting a brick wall; all you can really do is pound at it.

A double-end striking bag is fixed at shoulder height and held in place at the top and bottom. You can use it to practice combinations, counter-punching, kick speed, and so on. It offers a much more comprehensive training experience to serious boxers and martial artists, as well as to those who simply enjoy this form of exercise.

A single double-end striking bag is often a simple ball; sometimes the shape is elongated. This is the option to choose if you're developing speed and accuracy. If you don't hit it square, its movement can be erratic, much like an opponent. You can get in close and add dodging and weaving to your workout.

A two-in-one striking bag is usually two balls stacked on top of each other, so you have a head and body to aim at. You can take a boxing approach or combine handwork and footwork. While it doesn't move as quickly, most two-in-ones are still faster than a heavy punching bag. (The exception to this rule is a “heavy” punching bag designed specifically for increasing power.)

There are two mounting options. For want of better expressions, we'll call them portable and fixed.

Inexpensive double-end striking bags tend to be made of synthetic leather, also known as PU leather. When making real leather, part of the hide is normally discarded. Synthetic leather is made by taking this waste product and coating it in polyurethane. It's much less expensive to produce, but its wear characteristics are inferior. A synthetic leather bag is fine for occasional use, but it won't last long under constant punishment. If you're going to use your double-end striking bag on a daily basis, it's worth paying a little extra for real leather.

The stitching of your striking bag needs to be as secure as possible. Double or triple rows of nylon provide plenty of strength. Before you buy, check that the seams aren't raised. Raised seams could prove uncomfortable with regular hitting.

A double-end striking bag is held in place by a combination of ropes (usually nylon), bungee or elastic cords, and S-hooks. Adjustability is useful to compensate for differences in ceiling heights. It's important to note what is included with the product when ordering, since even the pricier models may not include all necessary components.

Quality of elastic is paramount. If it's weak, it will give a poor reaction to striking and will soon need to be replaced. It's not expensive to upgrade if you find that's the case, but it is frustrating. Conversely, if it's too strong — in other words, if you’ve got heavy bag elastic paired with a light bag — you won't get much feedback.

Size is not usually an issue with two-in-one bags because they're all fairly similar, but single bags can vary from four to nine inches in diameter. Small bags are great for precision and fasthand work, but if you're looking for all-round exercise, you'll want a larger model. A bigger bag is easier to hit and also marginally slower, so it's recommended for beginners.

Almost all single bags and most two-in-ones have one or two latex bladders inside which are inflated for use. These inflation points are usually, but not always, near the top. Avoid purchasing a double-end striking bag in which the inflation point is within the hitting area. Some cheaper bags have this configuration.

There's little point in buying a cheap double-end striking bag. Poor materials and stitching mean it's just not going to stand up to the beating it's supposed to take.

That doesn't mean you have to spend a vast amount of money, however. If you want a double-end striking bag for general exercise (and stress relief), prices start around $25. High-quality models seldom exceed $60. Many people spend more than that on gym footwear.

Two-in-one double-end striking bags tend to cost a little more, but not much. Expect to spend between $60 and $100 for a good one.

Those from top brands can exceed $150, but unless you're a professional, you probably won’t see a need to spend that much. 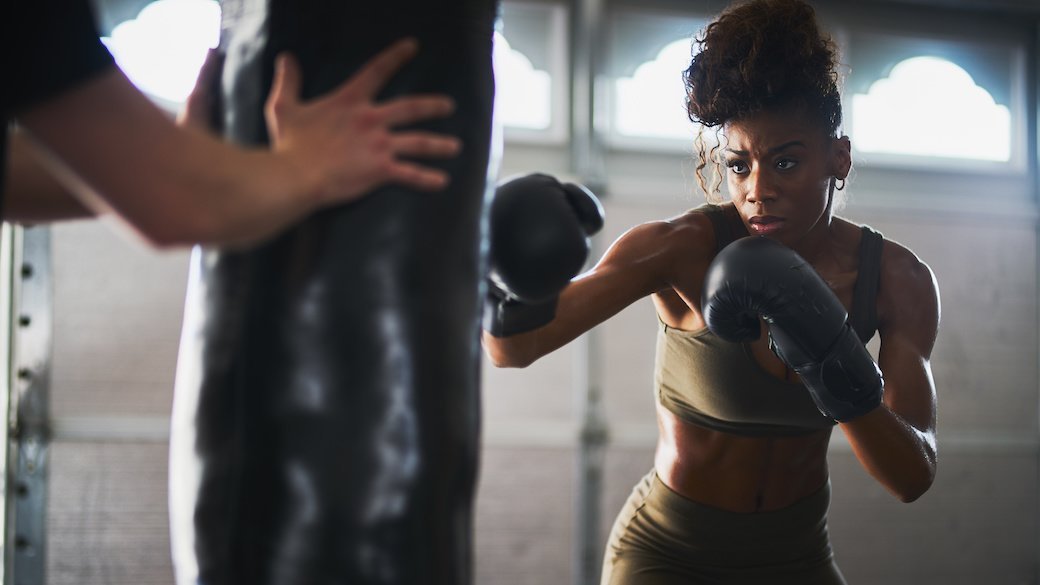 You don't need any experience to start using a double-end striking bag, but a little training at a local gym can help you learn the proper techniques that help you avoid common injuries.

Q. What's the difference between a double-end striking bag and a speed bag?

Somewhat confusingly, you can get double-end speed bags. These are a hybrid of sorts. Before deciding what you want, think about the type of exercise you're looking for, and choose a shape and weight that suits your goals.

Q. Should I wear gloves when using a double-ended striking bag?

A. This is a personal choice. If you're using the bag for general exercise, hand wraps or light gloves are a good idea. If you're training for actual fights, then not wearing gloves will toughen your skin and build more muscle. That said, using full-weight boxing gloves would also help build arm strength.

The same principles apply to your feet when you're practicing kicks.

Q. What are double-end striking bags filled with?

A. It depends on the type. Smaller models are often inflated with air. Some are filled with water. Heavy bags might come pre-filled with sand, grain, or shredded rags. That can have quite an impact on shipping charges, so it's a good idea to check the cost when ordering. 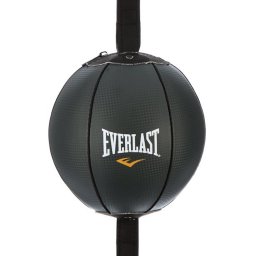 Best Bang for the Buck
Everlast
Double-End Striking Bag
Bottom Line
Not the sturdiest striking bag, but it's offered at a very low price for those just starting.
Shop Now 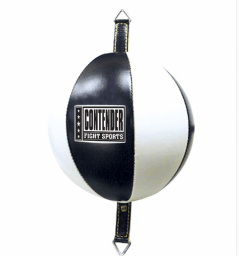