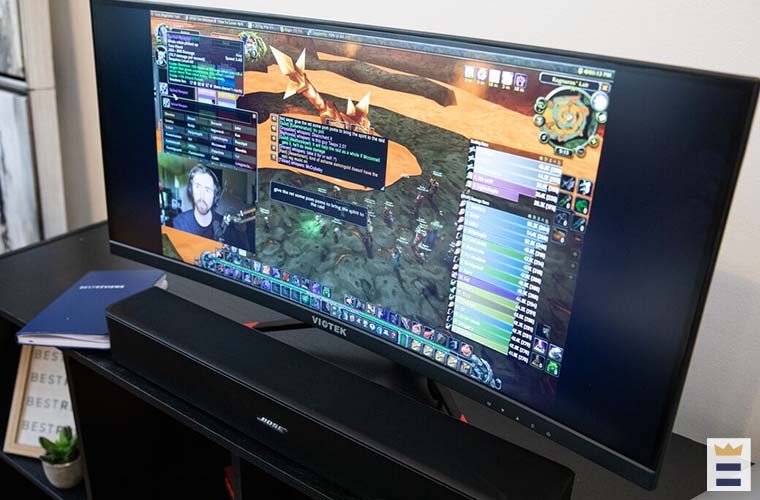 How to choose the best TV for your gaming setup

Ultra HD TVs have been commonplace for years, but 4K gaming only became mainstream somewhat recently. The release of the PlayStation 5 and Xbox Series X, as well as the continued evolution of PC gaming components, mean that more consumers have access to the hardware needed for high-resolution play.

There are plenty of gaming-oriented computer monitors to choose from. However, even dedicated PC gamers increasingly opt to play on TVs because they provide an immersive experience and impressive visual fidelity. Pay attention to a few important features in order to get the perfect TV for your gaming setup.

If you’ve shopped for a new TV recently, you’ve probably run into plenty of fancy terminology and high-tech buzzwords. A decent portion of that is nothing more than marketing techniques. There are some meaningful numbers, though, if you know what to look for.

The Ultra HD resolution isn’t the biggest new development in high-end gaming. The ability to play modern AAA titles at well over 60 frames per second makes considerably more noise than 4K in-game textures do. The top end of the HDMI 2.1 standard accounts for this by delivering enough bandwidth to drive a 4K panel at 120 frames per second with little to no compression. The difference between 60 FPS and 120 FPS gaming is so stark that once you switch, it might be hard to go back.

Some screens can adjust their refresh rates to match the number of frames they receive from a gaming console or PC graphics card. This eliminates the screen tearing and minimizes the stuttering that otherwise occurs when the two figures don’t match.

Unfortunately for consumers, this is yet another aspect of the HDMI 2.1 standard that’s now less than clear. Nvidia and AMD provided VRR technology for years with G-Sync and FreeSync, respectively. Moving forward, expect more TVs to support what’s known as HDMI Forum VRR. It should see increasing adoption since it’s now an industry-wide standard, but it is a different feature than Nvidia and AMD’s implementations.

Input lag is the amount of time it takes a human input (via controller, keyboard, mouse or otherwise) to register on the screen. It plays a big role in choosing a gaming display. By nature, most PC monitors have minimal input lag with many gaming monitors measured in the 10- to 20-millisecond range. It wasn’t always the case, but there are plenty of 4K TVs now available with comparably low levels of input latency.

The difficulty in charting pixel response time comes from the lack of a measurement standard. Manufacturers can essentially offer whatever measurement they want and back it up with their proprietary process. Indeed, most gaming monitors claim a 1-millisecond response time, but few meet those claims when measured objectively.

A. It’s easier than ever to get confused over HDMI standards. As of the end of 2021, HDMI 2.0 no longer even exists. Instead, its features are now considered a subset of the HDMI 2.1 standard. In other words, this renders claims of HDMI 2.1 compatibility meaningless for most consumers.

Upon release, HDMI 2.1 certification implied a certain number of high-end connectivity features. Today, you’ll have to do a little more research to figure out which HDMI features a TV supports, including high refresh rates, variable refresh rates and enhanced audio return channel technology.

Q. Is HDR worth it for gaming?

A. It’s not quite there, but it’s worth paying attention to. High dynamic range technology lets a video source distinguish between bright and dim scenes and adjust the contrast and brightness accordingly. Game developers have to implement the technology in their software for this consideration to even matter. The technology is built into the Xbox Series X and PlayStation 5, and due to the locked-down nature of console hardware and software, you can expect HDR to have a significant positive impact in the coming years.

It’s a slightly different story with PC gaming. The Windows implementation has been notoriously poor for years, although (by most accounts) it’s slowly getting better. Hopefully, HDR PC gaming results in improved image quality soon.

To that end, a great 4K TV delivers substantially better HDR performance than most gaming monitors. For a real HDR experience, local dimming, a wide color gamut and high peak brightness are essential.

Q. Is burn-in a real problem with OLED TVs?

A. It depends on exactly how you use the TV, but most people won’t have any burn-in issues with OLED screens. The biggest issue is with games and shows that have static graphics on the screen for a long time. Sporting events, for example, can cause burn-in in the long term since they place the scoreboard in the same place for most of the broadcast.

The key wording here, though, is “long term.” It takes many hours of static content to induce burn-in. The only gamers who need to worry even a little about it are those who play a single game — a certain popular soccer game, for example — for hours a day without changing titles or genres often.

Similarly, watching a single news channel religiously can imprint scrolling chyrons or sidebars. However, according to real-world testing, most users won’t approach the level of devoted viewing needed to cause burn-in.

Widely regarded as the best TV overall, LG’s midrange OLED lineup never fails to impress. It delivers true HDMI 2.1 connectivity and impressive color depth and accuracy. You get a higher peak brightness with this year’s updated LG C2, but last year’s C1 is a much better deal if it’s available.

This is another previous year’s model of a premium TV, and once again, its significant discount far outweighs any incremental updates to the new version. The QN90A offers just about the widest color depth and best HDR performance of any LCD TV available.

This is the best reasonably priced gaming TV you’ll find. It boasts local dimming, quantum dot filtration and a 120-hertz refresh rate that combine for a pristine gaming experience. You get all this for significantly less than $1,000 at 55 and 65 inches.

Able to display up to 120 frames per second in a wide color gamut with minimal motion blur, this is one of the top all-around TVs. It’s also one of the brightest, so it should work well in even the most well-lit rooms.

If you’re OK with playing at 60 FPS (which many people are), you can save a great deal of money and still get impressive picture quality with this affordable TV. It even sports premium features, such as local dimming and quantum dot filtration for a wide color gamut.

The latest in a line of extremely user-friendly smart TVs, this budget-friendly favorite now sports the Google TV operating system for everyday use. That’s in addition to powerful gaming features that deliver, for example, a good HDR experience for the price.

How to start a bonfire
by Breanna Richey

Earbuds podcast fans will want to find in their Christmas stockings, according to our tech expert
by Cody Stewart