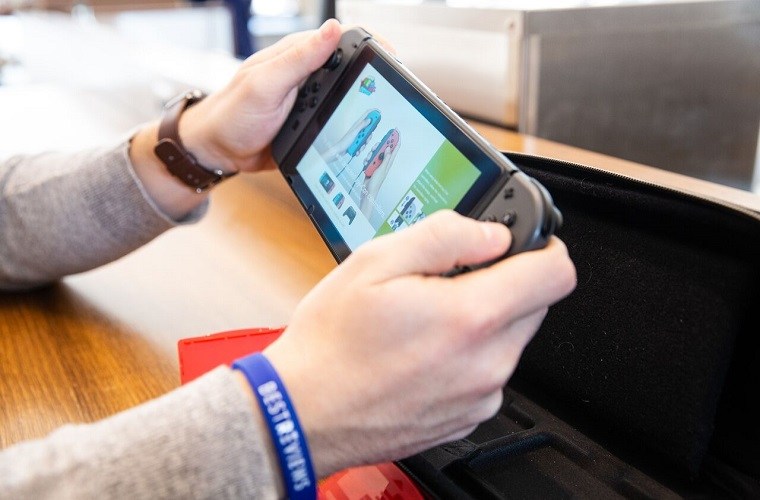 The Nintendo Switch is one of the bestselling video game consoles of all time, and that alone makes it a great gift idea for anybody. However, the original Switch is expensive. If you’re looking for a good back-to-school gift, a Nintendo Switch Lite is a better buy.

The Switch Lite is essentially the same as the original Switch, except that it’s solely a handheld system. It’s excellent for anybody looking for a more affordable console and makes for a great gift for students.

What makes the Switch Lite the perfect back-to-school gift?

Studying should be the top priority for any student, but there can be a lot of waiting between high school and college classes. If there’s no homework to be done, what better way to pass the time than by playing on the Switch Lite?

More affordable than the Switch

The Switch Lite is significantly cheaper than the original Switch, costing just $199 compared to $349. The extra $150 is worth it to those who play on their TV, but many users stick to strictly handheld mode even if they own the original Switch. It’s nice to have the option to play on your TV, but the Switch Lite is an excellent value for anyone who doesn’t mind sacrificing that function.

Play during the commute

Many students have long commutes to college or high school, making the Switch Lite the perfect companion for those trips. It’s fun for students and much better than listening to music, dozing off and potentially missing their bus or train stop.

The Switch Lite offers more than just mind-numbing entertainment as there are many games with a focus on learning that feature puzzle-solving, logic problems and currency systems. Games such as Brain Age help develop and improve cognitive skills for younger students.

Is a Switch Lite a better gift than a different video game console?

The Switch Lite doesn’t pack nearly the processing power as the PS5 or Xbox Series X, but it’s significantly more affordable. The PS5 and Xbox Series X are home consoles, so unless you have a child going away to college and don’t mind breaking the bank for these consoles, they're a fine gift.

However, the Switch Lite’s portability makes it far more appealing for any student. They can take it on the go without worrying about setting it up on a TV or taking up too much space.

What makes Nintendo so appealing to a broad demographic is its first-party games. Iconic video game series such as Mario, Pokemon, The Legend of Zelda, Metroid and Super Smash Bros. are easy to pick up and play and only available on the Nintendo Switch.

So, although you can play a game such as FIFA 23 across multiple consoles, you won’t find any Mario or Pokemon games on a PS5 or Xbox Series X.

Q. Is the Switch Lite as powerful as the base Nintendo Switch?

A. They use the same hardware and are almost identical, but the Switch can render graphics in a 1080p resolution, while the Switch Lite only goes as high as 720p.

Q. How long does the Nintendo Switch Lite battery last?

A. The Nintendo Switch Lite lasts approximately 3-7 hours on a full charge.

This console has a beautiful 5.5-inch touch screen and is optimized for handheld play. It’s lightweight, portable, comes in five stylish colors, and it’s compatible with nearly all Nintendo Switch games.

Plenty of storage space is necessary for anybody who would rather download digital games than buy game cards. This bundle has a charming coral-colored Switch Lite console and a 128GB SD card.

This Nintendo Switch lite has a metallic gray body for a more durable build and a sleeker design. The back has detailed artwork of the legendary Pokemon Dialga and Palkia with a silver or gold finish.

This starter kit has every accessory necessary for anybody with a brand new Switch Lite console. It has comfort grips, a screen protector, a car charger, a folding charging stand and a travel case.

Where to buy: Sold by Macy’s

This is a great value set if you’re looking for an accessories bundle to gift somebody. It comes with a case, tempered glass screen protectors, earphones, a USB charging cable, DuoPen stylus and a game card storage case.

This ultra-clear screen protector helps keep Switch Lite consoles safe from debris. It’s less than half a millimeter thick and reduces scratches by keys and other sharp items.

This bundle comes with two of the top-selling Switch games. New Super Mario Bros U Deluxe is a zany single-player adventure, and Mario Kart is the epitome of a fun multiplayer racing game.

Mario Kart fans will love this remote-control Mario Kart toy car players can control with their Nintendo Switch. Players can turn their home into a course and follow the action on their Switch with three friends.

Where to buy: Sold by Kohl’s

Kevin Luna writes for BestReviews. BestReviews has helped millions of consumers simplify their purchasing decisions, saving them time and money.

What to do if your pipes freeze? BestReviews home improvement expert weighs in
by Allen Foster

When you know cold is coming, BestReviews home improvement expert shares how to prepare
by Allen Foster

Exercises to do at home to skip the January gym rush, according to a fitness expert
by Jennifer Blair