This RC plane’s internal gyroscope makes it fairly easy to keep steady and pull off wild loops, even in windier weather.

Its wheels could be sturdier. 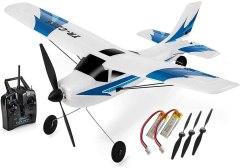 A Trainer RC Plane is a must-have for complete newcomers since they can ease off the gyroscope as they gain experience.

Batteries are not included. 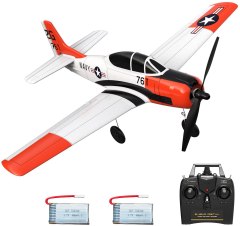 Anyone who needs a tough, yet agile RC plane for especially high flights and impressive aerial ticks should try out the T28 Trojan.

Max flight range of 656 feet. Performs a large loop at the press of a button. Dependably stable flight. Up to 40 minutes of flight time with 2 USB-rechargeable batteries. Rugged material.

Propellers are fairly easy to lose. 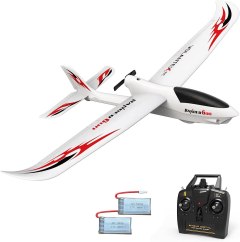 First-time fliers will appreciate the Aircraft Ranger400’s premium durability and how simple it is to keep this gliding RC plane in the air.

Not the best RC plane for performing tricks. 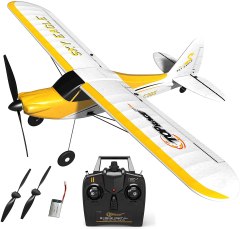 It will take practice to master this RC plane, but if you want to learn how to perform exciting mid-air tricks, this yellow model is a must-have.

People have long been fascinated with flight, and RC planes are an affordable way for people to fulfill the dream of flying their own airplane. It’s also a hobby that appeals to those who have started out with RC cars and boats, allowing them to expand their skills from a single surface to a world of three dimensions. The challenge is finding the best RC plane for the kind of modeler you are and how you want to fly.

There are hundreds of RC planes available, ranging from relatively inexpensive and robust toys for children to highly detailed replica aircraft that involve many hours of construction. This means there’s something for every kind of flyer, but that can make choosing the right RC plane difficult. 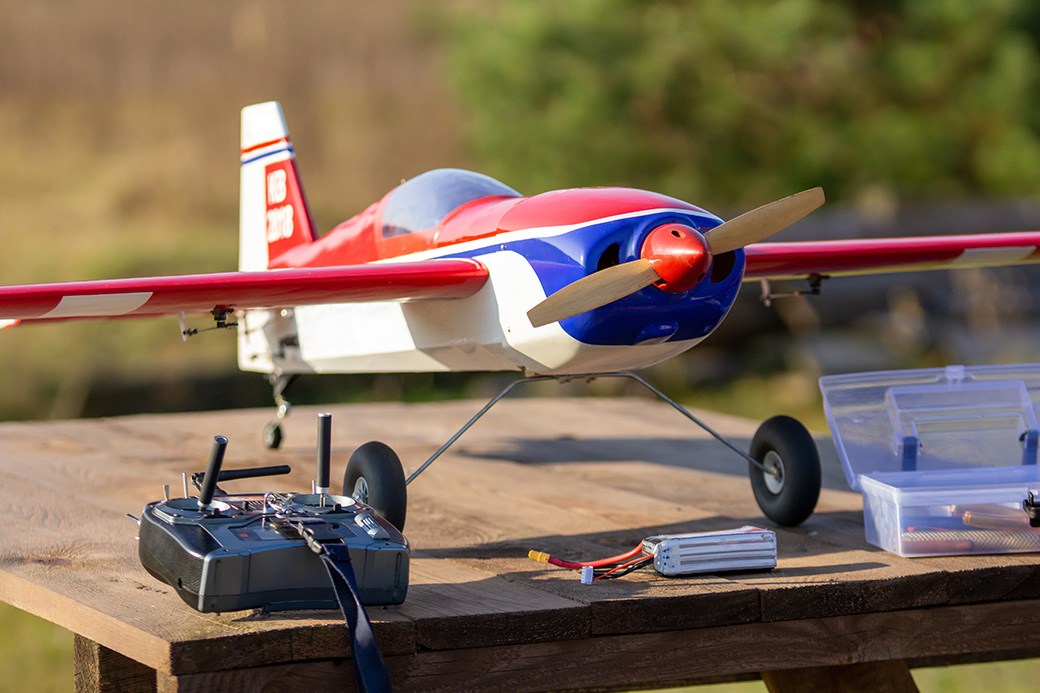 Bear in mind many RC planes need at least minor assembly. Minimize the amount of work you need to do by looking for RTF — Ready To Fly.

How to buy the best RC plane

Materials also vary. EPP (expanded polypropylene) is a lightweight but durable foam that has good impact resistance and is very popular for RC planes. Aluminum is also used, but being heavier, these models are considerably larger.

The easiest planes for beginners to fly are the high-wing models, ones where the wings sit over the top of the fuselage and over the cockpit. Those with wings beneath the fuselage are typically more maneuverable, and RC plane racers have noticeably stubby wings for fast turns. However, this makes them more challenging to control.

Physical size is also a factor. Small planes are not necessarily the best option, and while fighter jet replicas might look attractive, the minimal wing surface makes them harder to control. High-wing models, like their real-world counterparts, are the best trainers.

It’s important to check specifications since two similar-looking models can be very different sizes. Some have wingspans that can easily exceed three feet. The question then becomes how it’s going to be transported from home to wherever it’s flown.

Almost every pilot crashes their RC plane at least once. Most RC planes are pretty tough, but damage is almost inevitable. Whether spares are readily available and how much of the aircraft is replaceable need to be factored into the cost. In the case of cheap RC planes, replacement might be the only option. Investing a little more initially might turn out to offer better utility for the money. 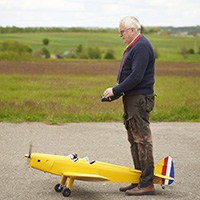 For Your Safety
Flying is an absorbing hobby, and if you’re focused on your aircraft, you may not be aware of people straying into areas where an accident might happen. Whenever possible, have a “spotter” with you — another person who can keep an eye on your surroundings.
Staff
BestReviews

What features do the best RC planes have?

The term channel usually refers to control functions. RC planes have anywhere from two to six channels, which indicates the number of things controlled.

Two-channel RC planes are uncommon, having control over just throttle and rudder. Having three channels adds either elevators or ailerons, and four-channel models generally have the full set of throttle, rudder, elevator, and ailerons. Those looking for the best RC plane in terms of aerobatics will want the latter, though it makes control more complicated. Fifth and sixth channels are available for highly advanced RC planes, often used to raise and lower undercarriage or for lights.

RC plane modes refer to the handheld radio control unit. Mode 1 has the throttle and rudder (yaw) on the right stick, with elevator (pitch) and aileron (roll) on the left. Mode 2, by far the more common, has the controls the other way around.

Confusingly, channel can also refer to the radio frequency the RC plane operates on. Having two RC planes in the same vicinity on the same frequency causes tremendous problems with control. Splitting the frequency into a number of channels avoids this. Newer models may run on “spread spectrum,” which assigns an individual, factory-set ID code to the transmitter. Although the user cannot change this ID, there are 134 million possible combinations, so the chances of a conflict are infinitesimal.

The range of an RC depends on transmitter power and receiver sensitivity. With RTF planes, these are preset. ARF and kit buyers will have the opportunity to choose these items.

It’s common for RTF models for beginners to have a range of around 300 feet, though the best RC planes can exceed 1,000 feet. These figures are for 2.4GHz transmitters, which are common on RC planes for beginners. More powerful transmitters can dramatically extend flight, though, without sophisticated tracking gear, line of sight is a practical limit.

Advanced RC plane enthusiasts can install gasoline or even jet engines, but beginner and intermediate pilots will prefer the simplicity of battery motors. Flight time can be anywhere from 10 to 30 minutes. However, suitable lithium-ion batteries are readily available and usually quite easy to change, so the plane can be landed, and much like refueling is soon ready for takeoff again.

Gyroscopes are a common inclusion with RC planes, helping provide airborne stability. That said, they prevent the pilot from doing aerobatics. Some RC planes offer presets for beginner, intermediate, and advanced pilots, minimizing gyro interference. Some also have “panic recovery” that will quickly return the airplane to level flight.

GPS and geofencing offer some very advanced options, including the ability to preset the flight path via smartphone or set flight boundaries so the RC plane can’t fly beyond its range. Not surprisingly, this functionality has a considerable impact on price.

For experienced RC plane builders, there are few boundaries. Some have built RC jet aircraft capable of 150 mph.

Are there any useful accessories for RC planes?

General maintenance and repair are an integral part of RC plane ownership. While many hobbyists will have appropriate tools, those new to flying will find standard DIY pliers, wrenches, and screwdrivers are often too large. The Hobbypark 11-in-1 Multi RC Toolkit is specifically designed for RC models and comes in a handy organizer case.

The Ernst Manufacturing Ultra Stand is something of a luxury, but keen RC plane enthusiasts and aero modelers will appreciate the way it allows quick and easy access to all parts of the airplane while keeping it off the work surface.

How much do RC planes cost?

Entry-level RC planes for kids and absolute beginners cost from $35 to $50. These are often made of EPP foam for durability. Range and aerobatic ability have limits. They can be a fun way to start, but many pilots soon want to move on to something more responsive.

The widest choice of RC planes is found between $50 and $150. Within this bracket, you’ll find everything from high-wing trainers to USAF replicas. Several have switchable modes for beginner or intermediate flyers. The majority of new pilots can find an exciting plane to fly in this bracket.

More advanced and maneuverable RC planes cost between $200 and $350. However, it’s important to check details, because the transmitter, battery, and charger may be extra. This could add another $200 or more. Beyond that, the sky really is the limit. RC plane enthusiasts can spend thousands of dollars on their aircraft, though this approach isn’t recommended until considerable experience has been gained.

Did You Know?
According to the Academy of Model Aeronautics, the first RC plane was built as far back as 1938 by brothers Bill and Walt Good. It was called the Big Guff.
Staff
BestReviews

Even the best RC plane has a learning curve, so new pilots need to be prepared to spend a few hours on practice. These RC plane tips improve the chances of success and help you fly safely. 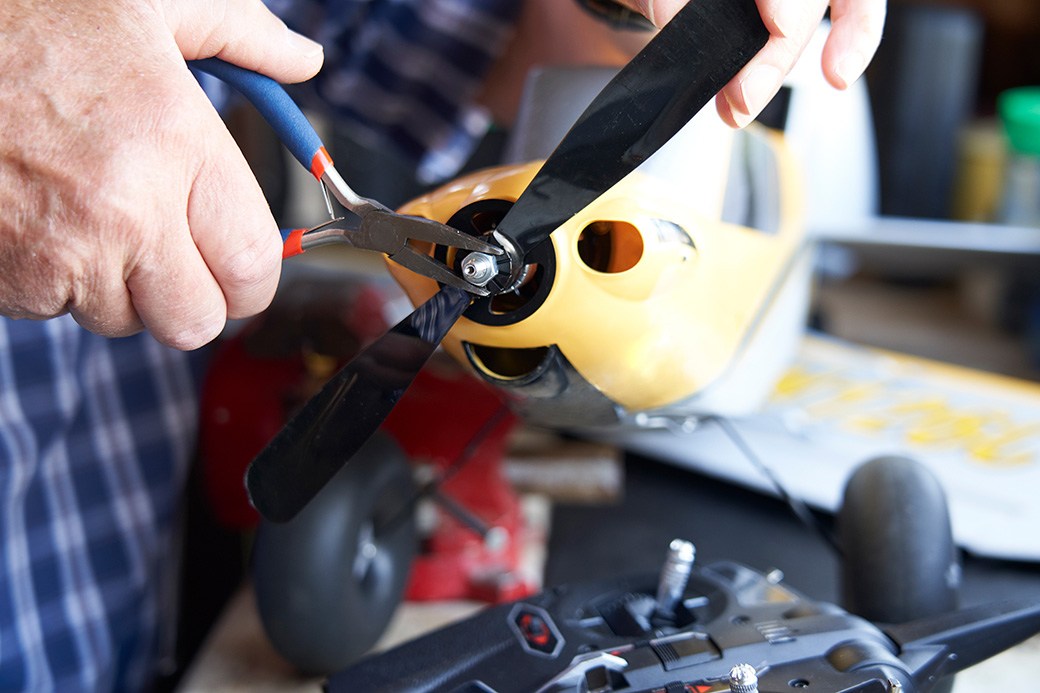 Most RC planes can survive a modest crash, and it’s almost bound to happen. The propeller is a likely casualty, so it’s a good idea to carry a spare if field replacement is practical.

Q. How difficult is it to fly an RC plane?

A. The best RC planes often have systems to help learners, but it requires practice. At first, coordinating the controls can be challenging. Most experts suggest they’re easier than RC helicopters. Gyroscopes help balance the plane in flight, so it’s a feature well worth considering. Some people can manage basic takeoff and landing after a few attempts, but others take longer. Everyone learns at different speeds. Focus on the basics first, and it soon becomes second nature.

A. There’s a common misunderstanding that small planes are good for beginners. In fact, larger models are less affected by wind variations, so they’re easier to control. It’s a good idea to look for something tough, as crashes are bound to happen. Models described as a “trainer” are often appropriate. Some RC planes have systems that compensate for a new pilot’s tendency to over-control the plane, although these may add to the cost.

Q. Is it legal to fly RC planes?

A. It is, but some areas have restrictions. It’s worth checking local statutes where you intend to fly. Generally speaking, you aren’t permitted to fly over 400 feet, near airports or military zones, near crowds (sports stadiums, for example), or in National Parks. 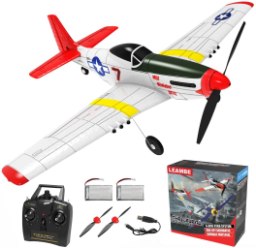 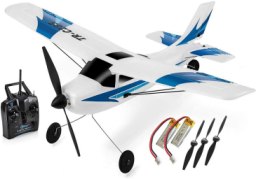 Best Bang for the Buck
Top Race
Trainer 3 Channel Remote Control Airplane
Bottom Line
A Trainer RC Plane is a must-have for complete newcomers since they can ease off the gyroscope as they gain experience.
Shop Now 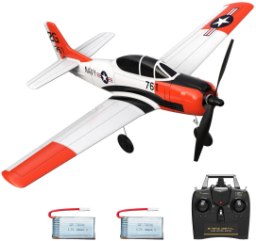 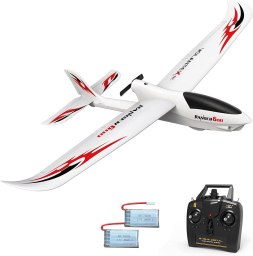 Top Pick
VOLANTEXRC
Ranger600
Bottom Line
First-time fliers will appreciate the Aircraft Ranger400’s premium durability and how simple it is to keep this gliding RC plane in the air.
Shop Now 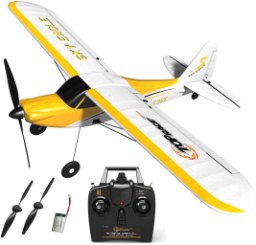 Top Pick
Top Race
TR-C385 RC Plane
Bottom Line
It will take practice to master this RC plane, but if you want to learn how to perform exciting mid-air tricks, this yellow model is a must-have.
Shop Now 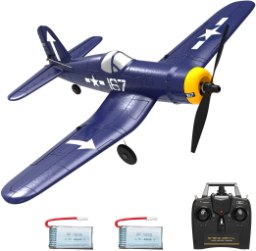 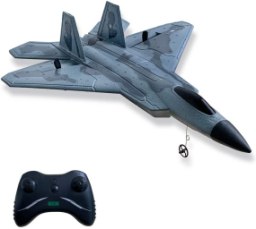 Top Pick
Hawk's World
F-22 Raptor
Bottom Line
A F-22 is as easy to fly as it is cool-looking, and beginners will have a blast flying this RC plane backwards, straight up, or zooming around the park.
Shop Now 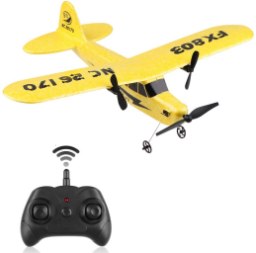 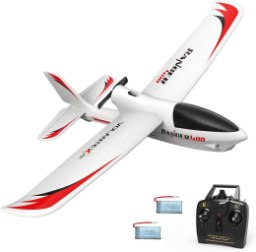 Top Pick
Volantexrc
Ranger400
Bottom Line
The Aircraft Ranger400 is a sturdy and easy to pilot RC plane for beginners who prefer to peacefully soar around.
Shop Now