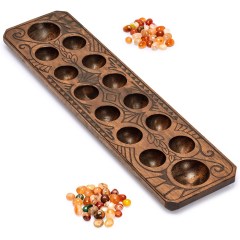 A full-sized, beautifully decorated mancala set with a real wood board and polished quartz pebbles.

Made of solid rubberwood with evocative decorative carvings inspired by mancala origibns. Comes with 48 pebbles made of polished quartz in variety of colors, plus spares. Includes instruction booklet.

A bit pricey. Bowls can be narrow for larger hands. 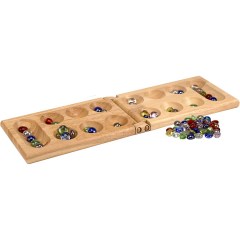 A great way to play mancala portably without spending a lot of money.

Some say the cups are too shallow to hold large numbers of pebbles. 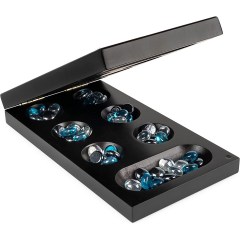 This elegant, modern mancala set looks as good on display as it does in use.

Some complain the cups are too shallow. 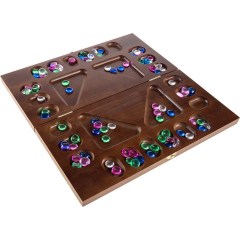 Double the gameplay with this folding mancala set for four players.

Square board allows for 4 players compared to the traditional 2. Made of rubberwood for softer touch during gameplay. Folds for storage and holds pebbles inside with a lock.

Pebbles are made of plastic. A bit pricey. 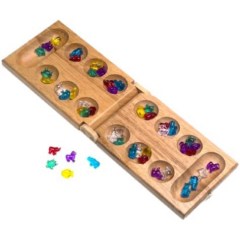 Animal pieces are plastic and quite small.

One of the oldest families of board games in the world, mancala games are beloved for their simplicity and depth of strategy. Combined with the pleasant feeling of scooping stones out of the pits in the board, it can be meditative in its elegant gameplay.

Many mancala boards are designed to be portable, while others are intricately designed and have a large, eye-catching presence on the table. The materials of the boards and stones vary and have the biggest impact on price and quality. While Kalah is the most common variant in Western countries, many games exist in the mancala family.

The great number of variations and board styles offer plenty of options for this game, which is enjoyed by people of all ages around the world. 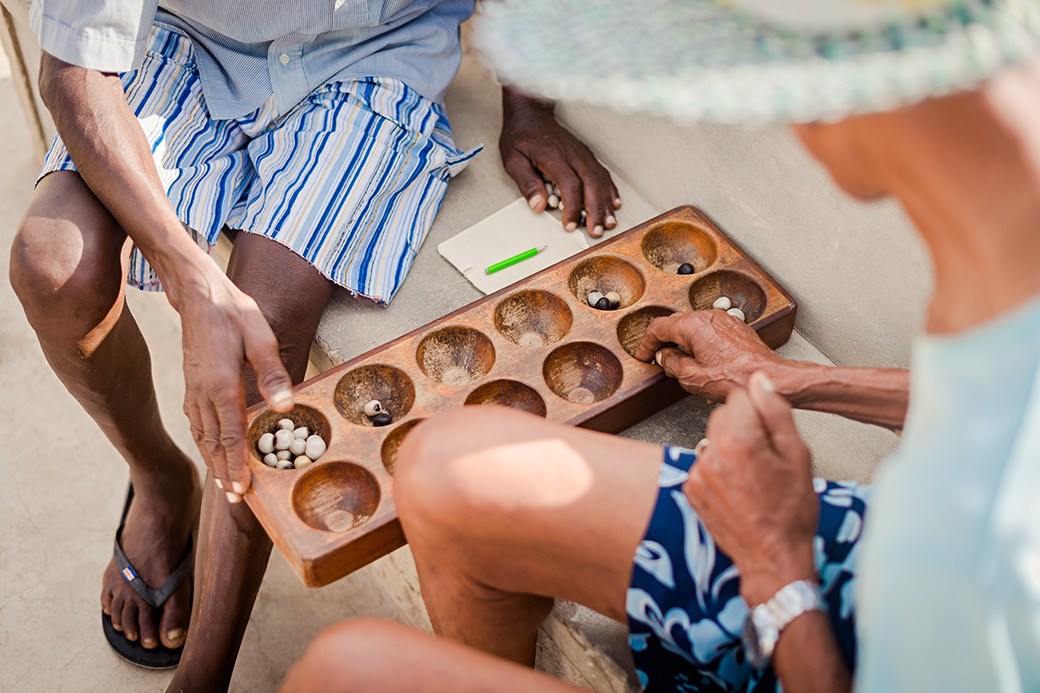 Mancala is one of the oldest board games in the world. Archaeologists have discovered what are believed to be mancala pits carved into stone in Egypt dating back thousands of years.

How to buy the best mancala board game

Mancala is a family of games comprising several versions and variants. One key characteristic is shared by all: picking up stones (or seeds) from pits in a board or surface and dropping them into other pits.

While there are many different mancala games, one of the most popular variants is the American-invented Kalah. This is what most people in the Western world think of when they hear the word “mancala.”

There are a few key mancala terms to know:

Other popular variants of mancala include Oware, which can be played on the same style board as Kalah, and Bao, which has a board with four rows of eight pits. Most boards are designed for Oware and Kalah. 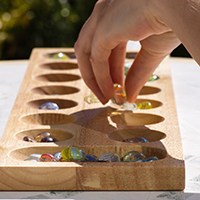 Did You Know?
The rules of various mancala games were passed down orally, which could be why there are hundreds of different versions.
Staff
BestReviews

These two popular variants use the same components, but their rulesets differ significantly.

Each player starts with 24 stones distributed evenly across their six pits. Players take turns scooping up all stones from one pit and dropping them one at a time in pits, moving counterclockwise from the first pit. If the last pit a player placed a stone in has two or three stones and is on their opponent’s side, all the stones are captured by the current player and placed in their store. If there are several pits in a row with two or three stones, all of them are captured.

Oware is generally more strategic and complex than Kalah, and players only ever take one turn in a row.

Invented by American designer William Julius Champion, Jr., in 1940, Kalah is set up exactly the same as Oware but has several gameplay differences.

Players take turns as they do in Oware, picking up the stones from one pit and distributing them one at a time counterclockwise, including in their own store (but not their opponent’s). However, if the final stone is placed in the player’s own store, the person may take another turn. If a player places their final stone in an empty pit on their own side, they capture this stone and any stones in the opposite pit on the opponent’s side.

Taking multiple turns in a row after setting stones up carefully makes for dramatic plays and a good amount of forethought. Games can be made shorter and simpler by starting with three stones per pit instead of four.

Ancient examples of mancala boards have been found from Africa to Asia, though the exact origins are still speculated.

The two main styles of mancala boards are folding and non-folding.

Folding boards are more common, and they are easier to transport due to their small form factor. They can also serve as storage for the stones, especially if a clasp holds the board shut. However, a board with poorly designed hinges may struggle to fully open. Further, it can be difficult to play on an uneven surface.

Non-folding boards are more cumbersome, but with no hinge or gap in the center of the board, they generally have a smoother appearance. They are often larger than folding boards, which results in larger pits that are easier to scoop stones out of.

What features do mancala board games have?

Mancala boards are made in a variety of styles, from simple to ornate. In addition, the board may be made of different types of wood or plastic, and stones come in many different materials.

Mancala board styles and materials

While the majority of mancala boards are unadorned, some have hand-carved or laser-cut designs to add texture and flair. A few have painted surfaces, which gives the wood a smooth finish. No markings are needed for gameplay purposes, but these designs can be eye-catching.

Most boards are made of wood, but the type of wood varies.

There are a few plastic mancala boards, usually designed for travel. These are lower in quality but are lightweight and inexpensive.

A finished mancala board has a smooth, usually shiny coat that ensures the pits are smooth to the touch and the stones slide out easily. Stained wood may or may not be finished.

Mancala stones come in a variety of materials. Ancient mancala boards may have used seeds or pebbles, and a few modern boards include seeds for an authentic mancala experience. Most of today’s boards use stones made of glass (in the form of half-marbles), polished stone (such as quartz or other minerals), or plastic.

Glass and stone both have a satisfying weight and sound as you drop them into the pits. Plastic feels cheap and lightweight, but it keeps the weight down in travel sets.

There’s no standard board size, but most range from 16 x 5 inches to as much as 30 x 8 inches. Because the stones are usually sizable, it’s not difficult to see pieces clearly on a small board. However, it may be awkward for large hands.

Folding boards with a clasp are less likely to open and spill stones everywhere. Mid-range and more expensive boards often include a bag for holding the stones, which is crucial if you opt for a non-folding board or a folding board that cannot hold the stones in its pits. Make note of whether the board can be stored in its original box or if you will need to come up with a storage solution. 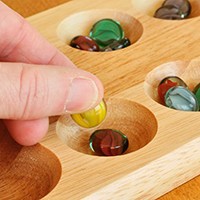 Did You Know?
Placing the stones (or seeds) in pits one after the other is also called “sowing.”
Staff
BestReviews

How much do mancala board games cost?

Though almost all mancala boards are wooden, they tend to be affordable and fairly similar in cost.

For $15 to $25 are plastic travel boards and small wooden boards. It’s not much of a price jump from plastic to wood, so you may find it worth the small cost to upgrade to wood. Boards in this price range can be quite small and awkward for adults.

Boards from $25 to $40 are medium to large in size and use higher-quality woods like rubberwood or oak. Sometimes, they have a stain. Extra features, such as clasps and bags, are often included.

The most expensive mancala boards cost from $40 to $70 and often have painted, laser-cut, or hand-carved designs. In some cases, they may be attractive enough that you want to leave them displayed on a coffee table. 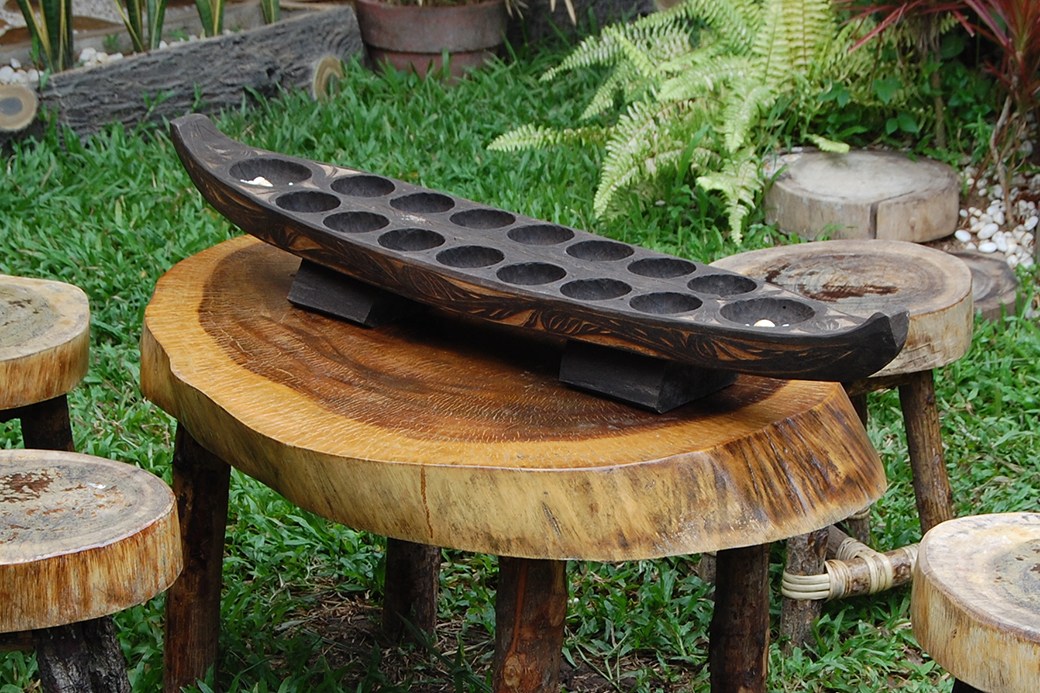 Mancala boards, particularly ancient ones, come in a variety of sizes and configurations, including large grids of pits and spiral-shaped series of pits.

A. Absolutely. Kalah is fairly simple to learn, and young children may even defeat an adult opponent from time to time due to the game’s many possibilities.

Q. Is there an advantage to going first in Kalah?

A. Yes. The first player is slightly more likely to win, especially if the players are of equal skill. It’s a good idea to let young children go first when playing against older children or adults. Kalah is a solved game, meaning there is an optimal first move.

Q. How long does Kalah take to play?

A. Most games last 10 to 15 minutes, ending when all of one player’s pits are empty. It’s easy to play until you reach the “best of three.”

A. Only two players can play on a traditional two-player board. However, four-player mancala boards are available and can be played with a Kalah variant.