The buttery taste and hint of Himalayan salt makes this ghee a crowd-pleaser.

The grass-fed cows that source this ghee come from New Zealand and eat the finest grass. This ghee remains spreadable at room temperature and goes great on toast and roasted veggies.

Few have complained that the ghee arrives as liquid upon shipment.

Sourced from grass-fed cows without any use of hormones. Features MCTs and vitamins A, E, and K. Lengthy shelf life. Compatible with Keto, paleo, gluten-free, and lactose-free diets. High smoke point. Solid value.

Lacks flavor; may not be appetizing to some consumers.

Unsurprisingly, Bulletproof's ghee is just the thing for your Bulletproof coffee.

This ghee is a vibrant color and has a light, creamy flavor. Aside from perking up coffee, this also goes well with sauteed veggies.

The grainy texture may bother some buyers.

Gold Nugget's ghee is a versatile chioce for cooking and baking.

Gold Nugget's ghee has strong caramel undertones. Its fresh, subtle taste is excellent for roasting veggies and cooking meat. Easy to spread. Rich in vitamins and nutrients, including vitamin D and omega-3s.

The strong caramel aroma of this ghee will entice you first. Some buyers said this ghee is good enough to eat right out the jar, and it's close in authenticity to Indian ghee.

A few people reported dairy-like reactions, though the ghee should be casein-free.

Ghee (rhymes with “me”) has not only been a dietary staple in India and the Middle East for thousands of years, it’s also an important part of the Ayurveda healing tradition, where it’s often used as the base for herbal medicinal preparations. But unless you cook a lot of Indian recipes or follow a paleo diet, it’s quite possible that you’ve never heard of this type of clarified butter. Once you learn more about ghee, however, you’ll certainly want to add this healthy and versatile cooking fat to your pantry.

While some cooks prefer to make their own ghee at home, most prefer the convenience of buying it ready-made. So, whether it’s your first jar or your twentieth, here is what you should know about choosing and using ghee, an ancient and yet suddenly trendy substitute for regular butter. If you’re ready to buy, take a look at some of our favorites, too. 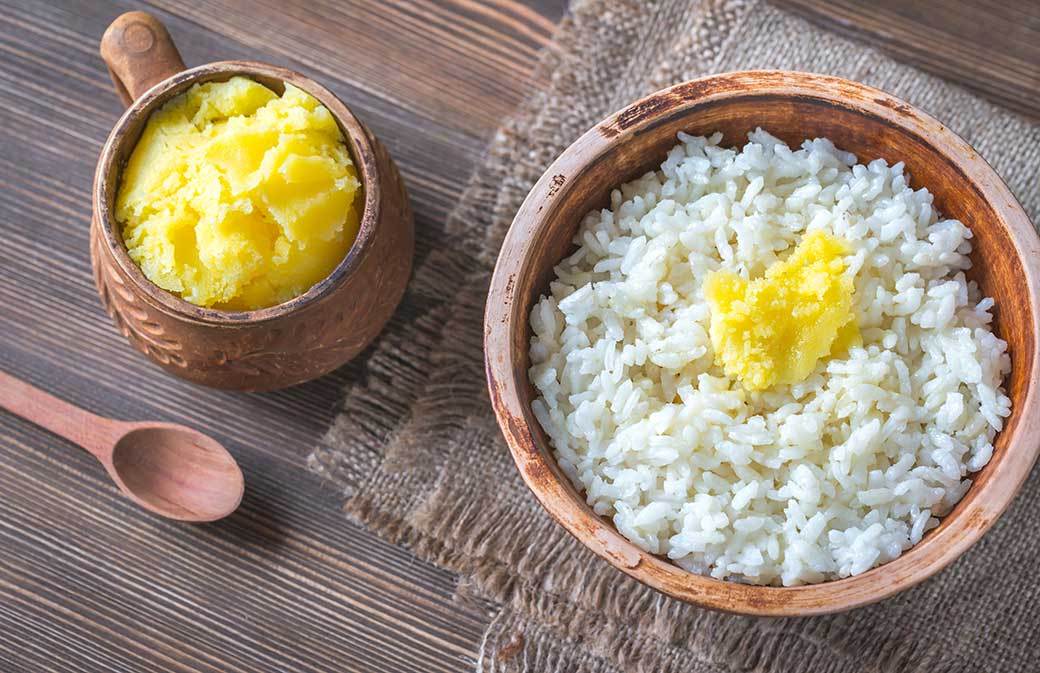 A staple of Indian cooking, ghee has been enjoyed throughout Asia and the Middle East for thousands of years.

Traditionally, ghee starts out as butter made from cow’s milk, although today you can also find ghee made from other types of milk. Gently simmering the butter over a low heat causes the milk solids to separate from the milk fat. The milk solids are then skimmed off and discarded, leaving behind clarified butter. Though the terms “ghee” and “clarified butter” are sometimes used interchangeably, true ghee goes a step further than clarified butter. To produce ghee, clarified butter is simmered longer, until all the moisture has evaporated and the milk fat takes on a carmelized, slightly brown tint and a somewhat nutty flavor. This is ghee. Like coconut oil, ghee is soft and spreadable when stored at room temperature and becomes more of a solid when refrigerated.

While you can use ghee in the same way as butter, there are a few differences between these two foods.

Calories: Ghee has slightly more calories than butter. As a general rule, a tablespoon of ghee has around 112 calories, while the same amount of butter contains 100 calories.

Smoke point: Ghee has a much higher smoke point than butter. The smoke point is the temperature at which a cooking oil begins to smoke, indicating that the oil is overheated. Butter begins to smoke at around 350°F, while ghee heats up to 485°F before smoking. That means ghee is more suited than butter to high-heat cooking methods such as panfrying.

Fat: Ghee has a bit more fat content than butter. A tablespoon of ghee has roughly 13 grams of fat, while an equivalent amount of butter contains 11 grams. In both, the fat is largely saturated, although ghee, being more concentrated, has more of the healthy short-chain saturated fats, as well as conjugated linoleic acid (CLA), which is said to help the body lose fat and gain muscle.

Lactose and casein. Ghee doesn’t contain lactose or casein. Because milk solids are strained away during the production of ghee, it has almost zero lactose. That means those with sensitivities to this milk sugar can generally use ghee without digestive upset.

Diet-friendly: Ghee is suited to a paleo diet. Because ghee has no milk solids, it’s the perfect butter substitute in a paleo lifestyle. It’s also a very popular dietary addition among those who follow Whole30 or keto eating plans.

Shelf-stable: Ghee doesn’t need to be refrigerated. While unsalted butter can turn rancid after a few days sitting on the kitchen counter, ghee, as long as it’s stored in an air-tight container, remains fresh for up to three months at room temperature. It will last up to a year if you store it in the fridge but remember that it hardens when chilled.

Did you know?
Even people with lactose intolerance can enjoy ghee thanks to its lack of milk solids.
STAFF
BestReviews

You can generally find ghee near the butter in supermarkets and health food markets. The best ghee is organic and made from the milk of grass-fed cows. Some Indian brands of ghee are made with buffalo milk, which has a much higher fat content than cow’s milk and isn’t considered as healthy as cow’s milk in the Ayurvedic tradition. Also, watch out for imported brands of ghee that are made with vegetable or palm oil; these products lack the health, taste, and cooking benefits of real ghee.

Choose ghee in a glass container with a tight screw-on lid, because this will stay fresh longer than ghee in a plastic container with a snap-on lid. And unless you use a lot of ghee on a regular basis, stick with a bottle in a size you can finish within a few months so you don’t need to worry about the oil turning rancid.

As a general rule, ghee is quite a bit more expensive than butter. Expect to pay between $10 and $20 for a 16-ounce bottle of organic ghee made from grass-fed cow’s milk, which is considered the most desirable type. By contrast, a pound of butter is typically around $5. While you might find less expensive ghee, it probably won’t be organic and from grass-fed cows.

Other uses for ghee

While you’ll probably use your ghee mostly for cooking, it also deserves a place with your beauty products. Like coconut oil, ghee is a marvelous moisturizer for dry or chapped skin. Smooth a small layer over your face before bedtime, and you’ll wake up to a smoother, softer, healthier complexion. Or rub it into your lips to treat chapping.

Ghee also works to improve the look and feel of dry, damaged, or frizzy hair. Rub it into split ends and your scalp, or make a hair mask by mixing equal parts ghee and olive oil, massaging it into your hair, and letting it sit for 10 to 20 minutes. Wash the ghee away with a gentle shampoo, and you’ll find your hair is shinier, smoother, and healthier. 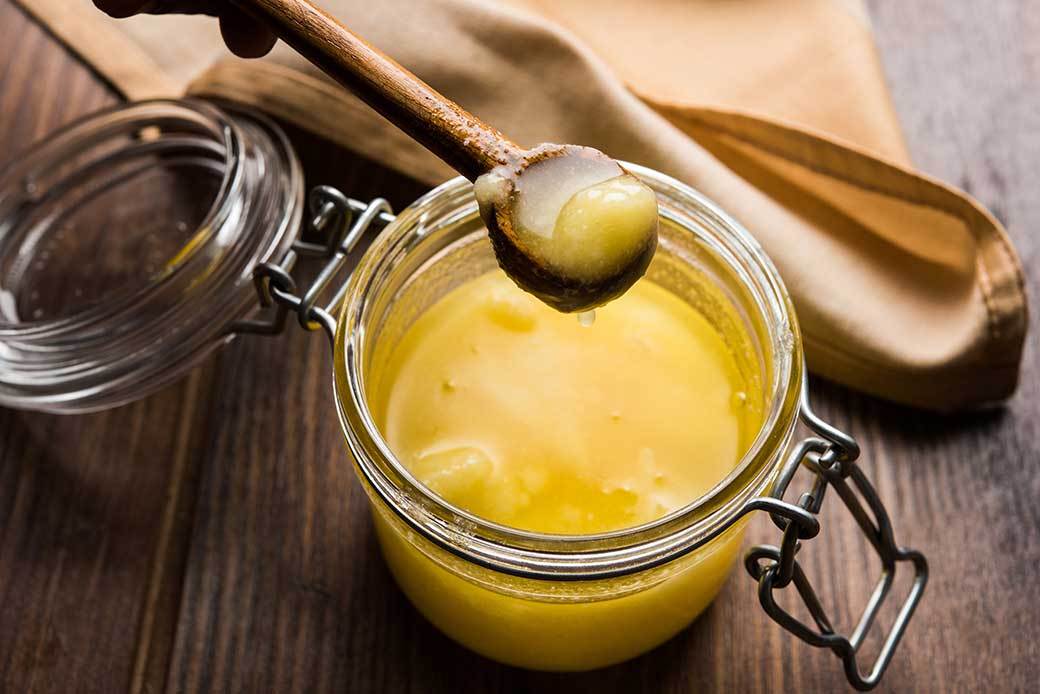 Ghee is loaded with healthy fats and vitamins, including vitamins A, D, E, and K.

Q. Does ghee taste like butter?
A. Ghee tastes like a nuttier, richer version of butter. While many people love it at first try, for others, ghee is more of an acquired taste. If you find the flavor a bit strong for your liking, stick to using your ghee in curries or other highly flavored dishes rather than spreading it on toast or baked goods.

Q. Is it better to buy plain or seasoned ghee?
A. While authentic ghee does not have additional spices or flavorings, you’ll find a wide variety of ghee brands that do include spices, including vanilla, Himalayan pink salt, garlic, turmeric, bay leaf, and even chocolate. Though plain ghee is far more versatile, you might appreciate the convenience of having an already seasoned ghee on hand for favorite dishes or quick cooking. Of course, there’s no reason not to have two or more bottles of ghee in your pantry: one plain and the others seasoned.

Q. Can I spread ghee on toast like butter?
A. Absolutely! Ghee makes a healthy and tasty spread not only on toast but also on sandwiches in place of butter or mayonnaise, on pancakes and waffles, and on bagels and muffins. 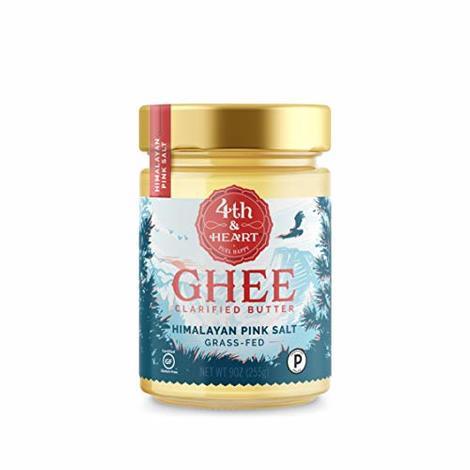 The buttery taste and hint of Himalayan salt makes this ghee a crowd-pleaser. 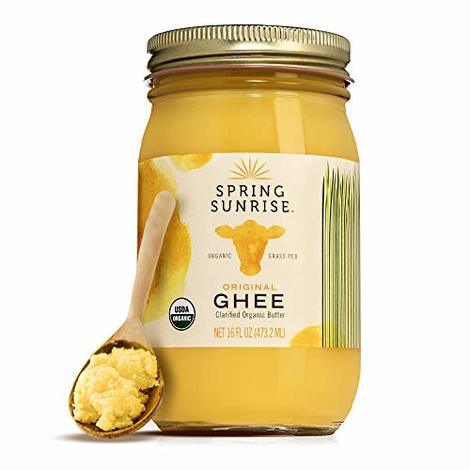 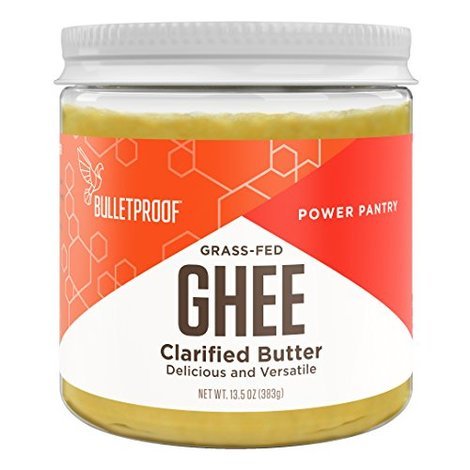 Unsurprisingly, Bulletproof's ghee is just the thing for your Bulletproof coffee. 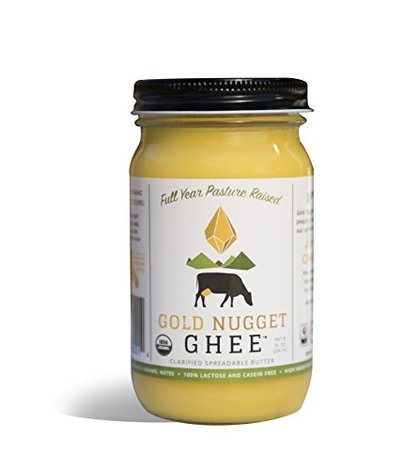 Gold Nugget's ghee is a versatile chioce for cooking and baking. 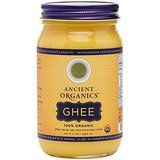