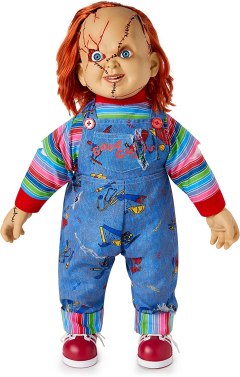 This frighteningly accurate horror doll has scars and stitches all over its menacing face.

An officially licensed Chucky doll that doubles as a Halloween decoration. The doll's tattered skin, thin red hair, and signature outfit are pulled straight from the movies. Customers praise the design quality and attention to detail.

Doesn't talk or come with a doll stand. 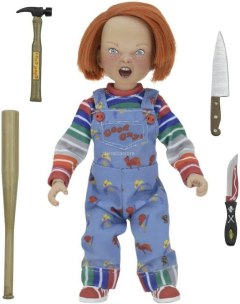 A detailed and fully-posable action figure with several weapons to choose from.

A scary 5.5-inch action figure based on the original 1988 film before the signature battle scars. Doll comes equipped with a baseball bat, 2 knives, and a Good Guy hammer. Fabric, clothing, and rooted hair add air of miniaturized authenticity.

Fragile doll may work better as a decoration than a child's toy. 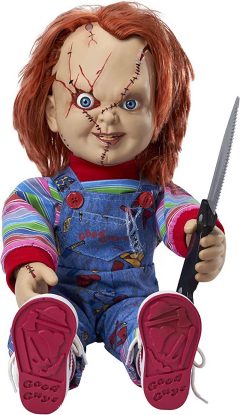 He talks, smirks, and wields a scary knife like the movie, but this one isn't going to chase you down.

This battery-operated Chucky Doll has a slash across his face and red hair. Mouth moves when it says one of 7 different phrases from the films. Animatronic features make it a spooky decoration for your home. Includes AAA batteries and a removable knife.

Doesn't stand up on its own. 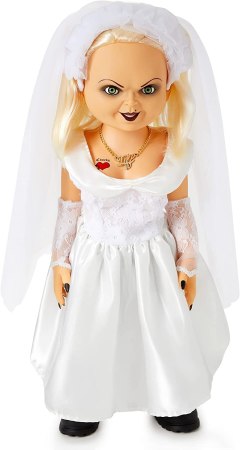 Be the 'Bride of Chucky' with this well-detailed collectable doll.

Doesn't stand on its own, White dress gets dirty easily. 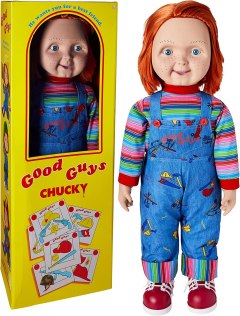 An unscarred version of the Chucky Doll direct from "Child's Play 2".

Clean-cut Good Guys doll with clean red hair, no scowl, and an unsettling smile. At 30 inches tall, it's one of the tallest Chucky dolls available. Comes in box just like the one from the movie.

Child’s Play isn’t the first movie, TV show, or story about a killer doll, but it’s definitely the best known. The franchise’s main character, Chucky, has frightened horror and non-horror fans for years, so many Child’s Play devotees want their very own Chucky doll to keep the scares going.

Chucky dolls are available in a wide array of styles and sizes. Some closely resemble the doll from the first film, while others depict the scarred, battle-worn Chucky of the later movies. You can find plush and action figure Chucky dolls. Some other characters from the films also have dolls, so you can complete the set if you so desire. These dolls are all excellent display items or collectibles for fans of the Child’s Play movies, but they can also make fun Halloween decorations, even if you aren’t a fan.

Start by deciding which Chucky character you prefer, as well as what type of doll you want. You also have to choose the right size and special features, such as the accessories that come with the doll. This shopping guide can help you better understand your options, while the included product recommendations make it even easier to identify the best Chucky doll for your collection. 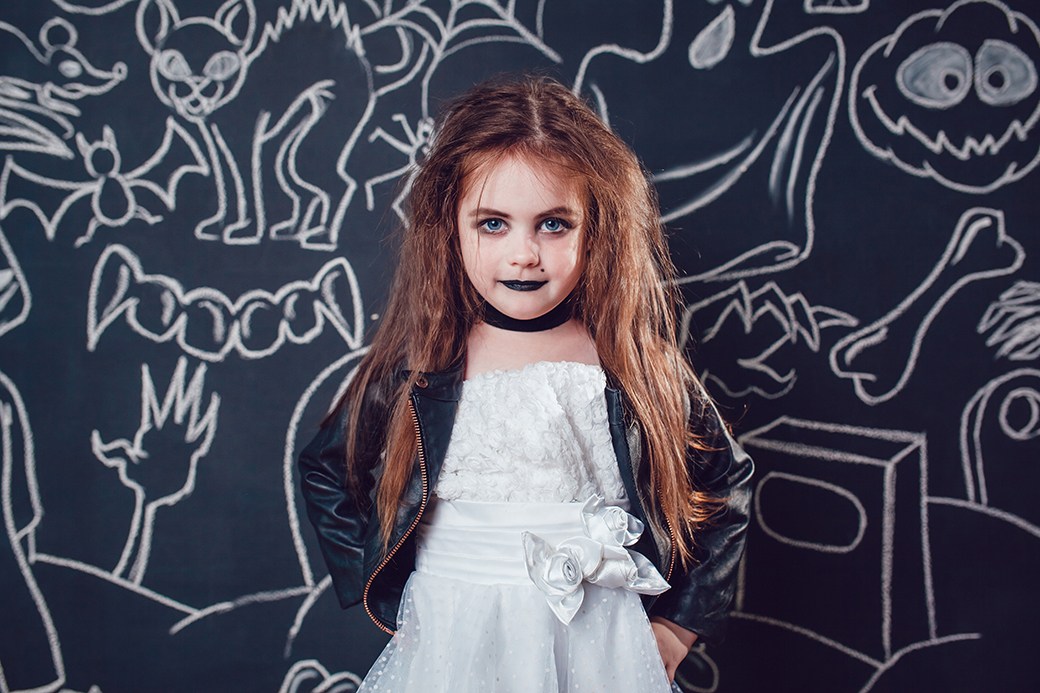 The Child’s Play franchise was created by Don Mancini, who wrote the first seven movies and directed several of them. He also created the Chucky TV series.

How to buy the best Chucky doll

Chucky is the main character and villain from the Child’s Play franchise, which includes eight films and a TV series. Since the first movie Child’s Play in 1988, Chucky has been one of the best-known horror icons, alongside Michael Myers from the Halloween franchise, Jason Voorhes from the Friday the 13th series, and Freddy Kreuger from the Nightmare on Elm Street franchise.

The character is introduced as a notorious killer who transfers his soul into a doll in the first film. Chucky then spends the rest of the movies and series trying to transfer his soul back into a human body. The doll that Chucky’s soul inhabits is a fictional “Good Guy” doll, based on the Hasbro “My Buddy” dolls from the 1980s. As a result, Chucky has a similar look. He is known for his shaggy red hair, large blue eyes, and freckles. In addition, he usually wears a long-sleeve striped T-shirt, blue overalls with red buttons, and tennis shoes.

When shopping for a Chucky doll, you can choose from a few different versions, as well as other characters from the Child’s Play franchise.

The most common Chucky Doll options include:

Some Chucky dolls are extremely high-quality and resemble movie props. These dolls are the most expensive ones you can buy.

What features do Chucky dolls have?

Depending on the look you prefer, Chucky dolls are available in several different types.

Chucky dolls vary in size based on the type and style. Action figures, bobbleheads, and stuffed dolls are typically on the small to medium side, with action figures usually the smallest.

Some Chucky dolls are equipped with a battery-powered voice box. They usually repeat famous lines or phrases from the films and make an excellent gift for Child’s Play fans.

Many Chucky dolls come with accessories that complete the character’s look. In most cases, this includes a small plastic knife or another weapon. 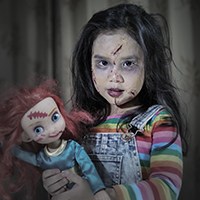 Did You Know?
The Chucky dolls used in the first three movies were actually puppets that required nine people to operate.
Staff
BestReviews

How much do Chucky dolls cost?

The most affordable Chucky dolls are action figures, bobbleheads, and small stuffed dolls. These dolls generally don’t have many special features, but some come with accessories, such as a knife and/or other weapons. These Chucky dolls cost $15 to $49.

Mid-range Chucky dolls are partially articulated and multi-articulated Chucky dolls. These dolls can be as large as 25 inches tall and often come with accessories, including a knife and other weapons. These Chucky dolls cost $50 to $170.

The most expensive Chucky dolls, ranging from $170 to $599, are usually multi-articulated or fully articulated Chucky dolls. They may be as tall as 30 inches and come with accessories like weapons. Some of these dolls also have special features, such as the ability to talk.

In addition to Chucky dolls, you can purchase empty boxes akin to the “Good Guy” boxes from the movies. 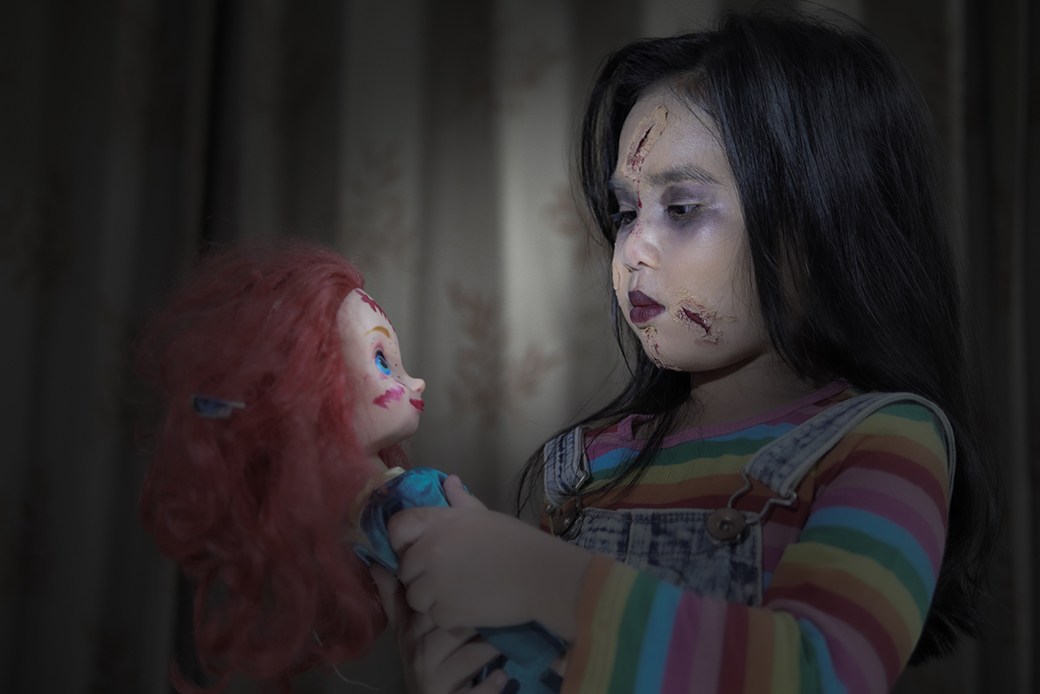 In the first seven movies and the Chucky series, Chucky was voiced by actor Brad Dourif. Actor Mark Hamil voiced the character in the 2019 film reboot.

Q. What ages are Chucky dolls appropriate for?

A. It varies from doll to doll. Some come with small pieces that may be a choking hazard for small children. It’s also important to consider that Chucky is a character from a series of R-rated horror films. As a result, you may not feel comfortable allowing children to play with them. These dolls are usually meant for adults who are fans of the Child’s Play movies and want to keep them as collectibles.

A. It depends on the type of doll you choose. Dolls made of vinyl or plastic can be wiped down with a damp cloth if they’re dirty, as can cloth and stuffed dolls. If dust accumulates on the dolls, use a duster, hand vac, or a can of compressed air to remove it.

A. It’s a matter of personal preference. Some fans like to keep them out on their desk or bookshelf, where they can enjoy the collectibles on a daily basis. If you want to keep your dolls in the best condition possible, you probably want to keep them in a display case. Cases with glass-paneled doors protect the dolls from dust, dirt, and other debris, but you’ll still be able to see and enjoy them.